"Wallace and Gromit" creator Nick Park talks about his Oscar nomination, nutty inventions and jokes that Yanks don't get. 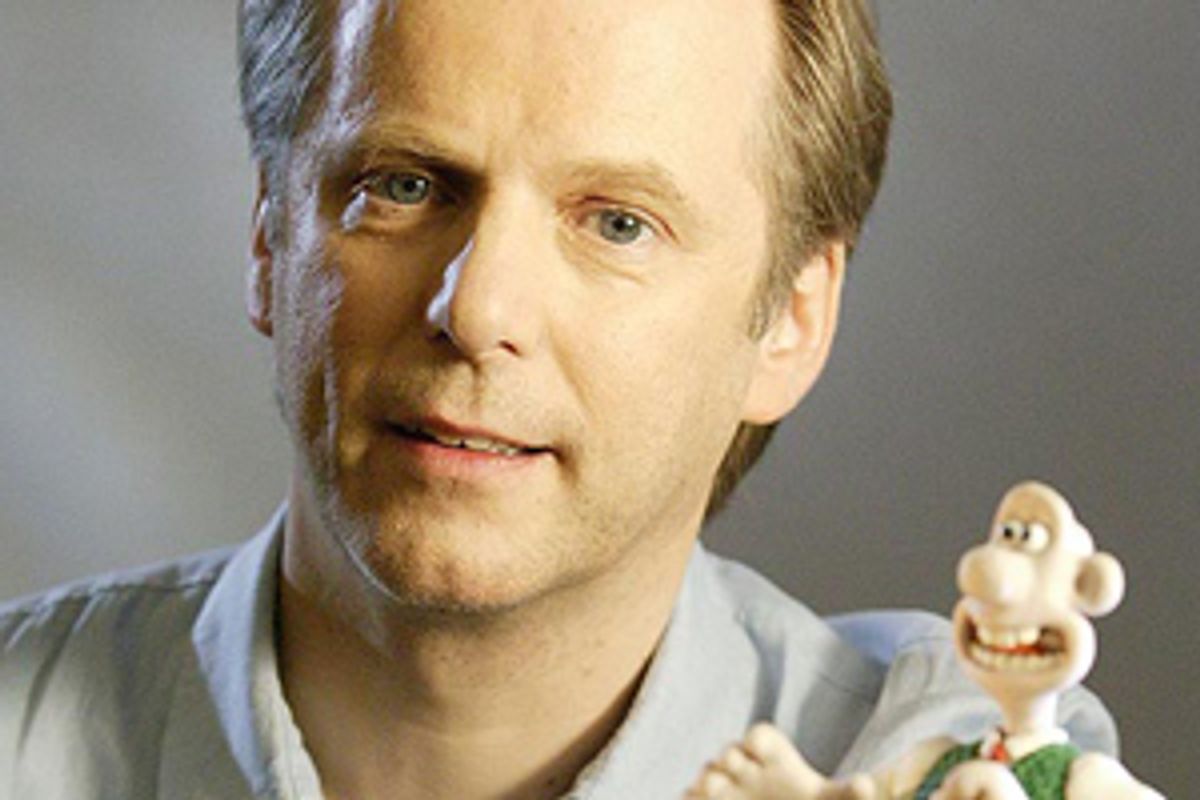 In a year full of big blockbusters and heavy message films, "Wallace & Gromit: The Curse of the Were-Rabbit" offered audiences something altogether different: pure fun. The claymation confection starring a quirky cheese-loving inventor and his mute but remarkably expressive dog emerged not just as an Oscar contender, but also as the best-reviewed movie of 2005. The second feature-length film from writer/director Nick Park (the first was 2000's exuberant "Chicken Run"), "Were-Rabbit" scored a 95 percent positive rating with critics, according to an amalgamation of the film's reviews compiled by RottenTomatoes.com, which ranks films based on their critical reception. Its competitors for the Academy Award for best animated feature, Hayao Miyazaki's "Howl's Moving Castle" and "Tim Burton's Corpse Bride," earned 84 percent and 83 percent approval from critics, respectively. Salon's Stephanie Zacharek called "Were-Rabbit" "85 minutes of bliss."

Park, 47, who created Wallace and Gromit while studying at the British National Film and Television School and joined the Bristol, England, stop-motion animation company Aardman Animations in 1985, first introduced the lovable clay duo in the short film "A Grand Day Out." That film was nominated for a best animated short Oscar in 1991, but was beaten out by another Park creation, "Creature Comforts." Park has also collected Academy trophies for two other Wallace and Gromit shorts, "The Wrong Trousers" (1993) and "A Close Shave" (1995). (And he's the man behind Peter Gabriel's landmark "Sledgehammer" video.) This year's nomination for "Were-Rabbit" is Park's first for a feature-length film. (Click here to see Park's short "Shopper 13," which originally aired on the BBC.)

Park recently spoke with Salon over the phone from Aardman's headquarters in Bristol.

You've called shorts "frustrated feature films." How did it feel to move from the short format to a feature film with "The Curse of the Were-Rabbit"?

We were always very involved with the characters, and it was liberating to get to do so much with them. We started with an idea that demanded to be made. I think whenever you're doing a feature it has to be something that you really are passionate about. It's got to last a good five years in your head.

Do you find it difficult to work with the same characters for such a long time?

No, they're a pleasure to work with. The great thing about having characters that are established is that they sort of start to write themselves. And I think the dynamic -- the smart dog and the not-so-smart man -- brings its own kind of comedy all the time. With [co-director] Steve Box and myself, we sit down and think of an idea, and automatically a whole bunch of jokes become inevitable. Because once you know the characters, there's an exchange between them -- like working with Laurel and Hardy.

Do you think you'll make another Wallace and Gromit feature film?

I haven't ruled it out. I think, having spent such a long time with them, it's slightly difficult having to go straight into another one. But I always think of coming back to them at some point. It might be soon; it might be not so soon. I think of them all the time, though. I can't help but think of new things for them.

Last fall, a fire broke out at Aardman Animation's warehouse in Bristol, destroying a lot of the sets and props from your films. How are you dealing with the loss of so much material?

What got destroyed were the original sets -- the history of Aardman, really. "Wrong Trousers," "A Close Shave," "[The Adventures of] Morph" and the old commercials have gone. And a lot of other things -- drawings, sketches, storyboards from a lot of other projects. And in a way I was quite moved by how much news it made. It sort of said, "This is an important part of British film history." I never knew that was how it was being valued, so that was quite nice.

But you've got to move on, really. The sets were built for a purpose; they've had their use. They were lovely sets, and a lot of craftsmanship went into them, but we're always making new stuff, and the studio itself was not harmed, and no person was hurt, so we felt very lucky. And you've got to carry on. These things happen.

In "Were-Rabbit," the workings of the "Bun Vac" -- circling all the bunnies inside it -- would have been near impossible without CGI. Would you ever consider making a complete switch to CGI from clay?

It would be an interesting challenge, and I do think of it. But I just love clay. I just love the aesthetics that come with it. It suits the humor of Steve Box and myself. I've always loved working with chunky arms and chunky legs, big fat fingers.

Have you ever thought about doing more regular shorts, on television, or is the pace so slow that that's impossible?

Well, when you're in the middle of a four- or five-year-long feature project you long for the days of short films. You dream of it. With a feature every idea gets analyzed and analyzed -- how the whole flow works, the editing -- and all the jokes get unfunny if you're not careful. You're putting all your eggs in one basket. It becomes scary.

Do you come up with a lot of ideas that don't make it into the final cut?

Yeah, you always have a surplus. We probably used 10 percent of what we thought of in the movie. And so much has to fall away. It's quite painful. What was it Oscar Wilde said? "You have to learn to murder your own darlings."

How much do you base the behavior of your characters on your own behavior or that of people you know?

It tends to happen in a less deliberate way. My mother tells me I was very observant as a child. I was very quiet and used to watch people, and then go and draw, and she was always amazed at how observant the drawings were. But no, references don't tend to be that deliberate.

Where do you get your ideas for Wallace's creatively quirky inventions?

That is one of the most fun things to do in animation, actually, to think up these inventions. With this film, as we were writing, Steve and I were doing sketches of ideas all the time. The story is all to do with the comic nature of the invention. So you think of an idea, "Wallace needs to invent a machine that brainwashes bunny rabbits," and then you start to draw it, and then you have to think of how you shoot it and how it fits in with the overall story, so you keep changing it and swapping things around and building mock-ups. It's a lovely thing about model animation, that you can build these things -- and they can actually work -- without any technical knowledge. [Laughs] You can be an inventor.

Were you worried about the cultural references and humor translating to an American audience? Were there any Briticisms that an American viewer might not get?

I counted only three, actually, in the whole movie. Americans tend to get most of it because a lot of it is universal. But, for example, in Wallace and Gromit's kitchen, there's a refrigerator with the word "SMUG" on it, and a big make in the U.K. is "SMEG." I thought that was a German make that was worldwide, but it isn't -- people in Europe don't laugh either -- it's just U.K. And also, people laugh because, if you have one of these fridges, kind of big designer fridges, they make you look very smug. [Laughs] Also, we have a glamour magazine here, it's all about celebs and what they're wearing, Hello magazine. And Wallace is from the North of England, where another way of saying hello is "Ayup." So we called the magazine "Ayup." People got it in the U.K. Also, when Gromit is in the van, he tunes the radio in very briefly to Art Garfunkel's "Bright Eyes," which is the theme from the film "Watership Down," which is all about rabbits. That got a big laugh in the U.K., where the song was a big hit.

You've paid homage to Hitchcock, "The Great Escape," now old werewolf horror films. Are there any other film genres that you'd like to send up?

Well, that's the challenge, I think, in a new movie -- to think where haven't we been before, what else is there to plunder?