As Americans finally begin to grasp the magnitude of the Iraq catastrophe, Bush's popularity hits a new low. 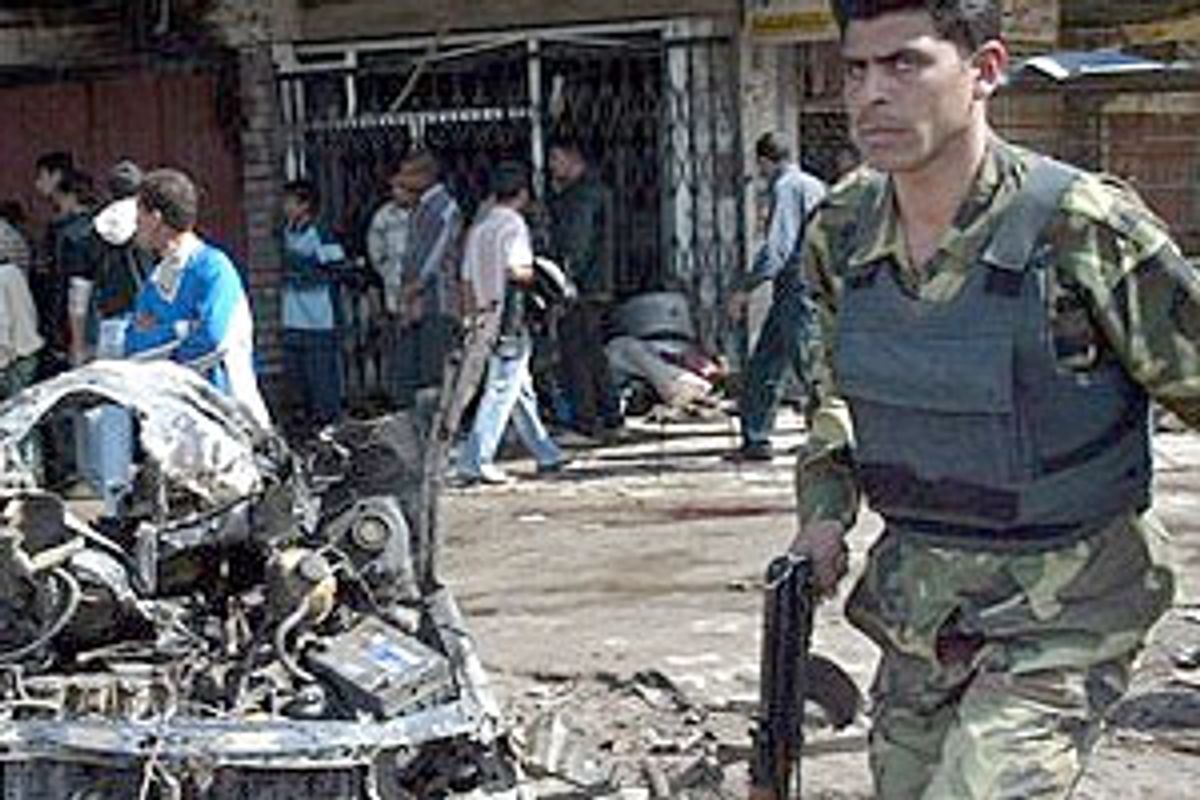 The catastrophe in Iraq, the scope of which is now apparent to even the most disengaged observer, and his mishandling of the Dubai port issue have sent President George W. Bush's public approval ratings to the lowest of his presidency. According to a Reuters poll, only 34 percent of Americans believe he is doing a good job overall. Only 30 percent, less than a third, think he is managing the Iraq situation well. A remarkable 72 percent of American troops polled in Iraq think the U.S. should leave Iraq within the next year. Nor is there any hope for Bush on the horizon. The bloody events in Iraq have undermined American authority in that country and in the Middle East more generally. The Shiite clergy of Iran and Iraq have bolstered their own authority at Bush's expense. This development has already severely limited his scope of action in Iran, and will doubtless have many other negative consequences in the months and years ahead.

Tactically, strategically and politically Bush now finds himself in the worst of all possible worlds. With Americans increasingly fed up with the Iraq debacle, he needs to start drawing down troops soon, but he can't do it while the country teeters on the brink of civil war. If civil war does break out, a U.S. withdrawal will look even more like cutting and running -- under these circumstances, not even Karl Rove will be able to figure out a way to get away with simply declaring victory and going home. Yet if American troops stay, they have no good options either. The U.S. desperately needs to keep the Sunnis in the government, but if Shiites launch reprisal attacks against Sunnis, Americans will not be able to respond for fear that the Shiites, too, will turn on them -- as indeed they have already begun to do. And as the shrine bombing shows, Iraq is a vial of nitroglycerine that can be set off with one shake. Imagine what would happen if one of the leading clerics, Sunni or Shiite, was assassinated. It is difficult to say how aware Bush is of the reality in Iraq, but some part of him must be cursing the day he decided to invade it.

Iraq has just lived through its worst week since the U.S. invasion. The blood bath in the aftermath of the destruction of a major Shiite shrine has taken more than 1,300 lives, as enraged Shiite mobs attacked Sunni mosques, burning some to the ground, and killed many Sunnis. (A proportional number of deaths in the U.S. would be 15,000 -- more than the number of U.S. troops who died in D-Day and Okinawa, the Pacific theater's bloodiest battle, combined.) After a weekend daytime curfew, the country appeared to step back from the brink on Monday, but on Tuesday guerrilla violence, including the car-bombing of a mosque, killed 60 and wounded three times that many. It seems clear that the guerrilla tactic of provoking sectarian civil war was on the verge of succeeding last week, and Tuesday's events suggest that time may well be on the side of the guerrillas.

Supreme Jurisprudent Ali Khamenei, Shiite Iran's theocratic ruler, blasted the Americans over the destruction of the shrine, saying that they had blown it up in conjunction with the Israelis. The implausibility of the charge did not prevent it being taken seriously by Shiite crowds and protesters from Beirut, Lebanon, to Karachi, Pakistan. For the Shiite clerics, Islam is a form of soft power that they can deploy against the United States at will. Virtually any bad thing that happens to Muslims or their holy places is laid at the feet of the Americans. This "paranoid style" in Middle Eastern thinking about the West has a long history, but the Iraq war has been interpreted as evidence that the conspiracy theories were correct all along, and had made this way of thinking more widespread and powerful. Khamenei said on Monday, "The Americans are trying to provoke ethnic and religious war in Iraq and the tragic incident in Samarra is one instance in this regard." He said that Iraq is symbolic of American failure in the region, and went on to call for Muslim states to support the militant Palestinian group Hamas, which won the recent elections.

More momentously, Khamenei's rival, Grand Ayatollah Ali Sistani of Najaf in Iraq, also appears to be losing confidence in the Iraq situation. Sistani's restraint until now has been the key factor in keeping sectarian strife from boiling out of control. But he responded to the destruction of the golden-domed Askariyah Shrine at Samarra by calling for peaceful demonstrations -- a reckless move from a man known as cautious and moderate. Sistani had to know that there was little chance in the emotionally overwrought atmosphere of those days that any big demonstrations would remain peaceful. He appears to have been under enormous pressure to authorize the rallies, risking being seen as soft on Sunni terrorism if he had stuck to his previous pattern of asking believers to refrain from any reaction at all.

Worse, Sistani signaled his loss of confidence in the Iraqi government and in U.S. troops by calling for tribal levies to guard Shiite shrines and personalities. The clans of the Middle Euphrates are devoted to Sistani, and rural young men who know how to use a gun are eager to obey the grand ayatollah and to risk their lives for their faith. Iraq already suffers from a surfeit of religious militias, however, and the addition of a new one is hardly a good sign.

Another Shiite clerical leader, Abdul Aziz al-Hakim of the Supreme Council for Islamic Revolution in Iraq, blamed U.S. Ambassador Zalmay Khalilzad for the bombing of the shrine and its sanguinary aftermath. Al-Hakim's SCIRI controls the Ministry of the Interior, which has charge of Iraq's police force. Many feel that the SCIRI militia, the Badr Corps, trained in exile by the Iranian Revolutionary Guards, has infiltrated the special police commandos fielded by Interior against the Sunni Arab guerrillas. The force has been found to keep secret jails and to engage in torture. The Sunni Arabs have been demanding that the hard-line Shiite party give up control of Interior, to no avail. Khalilzad was attempting to convince the Sunni Arabs to join the government, and understandably sided with them on the undesirability of the Badr Corps paramilitary providing so much of the manpower. Now, after the explosion at the beloved shrine of Samarra, no Shiite politician could agree to give up a key cabinet post concerned with security.

Yet another Shiite clergyman, the fiery young nationalist Muqtada al-Sadr, called for Sunni-Shiite unity and forbade his followers from wearing their usual provocative black costumes. His followers were thought to be responsible for many of the attacks against Sunnis and Sunni mosques, but Muqtada avoided the blame for these excesses. He had been abroad when the violence began, and immediately called for joint Sunni-Shiite marches and worship ceremonies to underline Iraqi unity. Along with the Sunni Arabs, he also called on the U.S. to withdraw from Iraq on a short timetable, and urged that this call be a key theme of the joint worship sessions.

Muqtada told a crowd in the southern port city of Basra on Sunday, "I call for a united, peaceful demonstration in the capital, Baghdad, which you will organize at a specific time, involving Shiites, Sunnis and others, in which you will demand the withdrawal of the occupying forces, and call for mutual love among you." On Monday, such a cross-sectarian Friday prayer service was held in Tikrit, to which Sunnis and Shiites flocked from all over the province.

These three Iraqi clerics all employed their influence and authority among the Shiite rank and file to make the Samarra bombing work for them politically. Sistani expanded his militia and stayed at the forefront of the movement by encouraging peaceful rallies. Abdul Aziz al-Hakim used the explosion in Samarra to bolster his own authority. He remonstrated with the American ambassador, saying it was not reasonable to expect the religious Shiites, who won the largest bloc of seats in parliament, to give up their claim on the ministry of interior, and that, indeed, Khalilzad had helped provoke the troubles with his assertions to that effect earlier. Muqtada al-Sadr used the incident to push for a U.S. withdrawal from Iraq, something he has wanted since the fall of Saddam. Abroad, Supreme Jurisprudent Khamenei blamed Bush and his Israeli allies, a monstrous charge but nevertheless one widely believed.

For the first three years of this colossal misadventure, Bush and his political advisors were able to obscure Iraq's harsh reality beneath a smoke screen of anti-terrorist fearmongering and patriotic fervor. But the smoke is blowing away. Bush emerged from this bloody week much feebler than ever before, both with regard to the U.S. public and with regard to that of Iraq. The problem for him is that Iraq has several more shrines, and if they are destroyed, he will again face the prospect of popular turbulence, and possibly calamity. Iraq, drifting toward theocracy and something approaching civil war, looks less and less like a model for the region, and more and more like an albatross around the neck of the Republican Party.