Bruce Willis may be the star of this sturdy cop thriller, but it's Mos Def who runs off with the film. 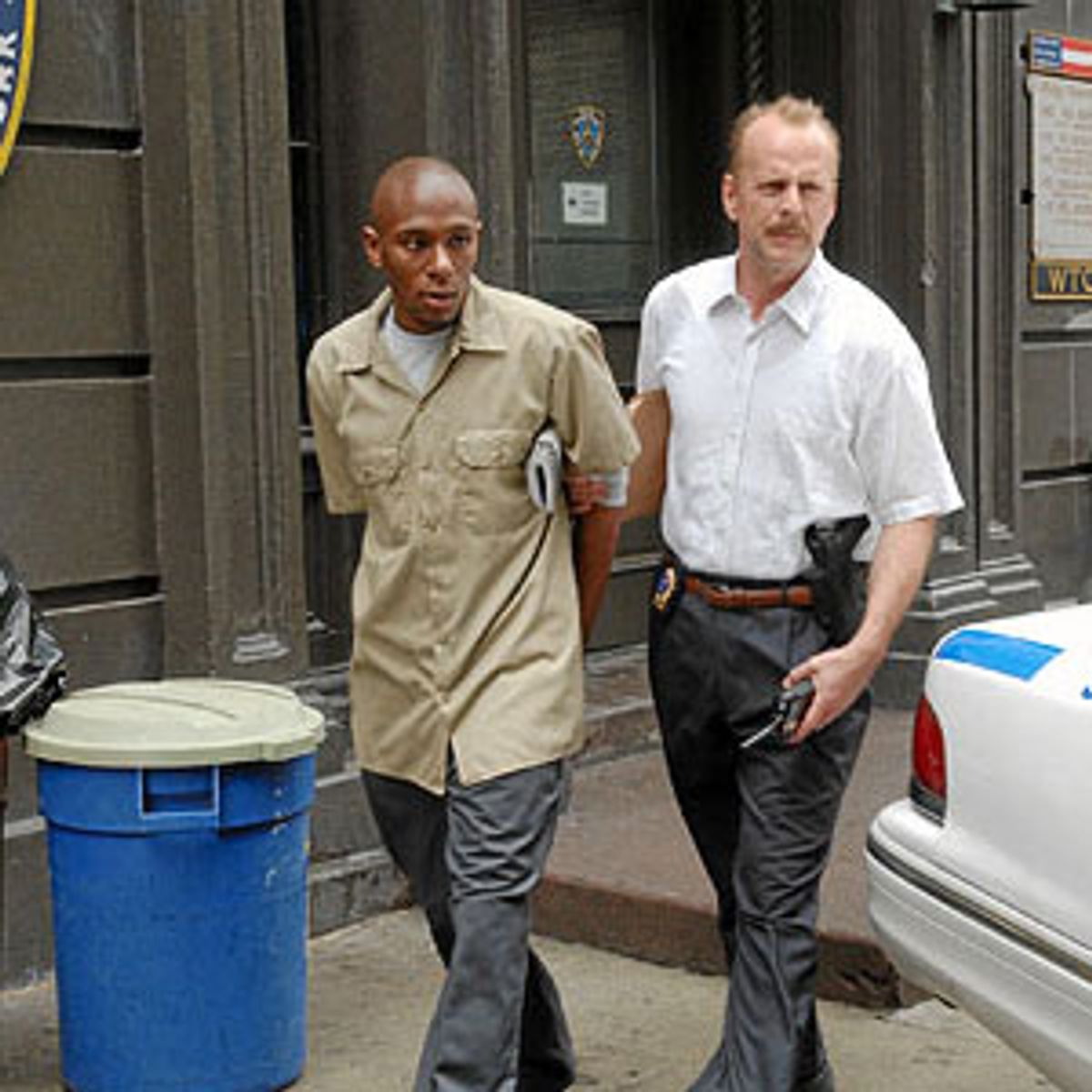 MOS DEF as Eddie Bunker and BRUCE WILLIS as Jack Mosley star in Alcon Entertainment and Millennium Filmsâ action thriller â16 Blocks,â also starring David Morse and distributed by Warner Bros. Pictures. PHOTOGRAPHS TO BE USED SOLELY FOR ADVERTISING, PROMOTION, PUBLICITY OR REVIEWS OF THIS SPECIFIC MOTION PICTURE AND TO REMAIN THE PROPERTY OF THE STUDIO. NOT FOR SALE OR REDISTRIBUTION.
--

Bruce Willis is almost unrecognizable when he first shows up in Richard Donner's "16 Blocks": When I saw this world-weary guy lumbering into the frame, with a paunch and a grizzled U-shaped hairline, I automatically assumed it was one of those ubiquitous fine journeyman character actors whose name I just couldn't put my finger on.

But this was Willis, playing Jack Mosley, an alcoholic detective with a bum leg and a brow that's perpetually furrowed in defeat. Willis is a terrific actor, not least because he's always known how to make even cartoonishly written action heroes seem believably vulnerable. What he does in "16 Blocks" is fascinating, although it's a performance that's perhaps more admirable than it is good. Jack is one of those worn-down cops who's kept on the force largely out of loyalty and sympathy; he barely even attempts to hide his drinking, although he's not in danger of losing his job as long as he keeps a low profile and stays out of trouble. But one morning, just as he's about to end his shift, his boss charges him with what should be a simple task: Jack needs to drive petty criminal Eddie Bunker (Mos Def) from the jailhouse to the courthouse, where he's expected to testify before a grand jury. Driving 16 blocks in New York City traffic could take 15 minutes, or it could take 40. But either way, Jack should be having his breakfast swig within an hour.

Of course, there are complications, largely involving Jack's ex-partner Frank (David Morse), and to describe them in any detail would give away too many of the modest pleasures of "16 Blocks." This is a sturdy little cop thriller, and even when it stretches the bounds of plausibility, you go with it, partly because you believe -- almost against your better judgment -- in what the characters are doing. (The script was written by Richard Wenk.) And even when "16 Blocks" veers into territory that's overly conventional, Donner throws in some interesting touches.

For one thing, he's in tune with the ways in which a wild, overgrown city like New York can also be a place of surprising kindness: In one sequence, a cop watches warily as Eddie stands outside the subway turnstiles, begging for someone to swipe him through with his or her Metrocard -- he doesn't have money for the fare, and he needs to get on a train, fast. Just when we think the cop, who is black, is about to nab Eddie, just to throw his weight around if nothing else, he instead opens the gate to let him through. In another scene, Eddie bangs on the door of a decrepit apartment in Chinatown -- some bad guys are after him, and once again, he needs to get away, fast. Just as we're snickering at the extreme unlikelihood that a Chinatown resident would even dream of opening his home to an anxious-sounding African-American, the door is unchained by the frail, elderly Chinese gentleman inside -- an act that's symbolic of the way the city sometimes miraculously opens up to us, usually right when we've decided it's conspiring to destroy us.

The biggest problem with "16 Blocks" is that it just isn't open enough to let its actors breathe. Willis has a few big scenes, where he gets to deliver speeches that are carefully written to be heart-rending. But he's much better in his smaller, more casual scenes. He never lets us forget how much weight he's carrying around on his stooped back, but we still understand why he must have once been a great cop: Even from within his alcoholic blur, he knows what's going on around him every second.

And Willis shows no vanity here. We often hear about how hard it is for aging actresses to land good parts; men have it easier, but not by much. Instead of trying to fool us into thinking he's younger than he is, Willis, in "16 Blocks," rushes the aging process: He'd rather have us believe he's a little older. Willis, a hardworking actor who's had plenty of hits, can afford to take that kind of risk, and yet there are plenty of actors in similar positions who'd hesitate to do so.

Willis is the undisputed star, but there's not much he can do to keep Mos Def from running off with the picture. (Def also appears, as himself, in another movie opening this week, Michel Gondry's extraordinary concert film "Dave Chappelle's Block Party.") Def is a marvelously expressive actor, and what he does with Eddie -- who is in many ways a stock character, the career criminal who's yearning to go straight -- only begins to hint at what he's capable of.

Eddie at first seems perhaps a little slow, or at least just wacky. In his first scene he's nattering on about the gray suit he's supposed to wear to court that day, and how he can't leave his cell until it arrives. Later, when Jack gets caught in traffic, Eddie, who absolutely cannot be late for his court date, complains incessantly, wondering aloud why Jack can't turn on the siren. "Use your police power," he urges. Not long after, when Jack locks him in the car to make a quick liquor-store run, Eddie mutters about his stroke of bad luck in getting Jack for a driver: "I knew this dude smelled funny; I got the wrong dude, man."

This is just the beginning of Eddie's drawling stream of patter, which sounds nutty only until we begin to realize that it all makes perfect sense. Eddie doesn't want to be a criminal; he wants to move to Seattle and open a bakery, making cakes for little kids' birthday parties. He learned how to bake in jail, and everywhere he goes, he carries with him a notebook full of clipped recipes.

At one point in the movie, during a particularly stressful and dangerous situation, Eddie takes it upon himself to calm a little Asian girl. He asks when her birthday is, and when she tells him, he opens his book and shows her the cake he'd choose for her. It's a strawberry-flavored cake in the shape of a fan -- "like a Chinese fan," he clarifies, just so the girl will get the full effect of the confection that's shaping up in his imagination. This is one of those crazy, potentially overly sentimental moments that almost has you rolling your eyes before it even begins. But I was rapt by what Def was doing, and I knew how far into this character he'd gone.

Mos Def may someday be a big movie star, or maybe he'll simply be a consistently wonderful actor, one of those people you always look forward to seeing. For now, at least, he's getting bigger and more visible roles. He's far too good to be acting in the margins.