Forget the red-state, blue-state divide. In Chappelle's world, there's only one America, and it's big enough to include everybody. 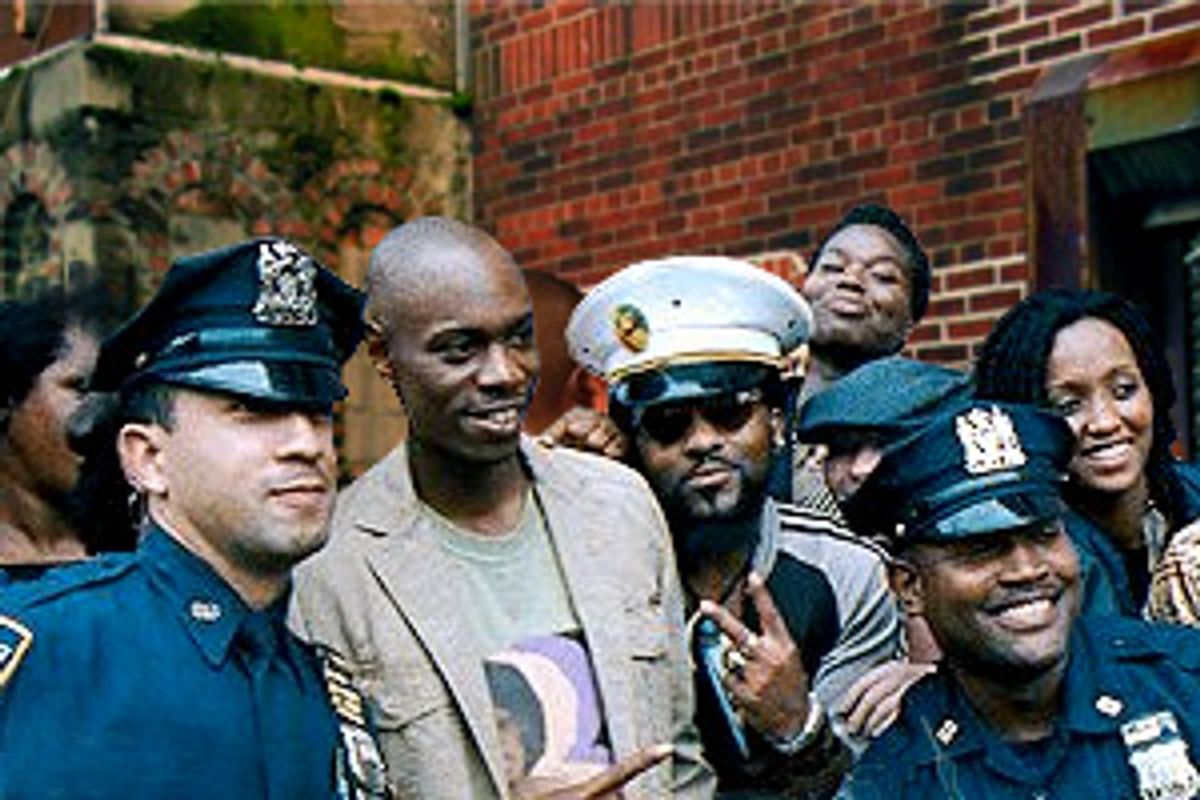 "Dave Chappelle's Block Party" takes place in two parts of the country so different from each other, geographically and sociologically, that they could almost be two different Americas: One is Yellow Springs, Ohio, the small town near Dayton where Chappelle lives, a laid-back landscape of tree-lined streets and little stores where you can buy chewing gum or cigarettes or whatever you need. The other is Bedford-Stuyvesant, Brooklyn, a large city neighborhood of brownstones (some magisterial, others languishing in disrepair) and mom-and-pop establishments of all types, many of them friendly-looking and inviting, others forebodingly seedy. Creeping gentrification notwithstanding, Bed-Stuy is a neighborhood that still has plenty of rough edges, the kind of place that most people in Middle America, or even elsewhere in New York, wouldn't go out of their way to visit.

Yellow Springs is populated largely (but not wholly) by white people; Bed-Stuy is mostly (but not wholly) black and Hispanic. And bridging these disparate countries-within-a-country is an extraordinarily gifted comedian who, one day, decided he wanted to host a New York block party featuring some of his favorite hip-hop artists. He'd invite a bunch of Ohians to come to Brooklyn, at his expense, to see the show; people from New York would hear about the party and simply show up.

While the rest of us are busy carving up the country -- red state, blue state; urban, suburban; sophisticated, rustic; them, us -- in "Dave Chappelle's Block Party," there's room for only one America, but it's one big enough to include everybody. "Block Party" -- directed by Michel Gondry, and shot on film, not video, by Gondry's frequent collaborator, cinematographer Ellen Kuras -- is partly a performance documentary, a record of an afternoon-into-evening concert that took place on Sept. 18, 2004, at the L-shaped intersection of two quiet Bed-Stuy streets: The artists featured on the program include Erykah Badu, Jill Scott, Kanye West, the Roots and Dead Prez, as well as, remarkably, the reunited Fugees. But "Block Party" is also a record of Chappelle just horsing around, both in New York and Ohio. And Chappelle's horsing around is often funnier, and more brilliant, than the routines other comedians spend months honing.

Chappelle will turn out to be, I think, one of the defining comedians of our era, partly because his jokes and routines -- as he has shown on his hit Comedy Central series "Chappelle's Show" and elsewhere -- are so sociologically sharp that they almost defy laughter. I'm still feeling rattled by a sketch I saw on the first-season DVD of "Chappelle's Show," in which Chappelle plays a black white supremacist. (Blind from birth, he has simply convinced himself that he's white, availing himself of all the power and standing that his imaginary skin color grants him.) I'm not wholly convinced I didn't dream this sketch. Chappelle's ideas are both outlandish and beautifully conceived, and although his riffs never seem forced or canned, you get the feeling they spring from thoughts that have been marinating for a long time. His gags have the rare distinction of feeling both spontaneous and considered.

In "Block Party," Chappelle observes at one point, "Old people fuckin' love me. You know you must be doing something right if old people love you." The remark is pure self-deprecation -- Chappelle is making fun only of himself. But even though he's just 32, there are ways in which he seems much older. There's nothing careless about Dave Chappelle. He shows a great lightness of spirit balanced with a sense of responsibility, something that has become even more evident in his recent appearances on "Inside the Actors Studio" and "The Oprah Winfrey Show." Explaining why he failed to show up to begin the third season of "Chappelle's Show," he told "Actors Studio" host James Lipton that the deal-making was what got to him, that there were too many people out to take a piece of him, and he wondered what he'd have left of himself in the end. "The higher up I go, for some reason, the less happy I am," he said.

You can read that as a snippet of disingenuous celebrity-speak, but I think, at the very least, it suggests that Chappelle has wrestled with the distinction between being a personality and a person. In "Block Party," he allows himself, comfortably, to be both, as if, perhaps, he saw the party as a kind of silver lining to the clouds that come with fame and money. Gondry's camera follows Chappelle around Yellow Springs, where he asks any number of people he runs into -- store clerks, teenagers who are just hanging out, elderly folk doing their errands, parole officers wearing stiff, white short-sleeved shirts -- "Do you like hip-hop?" He asks the question of everyone he sees, white or black, and age doesn't matter, either. This isn't a test of hipness; as much as Chappelle loves hip-hop himself, it's clear that he wouldn't think "no" was an unreasonable answer. But he has only a few dozen "golden tickets" to give out, each of which will entitle the bearer to transportation from Ohio to Brooklyn and back, as well as lodging, and he wants these tickets to go to people who'll appreciate them. One elderly gent, with an air of regret, says that the problem isn't that he doesn't like the music; it's just that he doesn't "hear well enough to catch the words." Another older woman laments that she can't go to Brooklyn because she has to go to Canada that weekend. "Canada!" Chappelle exclaims. "Tryin' to dodge the war?" The woman laughs because, well, how can you not?

And everyone Chappelle approaches -- for the most part these people are white, and older, not what you'd immediately think of as Chappelle's target demographic -- either accepts his invitation eagerly or sounds genuinely regretful at having to decline. Most excited of all may be Ohio's Central State University marching band, who, when they get the word that they've been granted permission to go to New York, begin screaming and jumping up and down as if they were on springs. (They'll have the honor of opening the show, accompanying Kanye West on an extraordinary, exhilarating version of his "Jesus Walks.")

"Block Party" is a rangy, open-hearted picture; its spirit is one of joyous inclusiveness, and I suspect it will open the eyes (and ears) of many people who claim not to like hip-hop, if only because it shows that the term is such a broad umbrella for a vast range of styles. Considering hip-hop is the biggest force in pop music today, I'm always surprised by the number of people I meet (most of them, admittedly, over 40 and white) who think it's all gangsta rap, and who, for that reason, have decided that they unilaterally don't like it -- which is a little like deciding you don't like abstract painting without ever having seen a Rauschenberg or a Pollock. Nearly all the performances in "Block Party" are vital and highly charged, even though they're also extremely varied. The simmering political frustration that courses through Dead Prez's numbers is a world apart from, say, the Fugees' accomplished but perhaps too studied version of "Killing Me Softly." Even so, it's remarkable to see all these performers brought together in one place, and it's easy enough to trace the threads between astonishing performers like Jill Scott (the spiritual daughter of Abbey Lincoln) and Erykah Badu (whose magnificent exploding-star afro is like a visual ode to Sly Stone).

And Chappelle is always on the sidelines, drinking it all in, clearly proud that he's been able to pull the whole thing together. Whether he's goofing around with friends like the extraordinary actor and rapper Mos Def (who himself grew up in Bed-Stuy) or sitting down at a Salvation Army piano to map out a surprisingly delicate and moving version of "'Round Midnight" (it's one of only two songs he knows how to play -- the other is "Misty" -- and as the Roots' ?uestlove marvels, he's one of these guys who's "not a musician, but has devoted his whole life to 'Round Midnight'"), Chappelle is always the driving, and unifying, force behind "Block Party." He tells jokes that aren't particularly funny: "Did you hear the one about the industrious prostitute?" But the punch lines, even the lamest ones, make you laugh anyway, simply because Chappelle's timing is so remarkably perfect, without ever being rigid or predictable. His beats are marvelously elastic, but they snap when they need to. You know he's not kidding when he explains that he learned about timing from listening to Thelonious Monk, whose woozy musical punch lines always hit their target.

The camera gets a charge just from the look of Chappelle: In the early minutes of the movie, we see him prancing about with a bullhorn, announcing the details of his upcoming concert to us and to the world, a gangly cheerleader at an improvised pep rally. Chappelle has no butt: He's all joints and limbs, a lanky puppet on invisible strings. Later, he'll use that same bullhorn while driving down one of the tonier streets of what I'm almost sure is Brooklyn's Fort Greene, his rallying cry of "Attention, Huxtables!" echoing down a canyon of exquisitely renovated brownstones.

Chappelle's humor is unabashedly racial, though not racist; he seems to get that erasing differences isn't the answer, and it isn't even desirable. He spends some time talking to an aged white hippie couple who own an outlandish (and amazing) churchlike building right near the spot where the concert will take place. They tell a fairly wild story about how their house got its name, "Broken Angel," which is painted in swooping letters on its facade.

Chappelle listens to their story as the camera takes in the spectacle of their appearance: The woman is dressed in gauzy, water-colored layers, even though she's well past 60; the man, an elfin presence, is dressed in a simply tailored dark jacket whose shoulders are flanked with a vivid rainbow design. They tell Chappelle that they're about to celebrate their 46th wedding anniversary, and he listens attentively.

Chappelle doesn't pretend he isn't amused by this somewhat eccentric pair of lovebirds -- it's impossible not to be struck by their quaint mannerisms and odd expressions. (At one point the woman explains that she wants to marry Rachmaninoff -- after she's dead, of course, because death is the only thing that will render her current marriage vows null and void.) But he doesn't mock these people, not even when the woman explains that she dislikes hip-hop because she doesn't approve of "bad" language. His America has room for the lady in Ohio who works in the store where he buys his cigarettes (she confesses that, out of respect for his privacy, she had always pretended she didn't know who he was, even as she was screaming to herself, "It's Dave Chappelle!"), as well as for the old hippies who may not like his taste in music but who are nonetheless happy to support his little "happening."

At a time when our country feels divided to the point of cracking, "Dave Chappelle's Block Party" feels like a salve. It's a defiant act of optimistic patriotism. This is what Dave Chappelle's America looks like, and now that we get the idea, there's no reason we can't live in it too.