The Academy celebrates niceness, bleeps out "bitch" and pats itself on the back for good behavior. And what did they do to poor Jon Stewart? 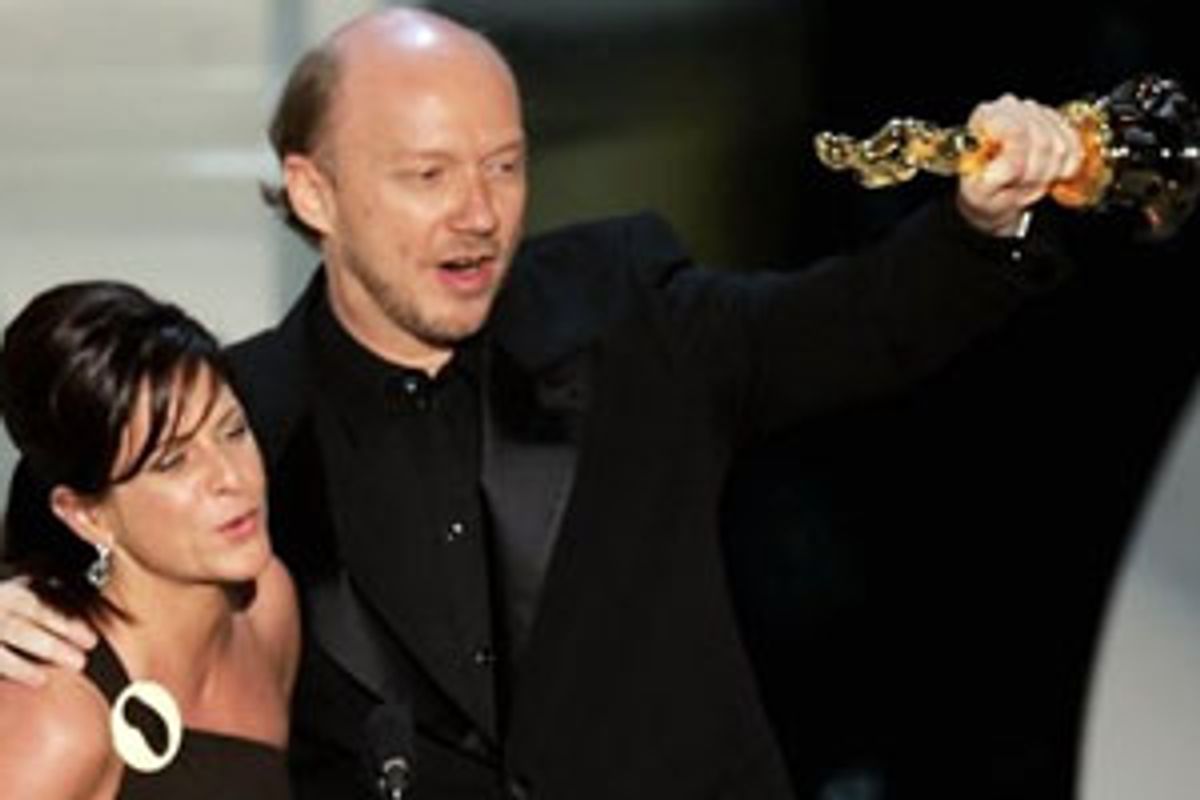 Just when you thought it couldn't possibly get any more wrist-slashingly boring, the boringness collapsed in on itself and became a deadly howling void of terrible sucking from which the light of no star could escape. These Oscars were so hideously uptight, they got pulled down a worm-hole and traveled light-years, on and on, forever, until they finally ended up in the darkest, airless regions of some fat, ultraconservative's welded-on undershorts. Somehow, the roaring vacuum of these Oscars even killed the chi of the Golden Boy, our very own Jon Stewart. He began apologizing within 20 minutes, once he realized he'd never get his ankles out of the anaconda.

How ... HOW did Jon Stewart suck so hard?

I think somebody MADE him suck. I think there was some serious Hollywood penitentiary shower-shanghai going down. Somebody stuck Jon Stewart in the tent with Oscar and made him commit unnatural acts of sucking. I don't want to name names, but I think it was probably J.C. Penney himself.

Walk it off, Jon. Sasha Cohen showed us that you can fall on your ass and still lose with dignity. It's just not America's year.

A few things were surprising: We thought this was going to be the Gay Oscars. Instead it was the "Hey, you fearfully ignorant red-state hick-weeds: Hollywood is America's social conscience and history proves that we've always been smarter than you" Oscars. Oscar was being defensive, because Hollywood is tired of being called dirty names by the no-necked monsters hanging around the White House bowling alley.

I am beginning to think that the Oscars are doing for Hollywood what the Gap and Banana Republic did for American fashion, for a while -- which was to lock the whole chaotic scene into a flavorless, oatmeal-colored safety zone. Once a decision is made to be tasteful and risk-free, all spark, soul, variety, sleaze, spontaneity and fun go right out the window.

I had this list of awards I was sure I was going to be able to hand out from my upside-down perch in my bat-cave, and was disappointed to not be able to use them:

Shiniest, Pinkest Face-lift: Hell, nobody had a really shitty, pneumatic one where the skin is all raw and as lineless as an uncooked chicken breast. Everyone on camera was fairly natural-looking. Snore.

Moment Jon Stewart Looked Most Manic-Depressive: I thought there would just be one or two, but you could see his "my material and I are tanking" realization dawning within the first 20 seconds. He hopefully tried to airlift the thing for a while, but after the second commercial break his mood just plummeted unchecked, until he finally became bravely and professionally glum, soldiering forward with all the glee of a rescue worker who continues to try to relieve suffering when he secretly knows that All Is Doomed.

Most Rambling, Self-Indulgent, Ungrateful Twit (aka the James Cameron Award): Again, nobody was really outstanding in this category. The jackbooted Oscar brass must have sent out a DMV-style "Rules of Tasteful Oscar Participation" etiquette guide, and threatened bold penalties for those who went astray. This helpfully eliminated most human error from the evening, and totally ruined everything.

Star Most Insouciantly Acting as if This Event Were Totally Unimportant in the Scheme of Things: Again, what was with all the infuriatingly respectful, middle-of-the-road, nondrunken behavior? Did they breathalyze all the celebs before they let them in the Kodak auditorium?

Camille Paglia asked the right question: Are there no capital-N Narcissists left in Hollywood? No wonder box-office receipts are so grim. No obnoxiously starlike stars are allowed on campus anymore. I guess the honchos now regard such egocentricity as too problematic to deal with. To be a Hollywood success these days, you have to be reasonable and polite. It really makes me pine for notorious tyrants like Vincent Gallo and Faye Dunaway -- sure, they're impossible, tantrum-throwing wack jobs ... that's the same mental illness that makes them preternaturally fun to watch.

Best and/or Worst Use of Double-Sided Nipple Tape: This year, the Academy Awards proclaimed that they were embracing a "Return to Glamour" -- but there were no nipples to contend with for the second year in a row. There wasn't even a particularly plunging neckline in sight -- just ill-fitting, strapless, ace-bandage-type '50s ball gowns. Yet another edict from the brass, I'm sure, which seems to be nostalgically yearning for nice, decent girls like Debbie Boone. Look for gloves and headscarves next year, and some kind of rule against indecent ankle exposure.

Most Sarcastic Hair: Nope. Tim Burton, maybe, but his sarcastic hair has been sarcastic for so long it is now totally sincere. Luke and Owen Wilson, Russell Crowe and Jake Gyllenhaal all showed their solidarity with the incarcerated George Michael by sharing the award for Most Passive-Aggressive, "I Can't Be Buggered to Shave for This Tiresome, Whorish Event, Because It Is Not Art" Facial Hair.

Person Who Will Require the Most Amount of Therapy Later to Overcome Their Embarrassment: Jon. It's not even funny. I'm worried. He needs our prayers.

Most Burnt-Sienna Spray Tan: That went to J.Lo, who is going into Latin overdrive and obviously allowing the wrong family members on her payroll to do her ethnic bronzing job. Her contouring had the unfortunate effect of making her forehead look wildly convex, as if a toboggan were trying to emerge from it, fully formed.

Most Self-Loathing Zero-Body-Fat Fitness Nazi: You had to be around for the preshow, but that went to Lisa Rinna, who looked as if she had been training for some kind of new, inverted, yogic speed-skating event where she did handstands with the skates on her fists and built enormous quadriceps in her arms and shoulders. And then she steeped in the vat of Guinness-colored tanning dip. And then she had a pit crew keeping her breasts inflated to exactly the right pressure.

All in all, good people got good awards ... and that's good, I guess. There were some solidly good movies (although I wouldn't have listed "Crash" among them). Philip Seymour Hoffman is a hugely talented guy, as is Ang Lee and George Clooney and Rachel Weisz and etc.

But something was rotten in the Kodak auditorium. It wasn't obvious to me, at first.

I like Reese Witherspoon, and I thought she did a very fine, thoughtful and nuanced job of being June Carter -- a very bossy and righteous ball-buster who was still miraculously lovable. She deserved the trophy.

Reese is a very, very nice girl. A nice Southern sorority debutante with a nice marriage and nice children and nice morals. Nice. Upstanding. Proper. Acts like a decent lady. This reeks of some kind of subterranean, 1950s social conditioning to me. Maybe I'm paranoid, but what with abortions slowly becoming illegal across the bleak states, I have a queasy suspicion that if, say, "Klute" had come out this year, with Jane Fonda playing the intelligent, sassy, empowered hooker, not only would she not have been nominated, but, really, the film would have never been made.

I think Hollywood is tacitly endorsing a Good Behavior code that I find frightening. Sure, the entertainment industrial complex recognizes minorities and good causes and champions them -- but it also disallowed the winning song, "It's Hard Out There for a Pimp," from using the word "bitches" in the broadcast. I mean, really. The word "bitch" has been commonplace on prime-time TV since ... when ... "Dynasty"? At the latest?

George Carlin's act in the early '70s listed the Seven Words You Can't Say on TV as "shit, piss, fuck, cunt, cocksucker, motherfucker and tits." Not a "bitch" on that list, although it seems to have suddenly been added. Joan Rivers' red-carpet color commentary was distinctly decolorized, at least when it came to blue: Her monologue was bleeped out so often, it had more holes than a document released through the Freedom of Information Act.

When you allow permissiveness and open-mindedness to devolve, shut down and roll back, it's a slippery slope all the way back to the Stone Age, where pretty soon you won't even be able to swear on TV in a dead language if you want to.

Sleaze doesn't go away. You can marginalize it, ghettoize it, hide the dirt under your nails beneath nice white gloves ... but the dirt is still there, people. It needs to be healthily integrated into the cultural psyche. Denial of these impulses doesn't work so well -- which was, ironically, the underlying, consciousness-raising message of "Brokeback Mountain."

To not trust ourselves with a free use of harmless, naughty things is to suggest that we don't have enough inherent goodness or flexibility or strength to absorb some light shock. Moral certainty is the enemy, my friends. Not the word "bitch," taken in its proper context, e.g. an autobiographical song written by a fictional pimp.

I think the worst thing about the whole evening was that Hollywood was trying to paint itself as a machine that makes bold, brave and radical statements to the world. It sang its own praises for being an organism that tenaciously upholds the torch of forward, open-minded thinking in the face of oppressive forces, and for championing tolerance, peace, awareness and free speech.

And all night long, there they were, censoring the living fuck out of themselves.

Look what coloring too far inside the lines did to our boy Jon Stewart Sunday evening. Do we need more proof that this kind of conformity is evil and deadly and soul-assassinating?

I would like to thank Ms. Camille Paglia for adding a whole lot of wit and intelligence to the podcast and for expertly negotiating my torrents of profane blathering. That podcast was a lot of fun and everything -- but in the end, it was like trying to jump-start a dead whale: There was no imposing life on the subject, and after a while, the putrid goo just got everywhere.

Life is good. We seem to be forgetting this in our zeal to make it cleaner. You have to take the bitch with her warts and all. Cut too many small parts off, the soul is forced out. Impose too much control, freedom dies.

I wonder if Chris Penn and Shelley Winters had to pass because there was no oxygen for their burning spirits in the airtight Hollywood terrarium this year. I hope Oscar decides to start breathing again soon. I hope America decides to be actually free again, too, instead of just loudly congratulating itself for having freedom while slowly and sneakily cutting more and more small parts off of it.

Freedom: Love it or lose it. It will be much harder to jump-start that whale after it's dead than to protect it while it's still alive. If Hollywood really wants to pretend it's useful, it should at least protect itself.