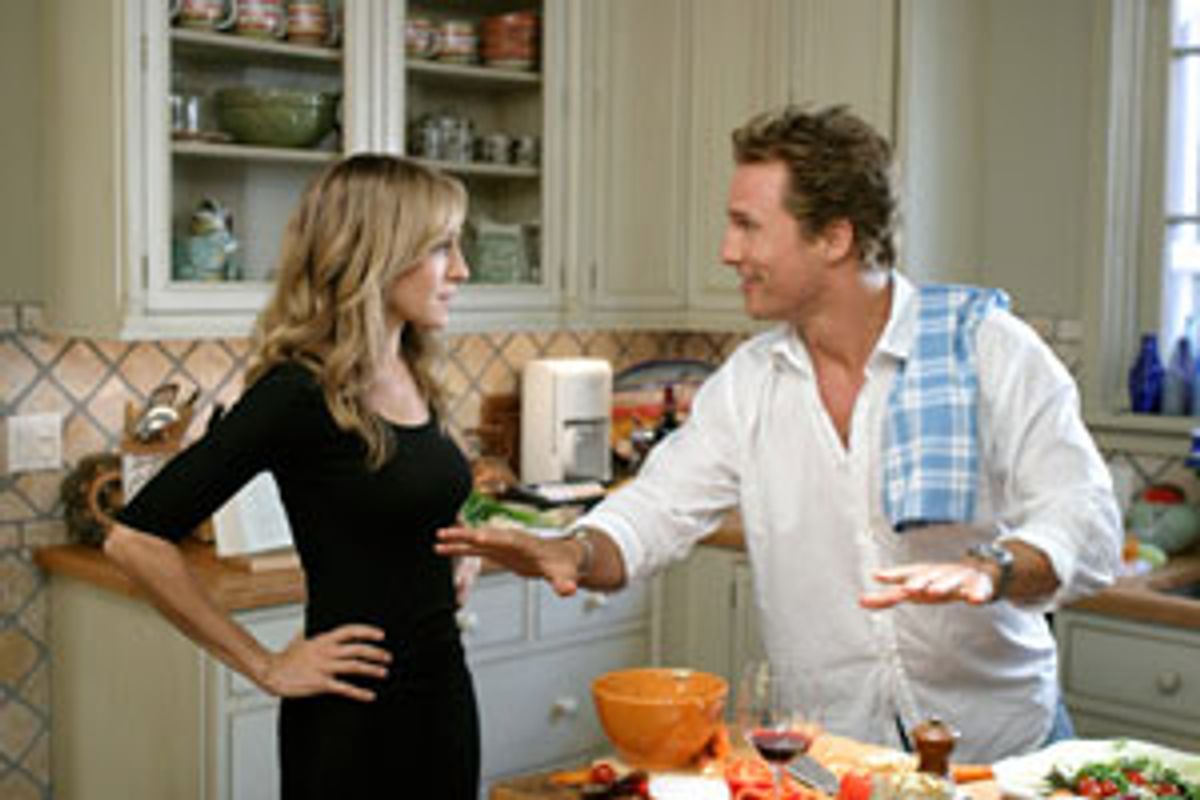 At least according to trend articles, more and more young people are living with their parents well into their 20s and even into their 30s. So the idea behind Tom Dey's "Failure to Launch," if only mildly clever, is reasonably realistic: Sarah Jessica Parker's Paula is a life coach of sorts who hires herself out to not-so-empty nesters, using her alleged charm and wit to inspire self-confidence and self-sufficiency in their sons so they'll finally have the will, and the desire, to leave home. A frustrated mom and dad (played by Kathy Bates and Terry Bradshaw) engage her services in the hope that their 35-year-old son, a perpetually tanned, outdoorsy type named Tripp (Matthew McConaughey), will finally move out of his childhood bedroom. The hitch is that she begins to fall for him herself, although you can't begin to understand why.

It's never really made clear exactly how Paula's system is supposed to work. For one thing, she obviously needs to break things off after she's enticed these hapless fellows away from the homestead, a little detail the movie (with its script by Tom J. Astle and Matt Ember) never really addresses. But that's not the only problem with "Failure to Launch." This is one of those blindly evenhanded movies in which we're supposed to feel sympathy, or at least some kind of aggravated affection, for both parties even though we can't find anything to like in either of them. And when the movie does end up taking sides, it picks the wrong one: Paula, possibly the less-dislikable of the two, gets a rap on the nose for being too brittle and unfeeling, while McConaughey's Tripp, the aggrieved party, expresses his anger by blurting out how fat a certain pair of pants make her look. In the end, we're supposed to applaud her for getting in touch with her feelings and him for recognizing that a woman is more complicated than a mountain bike, but neither of them even comes close to impersonating a grown-up.

Tripp doesn't live at home because he's, say, a social worker of modest means; he sells sailboats for a living, and he's self-congratulatory about the sweet deal he's got at home to the point of being cocky. His mom does all his laundry and presents him each morning with a lovingly home-cooked breakfast. And when he gets tired of dating this or that girl, he simply brings her home to sleep in his comfy little cowboy bed; once she gets wind of the fact that his parents are just down the hallway, she writes him off as a loser and does all the breaking up for him.

Somehow, though, the story worms itself into a contorted construct in which we're supposed to feel sorry for Tripp, while Paula is the baddie for making her living in such a dishonest way. As McConaughey and Parker play them, Tripp and Paula deserve each other. (His hair is nearly as rakishly tousled and meticulously highlighted as hers is.) But at least Parker brings a few flashes of sly humor to her character. Becoming a star may have been the worst thing that could have happened to Parker; in those last few seasons of "Sex and the City," she became painfully obsessed with her own lovability, a tiny tyrant in desperately high heels. But in last year's "The Family Stone," Parker seemed to have regained some of her old unself-conscious charm. While the Parker we get here feels more like a repackaging of the Carrie Bradshaw franchise than anything else, at least there's hope: Parker's timing is as good as it ever was. She, like actors everywhere, could only benefit from better material. Then again, not even better material could help McConaughey. I'm baffled by the notion of McConaughey as a romantic lead: He's too smirky and self-satisfied to be even remotely charming, let alone sexy. He flashes his dimpled farmboy grin on cue; there's nothing easy or casual or believable about it. In an inane scene in which Tripp is bitten by a chipmunk, you hope it has the good sense to gnaw straight down to the bone, although not even that would be enough to make the character seem half-alive.

As listless and phony as "Failure to Launch" may be, it does have one secret weapon in Zooey Deschanel: Even with a relatively small role, she blows the whole movie to smithereens. Deschanel plays Paula's roommate, Kit, a misfit vixen who's driven to insomnia by the taunting of the mockingbird who's taken up residence in the tree outside her window. Her solution? Buy a shotgun! (The scene in which she attempts to purchase said weapon from a salesman played by Rob Corddry, of "The Daily Show," almost makes "Failure to Launch" worth sitting through.) Deschanel, her boop-be-doop eyes fringed with lush velvety lashes, has the sort of face you might see painted on a child's tea set from the '30s. But her luminous glow isn't one of pure innocence; she's got the devil inside her, too, and that thrift-store jumble is intoxicating. Deschanel may not be as brilliant as the great comedian Gracie Allen (and, at any rate, it's too soon to tell). But her Rube Goldberg timing (which only seems indirect) and blissfully zonked demeanor suggest the spirit of Allen. She's the only actor in "Failure to Launch" who isn't earthbound; she leaves everyone else in the dust simply by hanging back.