The cult film "Grey Gardens" followed the descent of mother-daughter socialites into feral living. Can the new musical version re-create the magic? 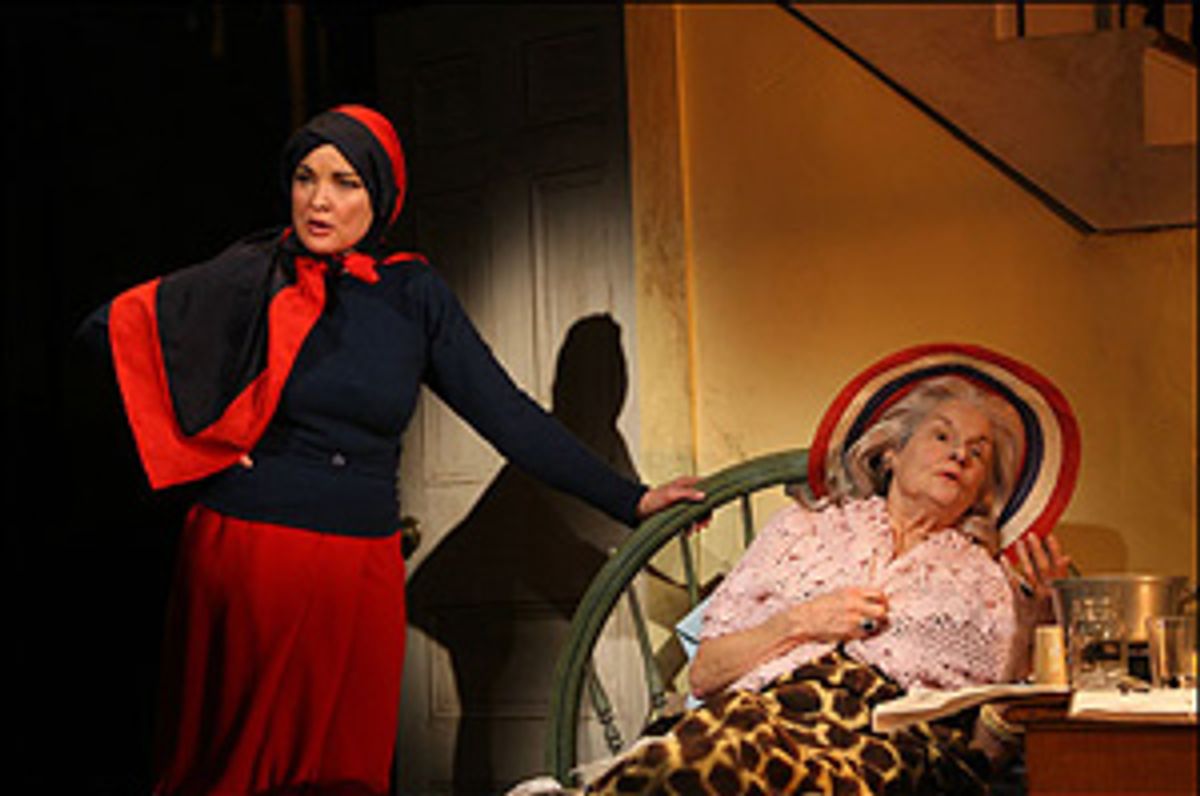 Trying to get my mansions green
After I've Grey Gardens seen

I think this line speaks to something universal in the film, which tapped into a strangely exhilarating fear that we all share. What befell the residents of Grey Gardens could happen to almost anyone: What would happen, the movie tacitly asks, if we let go of the rope, went with the flow and let entropy have its way with us?

The film will cause a shudder in anyone who has felt insufficiently vigilant in regard to fending off decay.

Some flirt with entropy more than others, but the Maysles' documentary certainly scared many viewers straight, inspiring them to tighten up and keep their "mansions green," both physically and mentally. I know I ran home sober, did the dishes, paid the bills and exorcised all the cobwebs I'd been choosing not to see in the corners. "Grey Gardens" showed that it might be terrifyingly easy to get caught in that undertow: Start with eccentricity, fall on a streak of hard luck, add a certain wishful, bohemian overpermissiveness, top it all off with a manor-born inability to work for money -- and voilà! Even members of the ruling class can be reduced to living like raccoons.

Edith Bouvier Beale and her daughter, Edith -- Big Edie and Little Edie, as they were known -- were the deranged, black-sheep aunt and cousin of Jacqueline Kennedy Onassis. They were sheltered, educated and, by all reports, very beautiful high-society debutantes, who in their later years became a powerful demonstration of the bumper-sticker maxim "If You Can't Be a Good Example, at Least Be a Horrible Warning."

When the Maysles brothers began shooting the Edies, they were virtually feral socialites, living like homeless squatters with numberless cats in their own East Hampton, N.Y., mansion. They had recently been saved from eviction by Jackie O. herself, who intervened when the city cracked down on their unsanitary living conditions. Jackie's rescue mission was not enough to halt the march of squalor, however -- the documentary captures the women two years later, back in a full-blown state of domestic ruin.

People had wildly divergent opinions about the film "Grey Gardens" when it was released. The largely gay, witty cocktail crowd was delighted by the sweetness, tragic humor and fey craziness of the Beales -- handsome women with style, manners and exhibitionist tendencies who happened to be sinking in a New England version of the Tennessee Williams tar pit. This proto-example of reality TV was voyeuristic, but somehow it also wasn't; you didn't pity the Beales, mainly because they did not pity themselves. "Grey Gardens" was a charming black hole you didn't mind spending a couple of hours in, but it did take you a few minutes of moral adjustment to fully enjoy it.

Then there were others who saw "Grey Gardens" and only felt sad, repulsed and dirty for watching it. For them, the spectacle of the Beales' colorful decay was akin to looking at images of freakishly disfigured people in old medical manuals. They saw nothing redeeming in it.

So turning "Grey Gardens" -- a plotless tightrope walk between compassion and schadenfreude -- into a musical that could appeal to a wider audience than the film's fans was a difficult task, the dramaturgical equivalent of arranging to take a bunch of tourists on a ski trip to the South Pole. But Pulitzer Prize winner Doug Wright, who wrote "Quills" and "I Am My Own Wife"; Michael Korie, who wrote the libretto for the opera "Harvey Milk"; and Michael Greif, who directed "Rent," boldly set out on the adventure.

And they did not exactly fail.

"Grey Gardens," the musical, which just opened at New York's Playwrights Horizons, is a riveting example of the inconsistency of genius, and the pitfalls that can happen when brilliant people outsmart themselves. A great deal of the production is breathtaking; some parts are perplexingly bad. It is perilously uneven, but so much about "Grey Gardens" is so great that one hopes the rough spots get ironed out so that the play can have the long, eccentric life it deserves.

Most problematic is the creators' superimposing of a plot on the Beales. Act 1 takes place in 1941, in the back story, while Little Edie and Big Edie were still rich and beautiful and not yet crazy. Little Edie -- "Body Beautiful Beale," as she was called in those days -- is a leggy, sun-kissed Hamptons debutante, on the verge of marrying JFK's brother Joe Kennedy.

Her only apparent problem in life is Big Edie (played by Christine Ebersole, who plays Little Edie in Act 2). There is an exceptionally skillful construction of the Beales' unhealthy mother/daughter dynamic, which essentially turns Act 1 into "Drama of the Gifted Child -- the Musical." The screeching between the Edies is real and familiar enough to be truly unpleasant, and it is chilling how Big Edie ever so gently crushes her daughter under her own flowery, narcissistic self-regard and competitiveness.

All the while, there is music, most of which is wonderful, and ripe for an original cast recording that will be gleefully worshiped by young drama majors for years to come.

There are a couple of glaring clunkers, like the Cole Porter-ish number "Better Fall Out of Love," which feels as if the songwriters are pandering to the uptight tastes of the super-square "Lion King" crowd. But the vast majority of the show's music is as wild, haunting, overgrown as the neck-high grass in the Beales' backyard, and lovely -- crammed full of wit, pathos and delicious harmonies.

Unfortunately, Act 1 goes on a bit too long. It's hard to care about the Beales when they're beautiful and young because we're too impatient to see them when they're old and bonkers. Little Little Edie is charming and gorgeous, but two-dimensional -- somewhat shrill in fights with her mother, but otherwise not the least bit eccentric or batty, which is a pity: I craved more foreshadowing of the bridge to nowhere her brain eventually crossed. After a catastrophic event in Act 1, wherein the Beale women are abandoned by all the men in their lives, we are aware that Little Edie went "back to the Barbizon" in New York, to her small modeling career and, one presumes, a promiscuous, slummy, Greenwich Village-lifestyle unbecoming of a debutante. But this isn't shown, and we miss seeing this crucially developmental part of Edie's life.

While it makes dramatic sense to contrast the Beales' plush, earlier lives with the wreckage of their later years, it's hard not to feel a little disappointed that the creators don't let us see any of their long slide down. Since the characters resemble themselves very little from Act 1 to Act 2, we have no clear idea how things dismantled to effect these hair-raising transformations: This results in a distinct cognitive divorce between the two acts.

However, the play really starts to cook with gas in Act 2, when Ebersole, desperately outfitted in girdles, mangled cardigans, white heels and a skirt held upside-down with safety pins, walks out of the mansion, squints into the light and sings "Revolutionary Costume for Today." Here, finally, is the Little Edie Beale we know and love.

And it is a revelation.

Ebersole, particularly as Little Edie, turns in one of those thrilling, superlative performances that inspire weeping, chest-beating, genuflecting and clothes-rending praise. The actress appears to have spent a lot of time dangerously exploring the razor edge of her own sanity in order to more sharply portray the molten life of an insane character. Watching her, I recalled a line from Anne Sexton: "Darling, the composer has stepped into fire." Ebersole becomes a human volcano -- Klaus Kinski in a turban made of ski pants. Her Little Edie is a goose-bump-raising, heartbreaking, unforgettable, calamitous experience.

However, despite moments of true greatness, Act 2 never quite congeals. It suffers from a flimsy narrative arc, which revolves around Little Edie's almost leaving to go back to New York but never quite making it, out of a combination of loyalty to her helpless mother, her own frailty and a sense of her own time having come and gone. The act is filled with big ideas: songs designed to illustrate the fantasies and delusions of the Beales -- including one particularly incongruous Norman Vincent Peale gospel number -- but despite gorgeous music and the best of daffy intentions, these flights of fancy tend to distract, and hobble the story line from gaining emotional momentum.

Then again, these very distractions account for some of the musical's most vivid, loopy and beautifully realized moments. The song "Jerry Likes My Corn," in which Big Edie sits in bed and rhapsodizes while cooking on a hot plate, is one of the weirdest, sweetest, funniest things I've ever seen onstage, and perfectly captures the cockeyed charm and humanity of the "Grey Gardens" documentary.

"Grey Gardens," for all its flaws, did manage to steal my heart -- but I have one serious gripe.

By taking the Maysles brothers and their film out of the story -- they simply aren't there onstage -- the musical's collaborators deprive Big and Little Edie of their own true, real-life redemption. They were lunatics, but they were also trained songbirds -- above all, they dreamed of being entertainers in an appreciative world. Big Edie constantly waxes nostalgic over the old records she'd recorded back in the golden days; Little Edie is both envious and breathlessly proud of her mother's accomplishment. The Edies loved and craved attention, and (redemption works in mysterious ways) the Maysles finally gave it to them.

A big part of what made the documentary so lovable is that Little Edie, for all of her insanity, was finally getting her close-up from Mr. De Mille. It was, in a fucked-up way, deeply life affirming.

"Grey Gardens" became a legitimate mania. It was a big favorite at art house cinemas. Little Edie's outsider-art approach to fashion inspired spreads in Vogue. After the film came out, Edie caught the wave, went back to New York and sang at a nightclub for a short spell, before finally relocating to Miami Beach and passing away in 2002.

What made the film watchable was a feeling that the ladies' folie à deux protected them, in a significant way, from ever being crushed by a killing awareness of their hopeless conditions. The Maysles didn't just turn an all-seeing eye on the self-destruction of someone with no inner reserves -- they didn't set out to "break" Danny Bonaduce. Big Edie was as solid as an oak tree, even if she was a crazy old woman who ate cat food. Little Edie may have been a thoroughly unconventional personality, but she always felt like a star, and a star she was, finally. Those revolutionary outfits she threw together, one must remember, were for the camera. By removing the camera from the stage, you also remove the God from Edie's world -- and this turns our Grey Gardens a little too black.