The Pentagon plans to put neural implants in sharks to have them serve as underwater spies -- another example of a defense budget gone mad. 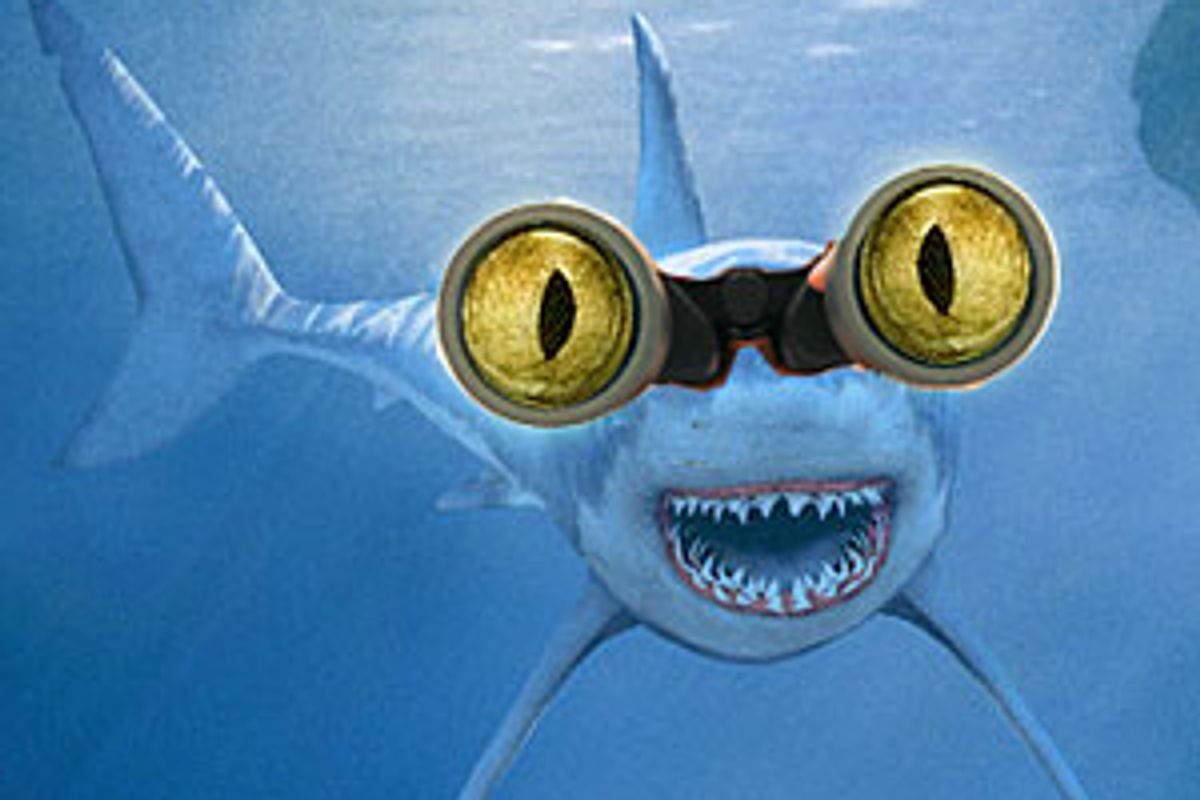 Navy SEALs, move over -- here come the Navy sharks. According to the latest New Scientist magazine, the Defense Advanced Research Projects Agency, or DARPA, the blue-sky wing of the Pentagon, has set yet another group of American scientists loose to create the basis for future red-in-tooth-and-maw Discovery Channel programs. In this case, they are planning to put neural implants into the brains of sharks in hopes, one day, of "controlling the animal's movements, and perhaps even decoding what it is feeling." In their dreams at least, DARPA'S far-out funders hope to "exploit sharks' natural ability to glide quietly through the water, sense delicate electrical gradients and follow chemical trails. By remotely guiding the sharks' movements, they hope to transform the animals into stealth spies, perhaps capable of following vessels without being spotted."

So far they've only made it as far as the poor dogfish, "steered" in captivity via electrodes keyed to "phantom odors." As it happens, though, DARPA-sponsored plans are a good deal lustier than that: Next stop, the blue shark, which reaches a length of 13 feet. Project engineer Walter Gomes of the Naval Undersea Warfare Center in Newport, R.I., says a team will soon be putting neural implants "into blue sharks and releas[ing] them into the ocean off the coast of Florida." To transmit signals to the sharks, the team will need nothing less than a network of signaling towers in the area. This has "antiballistic shark system" written all over it.

Actually, it's not the first time the military has invested in shark technology. As Noah Shachtman of DefenseTech pointed out last July, "The Navy has tapped three firms to build prototype gadgets that duplicate what sharks do naturally: find prey from the electric fields they emit." One of them, Advanced Ceramics Research Inc., limned the project's potential benefits this way: "If developed, such a capability might allow for the detection of small, hostile submarines entering a seawater inlet, harbor or channel, or allow objects such as mines to be pinpointed in shallow waters where sonar imaging is severely compromised." And then there's that ultimate underwater dream, the "Microfabricated Biomimetic Artificial Gill System," which could lead to all sorts of Navy breakthroughs, perhaps even -- if you'll excuse a tad of blue-skying on my part -- blue shark/human tracking teams, or if not that, then lots of late-night-TV Aquaman jokes.

Of course, the Navy has been in nature's waters in a big way for a while with its Marine Mammal Program in San Diego. There, it trains bottlenose dolphins as "sentries" and mine detectors. Such dolphins were "first operationally deployed" in Vietnam in 1971 and a whole dolphin patrol (like, presumably, the shark patrol to come) is now on duty in the Khor Abd Allah waterway, Iraq's passageway into the Persian Gulf. To the embarrassment of the Navy, a dolphin named Takoma even went "AWOL" there in 2003, soon after the invasion of Iraq began.

As Nick Turse has pointed out, DARPA funds research into weaponizing creatures that inhabit just about any environmental niche imaginable -- including bees capable of detecting explosives; "eyes" patterned after those of flies that might someday make "smart" weaponry even smarter; gecko wall-climbing and octopus concealment techniques; and electrode-controlled rats capable of searching through piles of rubble. In addition, between nature and whatever the opposite of nurture may be, there has been an ongoing military give-and-take. Consider, for instance, BigDog, highlighted in the same issue of New Scientist. Compared with a pack mule, goat or horse, this "robotic beast of burden" is being developed by Boston Dynamics to haul over rough terrain at least 40 kilograms of supplies soldiers won't need to carry, while being able to take a "hefty kick" in the legs without crumpling to the ground.

From sharks to robots, from hacking into your nervous system to manipulating the weather, the Pentagon seems determined to exert "full-spectrum dominance" especially over that top-of-the-line primate, us. To achieve this, it sponsors blue-sky thinking with a vengeance. Nothing that moves or breathes on the planet, it seems, is conceptually beyond conscription by Uncle Sam into possible future-war scenarios.

This is undoubtedly what happens when you have an administration that considers the Pentagon the answer to all our problems and gives it a $439.3 billion budget to play with -- and that's exclusive of actual war-fighting money (which, for Iraq and Afghanistan, at an estimated $120 billion for the year, will come in supplemental requests to Congress). And remember as well that the fiscal 2007 Pentagon budget does not include the $9.3 billion the Department of Energy will put into nuclear weapons or a host of veterans-care benefits, all of which bring the budget at least close to the $600 billion range. Analyzing the 2006 budget, economist Robert Higgs estimated that all military-related outlays -- that is, the real Pentagon budget -- totaled closer to $840 billion.

Even taken at face value, the 2007 budget accounts for more than half of the $873 billion in federal discretionary spending -- the funds that the president and Congress decide to spend each year. For 2007, education, the second largest discretionary budget item, amounts to just over $50 billion, a piddling sum by comparison. But there is probably no way to put any version of the Pentagon's finances into perspective. Militarily speaking, it throws other military spending on the planet into the deepest shadow. As Frida Berrigan, senior research associate at the World Policy Institute's Arms Trade Resource Center and coauthor of "U.S. Weapons at War 2005," points out, "The Pentagon accounts for about half the world's total military expenditures of $1.04 trillion, spending alone what the 32 next most powerful nations spend together."

The United States is also by far the planet's largest exporter of weapons and military hardware. An annual Congressional Research Service report found that, in 2004, global weapons deliveries totaled nearly $37 billion -- with the United States responsible for more than 33 percent of them, or $12.4 billion, and it hasn't gotten better since.

No other country puts anything like such effort, planning and dreaming into the idea of projecting planet-spanning military power, caught so grimly in that phrase, "full-spectrum dominance." To Pentagon minds, this seems to mean: from 20,000 leagues down to 20 miles up (and everything that creeps, crawls, swims or flies in between). The phrase first gained attention with the release in 2000 of the Air Force's Joint Vision 2020 statement -- a supposed look into a future world of American war making. It's one of those terms that stick with you -- and not just because of the full-spectrum weaponry that's now on the drawing boards. Those weapons range from hypervelocity rod bundles, meant to penetrate underground bunkers from outer space (ominously nicknamed "rods from God"), to the common aero vehicle, "an unmanned maneuverable spacecraft that [by 2010] would travel at five times the speed of sound and could carry 1,000 pounds of munitions, intelligence sensors or other payloads" (Washington Post) anywhere on the planet within two hours, to that permanent base on the moon the Bush administration has called for by 2020 (and the array of "Star Wars"-style space-based weaponry that would ring it).

Full-spectrum dominance turns out to include even the United States, where, in 2002, the Bush administration established the U.S. Northern Command, or Northcom, whose Web site at present has the following from a visit by Assistant Secretary of Defense for Homeland Defense Paul McHale as its reassuring quote of the week: "I'm leaving with a clear sense of confidence in the vision and planning of U.S. Northern Command to deal with any emerging threat, whether an occurrence of pandemic flu, a 2006 hurricane ... or a terrorist attack still being planned by our adversaries."

While the Pentagon quietly begins to take over tasks that once were delegated to civilian agencies, its blue-sky weapons planning extends into the distant future. Take, for instance, the Air Force Futures Game '05 held for several days last October in the Dulles, Va., office of consultants Booz Allen Hamilton. The exercise was dedicated to "looking at scenarios for the year 2025," especially one in which a nuclear weapon is loose in a "Middle Eastern country" and a major war is in the offing. Like many other Pentagon war-gaming exercises, this one was largely committed to confirming the usefulness of as yet nonexistent or hardly existent weaponry, especially in the areas of "space access" and "electronic warfare." According to Col. Gail Wojtowicz, Air Force division director of future concepts and transformation, the gamers were "also looking at one of the trickiest issues the Air Force or another service may have to face: what the Pentagon can do on American soil." Indeed.

Military analyst William Arkin wrote about these particular Air Force games, meant to boost "laser, high-powered microwaves, and acoustic weapons," at his Washington Post Early Warning blog. Such blue-sky exercises, he explained, advance new weapons systems (and their corporate sponsors) "along the familiar development path of boosters and patrons feeding information to war gamers who feed study participants who feed researchers who feed manufacturers. At the end of the day, it is hard to tell whether high powered microwaves and laser came into being because someone conceived it out of need or because its existence in the laboratory created the need."

To let inventive minds roam free outside normal frameworks is in itself an inspired idea. But I bet there's no DARPA-like agency elsewhere in the government funding the equivalent for education 2025 or health 2025 or even energy independence 2025. To have this happen, I'm afraid, you would have to transform them into Northcom war games.

Now it's true that much of the blue-sky planning may never come to be. Those U.S. Navy stealth sharks may not patrol our coasts, and a good, swift enemy kick to some unexpected spot on BigDog's anatomy may fell the "creature," if budgetary or high-tech wrinkles don't do the trick first -- just as an unexpected series of low-tech blows to our full-spectrum military has left the Pentagon desperate and the U.S. Army unraveling in Iraq.

Wouldn't it be nice, though, if official blue-sky thinking didn't always mean mobilizing finances, scientists, corporations and even the animal kingdom in the service of global death? Wouldn't it be nice to blue-sky just a tad about life?

This article originally appeared in tomdispatch.com. Special thanks for Pentagon facts and figures in this piece go to Frida Berrigan of the World Policy Institute's invaluable Arms Trade Resource Center. To keep up with the latest Pentagon full-spectrum dominance projects, be sure to check out Noah Shachtman's entertaining as well as useful DefenseTech Web site, heavily mined for this piece, and William Arkin's Washington Post Early Warning blog.