Natalie Portman and Hugo Weaving battle a totalitarian state and its Bill O'Reilly-like mouthpieces in this simplistic adaptation of the pessimistic comic series. 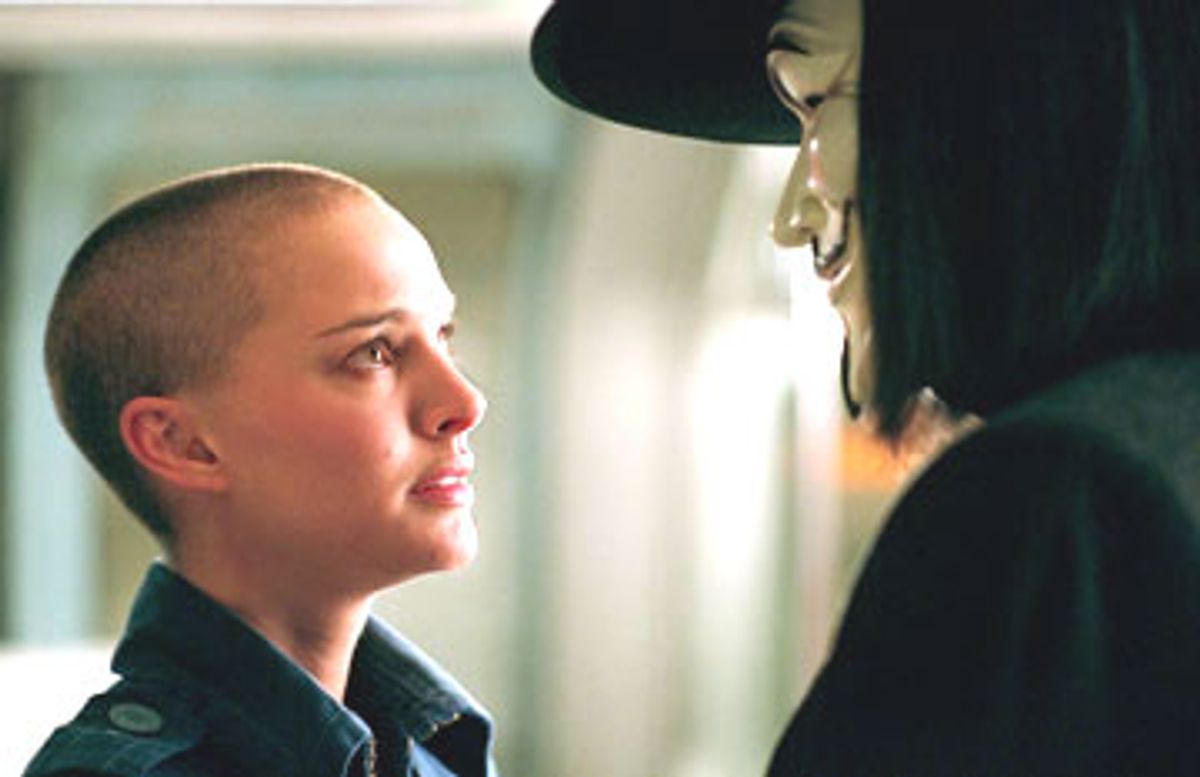 In "V for Vendetta," the movie adaptation of Alan Moore's and David Lloyd's artfully pessimistic comic series of the same name, we never see the face of the hero, a freedom fighter -- or, if you prefer, terrorist -- who goes only by the name "V." The setting is the near future, in a totalitarian Great Britain, and V has enemies of many stripes, including assorted government flunkies, Bill O'Reilly-style TV broadcasters, slimy men of the cloth and doctors guilty of performing unethical tests on internment-camp prisoners. Cloaked in black, his face hidden by a stylized mask in the likeness of Guy Fawkes (the fellow who attempted to blow up Parliament in 1605), V, played by Hugo Weaving, dispatches these baddies, one by one, in the name of freedom.

V's mask is pale and immobile, with rosy florettes on the cheeks and a dashing, devilish pointy beard and mustache. But the mask's most arresting characteristic is its mouth, a curved, static slit that can be read as a contemptuous leer or a kindly smile. That slash of a mouth is a convenient ambiguity -- a way of suggesting a deeply complex character without having to build a complex movie around him. And sure enough, "V for Vendetta" is one of those movies that's hung up on big ideas without ever actually having any. The script is by Andy and Larry Wachowski, who may have at least attempted to retain the gloomy aura of the original comic. (Moore requested that his name be removed from the film's credits; he wants nothing to do with it.) But the finished product, directed by James McTeigue (it's his feature debut), feels far too starched and clean to do its source material justice.

Even if you're unfamiliar with Moore's and Lloyd's original, it's not too hard to see through the movie's timid attempts at topical weightiness, even as it tries (unsuccessfully) to retain some level of comic-book stylization. The quick way to make any movie politically relevant is to insert a reference to the Quran, and in "V for Vendetta" a character is executed, as opposed to being merely imprisoned, for possessing a copy of it -- that's how bad things are in this nightmare vision of Great Britain, and we're supposed to shiver at the possible certainty that in the not-too-distant future, it could happen in our world, too.

That's just one of the movie's many cartoony faux-serious touches, the sort of thing that most graphic novelists worth their salt would probably dismiss as too gimmicky. And for a big Hollywood movie, written by the guys who gave us the "Matrix" series, maybe it's perfectly OK. But "V for Vendetta" doesn't even work very well as an entertainment. It starts out with a certain amount of promise: There is, at least, a pretty exciting explosion early on, when V blows up the Old Bailey -- the plumes of smoke sent up by the blast evolve into a rousing, graphic fireworks display. But after that, the movie creaks lamely along -- frame after frame, you feel the stiffness in its joints.

Although V is the hero of "V for Vendetta," Natalie Portman, as V's protégée, Evey, is allegedly its star. Evey's parents were activists who were killed by the government when she was just a child. She's been "rehabilitated" and has a job at the state-controlled British Television Network. But one night, venturing out on the street after the government-imposed curfew, she's accosted by the henchmen of government slimeball Creedy (Tim Piggot-Smith); they have the authority to rape and kill her, which is what they plan to do. But V swoops in to save the day, whisking Evey to his secret lair (which is furnished with purloined artworks that the evil regime has deemed "inappropriate," as well as a '60s-style jukebox). From there, the two forge an uneasy, borderline-romantic friendship, and although Evey keeps running off to be on her own, there's something about V that keeps drawing her back.

Portman is a charming, assured actress, and she's pleasant enough to watch here. Weaving (who played Agent Smith in the "Matrix" films, as well as elf leader Elrond in the "Lord of the Rings" pictures), on the other hand, has the misfortune of having to recite slogans like "People should not be afraid of their governments; governments should be afraid of their people." Even so, he manages to give his character some believable physical nuances: His bearing, at least, is convincingly elegant.

But among the movie's sprawling cast -- which also includes an excessively droopy-looking Stephen Rea as the hangdog Chief Inspector Finch, and John Hurt as tyrannical figurehead Chancellor Sutler -- only Stephen Fry, in a smallish role as Evey's temporary protector, Dietrich, gives the movie any real emotional resonance. Fry is a beefy bear-hug of a fellow, and that, as well as his openhearted affability, makes us understand how deeply out of place Dietrich is in this dark, pinched world.

Even as V intones his tiresome slogans, the only time you really feel there's anything at stake in "V for Vendetta" is when Fry is on-screen. His Dietrich represents joyous individuality in a world of fascist conformity. But there's too little of him, and mostly, "V for Vendetta" is a joyless, jumbled screed, a meditation on the evils of totalitarianism for people who don't really want to think too hard about it.

I'm not a huge fan of Moore's and Lloyd's "V for Vendetta," which was originally published in Warrior Magazine in the U.K. in the early '80s, during the reign of Margaret Thatcher (and which DC Comics collected in a single volume in 1990). I have a problem with "ambiguous" heroes who are really just thinly disguised assholes, and in the book (as in the movie), V pulls some nasty mind games with Evey that caused me to lose patience with him.

Still, I can't help admiring the book, and I can't say I wasn't affected by it. What comes across in Lloyd's vivid, gritty drawings, and in Moore's spare, elegant language, is a sense of mounting dread and despair. The movie version of "V for Vendetta" both oversimplifies and overcomplicates Moore's and Lloyd's vision, but it never cuts to the bone. It's a movie drawn with big, bold strokes and very little feeling -- a tracing-paper exercise masquerading as a masterpiece.