Armed with crayons, Macaulay Culkin makes his literary debut -- and tries to work out his daddy issues. 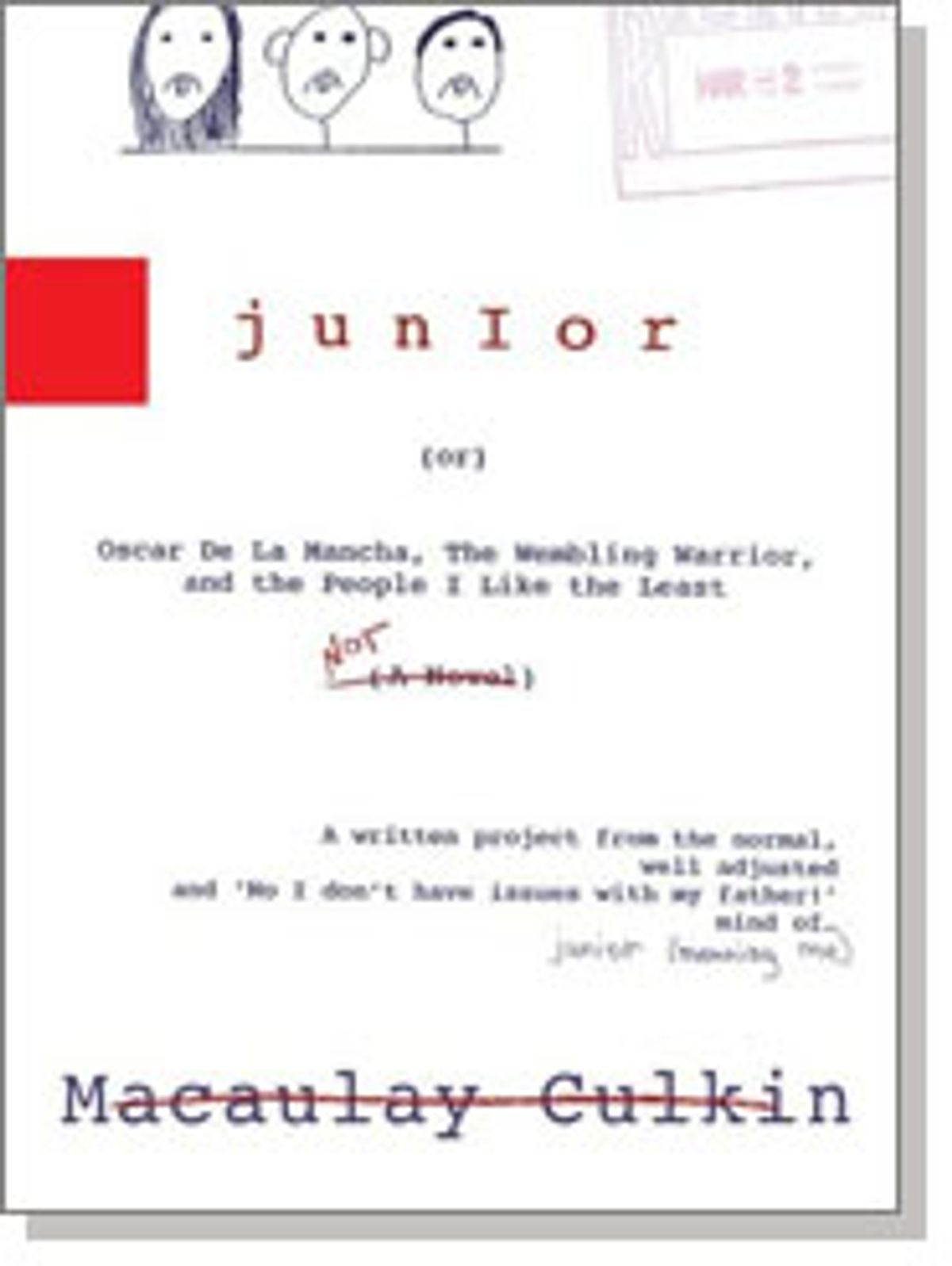 I remember seeing Macaulay Culkin on the street once. He attended the Professional Children's School, a private school for children pursuing careers in the arts, a few blocks down from my own school for regular kids. It wasn't uncommon then, in the hours after classes let out, to see stylish teenagers puffing cigarettes and talking on cellphones -- long before everyone had cellphones. But Culkin was clearly not one of those kids. He walked alone, dressed in ratty black clothes, his skinny frame drowning in a huge black trench coat. He looked unhealthy, skeletal, nothing like the impish characters that made him, for a short time, frighteningly famous. I gawked at him as he dropped his cigarette and slithered into a cab. He was successfully on his way to becoming un-famous.

Now Culkin has written a book. Quite possibly you've caught his too-quick laughter on the talk show circuit over the last few weeks, or witnessed his eagerness to express just how happy he is. Or maybe you read the profile in New York magazine that almost succeeds in convincing readers that Culkin is just an ordinary, dog-owning, pool-playing New Yorker. Alas, what none of these promotions for "Junior" did was talk about what is actually in the book. Culkin has described it as "the kind of book you can pick up in the middle" or "start from the end"; "Good Morning America" host Charles Gibson, who gave "Junior" a good college try, admitted to having "no idea" what he had read. But after all the polite giggling faded out we were no closer to knowing what Culkin wrote. Salon is here to enlighten you.

Despite packaging "Junior" as "part fictional memoir," it is difficult to take the idea of a fictitious narrator too seriously here. The "fictional memoir" is told by a former male child star who has a dysfunctional relationship with his father. Hmm. In interviews, Culkin has been questioned about events in the book as though they are fact, and Culkin makes no pretense of convincing us otherwise. (For instance, both Culkin's and "Junior's" penises are named Floyd.) And while Culkin never identifies the narrator as himself, who else are we to take him for when he writes, numerous times, "junior (meaning me)"?

The book itself reads more like the kind of free-associating writing exercise a therapist would prescribe to a patient than an actual story, and in fact, our narrator Culkin/Junior reveals that a therapist once suggested list-making to deal with "abandonment issues," though we are left mostly with the cataloging, not the issues. A good portion of the book is devoted to lists -- things he hates, things he loves, things that are important to him, things he regrets and things he wants to do before he dies. Almost every list begins with the entry "Dad," and had Culkin gone with this impulse -- exploring the damaging impact his father had on his life -- he may have produced a juicy portrait of family life under the weight of celebrity. Unfortunately, Culkin barely skims the surface of his family drama and leaves us instead with kindergarten sketches about eating poop.

It is this sort of juvenilia that makes reading "Junior" a breeze, easily accomplished in a single sitting; the 200 pages of mostly incoherent rant, intermingled with some imagined correspondence to his father and mother, and crude comics thrown in for good measure, will take no more than one hour. New York magazine used the catch-all disclaimer "postmodern" to describe the book. In this case postmodern seems to mean nonsensical text with drawings, which distract from any semblance of narrative. His attempts to challenge his reader and put his thoughts on display in a nonlinear way go further to illuminate Culkin's pretentiousness than his inner soul.

Sadly, even the paragraph and a half where Culkin tells us, quite seriously, about the method he would use to commit suicide (pills) does not transcend his literary antics. The book begins and begins and begins -- there are three introductions and nearly every chapter starts with "The End" -- but doesn't really go anywhere. Rather than examining and reflecting on his life, as a memoirist might, or writing a wholly invented tale, Culkin mostly remains obdurately in his head, a place, like most of our heads, that is interesting only to ourselves -- and occasionally our parents.

Of course, even in this book there are a few passages where his writing picks up steam -- where Culkin toys with the impulse to dish unself-consciously about growing up in his family -- and these moments are as upsetting as they are refreshing. The passages he dedicates to the senior Culkin ("DAD" -- Parts 1, 2, 3, 4 and 5) are moving -- alarmingly so -- if for no other reason than that the brutal humiliation young Culkin suffered under his father seems to be as painfully vivid for Culkin today as it must have been then. In one of the more memorable episodes, Culkin's dad has allowed his 13-year-old son to rent a hotel room with friends for an unsupervised party. The boys trash the place as 13-year-olds are wont to do; Culkin is awoken by his father "dragging me out of the room by my face." In the hallway, his dad lines up all of his friends and one by one offers to pay them $20 if they promise never to speak to his son again. All but one of them take the money, yet, as Culkin remarks, "It wasn't the shame of him paying my friends off that made the experience painful. It was the fact that he was right. My friends were a bunch of freeloaders who took the money and ran. This was a test that I didn't know I was taking, and I failed." After years of tabloid drama about the Culkins, the story offers an unsympathetic, bare-bones view into the hell it must have been living as a child in that family. Less successful are the moments where Culkin writes about how hard it is to articulate his feelings toward his father, as in the following:

Child actors grow up mostly around adults and deal with adult-world paychecks and expectations that inevitably bring about an accelerated adulthood. They -- these children whom we are quick to jealously embrace and quicker to drop as freaks and has-beens -- are not afforded the same mistakes that most children are. It seems impossible that this shortened childhood would not also stunt one's growth -- this certainly seems to be the case with Culkin, who was signing legal papers at 14, married and divorced by 25, but who seems unhappily stuck in a solipsistic adolescence. And surely the fact that he still looks 12 and his book's title is the moniker for a young person don't help much, if he wants to be taken seriously.

Toward the end of the book Culkin looks through a scrapbook of his stardom and, shuddering at the clippings, he remarks: "People had something to say about everything in my life. And when there was nothing to talk about, they just made things up. It didn't matter how old I was or what it did to those around me or what people were starting to believe; they just wanted to use me to sell magazines. I wasn't even sure what was true or not anymore." Not only is this the most straightforward, unself-conscious passage in the book, it is also one of the clearest reflections on fame I've read. And perhaps it provides insight into why he chose to write the book in the first place -- to figure out what was true and what was not, to separate himself from Macaulay Culkin of the silver screen. Yet even if Culkin were to achieve a separation between his self and famous self, I'm not sure that matters to anyone other than, well, himself.