In this week's New Yorker, Calvin Trillin writes an astoundingly beautiful portrait of his marriage to his late wife, Alice. Read it and learn. 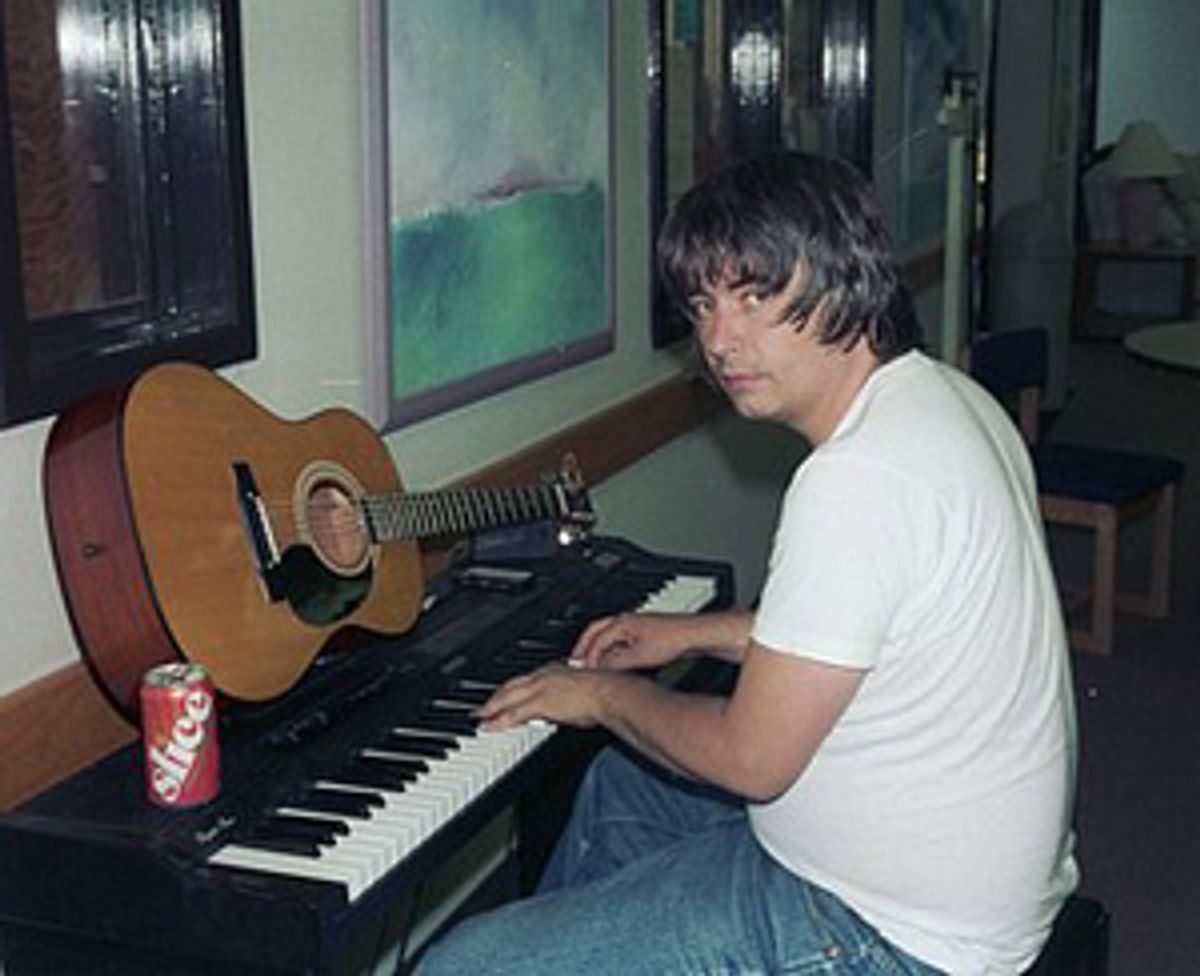 Consider this a very personal recommendation, from someone who is not usually in the business of telling people to shell out for other publications: Go out and buy this week's New Yorker, the one dated March 27, 2006, with a drawing of a baby in a barbed-wire crib on the cover. In it, you'll find one of the saddest, funniest, loveliest stories you've read in a very long time.

Ask me who my favorite journalist is, and I will give you the same answer that I've given since I was about 8 years old: Calvin Trillin. When I was a kid, my dad used to read out loud to me from what is now sold as one book called the "Tummy Trilogy," but was then separated into three volumes: "American Fried," "Alice, Let's Eat" and "Third Helpings." These collections, compiled when Trillin was doing his "U.S. Journal" columns for the New Yorker in the 1970s and '80s, chronicled the author's adventures as he sniffed out local delicacies across the nation. He approached his task with the single-mindedness of a truffle-hunting pig, except that in place of truffles, Trillin was usually rooting around for, say, the nation's choicest Buffalo wings, or a sausage you can easily consume while standing. The essays were one-third about food, one-third about the people who produce and consume that food, and one-third about his frequent culinary co-conspirators: wife Alice and daughters Abigail and Sarah.

In many ways, it makes sense that my dad read these stories aloud to me as if they were children's books: They were funny, and in some cases they were about places -- or at least about foods -- that I loved and recognized. Often, they reminded me of our family. Abigail and Sarah were a couple of years older than my brother and I, but I didn't know that then. To me, they were just opinionated and loquacious little girls, like me! And Calvin -- I now know that everyone calls him "Bud," but that feels sort of impertinent -- and Alice were like my parents: he of the boundless energy and appetite, she of the endless patience and prudence.

So I was raised on these essays -- about finding a space worthy of "Beautiful Spot: The Magazine of Parking" on a trip to Russ & Daughters and Ben's Dairy on the Lower East Side. In fact, my dad's version of that line -- announcing, "Perfect Spot: The Magazine of Urban Parking!" every time he slipped the car next to a premium piece of curb -- became one of my family's in jokes. I heard about the joys of Arthur Bryant's barbeque and Winstead's burgers in Trillin's native Kansas City, Mo., about his friend Fats Goldberg who lost a hundred pounds by eating pizza and practicing "controlled cheating," and about how he and Alice pacified one toddler daughter on a trip to Europe by keeping her in a steady supply of hard rolls on which to gnaw. (If I have misremembered any details, it is because my brother, about to have a child of his own, has chosen to ease his way into fatherhood by borrowing my damn copy of the book.)

When I got older, I grew to love Trillin's other work, including his very serious book "Remembering Denny," about the social, professional and sexual pressures faced by a former Yale classmate who wound up ending his own life; "Floater," his considerably lighter send-up of newsweeklies; and the featherweight gut-buster "Runestruck," about a Maine town where the only black man runs Wong's Garden of the Orient restaurant and where two gas station attendants find an ancient Viking stone, publicly translating it as meaning: "I don't know but I've been told that Eskimo nookie is mighty cold."

But whatever my admiration for his whole body of work, the core of why I love Trillin has been the way he wrote about Alice. Again, it's probably because it made me think of my parents' relationship: In his prose, Alice placidly policed her crazy husband's boundaries; she was reason and virtue and practical good sense. As Trillin has written and many others observed, she was George to his Gracie, the affable killjoy who (tried to) forbid him more than three meals a day. I also think I imagined being Alice myself: having so curious and silly a mate to frolic around the country with, playing the stern disciplinarian while clearly having the time of my life, not to mention scoring a husband who loved me so enthusiastically that that love jumped from the page like an overeager Labrador, knocking over anyone who happened to be giggling over one of his books.

She was a teacher, and a writer of some pretty stunning prose of her own. She wrote a review of "Alice, Let's Eat" in the Nation that should be published alongside the next printing of the book. Much of her subject matter was of a more serious nature. A non-smoker diagnosed with lung cancer at 38, she underwent radiation treatment and had a lobe of her lung removed in 1976. She wrote about her long-shot survival of this deadly form of cancer in several places, including the book "Dear Bruno," and in a very famous essay for the New England Journal of Medicine called "Of Dragons and Garden Peas." In 2001, she wrote a New Yorker piece about her 1990 scare that the cancer had returned, and about the kinds of choices patients make while navigating power-charged relationships with their physicians. She died on Sept. 11, 2001, not of cancer but of heart failure, precipitated in part by the damage done 25 years earlier by the powerful radiation treatments she received. I distinctly remember reading her Times obituary and realizing that it was the first time in days that I'd cried about something that didn't have to do with the terrorist attacks.

And so, when I saw this week's New Yorker story, "Alice, Off the Page," I settled down to read it quietly, privately, at home. Imagine my surprise upon discovering -- within the first few paragraphs of Trillin's 12-page remembrance -- that I was not the only person who loved Alice, who mourned her passing, or who admired her marriage without having met her or her husband. He writes of getting condolence cards from many people who never knew her, including one from a young woman in New York who wrote that sometimes she looked at her boyfriend and wondered, "But will he love me like Calvin loves Alice?" (She evidently didn't feel comfortable calling him Bud, either.)

Imagine my further surprise, and abashment, upon reading Trillin's speculation about what Alice would say to all those sympathetic correspondents who had encountered her only in his pages: "They're right about that ... they never knew me." Gulp. She -- as invoked by her husband -- is right. I never knew her. I had fallen for the matriarch in what Trillin describes as a sitcom version of his marriage. And I had thought she was real.

The self-flagellation over, I read on. And what I found was Trillin's endeavor to bring her to life more completely than he did in what he feels were his caricatured broad strokes. He writes of her early caretaking of her own parents, her complicated relationship with their daughters, and about her affection for expensive footwear that belied the image some readers may have had of her as a "dietitian with sensible shoes." He remembers their meeting, and his lifelong need to impress her. He recalls Alice's letter-writing, her work in remedial education at Hofstra and City University of New York, the impact of her beauty, her enthusiasm for interior decoration. He describes his late wife's attitudes about money, and cigarette companies, and illness. And though he does not describe his grief at her passing -- instead lingering on his terror during her 1976 cancer battle, and a crippling realization that she could have died that left him "pole-axed" in an airport several years later -- it shimmers from every page. This is a stunningly delicate -- and hilarious -- portrait of a marriage.

And I feel sort of bad about this -- because I was truly chastened by the observation that, technically, I never really knew her -- but Trillin's story did not change the way I feel about Alice at all. Because I never thought she wore sensible shoes, or that she, in being T.M. for "The Mom," as he still delights in describing her, would have missed out on some of the fun. For anyone who has known a George-and-Gracie couple, or has been half of one, it should be abundantly clear that the prudent partner has chosen a life with the "marginally goofy" mate for a reason -- presumably, a marginal goofiness of their own -- and that the marginally goofy person chooses a rudder because he or she wants, on many levels, some light steering. After years of reading about the Trillin family adventures, I want to assure him that at least from this child's perspective, it would have been hard to imagine Alice as anything other than a riot with her own abundant appetites: Her merriment and vitality shone through as clearly as his affection for her.

And so, while, as someone who never knew Alice, my take may not have any bearing on reality, I tell Calvin/Bud this: You didn't have to say this, any more than you had to share your wife -- or some chiaroscuro projection of her -- with us. But I'm so glad you did.