A portrait of the blogger as a young plagiarist

As a college student Ben Domenech lifted arts criticism; as a GOP henchman, he was accused of fabricating a Tim Russert quote. What was the Washington Post thinking? 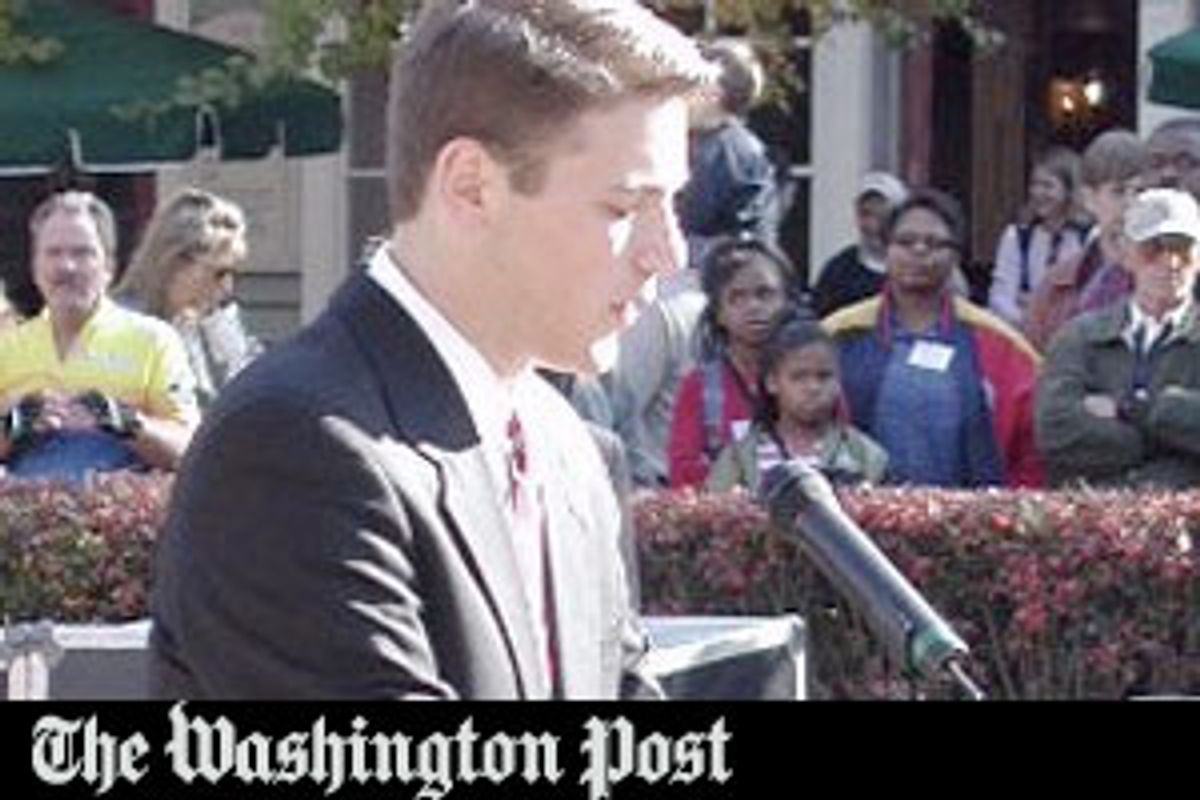 Does the Washington Post intend to maintain journalistic standards in the brave new blogosphere? Or are those standards incompatible with the Post company's ambitions for WashingtonPost.com?

Those questions arise from the Post's hiring of Ben Domenech -- best known as a founder of RedState.com, but also known as a Bush appointee, and the son of a Bush appointee, and as a contributor to National Review Online -- to write a daily blog on the newspaper's Web site. That decision by Post management has provoked much speculation about its motive for employing Domenech. Many observers surmise that Domenech was brought on to "balance" Dan Froomkin, the popular White House Briefing blogger on WashingtonPost.com whose skepticism and wit have provoked whining from the right -- and defensive reactions from certain Post reporters worried by accusations of "liberal bias" at the paper.

Media watchers will remember that the Post's internal thrashing over Froomkin's column led to the Web site's last major public stumble, when it removed blog comments from a post by the paper's ombudswoman, Deborah Howell (after an imbroglio that began over Froomkin's column and continued over Howell's imprecise post about allegedly bipartisan political contributions by GOP lobbyist Jack Abramoff.) In their eagerness to appease critics on the right, the Post editors have blundered again. Whatever Froomkin's political views may be, he is a veteran reporter with a long résumé of newspaper jobs, including a decade at the Post. Domenech is a partisan operative with no newsroom experience of any kind, no training in journalistic standards and ethics, and nothing to guide him except home schooling and Republican reflexes.

Almost immediately the liberal blogosphere exploded with outrage over Domenech's hiring by the Post. But by Thursday bloggers had more than ideological reasons to oppose the Post's move, as Atrios, Daily Kos and other sites uncovered brazen examples of plagiarism by Domenech when he was writing for a student weekly at the College of William and Mary. Ironically, the young right-winger was apparently fond of Salon's film criticism, at least, because he plagiarized film critic Stephanie Zacharek, and Mary Elizabeth Williams as well.

Domenech failed to reply to an email for comment, and as of this writing, it's not clear whether those plagiarism revelations will be enough to end the right-wing blogger's MSM career. His defenders may say Domenech was only a college student when he made those mistakes. But there's at least one instance in his post-college career when the blogger was accused of another major ethical breach -- a charge that he fabricated a quote by "Meet The Press" host Tim Russert back in June 2002, in an attempt to get his hero, President Bush, out of a political jam.

Back then, the world of Washington journalism was roiled by a debate over whether President Bush had said during the 2000 campaign that despite his commitment to a balanced budget, he might permit federal deficits in time of "war, recession, or national emergency." The president and his spokesmen insisted that he had referred to such a "trifecta" of disaster during a campaign stop in Chicago, but no text or recording existed to prove their point. (That was before the Iraq invasion, when Bush could still hope to maintain his reputation as a "straight shooter.")

As the "trifecta" dispute boiled up on the Sunday-morning talk shows and on blogs, Domenech leapt to Bush's defense on his own blog, the Ben File. In a post dated June 16, 2002, he brashly upbraided two of the president's critics on the deficit issue, Jonathan Chait of the New Republic and Tim Russert, NBC bureau chief and the host of "Meet the Press":

"The bigger issue," wrote Domenech, "is that Russert and Chait both claim the President never made caveats about deficits during times of crisis, that he's creating political cover out of thin air. They're wrong. Indeed, President Bush expressed his deficit views very [word missing] during the first New Hampshire debate on January 7, 2000 -- moderated by none other than Tim Russert: 'This is not only no new taxes, this is tax cuts, so help me God' -- Bush said, brushing away the prospect that national emergencies, such as war, might get in the way. Such developments would be 'extreme hypotheticals,' he said. 'If I ever commit troops, I'm going to do so with one thing in mind, and that's to win,' Bush said. 'And spend what it takes? Even if it means deficits?' asked the moderator, NBC's Tim Russert. 'Absolutely,' Bush replied, 'if we go to war.'" (AP, from Boston Globe)

"Does that refresh your memory, Tim?" he concluded mockingly.

Unfortunately for Domenech, his June 16 post drew the attention of Brendan Nyhan, one of the trio who then ran Spinsanity.org, the (now lamentably defunct) political fact-checking Web site. With a series of simple searches on Nexis and Westlaw, Nyhan learned that the electronic archives contained no such article. There were versions of an AP story that resembled the article cited by Domenech -- but none of them included that crucial question attributed to Russert: "Even if it means deficits?"

Challenged by Nyhan to produce proof that this story had ever been published, Domenech responded with a series of feeble non-answers.

"For anyone who doubts the veracity of the original quotes I posted from the AP article, I'm not currently at a computer that has WestLaw access, so I can't post the thing in its entirety at the moment (I've only got a printed copy)," he wrote. "And while it's not like I have a taped copy of the debate to check the article against, I tend to trust the AP, especially when there's no official MSNBC transcript." Then came an update acknowledging that he may have misquoted Russert, blaming the AP: "I've listened to the online version of the [New Hampshire] debate now, and I don't hear the second part of Russert's question as printed in the AP article. Considering that most accounts of the debate don't include this part of the question either, I'm close to believing that the AP article I have is inaccurate. I've been taken in by faulty reporting before, but never by the AP. Either way, I'll post the article tonight." Domenech then posted a second update that he claimed was a link to "the [Globe] article." He added, "Still, I think that it's an unreliable source." He linked to another page on his site that showed a very peculiar version of what was supposed to be an AP article in the Boston Globe on the New Hampshire debate, dated Jan. 7, 2000.

Among the various problems in this strange saga is that the Globe sent its own reporters, Jill Zuckman and Michael Kranish, to cover that New Hampshire debate. They filed a Jan. 7 story that accurately reflected what Russert had asked. Nexis shows no AP story in the Globe or anywhere else that includes the quote used by Domenech.

Was this an honest mistake? Or did Domenech fabricate a quote in order to attack Russert and other Bush critics? As Nyhan noted the other day, readers can draw their own conclusions.

But the examples of plagiarism that surfaced Thursday certainly add to the reasons to believe the earlier allegation. Even before the plagiarism story emerged, Media Matters was calling on the Post to terminate Domenech, because of the Russert quote-fabrication charge as well as an ugly post on Redstate.com referring to Coretta Scott King as a "communist" and other obnoxious commentary.

The Post may be deaf to complaints about overheated rhetoric and insults to a civil rights hero, but the plagiarism and quote-fabrication charges can't be ignored. It's hard to imagine Domenech will survive this, but whatever happens next, the Post's failure to adequately vet its new hire in its fretful search for "balance" could damage its credibility substantially. For now it looks like the paper hired the love child of Janet Cooke and Donald Segretti.