Is the Stones' Brian Jones, a temperamental rocker who met a tawdry end, the perfect subject for a biopic? Or is he a rotten one? 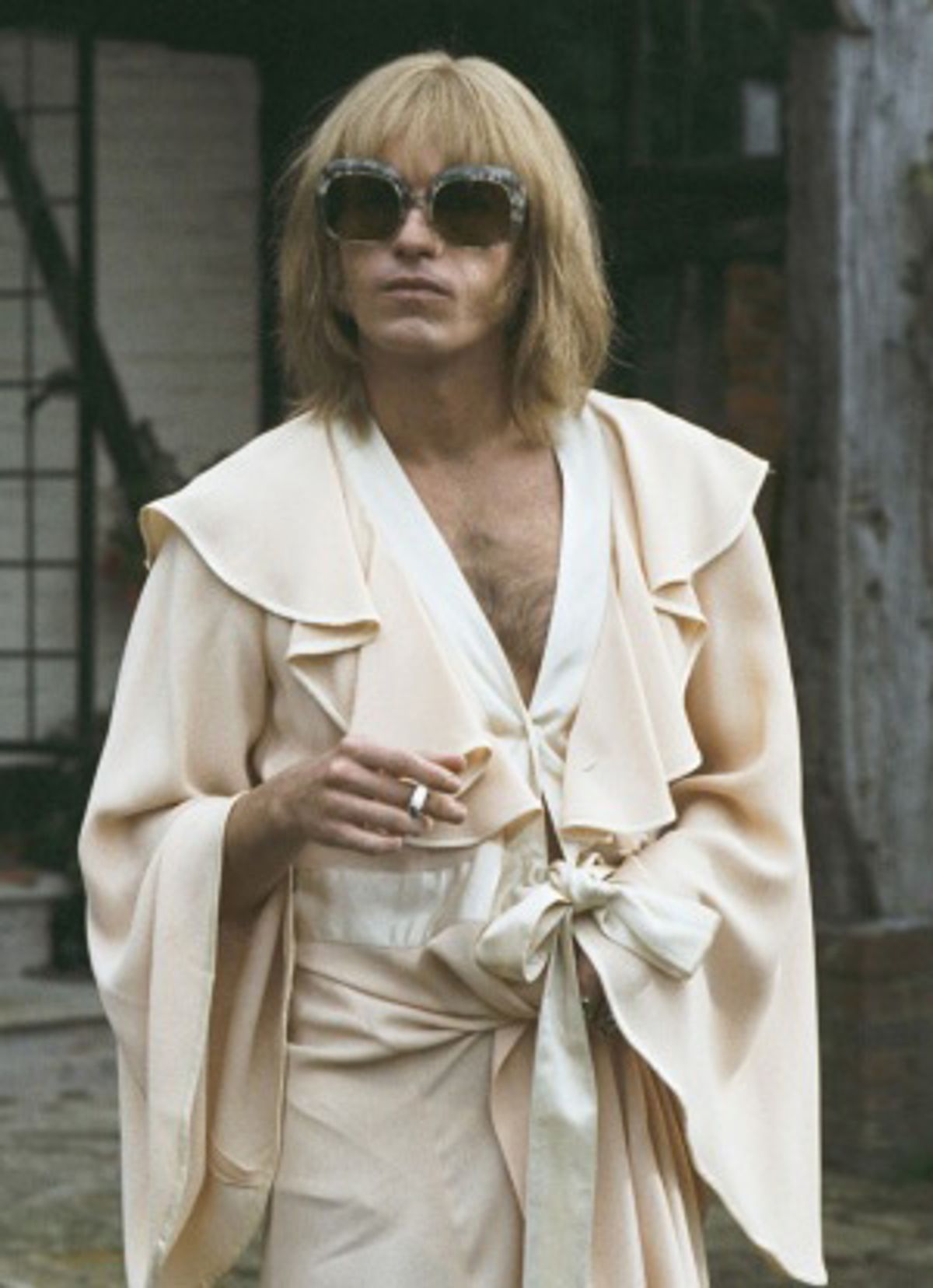 We're used to thinking of rock stars who die young as tragic heroes, and in theory Brian Jones, who died under mysterious circumstances in his own swimming pool at age 27, ought to fit the bill. His story is definitely tragic, and he did found one of the greatest rock 'n' roll bands in history.

But beyond that, there's not much that's heroic about Jones. Pictures and vintage footage -- the only way most of us have seen him -- show us a curious combination of heartthrob and troll: Beneath that flaxen bob, the hair of a mod angel, his features are beautiful from some vantage points, but there's always something blank and secretive about his eyes. In his wild little memoir of London in the '60s, one-time Rolling Stones manager Andrew Loog Oldham describes seeing Jones for the first time onstage, in 1963: His "ugly pretty, shining blond Barnet was belied by a face that already looked as though it had a few unpaid bills with life. His head, having forgone a neck, slipped straight into a subliminally deformed Greystoke body."

That description might sound cruel if, at least from the admittedly comfy armchair of hindsight, it didn't seem so apt. And whatever Jones' gifts as a musician may have been, the bald truth is that nobody seemed to like him much as a person. When he died, his bandmates, friends and associates may have expressed the appropriate amount of grief, but many of them couldn't help adding an "it was bound to happen" shrug, as if they were relieved not to have to deal anymore with his selfish complexities.

Is Jones, a classic example of rock-star excess who met a tawdry end, the perfect subject for a biopic? Or, as a model of deep self-absorption, is he a lousy one? In "Stoned," Stephen Woolley's take on Jones' life and death, he's both. The movie opens with a vision -- let's call it a possible vision, since there were no witnesses to the scene -- of Jones' death. It's a glimmering summer evening at Jones' estate, Cotchford Farm, the charming property formerly owned by "Winnie the Pooh" author A.A. Milne. As Jones (played by young newcomer Leo Gregory) drifts, unconscious and alone, to the bottom of his pool, a statue of Christopher Robin looks on with sinister indifference: Perhaps not even Christopher Robin cares if Brian Jones dies or not.

From there, "Stoned" takes us backward and sideways in a series of flashbacks, touching lightly on Jones' youth in Cheltenham (and his aptitude for getting young girls pregnant and not giving a fig about it), his obsessive relationship with Anita Pallenberg (played here by Monet Mazur), whom he'd later lose to Keith Richards, and his flamboyant self-destructiveness. As he explains matter-of-factly to Frank Thorogood (Paddy Considine), the builder who's been hired by Stones tour manager Tom Keylock (David Morrissey) to do some work at the farm, "People think I'm a druggie, but I'm not anymore. I'm just a boozer."

"Stoned" fixates on the increasingly twisted, if somewhat symbiotic, relationship between Thorogood and Jones: Thorogood hires a crew of builders to help with the work and proceeds to complete it in earnest, unaware that the Stones' management, frustrated by Jones' mounting extravagance as well as his unreliability, is going to stonewall him when it comes to payment. Thorogood becomes Jones' baby sitter; he's expected to be on call at all hours, to make sure Jones' capriciousness doesn't get him into trouble. Jones returns the favor by humiliating Thorogood. In one scene, he invites the contractor to prove his manhood to Anna Wohlin (Tuva Novotny), the rock star's nubile young Swedish girlfriend, by doing numerous sets of push-ups. Anna teases Thorogood into a state of embarrassing tumescence, before announcing, in a flat Swedish accent, that she prefers brains to brawn. Jones looks on, a cruel satyr who's thrilled with his little joke.

The scene is both so appalling and so over-the-top absurd that you can't help laughing at it, and that's pretty much the effect of "Stoned" overall. There are sequences that are so ridiculously goofy you can't believe Woolley is actually attempting to pull them off with a straight face: In a scene where Pallenberg introduces Jones to the joys of acid, Jefferson Airplane's "White Rabbit" -- what else? -- swells on the soundtrack. Jones loses himself in a hallucinogenic swirl, giving Woolley a convenient excuse for a decadence montage straight out of Kenneth Anger: Seminude, handcuffed blondes writhe in ecstasy as their tender flesh yields to the crack of a whip; an unidentified animal's throat is cut, presumably in a blood sacrifice to the gods of exploitation cinema.

"Stoned" is simultaneously at its best and worst in scenes like these, when it loses itself in its fervid voodoo dance of sensationalism: We may be laughing, but we can't take our eyes off the screen for a second. The movie's vision of rock-star glamour may be cartoony, but it's the kind of cartoon we can't resist. We giggle when Jones flounces into the garden coyly wrapped in an Ossie Clark dress, but that's just the kind of eccentricity we want from our crazier rock stars. (The costumes in "Stoned," from Pallenberg's louche-luxe caftans to Keith Richards' Tibetan-lamb chubby jacket, are pleasingly authentic, with the exception of one blouse that I pegged immediately as H&M circa 2003 -- I know, because I own it.)

The music in "Stoned" consists largely of old Robert Johnson and Willie Dixon numbers (some of them newly covered, by the likes of Marah and the White Stripes), a way of tapping the Stones' (and Jones') early influences, but also, obviously, of dancing around the fact that the rights to actual Stones songs proved maddeningly elusive. The songs work well enough. What's really missing in "Stoned" is any sense that Jones is a character worth caring about, besides any interest we may have in the seamier details of his story.

This is Woolley's first movie as a director, although he's had a long career as a producer. (His credits include numerous Neil Jordan pictures, among them "Mona Lisa," "The Good Thief," and "Breakfast on Pluto.") Woolley worked more than 10 years to bring the story of Brian Jones to the screen. But what we really need from "Stoned," the very thing that it fails to give us, is a sense of Jones as a human being. Gregory works hard to show us Jones' manipulative, passive-aggressive side. But, perhaps partly because he's saddled with a god-awful helmet of a wig, he can't manufacture enough charisma to make us understand why anyone could have fallen under Jones' spell -- and in real life, plenty of people did, if only for a time.

Considine, a superb actor, has some wrenching, delicately shaded moments. But in the end, "Stoned" made me feel queasy and unclean -- as if, when it came right down to it, not even Woolley could find much to like about Jones, and so instead turned his story into an old-fashioned tale of bloody murder. In Woolley's telling of the tale, Thorogood begins taking advantage of the drugs and booze that Jones and Anna handily keep around the house, believing that he can insinuate himself into Jones' circle. And when Jones cruelly and abruptly fires him, his resentment boils over into murderousness.

Although Jones' death was ruled accidental, Woolley and scriptwriters Robert Wade and Neal Purvis choose to frame Jones' death as a clear case of murder, presenting a vivid tableau of what might have happened as if it actually did happen. A title at the end of "Stoned" tells us that Thorogood, who died in 1993, confessed on his deathbed to having killed Jones.

"Stoned" is, the credits tell us, "based on and inspired by" three books positing that Jones (who had only a small amount of alcohol in his bloodstream at the time of his death) was murdered: Geoffrey Giuliano's "Paint It Black," Terry Rawlings' "Who Killed Christopher Robin?" and Anna Wohlin's "The Murder of Brian Jones." But there's something unsettling and unsavory about the way Woolley presents unproven theories as unwaveringly certain fact. He may have researched the events surrounding Jones' death, but he isn't a court of law.

The sad truth is that even shaky theories about who -- if anyone -- killed Brian Jones may be far more interesting than the question of who he was in the first place. Jones may have been one of those very sensitive individuals whose self-protectiveness caused him to be cruel to others. Then again, he may have just been a jerk, a guy who drained the sympathy of those around him like a vampire going for blood. "Stoned," unintentionally, makes a strong case for the latter. It's fun, for a while, to hang out with the temperamental rock star. But in the end, we can't wait to get away from the man.