Let's have a revolution! Does July 14 work for you?

Leave your cellphone, bring some fruit, and protest -- with kindness -- what has happened to our country. 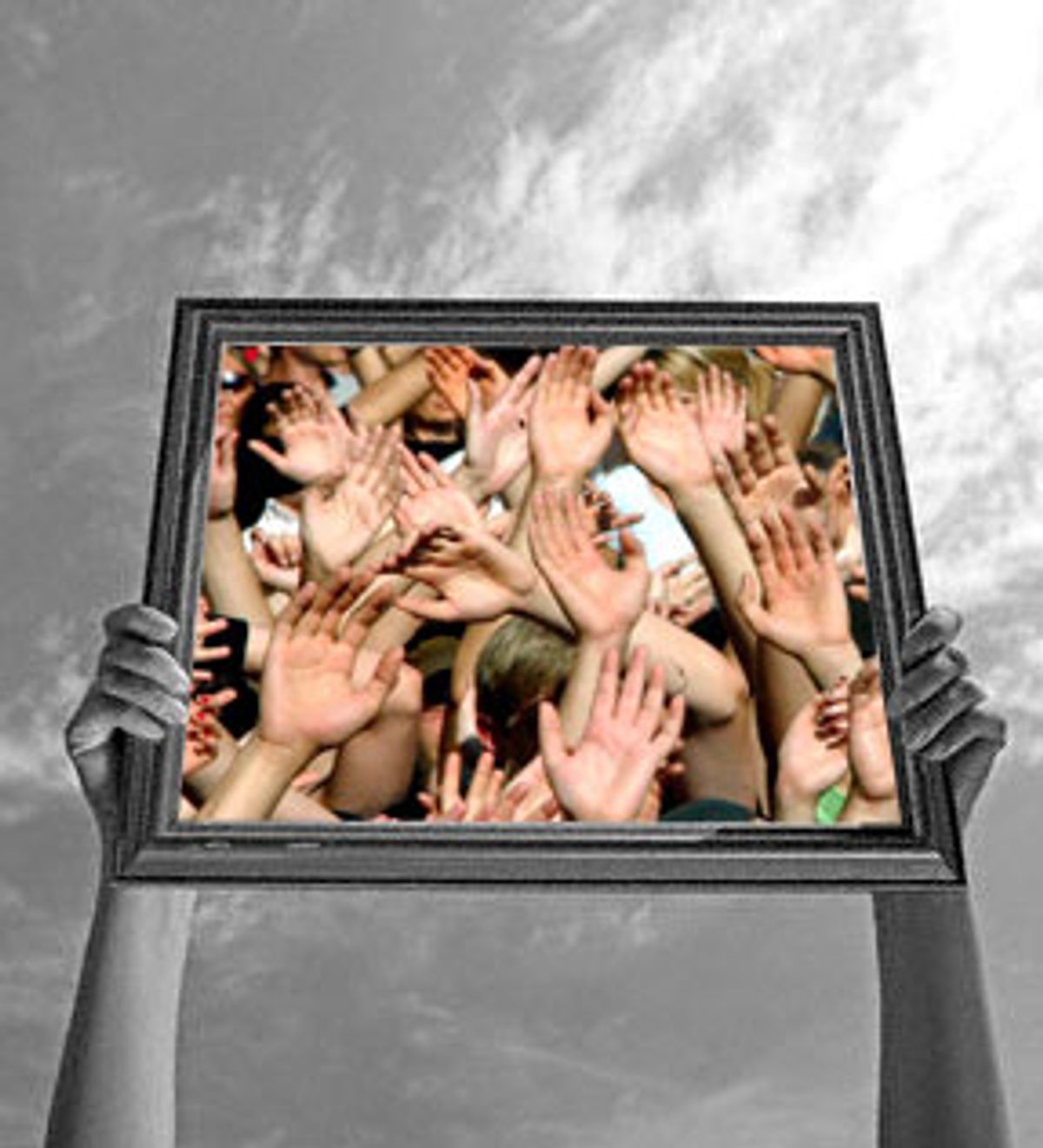 I'm drawn to almost any piece of writing with the words "divine love" and "impeachment" in the first sentence. But I know the word "divine" makes many progressive people run screaming for their cute little lives, and so one hesitates to use it. Also, we all know that there isn't going to be an impeachment any time soon.

However, maybe there is the chance of a calm, polite revolution, and perhaps in lieu of "divine love" we could use the idea of simple "kindness." Consider, just for the sake of argument, how good people, in a democracy that has been taken over by cold, rich, scary, armed white men, might proceed.

Good people who have watched their country's leaders skid so far to the triumphal right would have to do something. I mean, wouldn't they? Am I crazy? Otherwise, those people's children will ask them someday, when we are all living in caves, "What did you do to try and save us?" And the children will be so angry, and they are so awful and unpleasant when they are mad, even in the dark.

I, for one, do not want to answer that I did nothing, or that I ranted and flailed, showing up to support my own interest groups, candidates and concerns.

Instead, I think we should lay down our differences, and have a revolution. I am wondering if July 14 works for everyone.

My father wrote a great novel about an antiwar march in 1970, called "The Bastille Day Parade," in which many protesters carried signs that read, "Turn Off the Lie Machine." In choosing July 14, I would like to pay tribute to him and to the people of his generation, who are surely turning in their graves, as if on rotisseries, with horror about life in their beloved America. They were passionate in their fight against fascism, and Joseph McCarthy, their commitment to civil rights, and to libraries, and to good manners. All of us were raised to be polite, as honest as we could manage, and to live as if the word "fair" meant something, which all sounds a little Amish at this point. A renewal of these values would be the major plank of this revolution.

In this revolution, there will not be any positions except kindness, and libraries. We will not even have a battle cry, as that can lead to chanting, and haranguing: Hey, hey, ho, ho, all that chanting's got to go! We would simply look one another in the eyes, shake our heads, and say, "This just can't be right." We will not try to figure out what it all means: Iraq, Guantánamo, Abu Ghraib, Terri Schiavo, abortion rights, the Downing Street Memo, domestic spying, immigration, the Kyoto Accords, the Geneva Connections, Tom DeLay -- none of it. We all know what kindness means, and I think we can all agree that libraries are sacred, and our revolution will decree that we will fight tooth and nail for these things, politely.

Mostly we will show up and say things like, "Giving India massive nuclear assistance? I don't know -- that just can't be right." "Madge, maybe I'm nuts, but John Bolton, at the U.N.? Can that be right?"

I am hoping for a large turnout even though so few people showed up to mark the third anniversary of the war in Iraq. This was dispiriting, but let's not dwell on it. That was then, almost two weeks ago. This is now. Nearly 50 million people voted for Kerry, and I'm hoping for somewhere in the neighborhood of 20 million (although I know the press will way underreport the turnout). We need precinct leaders to get the word out, although not the kind who go door-to-door while people are eating, then threaten sweetly to come back later. Bitter neighbors are the very last thing this revolution seeks.

We would all show up on Bastille Day, propelled by the ferocious, heartbroken belief we've carried since childhood, that America is a republic, of 50 states, united and humane.

It would be nice if everyone would turn off his or her cellphone that day.

Also, I thought we could all wear green -- not because we have an environmental position we are pushing, but because trees, grasses and the natural world are just so incredibly beautiful and precious. Nature = life. Some will suspect that this is inching dangerously close to a "position," what with everyone in green, hundreds of shades of green -- and if I am being honest, it's true that the tiniest point might be made that a black-and-white worldview, a Manichaean good vs. evil color scheme, is wearing out its welcome.

Additionally, it would be great if everyone could bring a bit of fruit to share, and maybe a few dollars, in case one runs into someone desperately poor.

Bananas are great, as I believe them to be the only known cure for existential dread. Also, Mother Teresa said that in India, a woman dying in the street will share her banana with anyone who needs it, whereas in America, people amass and hoard as many bananas as they can to sell for an exorbitant profit. So half of them go bad, anyway.

Maybe, come to think of it, that wasn't Mother Teresa. Maybe that was Ram Dass, or my neighbor Irmgaard, but it doesn't matter. Trust me: Fruit is a nice touch. Apples, oranges, it doesn't matter, and it would not be mandatory that you bring any fruit at all.

All we would ask is that you show up and help us foment a revolution, based on kindness and that silly old idea our parents taught us, about fairness. Maybe we'd sing "My Country, 'Tis of Thee." No offense in that, really, is there?

But we won't sing that if it is going to stir up a lot of debate and screeds and distraction. I was just thinking that both of my parents died here, on this land that they loved. They were both born abroad. A lot of our parents have died, people who made sure their children read John Steinbeck, Rachel Carson and Langston Hughes. I would show up for my parents, by proxy.

Never mind; we don't have to sing that song. Still, I cry when I hear it.

We will just all come together. Bastille Day. Ix-nay on the cellphones and the speeches. Like Woody Allen said once before I turned on him, 80 percent of life is just showing up. We will show up and foment a loving revolution, wearing green: I just looked up "foment," to make sure that this is what I meant. It comes from the Latin "fomentum," which means a warm poultice. One of the definitions is to apply a warm cloth, dipped in warm water or medication, to a body that needs healing; and that is exactly what I meant.