This long-awaited sequel starts with a bang, then goes limp -- but Sharon Stone is as sexy as ever! 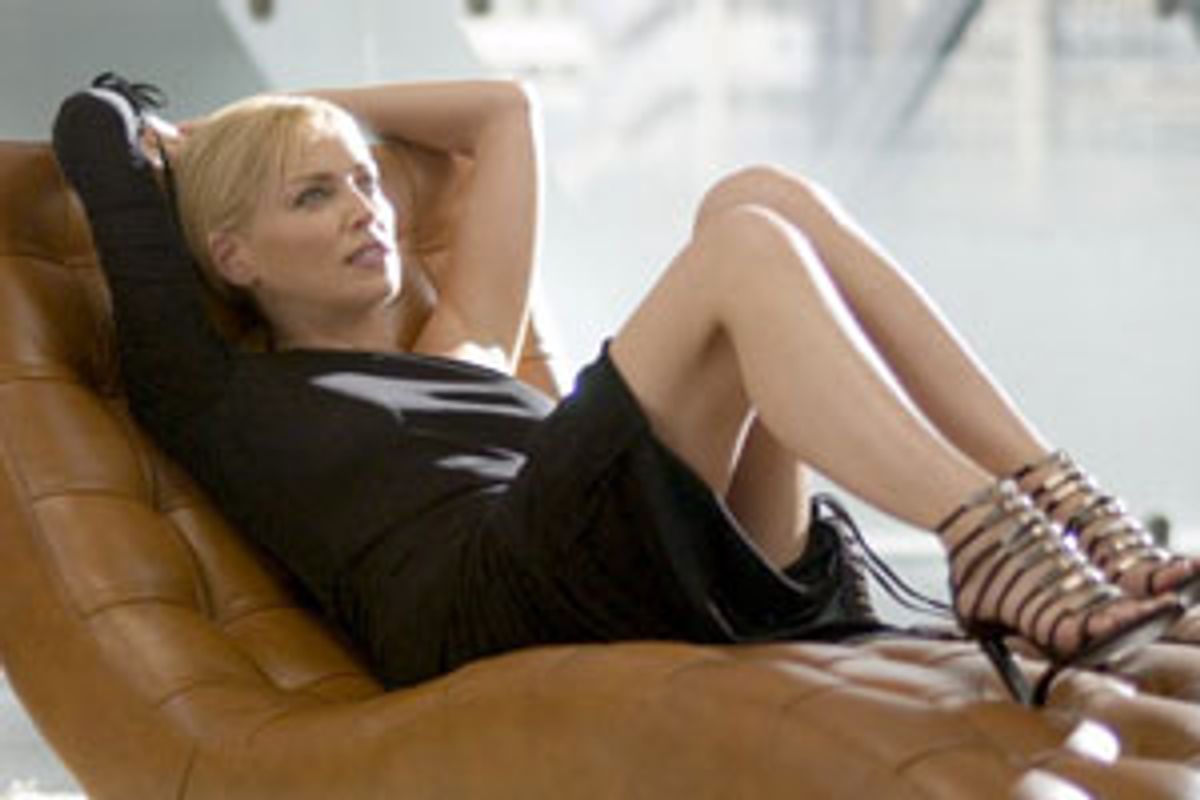 Paul Verhoeven's 1992 "Basic Instinct" may have had plot problems, but it didn't skimp on style, and its star, Sharon Stone, carried the whole picture deftly, as if it were a book perched delicately on the top of her head. The picture's most famous moment occurs in the police interrogation scene, in which Stone's bisexual crime novelist and murder suspect Catherine Tramell flashes a bit of what she's got between her legs. But what I recall most from that astonishing performance is the sexuality of Stone's deportment. Her posture is finishing-school perfect: While everyone at the time commented on the Hitchcockian quality of Catherine's blond French twist, the ghost of Kim Novak's Madeline is more truly alive in her spine, the supple but sturdy conduit that connects her brain to -- well, everything else. Catherine knows her body is perfect; she accepts it as a given. But the way she moves speaks of a more deeply entrenched, and more intimidating, confidence: Yeah, yeah, the rack is great -- but get a load of the carriage.

Fourteen years later, Stone's carriage is as superb as ever (and the rack still looks damn good, too). But that's about all "Basic Instinct 2" has going for it. If you're trying to reinvigorate the art of the stylish thriller, the movie you come up with needs to be stylish and it needs to be thrilling. "Basic Instinct 2," written by Leora Barish and Henry Bean and directed by Michael Caton-Jones, is neither. Catherine has left crazy-daisy San Francisco for stuffy old London, and when we first see her this time, she's driving a snappy little sporstcar -- fast -- while masturbating. There's a cute guy in the seat next to her -- we later learn he's a football star -- and it's all fun and games until someone loses control and drives through a plate-glass wall and off a bridge, plunging into the waters below. (Steering wheels and stick shifts are slippery when wet.) Catherine saves herself but not the footballer. And even though she isn't charged with his death, an investigation spearheaded by rumpled detective Roy Washburn (David Thewlis) and freshly starched criminal psychologist Dr. Michael Glass (David Morrissey) ensues.

"Basic Instinct 2" can't live up to that killer opening: Almost immediately it settles into a shrugging shuffle -- after the first five minutes, it's all shagged out. The movie misses opportunities right and left. Long-leggedy temptress Charlotte Rampling appears as a highly respected psychologist (her name is -- no fooling -- Dr. Milena Gardosh -- Gosh!) with whom Catherine flirts shamelessly: She's hot for teacher, and why not? But don't expect to see the two of them in bed together, rolling around tastefully, or even tastelessly, on satin sheets: "Basic Instinct 2" is too classy for that, which is precisely the problem. Instead, Catherine's chief prey is Morrissey's Dr. Glass, who's not a bad-looking fellow: With his square jaw and trim suit-and-tie combos, he has a Clark Kentish, pre-Beatles respectability about him.

But Morrissey doesn't quite know how to play the uptight professional who's really a tiger inside: Surveying Catherine's naked form in a hot tub, he registers his sexual excitement by making one eye really squinty. Earlier, we've seen him framed neatly, German Expressionist-style, by the crisscrossing windowpanes of his ultra-modern office, which is made entirely of glass. (Dr. Glass -- windows -- get it?)

But, of course, this is a man with secrets, and it's going to take all of "Basic Instinct 2" for us to find out what they are. Caton-Jones doesn't quite know how to approach the material: He's aware of its camp value (how could anyone not be?), but there are whole stretches where he forgets we're supposed to be having fun and takes the whole thing far too seriously. His job might have been easier if he and his actors weren't saddled with such crap dialogue. When Catherine lights up a cigarette in Dr. Glass' office, and he informs her that she's not allowed to smoke, we wait breathlessly for the kicker. There's not much that could top "What're you gonna do -- arrest me for smoking?" But that doesn't mean Barish and Bean should simply give up, which is precisely what they do. Catherine waits a beat, and then retorts, with a purr, "You enjoy being in control -- like me."

What's an actress supposed to do with that kind of "Your mother wears army boots" dialogue? The small miracle of "Basic Instinct 2" is that Stone doesn't let the lousy writing throw her. She delivers every line as if it's a clever, cut-crystal zinger, to the point where it takes you a split second or two to realize that whatever she just said was actually really dumb.

Stone, along with some of the other actors here, is always in on the joke of "Basic Instinct 2"; the director and writers seem to be the ones who are always wobbling off the page. Stone looks terrific: Her outfits are expensively tacky (there are lots of supple, cream-colored leathers and skimpy dresses held on with shoestrings), and she wears them with the grandeur of an empress, and with a wink. Stone has somehow earned a reputation as a vain actress (as if the world were filled with modest ones), but what she does here suggests something fairly complex. Stone looks good, and while she may certainly feel the same fears that all aging actresses do, I see no traces of her trying to "play" young. She walks, talks and acts like a woman who knows exactly what her age is and isn't pretending otherwise: She gives the impression of someone who's growing into her beauty instead of growing out of it. Stone gave one of my favorite supporting performances last year, as Bill Murray's sexy ex in Jim Jarmusch's otherwise wobbly "Broken Flowers." It was a performance completely lacking in vanity, and it was deeply moving precisely because it felt so casual, so tossed off. Stone gives a very different performance in "Basic Instinct 2," but she makes the most of its nearly meatless bones, strutting away from it with her dignity intact. She's still walking tall.