Bush claims the right to spy on everything -- including attorney-client conversations. When will Americans have the decency to be shocked? 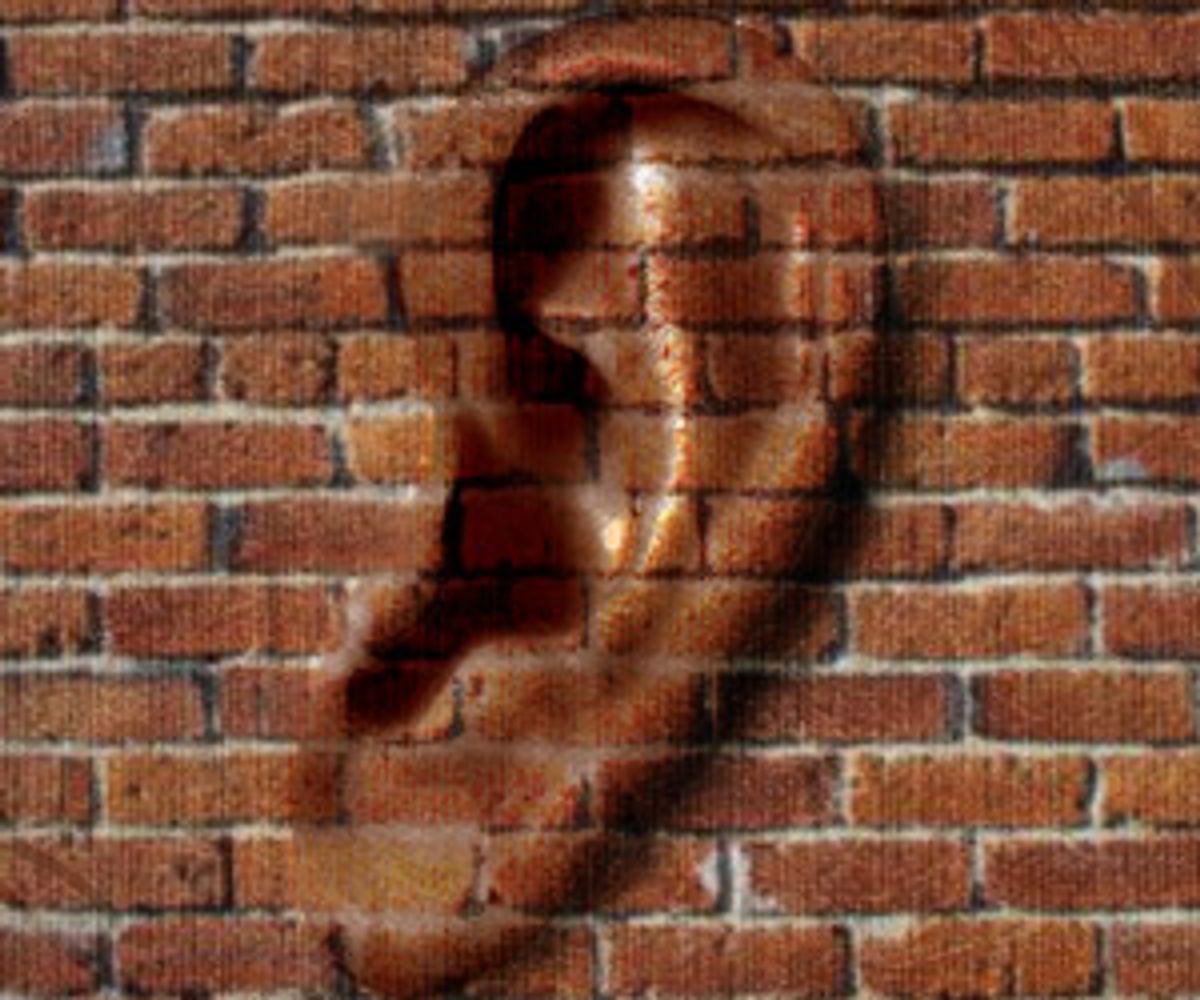 It's hard to remember how shocked Americans used to be when their presidents broke the law.

In a 55-page letter sent last week to the Senate Judiciary Committee, the office of U.S. Attorney General Alberto Gonzales brazenly asserted that President Bush had every right to secretly order the National Security Agency to engage in warrantless eavesdropping for what it called the "Terrorist Surveillance Program." On the last page, after he essentially refused to answer most of Congress' questions about the illegal program, which had been revealed in December ("It would be inappropriate to discuss in this setting the existence or nonexistence of specific intelligence activities"), Gonzales let slip a bombshell. "Although the Program does not specifically target the communications of attorneys or physicians," his office wrote, "calls from such sources would not be categorically excluded from interception."

Sen. Russ Feingold has called for a censure of the president for breaking the law, and civil rights groups, including the Center for Constitutional Rights where I work, have called for impeachment.

Yet President Bush seems to be betting -- as he has, successfully, before -- that the public will overlook his crimes and allow him to continue destroying, as Feingold put it, both "the separation of powers and the rule of law."

Indeed, Friday's Senate Judiciary Committee hearings on Feingold's censure proposal under chairman Arlen Specter, who has characterized the proposal as baseless, are expected to be brief.

Thirty years ago, President Nixon's warrantless wiretapping scandalized the nation and became one of the articles of impeachment against him. And though Nixon invoked "national security," Congress and the Supreme Court insisted that the law had to govern all intelligence and counterintelligence gathering by the government, even when it was undertaken to protect against terrorism.

After Nixon's disgrace, new laws were written to enable the government to continue the surveillance of both U.S. citizens and foreigners on intelligence and national security grounds. In 1978, the Foreign Intelligence Surveillance Act (FSIA) was established, as the "exclusive means by which electronic surveillance" could be conducted; a secret court was empowered to authorize phone taps and, later, e-mail and physical searches. The FISA court was set up to oversee highly sensitive U.S. counterintelligence objectives, and government agencies could get approval to spy if they showed the court their activities were intended to counter espionage, sabotage, assassinations, and international terrorist activities. FISA, which provides criminal penalties for unauthorized wiretapping, has been a virtual rubber stamp for government requests: In the more than 18,000 known cases, there have been only five refusals to authorize surveillance.

And yet, beginning in 2001, the Bush administration sidestepped even the FISA court in order to conduct its own off-the-radar, entirely uncontrolled spying, unaccountable to Congress. For more than four years it engaged in widespread electronic surveillance of Americans and foreigners without warrants from any court, including FISA magistrates. In CCR v. Bush, a case I helped file this January on behalf of the Center for Constitutional Rights and its lawyers, we argue that since the president may only conduct electronic surveillance pursuant to FISA, which criminalizes surveillance outside its terms, President Bush, acting outside those "exclusive means," is committing a crime. On Tuesday, five former FISA judges, including one who apparently resigned in protest over Bush's secret eavesdropping, testified to Congress; several expressed doubt about the constitutionality of a president ordering wiretapping on Americans without a court order.

This is, of course, not the first time that Bush has simply ignored inconvenient provisions of the law and acted unilaterally: This administration has pushed the boundaries of executive power in ways that make Richard Nixon's White House look like a model for the system of checks and balances. Bush has insisted that he can disregard the McCain Amendment's prohibition barring torture; that Supreme Court rulings on habeas corpus can be stonewalled; and that he can ignore the congressional oversight provisions of the Patriot Act.

And now it turns out that Bush's eavesdropping program is not only in criminal violation of FISA, but an end-run around one of the most basic pillars of our system of law: the constitutional right to counsel and the confidentiality of attorney-client conversations necessary to protect that right.

As an attorney for CCR, which has brought many of the most important legal challenges to the Bush administration since Sept. 11, I thought, when the NSA program was revealed, that we could be among the targets of the spying. We represent hundreds of Guantánamo detainees and high-profile victims of torture and kidnapping; we were winning cases against the government and successfully challenging their illegal actions in court. I had ample reason to believe that our conversations with our clients, witnesses and colleagues would be overheard, and even our families' phone lines would be tapped. Now, with the admission by the government that it has not "excluded" listening in to attorneys' conversations, I feel sure that this once absolute boundary has been crossed.

The attorney-client privilege is more than a legal nicety. It is central to the American idea of justice that all clients be able to speak in confidence with those who represent them. It is fundamental to an honest defense that attorneys have access to their clients without surveillance. In the past, when wiretaps picked up attorneys talking with clients, the statutes required turning off the tap as long as the attorney was on the line. But these basic rules have apparently been cast aside by the president.

We at CCR believe that if the Bush administration had gone to Congress and asked for a broader statute, or even to the FISA court for approval, they would never have been able to get permission for listening to attorneys or doctors. So they simply wiretapped attorneys on the sly, without authorization. By spying on me, my colleagues, and other attorneys who challenge them, the administration can learn our legal strategies, end our relationship of trust with our clients, and in essence make us into agents of the government: We ask questions of clients, and the government, listening in secretly, gets the answers.

We may learn more, as our case against Bush and the NSA proceeds. But we, like other Americans, may never know the full extent of the surveillance launched by this administration. Like the secret prisons and torture centers that shame our nation, and the secret executive orders that overwrite the Constitution, the secret eavesdropping that undercuts our legal system will not end until Americans, once again, have the decency to be shocked.