The wily coyotes of New York

The coyote that led cops on a wild chase through Central Park last week illustrates how this supremely adaptive wild dog can live anywhere -- including in the heart of a big city. 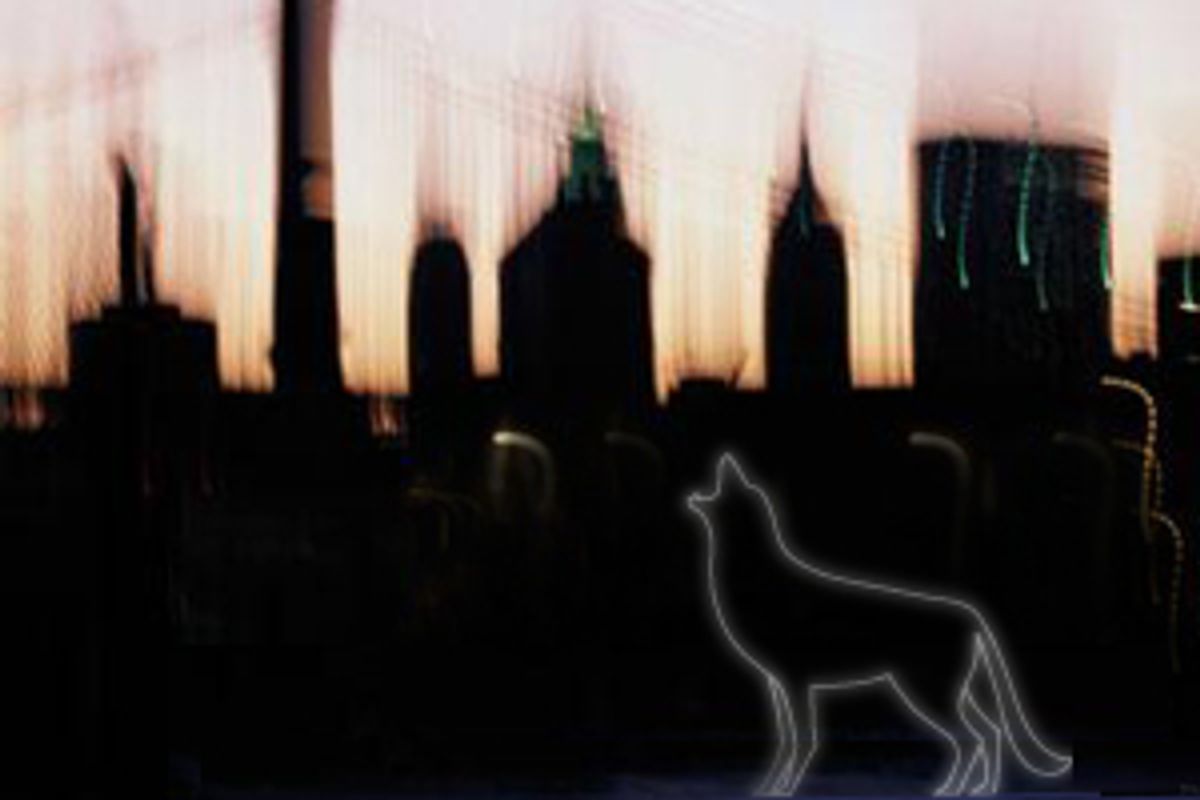 Last night the coyotes called by the covered bridge ... 'We are here,' they say; 'we'll eat your apples, your voles, your cats, the afterbirth of your calves; we're here, we set your dogs to barking, we intend to multiply.' The coyote: evolving, getting better all the time, under heavy pressure. -- Robert Michael Pyle, "Wintergreen: Listening to the Land's Heart"

American Indians referred to the coyote as Trickster: the sneak, the fooler of fools. This explains events in Manhattan last week when a coyote from the city's northern greenswards led cops, photographers, reporters, tourists and helicopters on a two-day chase across Central Park before finally succumbing to a tranquilizer dart.

The canid himself was no anomaly, no confused wanderer. He was a colonist, looking for new terrain, probing the limits of his range. At one point, cops cornered him near a duck pond but he dove in the water, swam to shore and was gone. Nicknamed "Hal" by park workers, he was not the first coyote to visit Manhattan this year. Six weeks earlier, on Super Bowl Sunday, a coyote was found smashed up by the side of a road on the Upper West Side. In January 2004, a coyote was seen bounding among the ice floes on frozen Rockaway Inlet, in Queens, near the piney dunes of Breezy Point, 23 miles south of Central Park.

In the Bronx, New York's greenest borough, coyotes are now established New Yorkers, living in sprawling parks, edging through the trees that line golf courses and baseball diamonds, where the garbage and mice and raccoons are plentiful. It was assumed that last week's coyote had made his way south from the Bronx beachhead, a young male dispersing in the springtime to find new and better land.

The rise of a northeastern coyote is an unprecedented biological event on the American continent. When white men settled the coasts of the Atlantic, there were no coyotes anywhere on the seaboard. The lonesome Canis latrans, the "barking dog," ranged only on the prairies of the high plains and deserts of the West, hemmed in by dominant wolf packs in old growth forests.

But the reach of industrial Homo sapiens transformed the coyote's habitat. By the early 20th century, the forests that fed the wolf had been felled, and the wolf (along with the cougar) was soon decimated, vast swaths of land were subordinated to agriculture, and in this kinder environment, the deer population, freed of top predators, began an inexorable climb to its current saturation point.

The coyote, ingeniously plastic, always adapting, saw opportunity. He pushed east and north and south, assuming the niche of top dog, and today his numbers nationwide are more than twice what they were in 1850. The coyote, says wildlife ecologist Justina Ray, "is the most successful colonizing mammal in recent history."

The rate of expansion was astonishing. According to Ray, who works with the Wildlife Conservation Society, the coyote's march during the 20th century covered thousands of miles, even reaching isolated regions in the Atlantic provinces of Canada, including Nova Scotia and Cape Breton Island, arriving in Newfoundland on sea ice as early as 1987.

Today, coyotes live in or near every major American city. They are reported in Atlanta, Toronto, Portland, Maine, running across a schoolyard in Philadelphia, hiding under a taxi in Chicago, and everywhere in the metro west, including Denver, Phoenix, Los Angeles and Las Vegas. A landmark study from Ohio State University, to be published this spring, tracked coyote behavior in urban Chicago for six years, concluding that the Windy City's coyote population was vastly larger -- at least 2,000 and growing -- and more successful than ever expected. Urban coyotes, the study found, live longer than their country cousins, their range per pack is more compact (much like urban humans), and they hunt more often at night (also like urban humans). The study also found that the creatures likely do not pose a threat to people.

Their acculturation serves as a lesson in the rigors of urban survival. Coyotes have learned to negotiate traffic, listen for voices, watch for lights. They've become ever more nocturnal, remote, secretive. They learn that uncollected garbage, weedy lots and abandoned buildings are their friends. They eat primarily everything: garbage, grass, frogs, chipmunks, shoes, dragonflies, air. They follow human trails. They use our roads, our riverbanks, our bike and hiking paths, our railways and backyards. In Boston, biologists who radio-collared a female coyote during 2004 reported that the dog traveled freely across the towns of Revere, Medford, Somerville and Cambridge, at one point crossing into Boston itself via a railroad line at 3 a.m. before bedding down in an abandoned rail yard north of the Charles River. The coyote, nicknamed Fog, had "little more than shrubs for her to sleep in."

Fog was technically an eastern coyote, as distinguished from the western coyote. Scientists believe there is considerable genetic difference between the two animals, enough that the eastern coyote, now expanding fully in our midst, may represent an entirely new subspecies of canid -- a larger, smarter, more versatile creature. Coyotes, as they foraged east and north over the past 100 years, have grown to twice the maximum weight of their Western ancestors, with the biggest males topping out at over 50 pounds. The slimmer western coyote hunts alone, but the big eastern coyote has learned cooperation, pack-hunting, a wolf behavior. Some biologists argue that the eastern coyote developed through commingling with the Wisconsin timber wolf, a subspecies of the gray wolf that, rather than face extinction, perpetuated at least a portion of its gene pool by joining the migrant coyote flood (thus the coyote's boost in size). Other scientists say that natural selection in the face of bigger game, higher snows, and colder weather catalyzed the coyote's physical flowering.

Whatever it is, big dog or little wolf, the eastern coyote has met and deftly answered the speed of ecological change wrought by man. This is what fascinates: his tenacious adaptation, his vastly accelerated evolution.

Hal's adventure in Central Park last week was a repeat performance of seven years ago when, on April Fool's Day 1999, a similarly tricky coyote named Lucky Pierre led cops, photographers, reporters, tourists and helicopters in a chase across the park before, yes, finally succumbing to a tranquilizer dart. Whence do the coyotes come?

At least 20,000 now live in New York state, and an unknown number in New York City. The dogs first appeared out of Canada, in 1925. Some 70 years later, they arrived in the Bronx. A Bronx woman in 2002 claimed she watched a coyote quietly "saunter" across her backyard. There were sightings that same year of a mother and two pups in Van Cortlandt Park. At least one coyote a year is road-killed along Bronx expressways.

Each spring, coyotes disperse from the pack to find new proving grounds, a space of their own in which to hunt and dominate and attract a mate, with whom they will remain for life. A few days before he made his madcap debut on April Fool's Day, Lucky Pierre, a classic spring disperser, was sighted at Riverside Park near 149th Street. Maybe he crossed the George Washington Bridge 30 blocks north (New Jersey hosts at least 3,000 coyotes). More likely, he traversed the Henry Hudson Bridge at Manhattan Island's northernmost tip, or followed the Metro North line south through Riverdale, using the weedy rail span to cross the Harlem River. Or maybe he swam the river. From there, it would be easy going along the green cliffs of Inwood and the Cloisters, with the gem light of the water of the Hudson below him and rats in their burrows wherever he looked.

Lucky Pierre, so named because he was holed up in a cave across from 5th Avenue's Pierre Hotel, was rechristened Otis and brought to the Queens Zoo, where he resides today. He paces a lot, though he enjoys an expensive diet of strawberries, blueberries, yams, kale and fish. His seven-year-itch brother of last week met with a kinder fate. Hal was handed over to a Long Island couple, Bobby and Rebecca Horvath, who are rehabilitating him before releasing him into the wilderness.

Bobby Horvath is a firefighter, Rebecca a cop. During their off-time, mostly out-of-pocket, with their suburban home as menagerie, they run a teeming nonprofit called Wildlife in Need of Rescue and Rehabilitation. In their backyard, in big cages, they have two barred owls from Connecticut, four red-tailed hawks from New York City, a bald eagle from Alaska, and a 40-pound bobcat, Tasha, rescued from a fur farm. Inside their house, they keep two white-faced capuchin monkeys, a one-legged German shepherd, four fat cats, and a parrot that ululates wildly but doesn't speak. Among other animals, they've treated foxes, raccoons, opossums, seals, sea birds such as cormorants, herons and egrets, cats like Tasha who never made it to the factory shears, and primates such as squirrel monkeys, marmosets, or their own capuchins.

And now, for the first time, they have coyotes. Hal is the second in two months. The first was the coyote nearly road-killed on Super Bowl Sunday. He was a yearling, about 32 pounds, in healthy condition. His eyes were clear, his teeth were pearly, he had few ticks, no internal parasites. "He was spectacular," said Rebecca Horvath. From the accident, however, he suffered a laceration on his back leg that needed suturing, head trauma, and one of his back teeth was cracked and had to be pulled out. He was dewormed, deticked and treated with steroids to reduce the swelling behind his eyes and in his brain. He was 38 pounds when the Horvaths freed him, 25 miles north of the New York City limits, in Westchester, on the large wild acreage of a friend's property.

At the Horvaths' house, Hal was curled in a dog cage that Bobby had placed in the humid dark of the basement to approximate a den. Hal, who was runtish for an eastern coyote, about 30 pounds, just bones and fur, lay in a far corner of the cage, his eyes pooled black but flashing green and gold and orange in our lamps. He shifted a little among the blankets, looking worried. Bobby reached in and touched him and the animal allowed the caress. His fur was coarse as Brillo and shaded tawny with black ticking. "Hey, guy," Bobby softly told the coyote. "They're not after you anymore."

Bobby turned to me. "Can you imagine being chased around by a mob of people for two days and then being shot with drugs?" Bobby shook his head in shame. He said he counseled the Parks Department to set out a cage with a trap door and wait. No, they had to make a spectacle of things. The coyote might be dangerous. Someone might get hurt.

"Look at this guy, he's not a killer. He wants nothing to do with us," Bobby said. "People react with ignorance. Fear. But we're gonna need to learn to live with them. Because they're not going away."

A few days later, Rebecca handed Hal into the custody of the New York State Department of Environmental Conservation, whose biologists were to release him in a state forest 40 miles north of the city. "He wanted to leave. I could see it," Rebecca said. "He watched out the windows of his cage. He seemed excited to see the outdoors." On Friday morning, March 31, a warm spring day in the Northeast, good weather for finding a mate, the Horvaths received word that Hal had died just as he was about to be released. A spokesman for the DEC said the cause was unknown. He simply stopped breathing.