At the world championships of high school debate, teenage Demosthenes spouted off about sex, politics and house parties. 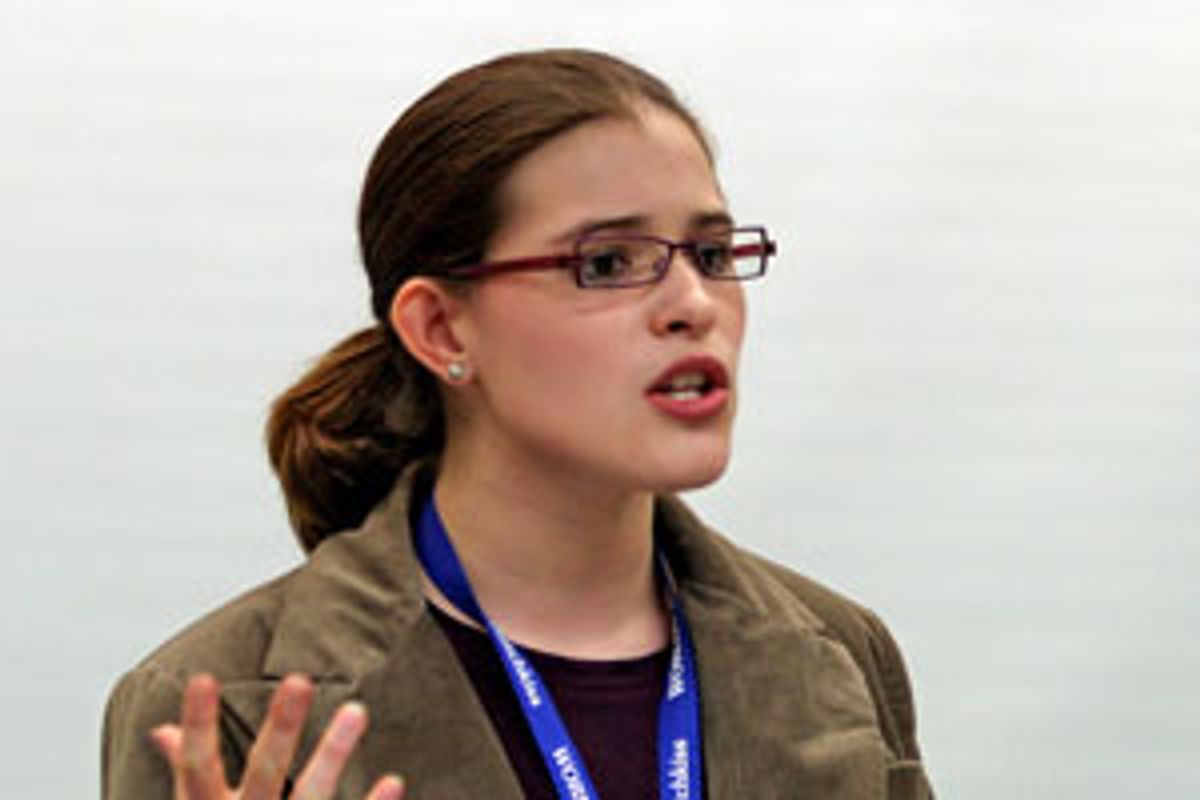 In late March, when the 64 teenagers gathered at the World Individual Debate and Public Speaking Championships in Lakeville, Conn., were asked to debate the topic "Resolved: This house believes in abstinence before marriage," their silver tongues promptly deserted them. Kiran Dhillon of Winnipeg, Canada, argued, "Mr. Speaker, sex is the reason people are raped!" Judah Taub, of Jerusalem, was overheard saying, "The reason why youth have sex today is because of their instincts." Shakir Rahim, of Vancouver, boldly stated that "sexual intercourse is being more widely practiced in society than ever!" (He also added that "not having sex is beneficial because of the negative ramifications that accompany sex at this time.") But my favorite bit of wisdom, again from Taub, was surely, "Let's look at the cycle of life: childhood, school, marriage, children. The question about sex is, where along that line do you slip it in?"

Where do you slip it in, indeed? In the midst of researching a book on oratory in America, I was attending my first WIDPSC as an adult -- I had competed three times as a high schooler, back in the early 1990s -- and although I am now a married man, being there took me right back to my sex-deficient high school days. The WIDPSC is a tournament for private schools, and private school campuses never change; the Hotchkiss School, where this running of the tournament was held, is straight out of "A Separate Peace," with its tennis courts, lacrosse fields, wooded acres, brick buildings, and grizzled teachers walking attractive dogs. The regular Hotchkiss students were on spring break, but the world-traveling debaters who took over the campus were a reasonable facsimile, all tweed and tartan, tweaked with slight international touches -- yarmulkes on the Israeli boys' heads, Pakistani flags pinned to the Pakistanis' lapels, school patches on the English boys' blazers.

Debaters are famously competitive. The year I competed in the college world championships there was an international betting pool -- run by those sporting Australians, of course -- on who would win. So a month ago I called some coaches I knew to ask who was favored to end up in the finals on Sunday. Having gathered this intelligence, I knew which preliminary rounds to watch early in the week and which students to keep an eye on. Among the favorites was Caroline Chen, the Hong Kong-born Hotchkiss debater, who deployed her English accent to devastatingly charming effect. And Steven Kryger, a forceful Canadian whose boyish curls were at odds with his cocksure delivery and who nearly convinced me that the American government should fight heroin use by buying up Afghanistan's poppy product to convert it into morphine for palliative care in the Third World.

But early on, I sensed the potential for upsets, because everyone was so well prepared. These kids took their avocation more seriously than we had in my day; they had read up on their sport, dissected it, theorized about it. "In terms of Canada, western Canada heckles more," explained Andrew Rusk, a soft-spoken junior from British Columbia who originally took up debating because a teacher thought it would improve his poor spelling. (I didn't follow the logic either.) "In England," he continued, "they're a bit more logical, and they're more concise, in part because of their shorter speaking times. They get to the heart of a point and knock it down quicker." Sprawled on a sofa in between rounds, Eyal Goldstein, an Israeli debater, summed up an important bit of debate wisdom and did so in perfect vernacular English: "It's like, in debate, the first person who says 'Stalin,' 'Hitler,' or 'Mussolini' loses." Sebastian Osborn, a patrician-looking American with a surfer's drawl, concurred. "The first thing I was taught in debate was, don't mention the Holocaust," he said. "If you have to talk about genocide, use Rwanda."

Yes, this was an oft-repeated maxim: The famous villains of history are bad debate examples, because they get overused and lend themselves to bathos. But back when I competed, I had no theoretical apparatus; the best I could have done to explain national differences was to say that the English wore those nice double-vented suits. The kids I met this year were a lot more sophisticated. As I sat through the preliminary rounds, I worried that many competitors were a bit too smooth -- well-rehearsed but passionless.

I was delighted, then, when some of the least studied debaters "broke" -- to use sporting parlance -- into Sunday's final rounds. Who would have guessed that Israel would have finalists in impromptu speaking, interpretive reading and persuasive speaking? The Israelis were, after all, the devil-may-care comedians who had nearly persuaded one of the tournament directors that the Jewish faith required them to ritually smoke a nargila -- that's "hookah" in Hebrew -- every Wednesday. And who was this Eric Levitz kid, the worst-dressed competitor, proudly slovenly, this American with a full, fuzzy beard, an upstart from the small Kingswood-Oxford School in West Hartford, Conn.?

Sunday's finals did not, however, get off to a promising start. Arguing to a packed classroom that computers should be banned from classrooms, one Canadian boy -- and he knows who he is, the fop with the Windsor-knot tie and the super-starched cuffs -- actually said, "Fundamentally, Madame Chairwoman, the fundamental purpose of a class is to have a teacher who discusses material, but when computers are present, the teacher's fundamental role shifts." Fundamentally, this annoyed the bejesus out of me, perhaps because it comes uncomfortably close to something I said 15 years ago in a debate about calculators in the classroom.

But then things began to look up. I doubt that Israel's Judah Taub, a blue-eyed boy in a yarmulke who still had the accent of his natal England, ever managed to smoke his nargila at the tournament -- but he gave one hell of a persuasive speech. Musing on the question of how to gauge human happiness, Taub noted that in a famous study, "most of [the] students [polled] preferred to earn less, so long as they earned more than the rest." Therefore, he said, governments should craft policies that take advantage of these quirks in human nature, encouraging satisfaction in non-economic ways; politicians should serve more than just our thirst for capital.

Maybe it's not an original argument -- actually it's first-semester college psychology, or any number of Malcolm Gladwell articles. And I'm quite sure that the speech was rehearsed, of course. But Taub faked off-the-cuff much better than his competitors -- and that counts for something. If anything has changed in the 15 years since I competed, it's that fewer and fewer students are showcasing their improvisational skills. Speaking extemporaneously is dangerous, for one can always falter -- but that's what makes oratory a sport, even an art, not just a game. The elimination of risk is proof of the sad American influence on world debate; it's the triumph of the TelePromTer over the ribald anarchy of Parliament. In sounding a little less rehearsed, Taub struck a blow for the old Churchillian spirit.

But if Churchill's spontaneity lived on in the Connecticut hills, his cruel wit did not. The elegant put-down used to be what all scholastic debaters strove for -- and if the elegant was beyond one's grasp, one could at least go with the mean ("You are no Dan Quayle!"). But at Hotchkiss I witnessed a surfeit of decency. Geoff Buerger, a coach and former collegiate champion famous on the circuit for his bushy red beard, offered his explanation: "The world has changed. Being mean to other countries is now likely to lose points with the judges, not win them." To his credit, Buerger's a mean old bastard, and there was regret in his voice as he described the new niceness. But he was right. Less than five years after 9/11, Israelis are debating against Pakistanis, the South African team is racially integrated, and it must seem prudent to stay clear of insults, which, when done properly, most often play on ethnic antagonisms.

So I was surprised -- and delighted -- when underdog Eric Levitz single-handedly revived the art of the insult for the post-Saddam world. In his final impromptu speech -- a five-minute talk on a topic revealed only two minutes before the speech begins -- Levitz turned "There's no place like home," the most banal of saws, into a masterpiece of self-deprecation. "There's no place like home," he told a crowd assembled in Hotchkiss' music hall. "All these other cultures here are completely inferior to the American one! They're just a joke ... Take that poet, 50 Cent. This man is a lyrical genius. The sentiment 'I love you like a fat kid loves cake' -- you can see that fat kid looking at the cake, and you can see me looking at the girl ... [Or take] America's disaster relief! Most countries would have rushed to the site of the hurricane, but we had the genius to let the flood wash over -- so that we'd have something to watch on TV." Before his five minutes were up, Eric had satirized Americans' voracious musical culture, our bungling in New Orleans and our misadventure in Iraq. and he did it all with a confidence that preserved some sense of superiority; after all, only someone from a dominant culture so easily laughs at himself. Levitz managed to belittle himself even as he was belittling everyone else. It was exactly how to win over a room full of foreign teenagers.

It seems that even in the highly professionalized world of high school debate, whimsy persists. Later, in the humorous speech event, Levitz gave a brilliant address to the fictional United Morticians of America, explaining how to make people happier about funerals and thus likely to spend more money. Morticians need to spruce up their image, he argued, and they can start by putting a brighter face on death. For example, when consoling a teenager who has just been orphaned, one might try saying, "It's kind of like having your parents go away for the weekend -- forever!" Listening from the audience -- and laughing -- I was delighted to hear a joke that captured the best of high school debate: not so much profundity as a profound sense of fun. And that is something, like 50 Cent and forbidden house parties, that kids everywhere understand.