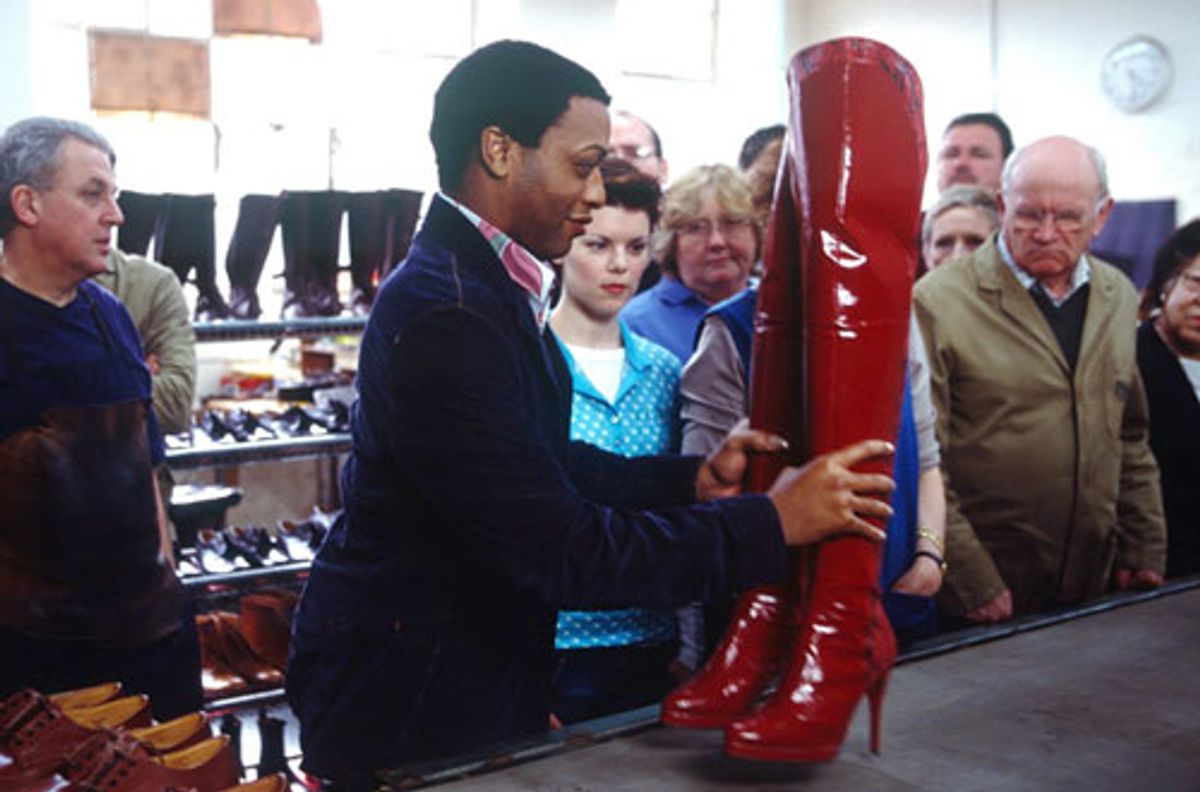 "Kinky Boots," in which a young man resuscitates his family's dying shoe business by expanding his wares to include flashy thigh-high boots for transvestites, is the latest entry in that increasingly bulging category of cheerful, mildly racy U.K.-made comedies that you can take your gran to without embarrassment. You could do worse if you're looking for a gentle pick-me-up: "Kinky Boots" is a sweet-tempered, mildly entertaining picture.

But there's that word mildly again: "Kinky Boots," directed by Julian Jarrold (in his feature debut) and written by Tim Firth and Geoff Deane, isn't badly made, and it has its share of warmhearted wit. But the problem with these movies -- others include "Saving Grace" and "Calendar Girls," the latter of which was also cowritten by Firth -- is that the warm fuzzies they impart dissipate into the ether almost immediately. These movies are clearly intended to be modern versions of the great postwar Ealing comedies, pictures like "The Lavender Hill Mob," "Kind Hearts and Coronets" and, my personal favorite, "Whisky Galore!" about a bunch of thirsty Scottish islanders who find ingenious ways to sneak massive amounts of scotch off a wrecked ship. The Ealing comedies are light entertainment, all right. But there's also something sly and briskly intelligent about them. Their plots -- often involving all sorts of murder, deception and thievery -- never wink at themselves as if to ask, "Aren't we naughty?"

The modern versions of these comedies, including "Kinky Boots," just don't measure up to their forebears. There's something shiny and calculated about them. The conflicts that drive their meek little plots often feel forced. The gags provoke gentle chuckles and then drift away like dandelion seed. You may have had fun, but even just a few hours later, you can't quite remember what you just saw.

Still, pictures like "Kinky Boots" -- which is, incidentally, based on a true story -- do provide a valuable service: They offer a showcase for performers whom we often think of as "serious" actors to do light comedy, to loosen up and have fun (as Helen Mirren did in "Calendar Girls"). Here the spotlight is on Chiwetel Ejiofor as Lola, the strapping London drag queen who provides the inspiration for young Northamptonshire factory owner Charlie (Joel Edgerton) to widen the scope of his business. Ejiofor -- who made his first big splash in Stephen Frears' "Dirty Pretty Things," and who also appeared as a villain of Shakespearean elegance in Joss Whedon's "Serenity" -- is an actor with great physical grace, and a voice so deep and resonant you could get lost in its plush, rolling landscape.

Lola was born, with the name of Simon, to a boxer dad who disowned him because of his feminine streak. And when he's in full wig and makeup, his muscular thighs encased in satin and glittery sequins, Ejiofor isn't exactly convincing as a woman -- but that isn't the point. Lola is one of those drag queens who soften their masculine side but don't attempt to fully do away with it, somehow coming up with the best of both worlds: Her masterfully sculpted biceps may be manly hard, but they also echo the curves of a woman.

Ejiofor plays this masculine-feminine dichotomy beautifully. When he performs as Lola, feeling fully at home onstage in a London club, he pulls out all the stops: His repertoire includes ultra-theatrical honkers like "I Want to Be Evil," and he slinks and croons his way through them with slow-burning ardor. But when Lola relocates to Northampton, to help guide the somewhat hapless Charlie toward perfection in transvestite-shoe design, he is, naturally, viewed suspiciously by most of the locals. In order to draw less attention to himself, he wears men's clothes (including a "manly, yes, but I like it too" Irish knit turtleneck). We see his hair in its close-cropped, natural state, and he wears just the barest sheen of lip gloss.

What's wonderful about the performance is that Ejiofor radiates masculinity as a woman and femininity as a man: In drag, he has a wild, swaggering confidence that feels masculine. And in men's street clothes, his sweetness and vulnerability drift to the surface -- there's something unscrubbed and innocent about him. Although the movie has its share of bawdy jokes and salacious wisecracks, it never really addresses the subject of what Lola might desire in a partner. But there is one lovely scene in which Lola slow-dances with the elfin Lauren (Sarah-Jane Potts), one of the shoe factory employees, who's falling in love with Charlie but hasn't quite admitted it.

Lola, dressed as a man, folds the mite in his sturdy arms; the two drift along to the music, James Brown's "It's a Man's, Man's, Man's World." They're just friends, and that's all they're ever meant to be: As they dance, they look up to the window above the factory floor, from which Charlie, at a physical and emotional remove from his workers and friends, looks on. Lola has noticed, before Charlie and Lauren have, that there are sparks flying between the two of them, and he uses this moment of intimacy with Lauren to nudge her and Charlie closer together.