In this slick and unsettling comedy, a dimwit U.S. president tries to boost his ratings by becoming a judge on a cheesy talent show -- complete with hidden earphone. 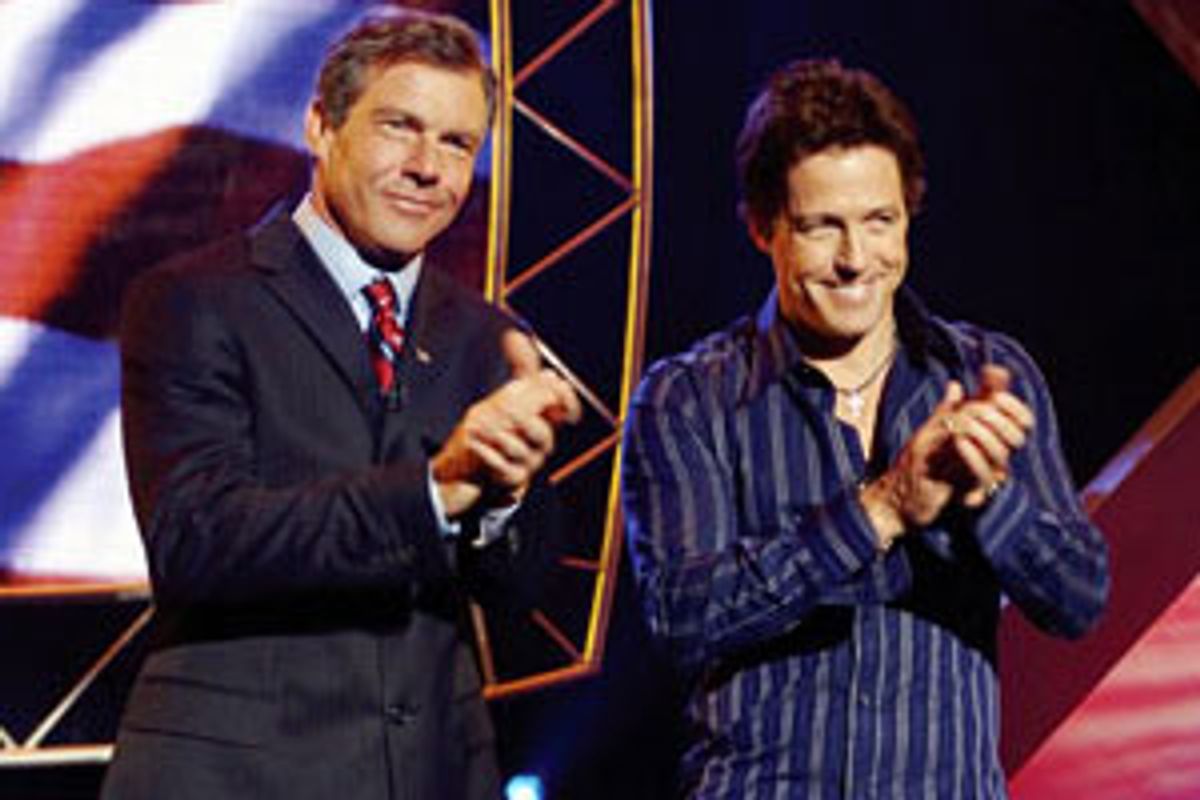 In Paul Weitz's satirical fantasy "American Dreamz," the president of the United States -- a figure obviously modeled on George W. Bush, although, as played by the eminently likable Dennis Quaid, he's far more benign -- suddenly starts exhibiting bizarre and uncharacteristic behavior. "Scare up my reading glasses," he tells the aide who has just brought him breakfast in bed. "I'm going to read the newspaper!"

At first that seemed to me like a glancingly funny but not particularly pointed joke. But the further I got into "American Dreamz," the more clearly I saw the outrage, and the deep frustration, embedded in the gag -- and in the movie as a whole. Twenty years ago, or even 10, who would have thought we'd have a president who not only doesn't read the newspaper but is openly indifferent to the act of reading, period? When Quaid's President Staton catches his Dick Cheney-ish second in command, Sutter (Willem Dafoe, with a comically phony chrome dome), nosing around his stacks of newspapers, he says, "Be careful with that pile -- that's the Canadian press!" Sutter responds with a "Who gives a rat's ass?" shrug, which stirs Staton's indignation: "They're our neighbors!" he bristles, his earnest dismay so far from any currently believable reality that it almost hurts to laugh at it.

"American Dreamz," a sendup of the showbiz of politics and the politics of showbiz, isn't a subversive comedy -- in fact, it's so unapologetically upfront that I suspect some moviegoers will accuse it of lacking teeth. It's also an outright Hollywood product, released by a big studio (Universal) and made by a director who's not sheepishly pretending to be an indie guy.

But the very glossiness of "American Dreamz" sets it favorably apart from recent satirical exercises like "Thank You for Smoking," coy, knowing pictures that congratulate us for being hip to their meticulously calibrated ironies. "American Dreamz" is a different beast altogether, a Tourette-ish little scamp of a movie that blurts out the scary, simple truths we hold deep in our hearts but can't quite articulate. One character explains matter-of-factly what agents do: "They act greedy and mean for you so you can seem like a nice person." A group of Arab terrorists end up chilling out in an Orange County Jacuzzi and, in between hammering out the details of their plot to murder the president, nod enthusiastically when their charming, unwitting host (who happens to be the luscious Shohreh Aghdashloo) offers them some fresh grapefruit sorbet. If you're looking for a movie to make you feel guilty about capitalism and our consumerist culture, you'll have to drive your SUV elsewhere.

That's not to say "American Dreamz" lets us off the hook easily, or at all, despite the movie's unrepentantly fanciful setup. Hugh Grant plays Martin Tweed, the sleazy, smart-aleck British host of a hugely popular talent-contest show called "American Dreamz." (By now you've probably guessed that most of the principals in "American Dreamz" are modeled on real-life figures, many of whom we love to hate.) Tweed would be the first guy to admit he's a prick; he's part of that new breed of prick who's deeply in love with his willingness to admit he's a prick. In the movie's first scene, when his girlfriend tearfully announces she's breaking up with him, he rolls his eyes in exasperation and tells her he's glad to finally be rid of her: "You make me feel like a better person. And I'm not a better person -- I'm me."

Tweed cares only about himself, and his show's ratings. He sends out two of his flunkies (they're played by John Cho, of "Harold and Kumar Go to White Castle," and the sharp, saucy Judy Greer) to find fresh contestants. First, he directs them to bring him "freaks," and they comply by returning with Mandy Moore's Sally Kendoo, an Ohio prom queen with a sunny smile and a ruthless heart. Later, he decides he wants an Arab and a Jew: His dutiful servants dig up Sholem (Adam Busch), who addresses his competitors from the steps of his synagogue: "You hear that? I'm coming for you, bitches!" And by lucky coincidence, they quickly find a corresponding Arab, too. Omer (Sam Golzari) is a hapless would-be terrorist who'd much rather be a pop star, even though he's not particularly cut out for that, either. Still, what he lacks in talent he makes up for with moxie: His signature tagline, delivered with a flourish and a wink at the audience, is "You've been Omer-ized!"

V.P. Sutter, anxious to get his boss away from those newspapers and back into the public eye, arranges for President Staton to appear as a guest judge on "American Dreamz," a way, he tells the president, of proving to his constituency that he still has "the common touch." It'll be easy, Sutter tells him, flashing a smile full of treacherously pointy teeth; the president will be fitted with a miniature earphone, through which Sutter will tell him exactly what to say.

Of course, the idea that a real-life U.S. president would ever appear as a judge on a talent show is completely ridiculous. (On the other hand, Ronald Reagan was allegedly slated to do one of those "I'm going to Disney World!" ads on the morning of his last day in office. His aides talked him out of it.) But the earphone thing? That's pretty easy to buy, and Weitz (who also wrote the script) presents it that way.

"American Dreamz" is an ensemble comedy in which terrorists are secretly affable, recognizably human characters (they're not above shedding a tear during an earnest rendition of "My Way"), and Midwestern sweethearts are ambitious monsters with unstoppable plans for world domination. The actors are so game that you find yourself believing wholly in this upside-down world: Quaid has the perfect "the lights are on, but nobody's home" demeanor; when Staton listens to his creepy veep, or to his wife (played by Marcia Gay Harden), he screws his face into an expression of intense concentration -- it's as if their words have to drill through wood to reach his brain. And Moore vests Sally Kendoo with such caustic determination that even as we laugh at her, we cringe a little bit. She'll screw her mouth into a sultry pout one minute, only to swipe at her comically sweet, fragile boyfriend (Chris Klein) or bark at her devoted mom (the always-wonderful Jennifer Coolidge) the next. When Tweed seduces her, having recognized she's just the girl for him, she fixes him with her dewy-flat gaze and says sweetly, "I'm not physically attracted to other people. But if you want me, I'm yours."

The jokes in "American Dreamz" whiz by with speed and grace, and Weitz maintains control of the material every minute. Sometimes when it seems he's going for an easy target (people's relentless desire for fame and recognition, for instance), he's really hitting a more complicated one: We may laugh at the lengths some people will go to to get their faces on television, but then, how do we excuse our own fascination with the sadistic quality of reality TV?

Weitz isn't out to scold us, or to punish us for the throwaway joys of television. But as funny as "American Dreamz" is, there's a bedrock of melancholy beneath it all. Weitz clearly loves pop culture -- you don't make movies like "American Pie" (which he directed with his brother, Chris Weitz) or "About a Boy" if you don't have a feeling for the exhilaration and pleasure pop culture is capable of giving us. A colleague of mine expressed some doubts about "American Dreamz," noting that Weitz seemed to be suggesting that our current president is basically just a decent guy who'd be an OK president if only he'd pick up a newspaper. I don't think there's any evidence Weitz feels that kindly toward George W.; it strikes me that he simply can't help having sympathy for the character he created, Staton.

But I do think Weitz may be more optimistic politically than he is culturally. The ending of "American Dreamz" is funny enough, but it also has a chilling bite. In the world Weitz has drawn for us, shows like "American Dreamz" climb higher and higher in the ratings, even as they give us less and less of anything real to care about. Meanwhile, as those of us who follow pop culture to any degree know, good TV shows get canceled; wonderful movies fail to find their audience; terrific books end up on the remainder table. "American Dreamz" is a sideways lament for the way crap tends to rise to the top. But there's always the hope that our next president will know how to read.