Maggie Cheung gives an astonishingly complex performance as a junkie rock star trying to clean up her act. 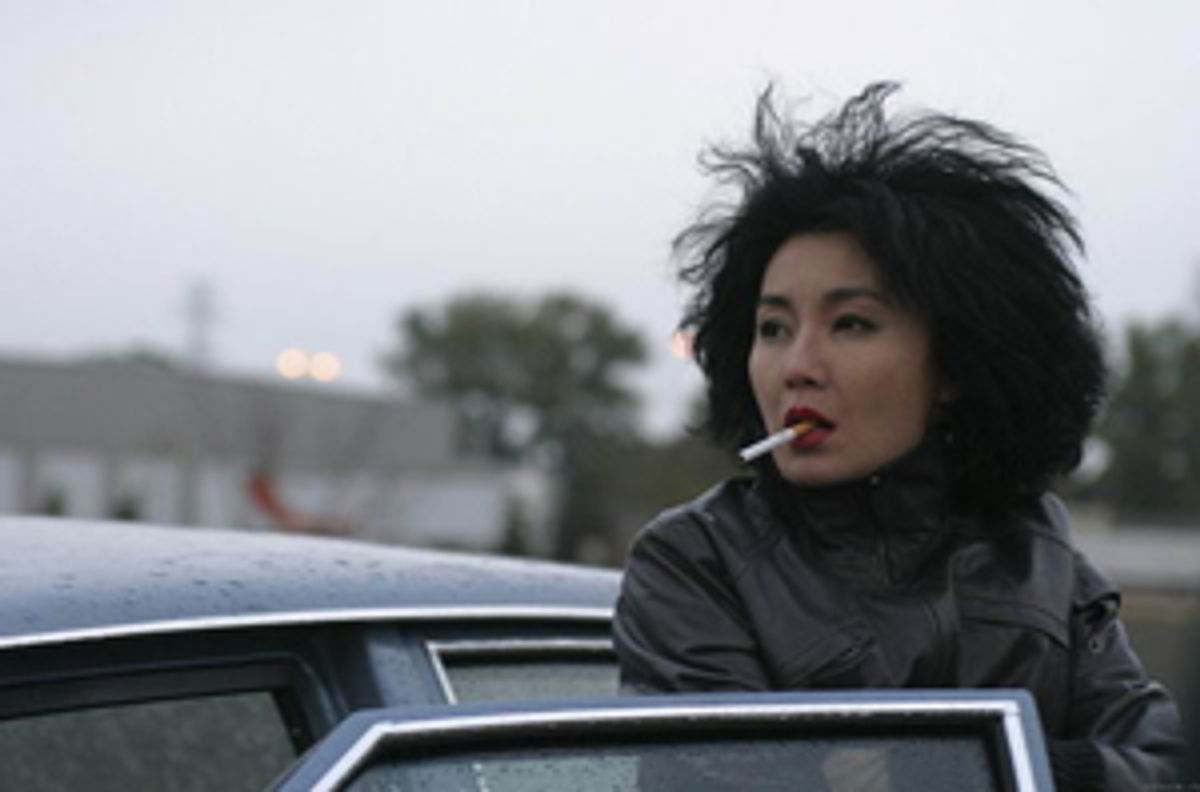 Olivier Assayas seems to love motor scooters, and I suspect it's not just because he's French. In his 1996 "Irma Vep," a love letter to movies' ability to make us their willing emotional captives, his star, Maggie Cheung, and the charming French actress Nathalie Richard zip through the streets of Paris on a motorbike, the nighttime lights around them blurring into a spiral galaxy of color and energy.

In Assayas' latest picture, "Clean," Cheung plays Emily, a failed rock singer and junkie who has cleaned up her act in order to reconnect with her young son. We see Emily and the boy on a scooter, whizzing through Parisian streets, the kid's borrowed helmet comically large for his little body. A motorbike is a very small vehicle, able to carry two people at most -- but then, sometimes two is just the right number. The lilting movement of that bike, as it skims and swerves along, is a visual suggestion of what it might be like to drift through time and space. For Assayas, the scooter is the universal symbol for weightlessness and intimacy, as well as for the sometimes daunting act of simply getting from point A to B.

That sequence appears late in "Clean," and it's the first real assurance we have that Emily is safely on her way to B. "Clean" is a delicate picture about the difficulty of change, although putting it that way makes it sound like just another conventional story about redemption, which it decidedly is not. "Clean" isn't actually about the act of getting clean; Assayas isn't interested in the usual junkie montages, sequences in which addicts sweat out their problems and then either hippety-hop off into a drug-free new life or backslide into the old one. Kicking heroin, essential as it is for Emily to do so, is really the least of her problems, just the first layer of tangled brush she needs to clear away in order to find out what really matters to her. Assayas and Cheung are more interested in getting to the very human core of an essentially unlikable person: As Cheung plays her, Emily is maddeningly self-centered -- it's easy to see why no one can stand her -- and yet we can't help reaching out to her, believing that beneath this impossible person is someone that we might actually be able to like.

The plot of "Clean" is relatively straightforward -- a young mother tries to find a way to get her son back into her life -- but Cheung's astonishing performance has so many layers of complexity that it feels bottomless. As the movie opens, Cheung's Emily and her partner, Lee (James Johnston), a fading 40-ish rock star, are just arriving at an Ontario motel. Emily scores some dope for herself and for Lee, but the two quarrel, and she leaves the room to get high by herself; when she returns in the morning, he has died from an overdose.

Emily, at first implicated in his death, ends up serving six months for possession. But once she's released, she has no idea what to do with her life: She and Lee have a young son, Jay (he's played by a marvelous child actor, James Dennis), who appears to have been something of a footnote in their lives, rather than the focus of it. He's been parked with Lee's parents, Rosemary (Martha Henry) and Albrecht (Nick Nolte), at their home in Vancouver. They love the boy, but Albrecht worries that it will become more difficult for them to care for him as they age, a concern that becomes even more immediate when Rosemary becomes seriously ill.

Immediately after her release from prison, Emily meets Albrecht at a diner, expressing a desire to see Jay. But Albrecht recognizes that she's not stable enough to be trusted with the kid, and he also realizes that Jay has been traumatized enough by the loss of his father. He suggests that it's better for Emily not to see Jay for a while. Not knowing what else to do, she heads to Paris, where she used to live, not so much to turn her life around, but simply because she has no other plan. She also has very few friends: Once she's on her own, she realizes that many of the people in her and Lee's orbit merely tolerated her because they cared so much for Lee. They also hold her responsible for his death, relegating her to the category of "longtime bad influence," as opposed to thinking of her as a person.

Emily is a somewhat unbearable creature, a careless beauty with an inflated view of her own place in the rock 'n' roll universe, as well as, possibly, the universe in general. But we can't take our eyes off her, and we can't help wondering -- and, eventually, caring -- about what will happen to her. That's partly because we see how open she is to tenderness. In that diner scene with Nolte -- who, with his raggedy hair and old-soul eyes, gives a superb performance -- she listens to what he has to say almost as if it were the first time she'd ever listened to anything in her life. His voice is a rumbling, gravelly benediction: He's still grieving for his son, and he doesn't believe Emily was particularly good for him. But he seems to see the traces of the vitality and gravity that must have attracted Lee to her in the first place.

And at the very least, he can't turn away from a person so clearly in pain, and Emily can't help responding to that kind of decency. She's treated far less decently by other old friends, like Jeanne Balibar as Irene, who used to co-host a cable rock show with Emily in the old days, and who was also Emily's sometime lover. Irene is conceited and calcified; she seems to have climbed to the top of the music business by jamming her spike heels into anyone who stood in her way, and her hardness contrasts starkly with Emily's vulnerability.

Emily and Jay don't get to spend any time together until near the end of the story, and even then, they approach each other warily. Emily's self-centeredness has given way to a tentative kind of self-possession, a quality that we can see in her son -- suggesting that she had the capacity for it, too, all along. Cheung and Dennis are lovely together, particularly in a sequence where Jay asks her some pointed (and cruel, in the way children can be cruel) questions about her past. He accuses her of having killed his father, and then confesses that his grandmother gave him that impression. Emily responds matter-of-factly, as if she were speaking to an adult. She tells him that some people need drugs because they can't cope with their suffering, but that the price of that escape is often too high to pay. The scene is marvelously played, and it's refreshing for the way it refuses to treat drug addiction as a scourge, or a failing of character. And in a later scene, we see Emily in a recording studio, singing in a low, whispery voice that suggests the gradual reclamation of her dignity -- which will do her more good than even a hit record would. (The songs Cheung sings were composed by Mazzy Star's David Roback and Luna's Dean Wareham.)

Assayas and Cheung were, until recently, married; "Clean" was made after they'd split, and Assayas wrote the role specifically for her. Cheung has made dozens of Hong Kong films in her relatively short career (she is now in her early 40s), including many with Wong Kar Wai, like the ravishing "In the Mood for Love" and its through-the-looking glass sequel, "2046." (In an interview Cheung gave last year to Kent Jones, at the Walter Reade Theater in New York, Cheung hinted, with a noticeable glimmer of regret, that the long, taxing shooting schedule of "In the Mood for Love" may have hastened the crumbling of her marriage to Assayas.)

Cheung is one of the finest actresses working today, an expressive, lustrous beauty capable of plumbing a boundless range of emotional hues. This is the greatest performance she's given to date. Her Emily is at once willful and mournful -- Cheung's eyes seem to lack their usual sparkle, as if Emily has consciously drawn a figurative veil over them. There's something unspeakably sad about Cheung's performance, and it's not hard to surmise that this collaboration with her ex-husband must have been an intense experience for both of them. Still, this is hardly a depressing performance, or a depressing movie. The look of it, courtesy of cinematographer Eric Gautier, is softly burnished and vibrant all at once -- its simple beauty is a kind of optimism by itself. This is a picture that looks forward, not back. It's possible that the fluid connection between director and actor, formerly husband and wife, is not just their way of saying goodbye to each other, but of cutting the path to a new kind of "hello."