The Galbraith I knew

His biographer recalls how the late economist warned JFK about Vietnam -- and faulted conservative policies for worsening inequality in America. 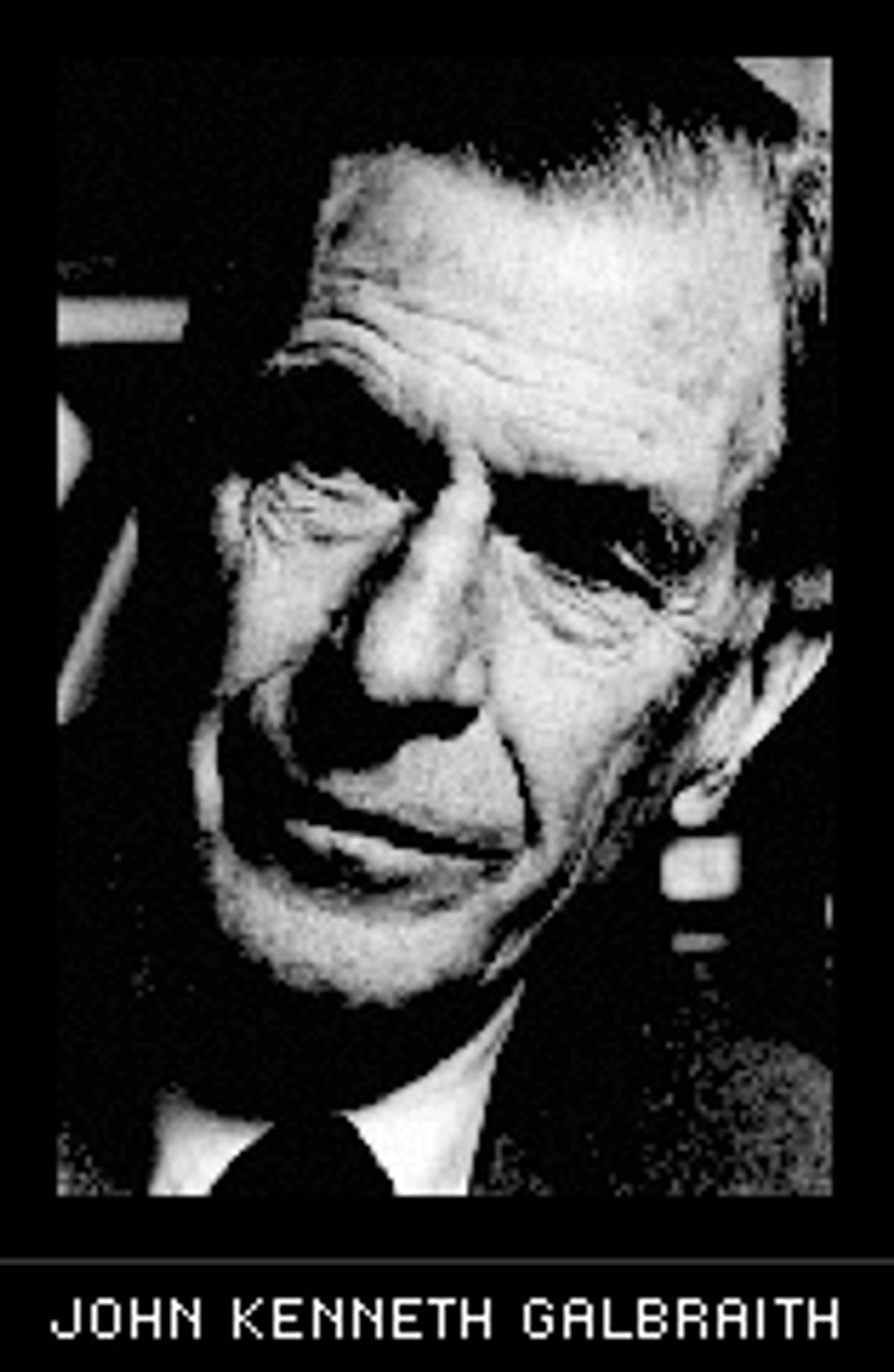 When John Kenneth Galbraith died this past weekend, to many it seemed the end of an era. Born in 1908 when Teddy Roosevelt was president and the first Model T's were just rolling off the assembly line, Galbraith lived during virtually every major event of the 20th century.

Yet too many of the obituaries seemed to portray him as a man of the 20th century -- when, in truth, he's more contemporary and vitally important today than ever before. The problem is that most of the obituaries and comments miscast him.

Galbraith wasn't just an economist; he was a political economist. He wasn't just a Keynesian, either, but a very special sort of Keynesian who carried on as many quarrels with mainstream Keynesian colleagues as he did with free-market conservatives, like his old nemesis Milton Friedman. He wasn't even a liberal -- at least in today's effete brie-and-chablis, it's-all-about-rights use of the word.

The Galbraith I knew -- and wrote about in my biography, "John Kenneth Galbraith: His, Life, His Politics, His Economics" -- was a man driven by a few guiding ideas. He thought power was the governing force in all societies, and the issue that needed to be studied most closely by all the modern social sciences. And he believed that universities had balkanized the search for answers by settling for departmental borders.

He also believed that the real audience for a deeper understanding of power was the public and its leaders, not just colleagues behind ivy walls. He argued with professional colleagues because he thought the trend to mathematicize economics led too easily to obscurantism and irrelevance. Economies weren't governed by "natural laws," like gravity or the speed of light in nature itself, but by social conventions, habits, customs, laws and fears. Human beings weren't thus "rational maximizers of their self-interest" but as often frail as they were strong, and highly susceptible to the influence of leaders of all kinds, simply because as Aristotle had long ago noted, humans were zoon politikon, social beings.

The idea that "markets" were somehow best left ungoverned by governments was on the face of it unimaginable to Galbraith. The term "markets" itself merely described the simple daily exchanges of all human life, back to the Neolithic. We lived specifically in one type of market, in modern capitalist economies, and moreover in a special stage therein. The 19th century had been the age of "production capitalism," when human beings had moved (or been moved) off the land and into cities, from farm work to factory work. The result had been the design, building and operation of what William Blake first called "satanic mills" but that grew into factories and companies of all kinds. Here, Galbraith said, was merely the first stage of capitalism. The second dawned with the 20th century, the era of "consumer capitalism" in its early form, when fully productive capitalism now had to figure out how to sell what it made. Advertising, branding, easy credit and the cultivation of status goods and insecurity that consumers weren't partaking in the latest fashion were its hallmarks.

The Great Depression, and the nearly concurrent rise of communism and fascism -- followed by the Second World War -- nearly put an end to capitalism in any form. In fact it was in no small part thanks to Franklin Roosevelt and John Maynard Keynes -- and their creation of a large public sector whose taxing and spending restored growth and employment, and thereafter stabilized the ups and downs of the business cycles -- that a new world of "macro-managed capitalism" was able to emerge after the war.

But by the mid-1950s -- and this is when Galbraith came to global fame -- this new era of markets faced three daunting challenges.

Still wildly productive, the great corporations once again had to turn to advertising, branding and cheap credit to keep private consumption apace with output. In this, Galbraith saw profound change: Clearly no longer was the consumer on the opposite side of an equation from the producer, with their differences equilibrated by price. Instead, through constant manipulation, the consumer was becoming the final stage of the production process itself. Who, Galbraith in later years argued, in his or her right mind would pay a vast premium to wear clothes labeled with someone else's name -- Ralph Lauren, Tommy Hilfiger et al. -- when the same clothing without such labels surely served the same functional purpose at a fraction of the cost? "Rational maximizer of self-interest" indeed!

The second challenge was that the great corporations were now increasingly controlled and managed in the interests of the managers themselves -- rather than in the interests of stockholders, labor, consumers or anyone else. Related to this, as the giant companies turned to multinational trade and investment, the third challenge was a growing imbalance in international trade. America was beginning to run trade deficits, minuscule by the standards of today, but which frightened politicians and economists alike -- but not Galbraith, who offered up a rich train of policy and political advice on how to manage both problems.

The fourth challenge, which most concerned Galbraith, lay at the boundary between conventional politics and economics -- and it came home in the 1960s in the form of the war in Vietnam.

After World War II, America had adopted "Keynesian" policies, but of a very particular kind: Over half of all federal spending was for the Pentagon. The size of the spending helped the economy through repeated recessions, but the nature of the spending meant that more and more weapons -- Armageddon weapons -- were being created, along with powerful men who were in fact willing to use them.

Galbraith began warning President Kennedy of the dangers Vietnam posed in the summer of 1961, before the first U.S. troops were dispatched there. Kennedy heard him, and amazingly agreed with him, but was in a sense boxed in by the near unanimity of his top advisors that Vietnam was a place where America must "take a stand." Through recently declassified State and Defense Department documents, I was able to learn just how in tune JFK was with Galbraith's warning. The two men understood that this was no mere "foreign misadventure," but could become a quagmire that would not only blow back to the United States but destabilize its economy, delegitimize the Democratic Party and ultimately destroy the confidence of the American people in government itself.

What these newly released documents make clear is that by the spring of 1963 -- after barely avoiding nuclear war in the Cuban missile crisis the previous fall -- Kennedy was ready to act decisively. He ordered the Pentagon to prepare for the removal of the few thousand U.S. troops JFK had reluctantly authorized, with the final withdrawal immediately after the 1964 presidential election. Kennedy assumed he would face -- and defeat -- Sen. Barry Goldwater that fall, and didn't want to be "red-baited" by the hawkish Republican during the campaign. To make sure the Pentagon knew he was serious in his intentions, he ordered that the first troops be brought home in November 1963 -- the month he was assassinated in Dallas.

In the 40 years since then, a new conservative revolution has emerged, committed to tearing down the world that Galbraith and Kennedy hoped to build. But to Galbraith, this revolution has failed America twice over -- and made the fundamental imbalances in American politics and economics worse, not better.

Promising fiscal responsibility and balanced budgets, the right-wing Jacobins have given us neither. Affirming the virtues of smaller government, they made government ever larger -- in fact today, government is a greater share of GDP than it was under Kennedy or Johnson or even Roosevelt (save for the four years of World War II). What they have given us is the most economically unequal country in the advanced world, the greatest public and private debt in our history, the longest working hours and poorest benefits -- and now a war in the Middle East that bore, to Galbraith, all the hallmarks of the Vietnam War he and Kennedy had sought to avoid. (It was after all Galbraith who contributed to Kennedy's famous inaugural address the memorable line, "We must never negotiate out of fear, but we must never fear to negotiate.")

Galbraith is gone now -- but the principles and values he stood for, oftentimes by standing apart from liberals and conservatives alike, seem in this new century more relevant than ever before. Who will take his place is a question I've been asked repeatedly over these past few days.

My answer is, Who first is ready to listen?

Richard Parker is the author of "John Kenneth Galbraith: His Life, His Politics, His Economics." An Oxford-trained economist, he teaches at Harvards John F. Kennedy School of Government.