The docile press corps was offended when Stephen Colbert dared to expose Bush's -- and their own -- feet of clay. But how to respond? Voil 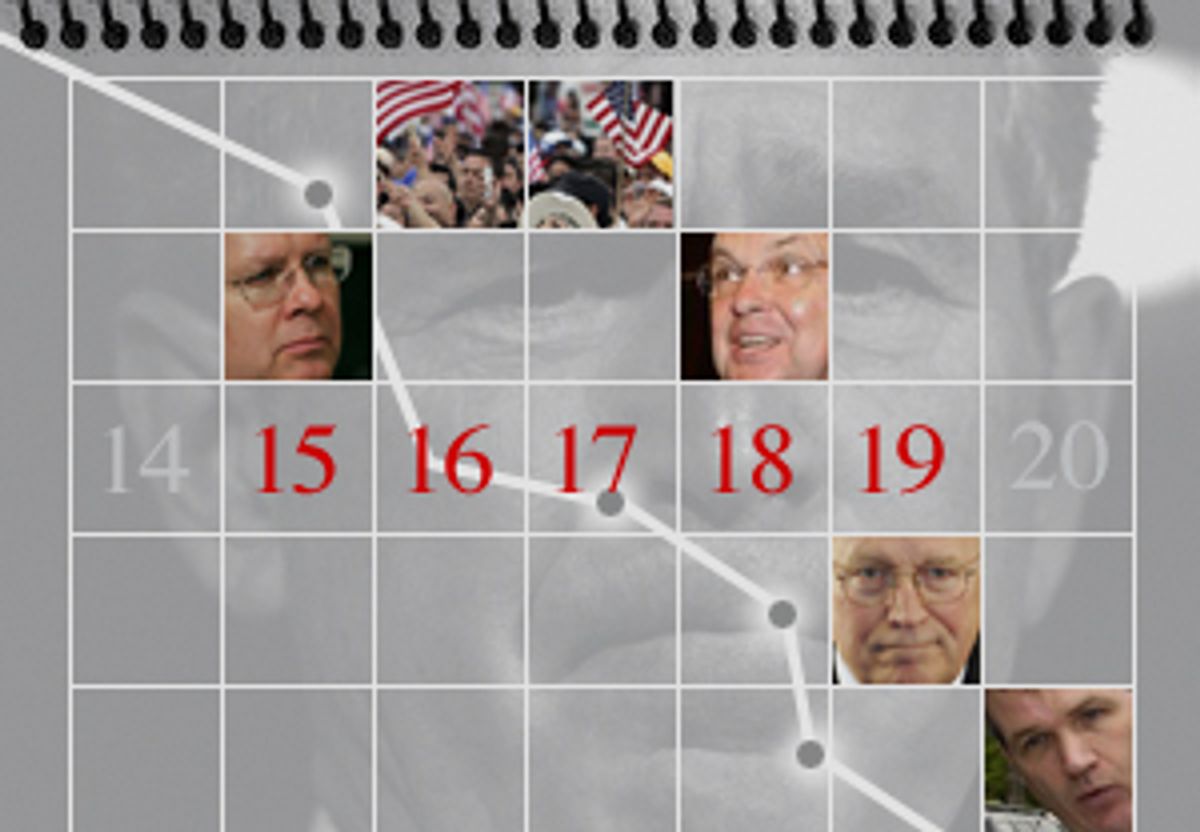 The only thing worse than the mainstream media's ignoring Stephen Colbert's astonishing sendup of the Bush administration and its media courtiers Saturday night is what happened when they started to pay attention to it.

The resounding silence on Sunday and Monday was a little chilling. The video was burning up YouTube, and Salon hit overall traffic heights over the last few days surpassed only by our election coverage and Abu Ghraib blockbusters. But on Monday, Elisabeth Bumiller's New York Times piece on the White House Correspondents' Association dinner kvelled over the naughty Bush twin skit but didn't mention Colbert. Similarly, other papers either ignored the Comedy Central satirist or mentioned him briefly. Lloyd Grove in the New York Daily News pronounced that he had "bombed badly."

Three days later, the MSM is catching on to Grove's tin-eared take on Colbert's performance. Belatedly, it's getting covered, but the dreary consensus is that Colbert just wasn't funny. On Tuesday night, Salon's Michael Scherer, whose tribute to Colbert is everywhere on the blogosphere (thank you, Thank you Stephen Colbert), got invited to chat with Joe Scarborough and Ana Marie Cox, who showed themselves to be pathetic prisoners of the Beltway by passing along the midweek conventional wisdom: The lefty blogosphere can argue all it wants that Colbert was ignored because he was shocking and politically radical, but the truth is, he wasn't funny, guys! And we know funny!

Regular Joe told us he normally races home to watch Colbert. So the problem isn't Joe's conservatism -- Joe's a congenial conservative, a fun-loving conservative, which is why he has Salon folks on all the time (thanks, Joe!). Cox showed why she's the MSM's official blogger by splitting the difference. She pronounced Colbert's performance "fine" but giggled at the left for its paranoia that he'd been ignored for political reasons. Cox and Scarborough mostly just congratulated themselves on being smart enough to get Colbert every night at 11:30, but savvy enough to know he wasn't completely on his game last Saturday. They barely let Scherer speak.

Similarly, the sometimes smart Jacques Steinberg must have drawn the short straw at the New York Times, where there had to be some internal conversation about the paper's utter failure to even mention Colbert on Monday. After all, his sharpest jokes involved the paper's laudable NSA spying scoop, and a funny bit where Colbert offered to bump columnist Frank Rich if Bush would appear on his show Tuesday night -- and not just bump him for the night, but bump him off. How could the Times not notice?

In Wednesday's paper, Steinberg wrote about Colbert's performance with the angle that it's become "one of the most hotly debated topics in the politically charged blogosphere" -- and only quotes Gawker as an example. He also wanders into the land of comedy criticism to explore the assertion that Colbert wasn't funny, but quotes not a comic, but New Republic writer Noam Scheiber. Scheiber (who has contributed to Salon) takes a liberal version of the Scarborough approach. "I'm a big Stephen Colbert fan, a huge Bush detractor, and I think the White House press corps has been out to lunch for much of the last five years," he wrote on the magazine's Web site. "I laughed out loud maybe twice during Colbert's entire 20-odd minute routine. Colbert's problem, blogosphere conspiracy theories notwithstanding, is that he just wasn't very entertaining." Chris Lehman makes the same point in the New York Observer, arguing it was a comic mistake for Colbert to fail to break character.

It's silly to debate whether Colbert was entertaining or not, since what's "funny" is so subjective. In fact, let's even give Colbert's critics that point. Clearly he didn't entertain most of the folks at the dinner Saturday night, so maybe Scheiber's right -- he wasn't "entertaining." The question is why. If Colbert came off as "shrill and airless," in Lehman's words, inside the cozy terrarium of media self-congratulation at the Washington Hilton, that tells us more about the audience than it does about Colbert.

Colbert's deadly performance did more than reveal, with devastating clarity, how Bush's well-oiled myth machine works. It exposed the mainstream press' pathetic collusion with an administration that has treated it -- and the truth -- with contempt from the moment it took office. Intimidated, coddled, fearful of violating propriety, the press corps that for years dutifully repeated Bush talking points was stunned and horrified when someone dared to reveal that the media emperor had no clothes. Colbert refused to play his dutiful, toothless part in the White House correspondents dinner -- an incestuous, backslapping ritual that should be retired. For that, he had to be marginalized. Voilà: "He wasn't funny."

This is a battle that can't really be won -- you either got it Saturday night (or Sunday morning, or whenever your life was made a little brighter by viewing Colbert's performance) or you didn't. Personally, I'm enjoying watching apologists for the status quo wear themselves out explaining why Colbert wasn't funny. It's extending the reach of his performance by days without either side breaking character -- the mighty Colbert or the clueless, self-important media elite he was satirizing. For those who think the media shamed itself by rolling over for this administration, especially in the run-up to the Iraq war, Colbert's skit is the gift that keeps on giving. Thank you, Stephen Colbert!