Is getting Tom Cruise to do more than grunt and squint through a scene the most impossible mission of all? 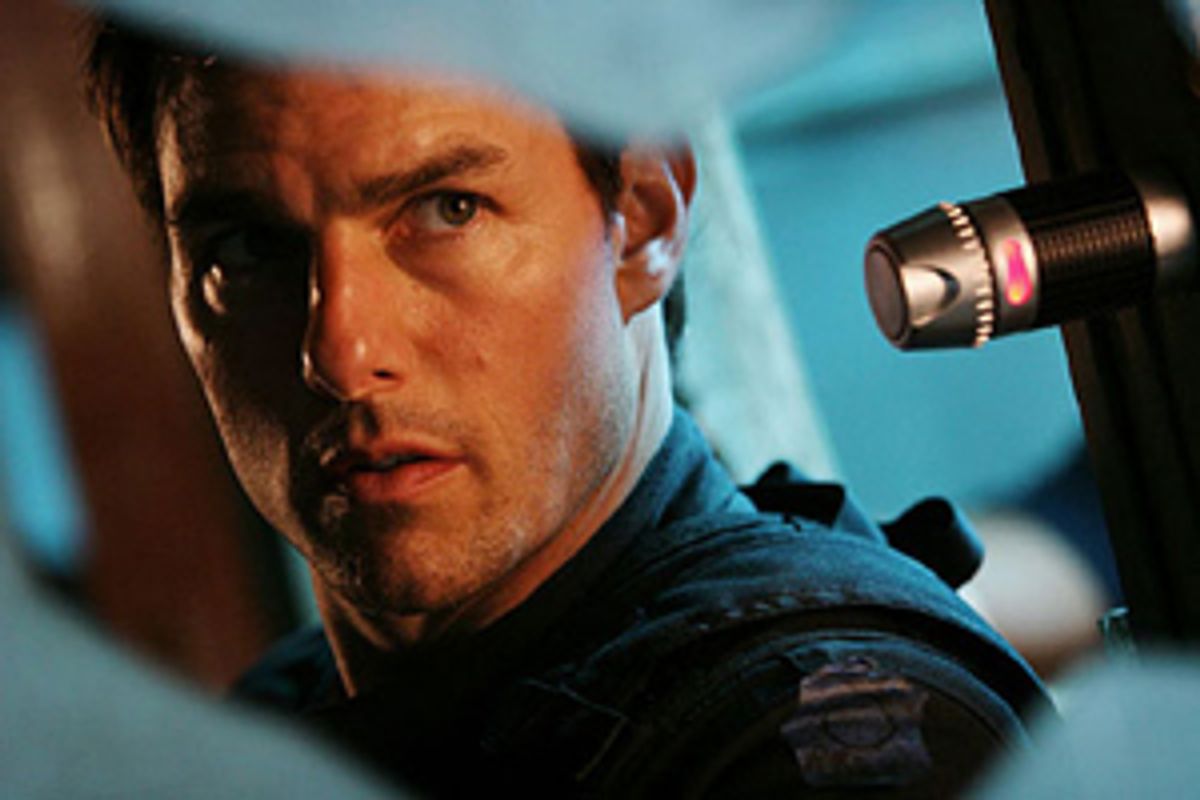 Tom Cruise, reactive but impermeable, has spent his whole career learning how to make faces, mastering the semaphore of sensitivity. But listening to his fellow actors in a scene -- or even just acknowledging their presence -- is still beyond him. In the opening sequence of "Mission: Impossible III," Cruise, as secret agent Ethan Hunt, has been drugged, beaten and handcuffed to a chair. Baddie Philip Seymour Hoffman has kidnapped Ethan's wife, Julia (Michelle Monaghan), and he wants Ethan to watch as he tortures her. As Hoffman coos and flutters around the terrified woman, Cruise squints, blinks and bucks. The scene is all about suffering -- his, not hers -- and later, as he clutches the corpse of a fallen agent to his manly pectorals, the camera lingers on the held-back tears in his eyes. Cruise is so busy squeezing out his hard little nuggets of feeling that he's incapable of letting anything in. Signal sent! Objective achieved! If there are other actors in the scene, Cruise hasn't noticed them. No one's going to sink his battleship.

If all you want from an action hero is muscle, Cruise is a suitable enough specimen -- he has all the definition of a firm bundt cake. But in an action picture directed by J.J. Abrams, shouldn't you want more? Abrams is the creator of two television shows, "Alias" and "Lost," that have found loyal audiences partly because Abrams understands the difference between merely building suspense and using cross play between characters to sustain it. Like Joss Whedon before him -- whose novelistic TV series "Buffy the Vampire Slayer," "Angel" and "Firefly" continue to find new devotees, years after they've gone off the air -- Abrams has a feel for the panoramic narrative possibilities of television. He allows us the luxury of getting to know the characters, even as he keeps the action taut. The emotional intensity of these shows is part of the fun: On "Alias," Jennifer Garner's CIA agent Sydney Bristow may love her enigmatic father, fellow agent Jack Bristow (Victor Garber), but the nature of their work -- and their very nature as people -- means that she can never really trust him. Mistrust bonds them closer than love does. Their relationship is a metaphor for the uneasy tangle that working (and living) in the modern world presents, the way "balancing" work and family often feels less like actual balancing than about trying to control a dense network of stressed-out threads that threaten to slip out of our grasp at any moment.

Of course, the challenge for Abrams -- making his movie directorial debut here -- is to do everything he does best on television, but to pack it into the space of a two-hour movie. That's not a challenge that can be humanly met (not even Whedon, with his beautifully made movie spinoff of "Firefly," "Serenity," could quite pull it off). And yet "Mission: Impossible III" is serviceably entertaining. Abrams doesn't just slap his ideas on the screen. The picture is coherent and well organized, and there are lots of Abrams touches tucked in the corners: Miniature bombs get planted in people's brains (via the nasal cavity, natch). There's a sexy computer geek, played by Simon Pegg, of "Shaun of the Dead." And Abrams gives free rein to his fondness for McGuffins: Here, it's a deadly serum-in-a-canister known only as "the Rabbit's Foot" -- we don't know what it does, but we know it's something pretty darn awful.

"Mission: Impossible III" works quite well as a glossy surface to skate on for two hours. And, like "Serenity," it suggests that directors who have made their mark on TV can have a sense of how to make their stories work on the bigger screen. And yet, watching "Mission: Impossible III," I kept wishing I was at home watching episodes of "Alias" instead. The movie is at least as good as an average episode of the show -- and considering how carelessly made most action thrillers are today, that's admirable. But Abrams hasn't quite figured out how to make his visuals work on the big screen.

Abrams is big on torture -- the sight of Sydney Bristow bound to a chair, with a menacing Asian dentist closing in on her mouth with a pair of pliers, may be one of the quintessential "Alias" images. But Abrams, freed from the constraint of all the things you can't show on television, goes overboard here: We get more than one glimpse of a dead agent's face registering the pain suffered in the last minute of life (one shot would have been just enough). And the action sequences, which include helicopter chases and a bridge getting half destroyed by whizzing missiles, are more frenetic and busy than they are suspenseful. They seem to be half-powered by desperation, as if Abrams is straining to make everything bigger and more exciting for the movie screen, when his real gift is that of focusing on the details that can make a sprawling narrative feel concise and compact.

And one of the great pleasures of "Alias" is nowhere to be found in "Mission: Impossible III." In "Alias," much of the real action takes place not in the field, but back at headquarters. Abrams has a knack for balancing the exotic with the mundane, particularly when it comes to office politics. On "Alias," he deals not just with international espionage but with the everyday stuff of the workplace: Whose desk do you swing by first, after you've just gotten back from a business (or assassination) trip? Who has a crush on whom? And what's up with our weird boss?

There are scenes in which Abrams tries to re-create that workplace bonhomie in "Mission: Impossible III," but they feel rote and lifeless. And they point to the bigger problem with "Mission: Impossible III": When Cruise is your star, how can you even come close to capturing any of the subtle quirkiness of everyday life? Abrams (who wrote the script with two "Alias" writers, Alex Kurtzman and Roberto Orci) has tried to give Ethan Hunt some human dimension (which Brian De Palma succeeded in doing, almost against all odds, in the first "Mission: Impossible"; in "M:I-2," John Woo barely even made the effort to try).

The story opens with Ethan and Julia (whom Monaghan plays with a great deal of charm and spirit, even though the role demands little of her) celebrating their engagement. Ethan is going to be a family man for a change -- he's going to have a personal life in which he's committed to one woman. But one of his superiors, played by the dry-as-snakeskin Billy Crudup, lures him back with an assignment. (The details are cleverly conveyed to him via a disposable camera that, true to the spirit of the TV show that spawned this movie franchise, self-destructs in a puff of smoke after it's served its purpose.) Ethan, with the help of fellow agents played by Ving Rhames, Jonathan Rhys Meyers and Maggie Q (the latter of whom seems to be around just as a hanger for the same types of sexy evening gowns that willowy Sydney Bristow wears), needs to rescue another agent, who's been hot on the trail of pillowy bad guy Owen Davian (Hoffman, who's believably sinister possibly because his features look so mild-mannered and kind). Davian is a black-market dealer who puts dangerous weapons into the hands of evildoers. And he knows that the best way to hurt a guy like Ethan is to go after the person he loves most.

"Mission: Impossible III" is clearly designed to be an action thriller with emotional underpinnings. But you can't get blood from a stone, no matter how hard you squeeze. And so Cruise, a huge box-office star, is the single bright, blinking emblem of the failure of "Mission: Impossible III." There are places where the movie feels molded and manipulated to up Cruise's sagging approval ratings with the public: Julia's girlfriends chatter about what a catch Ethan is; when he and Julia tie the knot in a hasty ceremony, he coyly pulls out the last-minute wedding rings he's procured -- they're plastic, and they have little pandas on them.

Cruise is working hard to play the kind of guy every woman wants, and the kind of guy every guy wants to be: He's manly enough to scale skyscrapers and blast thugs, but he's also a cuddly cutie-pie who knows that panda bears are the secret to getting a gal in the sack every time. And yet he's so focused, he's disengaged. In "Mission: Impossible III," the fate of humanity hangs in the balance, while Cruise groans and grunts through his acting regimen. Nothing is ever at stake with Cruise; he can't get outside of himself enough to make us believe that anything else matters. As Ethan Hunt, he's so busy trying to rock our world that he forgets he's supposed to be saving it.