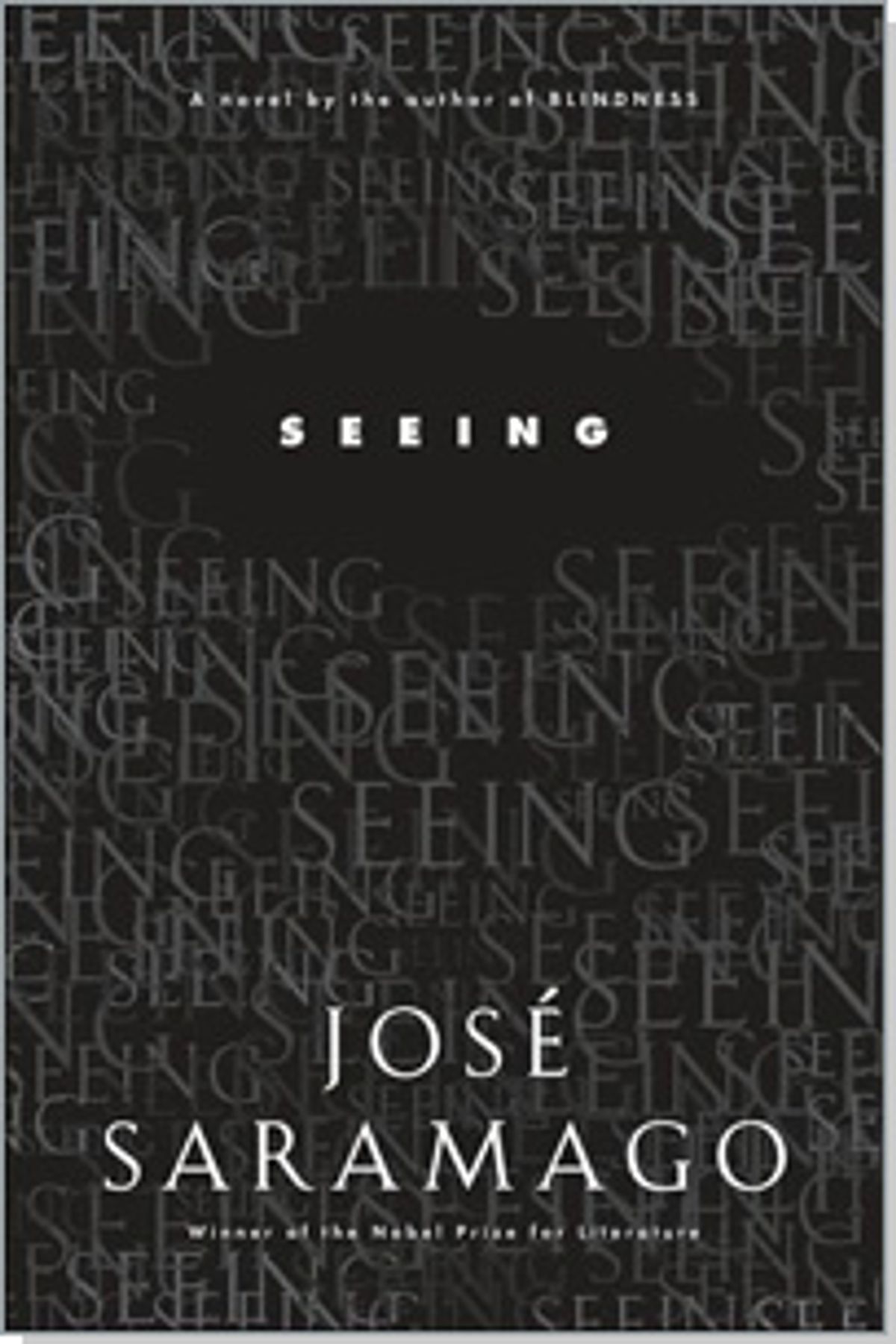 When José Saramago was awarded the Nobel Prize for literature in 1998, he submitted a short biography to the Nobel Foundation that referenced a two-decade dry spell that befell him early in his career. Writing in his famous understated style, the Portuguese author remarked that after publishing his first novel, "The Land of Sin," in 1947, "it had become quite clear to me that I had nothing worthwhile to say."

Six decades later he has proved his younger self wrong -- and this is a very good thing for the rest of us. At 83, Saramago writes with the urgency of an aging man, and in his spare prose he whittles the world down to its bone. His stories, for all their political satirizing and increasingly ambitious plotlines -- he has taken on everything from the church to global disease to the electoral system -- are less concerned with the extraordinary than the mundane. It is the realm of the everyday that Saramago's stories inhabit, and which, he reminds us, we do too. The revolution happens while the merchant is making change, or while husband and wife argue over who will tend to the baby.

But if Saramago's stories deal in the quotidian, they are by no means simple. His novels read like haunting folklore, ghost stories scarier for their proximity to real life than to fantasy. Often, he eschews naming his characters, his settings are not quite here nor there. Indeed, this is the case with Saramago's book "Blindness," the story of a nationwide epidemic of sightlessness. As Jesse Barrett wrote in Salon, "the fable is so unsettling, so limitlessly allegorical" -- the Holocaust, HIV, Darfur come to mind -- "that it feels infinite."

Though its plot is less frightening, "Seeing," Saramago's latest novel, is hardly more hopeful. (The books are related -- "Seeing" returns four years later to the unnamed country of "Blindness" -- but their connection is tenuous, and each book can stand on its own.) "Seeing" begins on a national election day where the Party on the Right (p.o.t.r.), the Party in the Middle (p.i.t.m.) and the Party on the Left (p.o.t.l.) represent "democratic choice." Heavy rains in the nation's capital have prevented all but a trickle of voters from turning out, but when the skies finally clear at precisely 4 in the afternoon, the citizens, as though summoned by the Pied Piper, rush to the polling stations to vote. Yet, when the votes are counted, an alarming 70 percent of the populace has cast blanks. The government demands a reelection, begging the city to act responsibly. But blanks are cast again, this time in even greater number.

Saramago's voice, calm but insistent, sings in this first section, carrying with it equal parts humor and dread. Referring to an election official who worries that his wife will skip voting and shame him by going to the movies instead, Saramago writes: "The ways of warding off fate are many and almost all are useless, and this one, forcing oneself to think the worst in the hope that the best will happen, is one of the most commonplace." What seems to be simple observation about the psychological games we play to allay our fears, here accomplishes so much more. This election official is not merely worrying about a bit of marital tension; he is worrying too about the fate of his marriage and beyond that -- Will she vote? Will anyone vote? -- the fate of his country.

After the election fiasco the government declares a state of siege and evacuates the capital, sealing it off like a crime scene and hoping that the citizens, left to their own devices, will repent by way of making an electoral choice. What follows is a cynical foray into the incompetence of bureaucracy; the mindless bickering of government officials more interested in one-upping each other than trying to understand why this crisis occurred, a bungled government-conspired terrorist attack, and the eventual scapegoating and framing of a single citizen.

All of this makes for a fine farce, but the story itself, despite Saramago's enthusiastic narration, feels strangely empty. Saramago, whose plots often change with a subtle turn of phrase and whose full-bodied characters are tragically human, here falls victim to his own satire. As though overwhelmed by the story's political bent, the dialogue becomes stilted, the message heavy-handed -- democracy's a travesty -- and we wind up caring little for the loose group of characters who read more as stand-ins for parties than as individuals.

Take one of the many conversations between parliament ministers that Saramago has scripted. Here, a conversation between the minister of the interior and a subordinate, who go by the code names "albatross" and "puffin," respectively, hints at Saramago's obsession with idioms and word plays. But even this clever dialogue, which continues for a page and a half, becomes maddeningly rote.

Few writers can get away with this kind of unrelenting prose. Saramago rarely uses paragraph breaks, his punctuation is sporadic at best and there are never quotations to distinguish who is speaking. Still, this racing form has a delightful side effect: It forces readers to slow down, to take note of what we'd otherwise pass over, which, of course, is exactly his point. If only we'd apply this to our own hurried lives, he seems to say.

At its best, "Seeing" playfully shows how easily we accept routine, how rarely we notice the habits that come to define our lives -- be they nightly marital spats or the rituals of participating in a modern democracy. Midway through the book one of the bureaucrats remarks that "It is interesting to observe how meanings of words change without our noticing, how often we use them to mean precisely the opposite of what they used to mean..." Saramago, on the other hand, is a deliberate, attentive writer; he knows exactly what his words mean, and all of them -- despite what he may have thought more than a half-century ago -- are completely worthwhile.