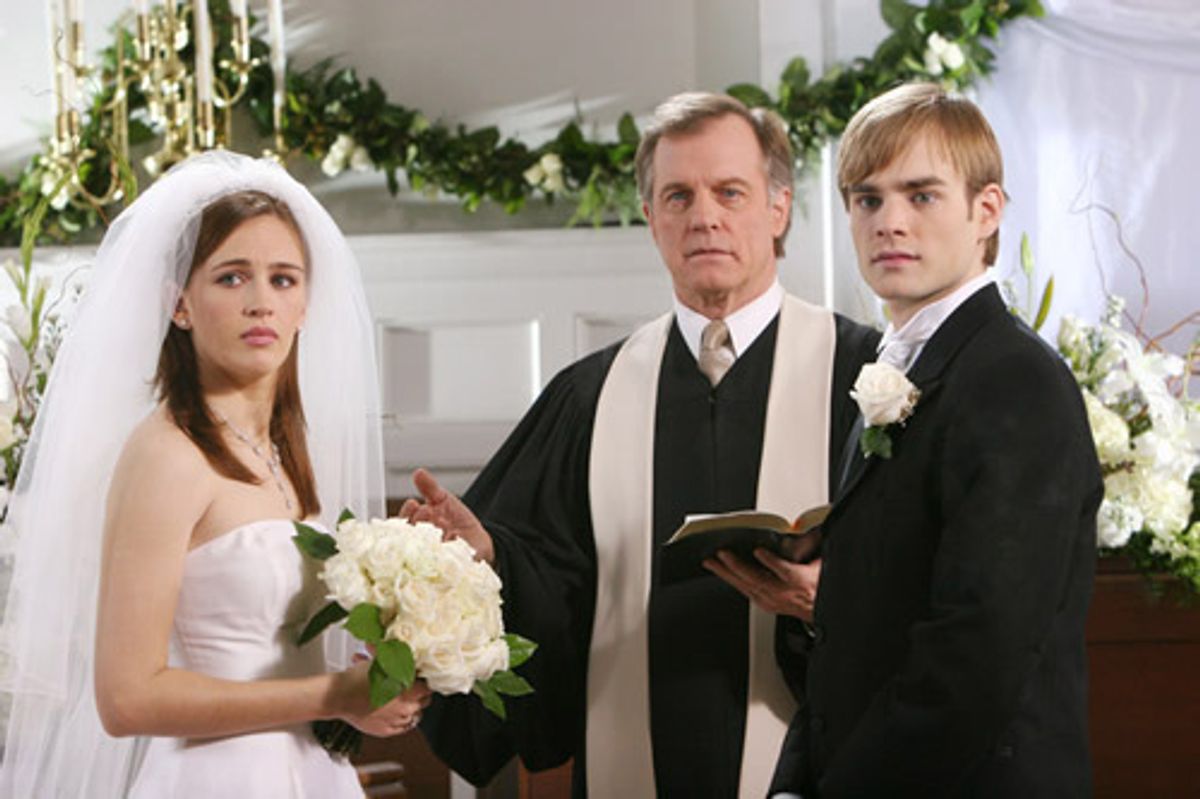 Season finales serve up so many cliffhangers, tragedies and twists that they often end up doing exactly the opposite of what they should; instead of teasing you on to the next season, they leave you exasperated, rolling your eyes, wondering why you ever watched the stupid show in the first place. Series finales, obviously, are a different kind of thing. The final episodes of family dramas -- as with many sitcoms -- are always filled to the brim with heartwarming surprises, flashbacks and (of course!) the ever-pleasing reunion of characters past: Last night's last episode of the WB's "7th Heaven" was no different. The show was remarkable only in that it was so very predictable. Although it did offer one juicy treat -- the brief return of Jessica Biel (as Mary Camden), Esquire's Sexiest Woman Alive, in a ridiculously prim outfit -- "7th Heaven's" finale was indistinguishable from pretty much every other cheesy episode of its 10-season run.

"7th Heaven" was arguably one of the worst long-running shows on television, and one of the most addictive. Like its not-so-distant sibling "Beverly Hills, 90210" -- both were Aaron Spelling's spawn -- the soapy series took bad to a new level. (Though, honestly, "90210" looks like Shakespeare in the Park next to "7th Heaven"; even good actors like Barry Watson, as Matt Camden, came off like dummies on the show, and other cast members couldn't seem to deliver a line in anything but a total monotone.) All along, "7th Heaven" followed the same formula: One of the Camden family members (there are nine: Annie and Reverend Eric Camden and their seven -- get it? -- kids) has a problem and/or secret; some sort of "Three's Company"-esque misunderstanding ensues as a result of that problem and/or secret; a confrontation and/or intervention takes place, usually involving a minisermon by one of the Camden parents; and whoever stands at the center of the drama eventually figures out how to "do the right thing." (That right thing was always the "Christian" thing, of course. Though the show avoided discussing Jesus or faith too explicitly, Protestant guilt was readily employed as a plot device.)

In the finale, the action centers on Simon (David Gallagher) -- a Camden son smack in the middle of the pack, college age -- who is preparing to marry Rose (Sarah Thompson), a young, apparently indecisive woman (should her hair be up, or down? she fusses) who describes her husband-to-be as "the nicest man I've ever met." Both Simon and Rose are doubtful about getting married, so much so that that it's truly curious how they got this far. Neither Rose's opinionated mother nor the usually meddlesome Camdens seem to support the union, but everyone leaves it for the couple to decide. (Well, everyone except for Rose's ex-boyfriend, Umberto, who hatches a plot to foil the wedding by objecting during the service at Reverend Camden's signal.)

Drifting in and out of the episode are the other Camden kids, listed here in descending age order: Matt, Mary, Lucy, (insert Simon here), Ruthie and the totally forgettable twin boys, Sam and David, who, at age 7, still barely seem to know how to talk. The entire finale consists of the various characters debating whether Simon should get hitched (especially now that it is certain his fiancée is not pregnant -- whew!). But there's really never any question what will happen. Although one might have expected Eric (played by Stephen Collins, always with a wink) and Annie (played by Catherine Hicks, whose hairstyles have improved over the years even has her overall looks have taken a turn toward the scary) to shove their little boy down the aisle as early as possible, they also know that Simon has a penchant for making mistakes. (He had premarital sex, after all.) So instead, they withhold their enthusiasm, stay out of it and by their indifference make their position clear.

Indeed, the only one urging Simon to go through with it is Matt, and that's mostly because he's struggled with his own marriage to Sarah (Sarah Danielle Madison); she had left him at one point while they were both suffering through med school. As Simon tries to rally himself into happiness -- "I'll be married for the rest of my life to the woman that I love ... Couldn't be happier," he says, in a tone even flatter than usual -- Matt pressures him with the fervor of the converted, pointing out that Simon has reaffirmed the decision to marry Rose a number of times: with the proposal, the ring, the invitations ... Enter Lucy (Beverley Mitchell) -- sage sister and pastor in training -- to argue that getting divorced down the line is much worse than screwing up today.

Nothing about "7th Heaven" -- during the finale or its long run -- was explicitly insidious or wrongheaded. (Indeed, the show worked hard to preach tolerance. Characters of various ethnicities and religious persuasions were frequently brought in to the show; Mary's husband is Hispanic and Matt's wife is Jewish. There was even a plot revolving around the Lost Boys of Sudan.) And who would argue that someone who doesn't want to get married should do so just because he sent out invitations? But the sappiness -- and sanctimony -- of the characters often made the moral lessons impossible to swallow. For the last few years, the show has been obsessed with premarital sex -- it almost seemed as though anyone who even contemplated doing it would get pregnant.

Now, other shows are guilty of this same crime. "Everwood," which airs after "7th Heaven" in the 9 p.m. EDT Monday slot, made one of its main characters a father before he could vote. And it was practically inevitable that Ryan would become a teenage dad on "The O.C." Yet the low-grade production values of "7th Heaven," the goofy New Age guitar music piping in after the commercial breaks, the overall homely actors and the crappy acting somehow elevated the show (or sank it -- I'm not sure) to a whole different level. The series was beloved by conservatives not just because it focused on a Christian family and counseled against drug use but also because the look of the show was humble. Hemlines were long; makeup avoided; shirts tucked in. The Camdens looked holy.

In the end, we are deprived of the ceremony -- did it happen, we are supposed to wonder? -- and we jump to the reception. When Rose ends the first dance in Umberto's arms instead of Simon's, it's clear what happened. (They never even made it to the church, Simon explains later.) Yet, there's good news! Turns out the three oldest Camden kids are all expecting ... twins! It's a crazy, joyful, statistically impossible fluke! "Yes, yes, yes!" Eric yells. Annie gapes. The Camdens beam about their good fortune and hug -- as usual.