Oh, the suspense! This season ender left us glued to our couches and cursing the commercials. 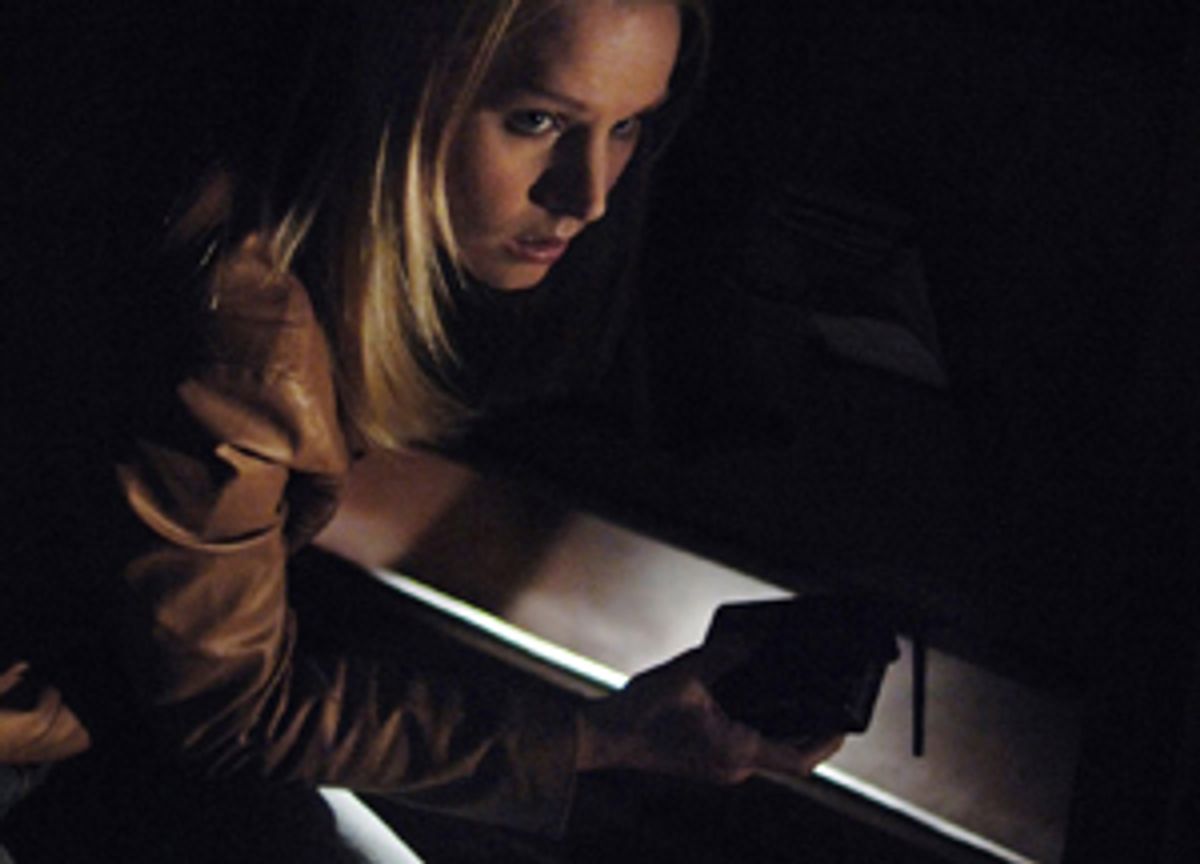 When television is done right, an interminable bank of commercials -- an ad for a teen skin cleanser that zaps oil, followed by a teaser for the 10 o'clock news telling of a wild bear on the loose, followed by a roundup of cheap Mother's Day gifts available at some giant, faceless chain store -- can seem like an affront to humanity, a chunk of uselessness cluttering the hairline eternity between life and death. On the season finale of Rob Thomas' "Veronica Mars," which aired Tuesday night, Beaver Casablancas (Kyle Gallner) -- whom Veronica (Kristen Bell) has fingered as the mastermind behind a bus explosion that killed a number of her fellow students -- has cornered Veronica on the roof of a hotel. It's graduation night; earlier, Veronica's dad, Keith (Enrico Colantoni), has presented her with her graduation gift: The two are going to New York City for a week, an oasis of urban sophistication ("SoHo!" Veronica exclaims; "Shea Stadium!" her dad counters) far away from their small-minded, money-obsessed SoCal town.

But just now, Beaver has told Veronica that the device he's holding in his hand is set to blow up the small plane that her father is traveling in. He gives her less than a minute to call Keith on her cellphone, but she can't summon him. Beaver responds with a nasty shrug. And then, beyond these two rooftop figures, we see a fireball in the sky, a ragged symbol for one of the roughest passages in life -- that of losing a parent, and, in Veronica's case, a colleague who sometimes seems to be the only true friend she's got.

Then the commercials kick in, of course, because that's the nature of television: If the show is good, we're a captive audience, unable to leave the couch even to get a drink of water. But the cheerful hawking of pimple cleansers could be a message from aliens alerting us they're going to take over the Earth, and we'd still be thinking about the look on Kristen Bell's face as she watches that explosion in the sky, a perversion of teenage openness in which a young person, ostensibly with everything to look forward to, is instead looking out on a vast world of grief.

One of the purposes of season finales is to wrap up a million and one loose ends -- or, in the case of "Veronica Mars," a million and two: Former gang leader Weevil (Francis Capra) gets to graduate -- almost. (The A-1 asshole Sheriff Lamb, played by Michael Muhney, arrests him just as he's about to get his diploma, as his grandmother looks on.) We get a brief glimpse of Veronica's ex-boyfriend, Duncan Kane (Teddy Dunn), on a beach in Australia, with his baby daughter -- and we learn that he's just succeeded, via a hit man, in avenging the death of his sister, Lilly, whose murderer, Aaron Echolls (Harry Hamlin), has just been set free. And we learn that Jackie Cook (Tessa Thompson) is, instead of the poor little rich girl she's always pretended to be, really a teenage mom who no longer wants to run away from her responsibilities.

But like any great TV show, "Veronica Mars" is so much more than just the sum of its elaborate (sometimes perhaps too elaborate) plot machinations. The really interesting things on "Veronica Mars" all happen in the margins: It's in the way Logan Echolls (Jason Dohring), Veronica's onetime boyfriend, can be an outright jerk one minute and the next inform her, with lovesickness so genuine that we have no trouble believing it, that their love is "epic." It's in the way whiz-girl Mac (played by the charming Tina Majorino) steps in to help Weevil with his algebra (he needs to pass the final in order to graduate, which is his grandmother's dream), cajoling him into at least a cursory understanding of all those damn numbers and symbols -- even though the two of them have almost nothing in common.

But mostly, it's in the light-as-gossamer, tough-as-nails relationship Veronica has with her father. The two are partners in the family detective agency: Keith pretends to prefer that Veronica focus on her schoolwork, but he also knows she's capable of getting information he can't. And instead of just doting on her, he genuinely admires her -- you can see it in the proud flicker of a smile that creases Colantoni's face when she's come up with some brilliant, previously hidden snippet of information.

Colantoni -- who played the Thermian leader Mathesar in "Galaxy Quest" -- is a marvelous actor, and the rapport between him and Bell is one of the loveliest, most unsentimental parent-child relationships ever seen on television. In an earlier episode, after an instance in which Veronica lied to him, his anger is so palpable it's frightening. But you can see how deep his love for his daughter cuts into him: He wants to keep her safe, but protecting her too much would only undercut her independence, and her intelligence.

In another episode, Veronica learns that she has contracted chlamydia, although she doesn't immediately know how she got it. She says the word aloud, and matter-of-factly, an astonishing thing even by the standards of modern TV: No coy euphemisms here, not even the generically handy term "venereal disease." And there's no "A Very Special Veronica Mars" speech in which she vows to be a good girl from now on. (The show never pretends that these high school kids don't have a sex life.) All kinds of things that we feel we can't, or shouldn't, talk about, "Veronica Mars" blurts out.

Veronica doesn't tell her father she has chlamydia: He learns about it in a crowded courtroom, when it's brought up during Aaron Echolls' murder trial, as a way of discrediting her. The look on Keith's face, the set of his gently wrinkled brow, tell us 12 things at once: He's surprised and concerned; he's angry that any misfortune his daughter has suffered is being used as the tool of scumbags; he maybe wonders why Veronica didn't tell him, and is pained by fact that she didn't tell him -- and yet he can't blame her a bit for not wanting to tell him. This is more than just a "My little girl is growing up" moment. It's a small flash of recognition that he has to allow Veronica, as an adult, her privacy, which means his role as her protector and caretaker has its definite limits.

Veronica is sometimes rankled by her father's protectiveness. But mostly, she understands him so well as a human being -- he's just doing his job, doing what dads do -- that it's not even an issue. In a dewy-edged, painful dream sequence during this finale, Veronica imagines an alternative graduation day: Her parents are still together (in Veronica's real life, her mother, played by Corinne Bohrer, has a serious drinking problem and has left her family behind); Logan Echolls, and not Duncan Kane, is her true-blue boyfriend; and her best friend, Lilly Kane, is still alive. Everyone is happier this way, and at one point during this dream of the way things ought to be, Veronica looks at her father and catches the look of contentment on his face.

The moment represents everything she wants for him -- a recognition of the reality that part of growing up is wanting happiness as much for our parents as we do for ourselves. And Bell, a terrific actress who knows how to turn a tossed-off zinger into the best kind of "I love you," captures that realization perfectly. Her lively, intelligent eyes are always busy reading the people around her. Veronica, as a good detective always does, is always stepping into other people's shoes. But later in this episode, when she sees that ball of fire in the sky and realizes that her father may have been taken away from her forever, there are no shoes to stand in but her own. Long after that endless commercial break, we realize Keith Mars isn't dead. But for a time, we live with Veronica's loss, and we feel it as if it were our own. Even those of us who lost parents long ago, and under far less dramatic circumstances, are likely to have felt a pang. You're never too old to be an orphan.