Conservative critics have bemoaned "The Da Vinci Code" as a subversive attack on moral decency and a shocking challenge to religious tradition. If only. 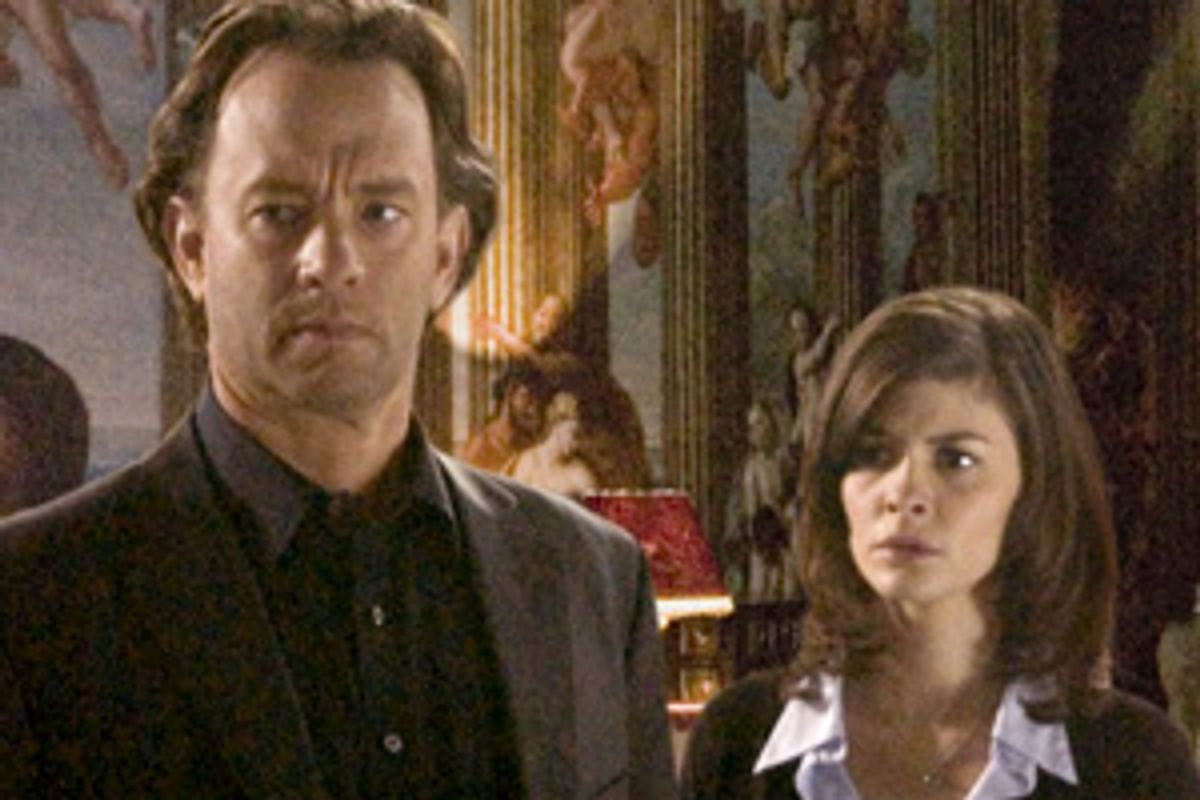 Dan Brown's 2003 conspiracy mind-blower "The Da Vinci Code" is a prime example of clumsy artfulness, a book that boasts perhaps some of the most idiotic sentences ever laid to paper ("Prominent New York editor Jonas Faukman tugged nervously at his goatee") and yet keeps you turning the pages almost in spite of yourself. Killer albino monks? Pagan sex rituals that defy everything the Catholic Church holds dear? Tell me more! Secret societies that revere Mary Magdalene, Renaissance artists who doodle blasphemous in-jokes in the corners of their paintings, tubby cardinals desperate to make sure the general public doesn't find out that women really are the center of the universe: "The Da Vinci Code," a blend of pseudo-facty information and mischievous, provocative invention, is a flying meringue pie headed straight for the church's kisser.

But "The Da Vinci Code" has also captured the popular imagination in a way few other recent novels have. The novel's faux-scholarly folderol is part of the fun (even if Brown doesn't always seem to be in on the joke). And the fact that Catholic and conservative Christian groups have come out so strongly against the book only make its paranoid visions more believable. If the church is so worried that "The Da Vinci Code" will lead the general public to believe that killer Opus Dei monks actually exist, you start to wonder what the organization is really trying to cover up: Do they eat babies? Host Black Mass hootenannies? The sky, and not merely Brown's extremely active imagination, is the limit.

But everyone knows that more people see movies than read books, even books that are as popular as "The Da Vinci Code" has been. And now Ron Howard's movie version of the novel -- which opened the Cannes Film Festival on Wednesday night, and begins nationwide on Friday -- is here to stir up more trouble. Vatican officials have been fuming, publicly, that the movie is filled with slander and errors, even though, of course, there's no way they could have yet seen it; one former nun has advised Christian moviegoers to see "Over the Hedge" this weekend instead. Better to embrace the reality of talking animals than the possibility that Jesus and Mary Magdalene might have borne children together.

With negative publicity like that, who in their right mind wouldn't run to see "The Da Vinci Code," at least out of curiosity? But the unfortunate reality is that the target of these groups' ire and frustration is a somber, staid movie, too long, too self-serious, and too slow-moving to have the kind of dazzling impact they fear. The movie is by no means a disaster: The performances, particularly those of Tom Hanks (as the hero, Harvard symbology expert Robert Langdon) and Ian McKellen (as Langdon's wry friend and rival scholar Sir Leigh Teabing), are sturdy and -- at least in Hanks' case -- understated. Screenwriter Akiva Goldsman did perhaps as well as anyone could have in adapting the book, finding ways to dramatize and compress the explications and digressions that are its lifeblood. And the picture, shot by Salvatore Totino, has a lovely, burnished look -- its palette of soft grays and browns echoes the muted clarity of the Leonardo Da Vinci paintings that play such a crucial role in the plot.

There's nothing assaultive about "The Da Vinci Code"; because it isn't loaded with noisy action, you get the sense that it was at least made for grownups. But its aura of stiff dignity works against it, too. The picture just doesn't have enough zing -- it's so stately that it almost seems to be apologizing in advance for any potential controversy it might cause.

The story goes something like this: Langdon is in Paris, promoting his new book, a study of sacred feminine symbols, when he's summoned to the Louvre to answer questions about a murder that has just taken place there. The body of curator Jacques Saunière has been found lying nude on the parquet floor of one of the galleries. His arms and legs are outstretched, his body contorted in an approximation of Leonardo's Vitruvian Man; his chest has been marked with a pentagram, sketched out in his own blood.

Police captain Bezu Frache (Jean Reno) has reason to believe Langdon is the murderer, even though he and Saunière have never met: They know each other only by reputation. But police cryptologist Sophie Neveu (Audrey Tautou), privy to information that has been kept from Langdon, knows that he's innocent. She shows up at the crime scene and manages to impart a message to him: It'd behoove him to get out of the Louvre, pronto.

It turns out that Sophie is Saunière's granddaughter, although they've been estranged for many years. And she realizes that he spent his last living minutes setting up codes and messages for her, imparting to her the keys to 2,000-year-old secrets that have been closely guarded by an elite group of thinkers known as the Priory of Sion -- a group that counted Leonardo and Sir Isaac Newton among its members, and of which, we learn, Saunière was grand master.

When Sophie and Langdon aren't outrunning the police, they're being stalked by Silas, a crazed albino monk who's part of the conservative Catholic faction Opus Dei. (He's played by Paul Bettany, outfitted in contact lenses that give him the eyes of a malevolent lizard.) They have something Silas and his sleazy cardinal boss (played by Alfred Molina, who gives the movie a needed shot of campy evil) desperately want -- a crucial part of a puzzle that could blow apart everything the church stands for.

And yet, aside from a few semi-feverish car chases, and despite the fact that the characters are required to zip from Paris to London and back to Paris again, there isn't really a whole lot of running in "The Da Vinci Code." Much of the movie consists of Langdon's reading symbols -- squiggles and blips whose specific meanings continue to speak to us down through the centuries -- and explaining them aloud to Sophie, or anyone else who's around and will listen. That means the characters often thrash around with some pretty inane dialogue: "This -- can't be this -- the fleur de lis!" But mon dieu! It surely is.

Howard doesn't move the story along as quickly or as smartly as he should. (It's a sad state of affairs when Hanks' character is actually asked to utter the words "We have to get to the library, fast!") But he does come up with a few nice visual touches. He superimposes a vision of 18th century London onto the modern-day one, showing holographic ghosts of the mourners who showed up for Isaac Newton's funeral: They're translucent, shimmering pedestrians in powdered wigs and heavy dark cloaks, and Sophie and Langdon, who have the benefit of being real and alive, pass right through them. It's a lovely, poetic effect. And although Tautou doesn't have much of a role, she's such a strong visual presence here that she helps anchor the movie: Totino shoots her in a way that makes her beauty feel perfectly natural and unforced, yet disarmingly intense. In some scenes, her skin has the quality of marble, as if the essence of feminine art through the ages had been poured into one living, breathing human being.

But for the most part, "The Da Vinci Code" isn't a picture with a vivid sense of history. In fact, it's guilty of the very thing that makes kids hate history as a subject when it's taught badly: "The Da Vinci Code" makes the past feel like a dull, grainy, faraway thing, instead of something vibrant and alive.

What has the world of culture come to, when religious people are warning you off a picture that only makes you feel as if you're trapped in a schoolroom to begin with? There's a little bit of violence in "The Da Vinci Code," and the picture alludes to sex, even though it doesn't really show us any. But as forbidden movies go, "The Da Vinci Code" is disappointingly tame. I was in Catholic school when "The Exorcist" was released, and one of the nuns warned us that if we went to see it, there was a chance that we could become possessed by the devil ourselves. Naturally, some of my classmates took that as a signal to rush right out and see the thing; Sister Joanne had managed to vest the movie with more power than it could ever have had intrinsically. "The Da Vinci Code" is a big Hollywood movie, made by a big-name director, based on a big, bestselling book that nearly everyone has heard of, but none of those things can guarantee it will be a hit. Its box-office figures may be a barometer of something that no Hollywood executive would ever think to measure: The power of the Holy Spirit as a marketing device.