Jane and Michael Stern talk about 30 years of scouring America for the best chili dogs and fried clams -- and the food they had to throw overboard. 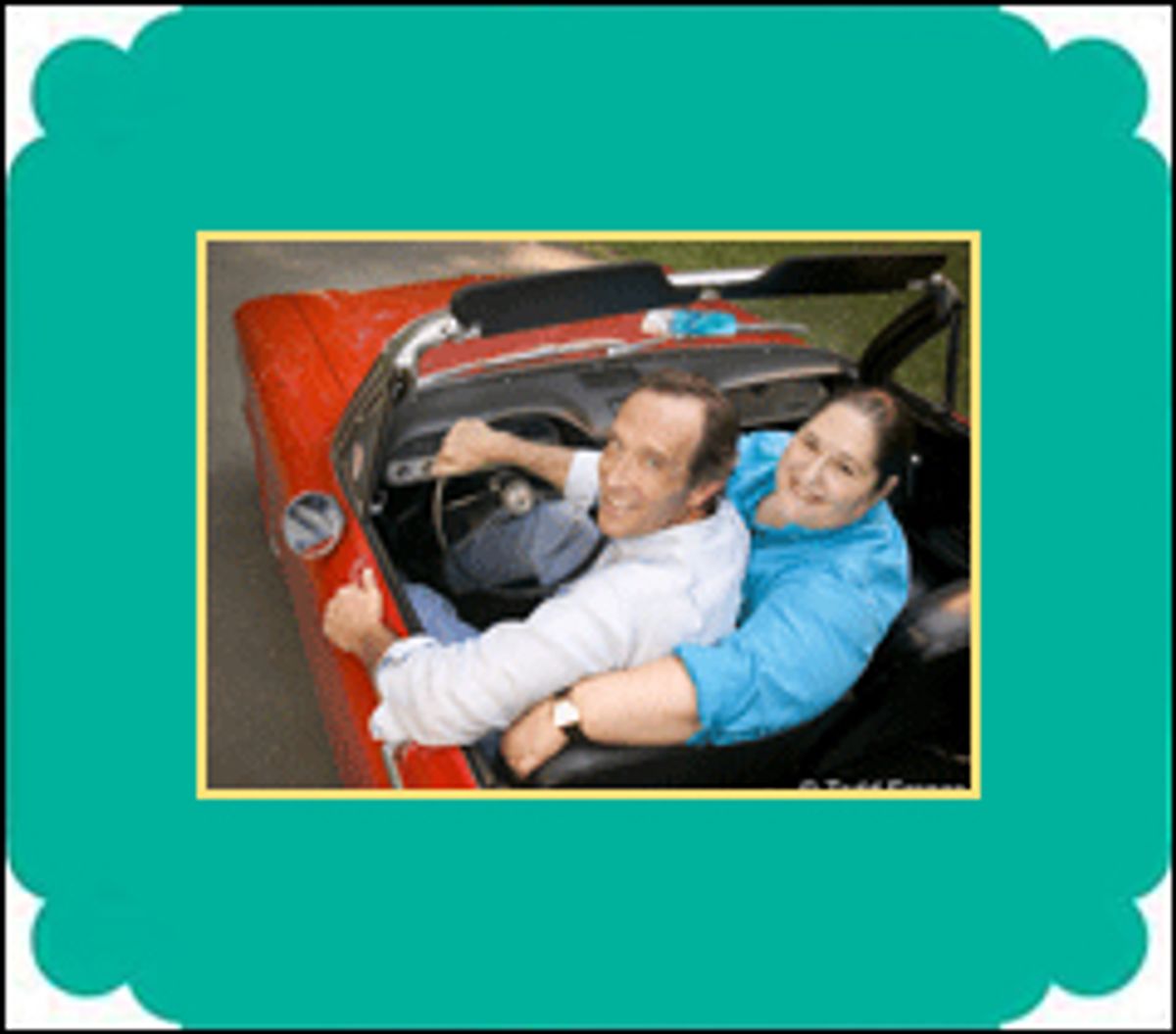 "Should we eat while it's hot?" Michael Stern asks as a perky, ponytailed waitress slides a steaming pizza pan onto our table. We need no prompting, though; sliced into jigsaw pieces, glistening with olive oil, flecked with petite New England clams and perfumed with garlic, the pie is irresistible. Seconds later, another thin-crusted beauty arrives, blanketed in chopped tomato. Hands and mouths go to work and three of us chew in contented silence, clinking our glasses of root beer.

It's a blue-skied day in early May and I've joined Michael, along with his wife, co-author and traveling companion, Jane, for a late-afternoon pit stop at Pepe's Pizzeria in Fairfield, Conn., to sample the legendary slices and to talk about their new book, "Two for the Road: Our Love Affair With American Food." The pizza is divine, but the place carries a personal connection for the couple, too. According to Stern mythology, it was on their first date, over one of Pepe's white clam pizzas, that they first discovered their shared passion for great food, and for one another.

Now, more than 72,000 meals later, Jane and Michael Stern have become American culinary legends. Since that first shared meal three decades ago, the two have emerged as the country's leading authorities on "road food" -- sniffing out the small-town diners and roadside cafes with the country's best flapjacks, fried dough, chili dogs and collard greens. From their home base in West Redding, Conn., together they have traveled over 3 million miles, surviving on their iron stomachs and their sharp sense of humor, and spawned a small cottage industry that includes more than 30 books, a popular Web site, a monthly column in Gourmet magazine and a frequent guest spot on public radio's "The Splendid Table."

Though "eating locally" has lately become a buzzword in four-star restaurants, the Sterns were fans of homespun, regional fare long before farmers markets and slow food were en vogue. "American food, as we think of it, is not pure -- it's not the Alice Waters ideal of sustainable, organic everything. Some of it is absolutely right off the farm, some of it is mixed in with crappy cake mix, some of it is about a guy who stands outside for 12 hours swabbing a side of meat, some of it is about just having a Coke," Jane says. "[Describing road food] always reminds me of a time, back in the '80s, when I took a tour of the homes of some local quilt makers in Oxford, Miss. There were beautiful quilts made of polyester, and with Barbie doll fabric in them -- because cotton was too expensive. Because, of course, quilt-making tradition is to take odds and ends of leftover things you have around the house and reuse them. So I guess, like quilts, the food Michael and I are interested in is a kind of folk art."

Indeed, when the couple first embarked on their edible adventures, both had recently completed graduate degrees in art from Yale University and they brought a documentarian spirit to the task. "When we were doing the first edition of 'Roadfood,'" explains Michael, "we really did worry that the restaurants we were writing about would soon be gone and replaced by franchises. And over the years we have seen many go out of business; there's no denying the onslaught of corporate food has had a bad effect." "But it hasn't been nearly as grim as we expected," adds Jane. "I guess the upside of the fancier food culture that's developed in the past two decades is that now a lot of restaurants that might have gone under have been preserved by a second generation of kids, and run with a pride that wouldn't have been there before."

Though the prospect of driving across the U.S. 100 days a year, earning a living sampling cherry pie and fried clams, is enough to inspire envy in any office drone, the Sterns, both aged 59, are quick to warn that the life of a roadfoodie is not without its trials. Indeed, in their continuing quest to test as many restaurants as humanly possible, the Sterns consume an average of 12 meals a day on the job, a task that means rising at 4 to catch at least one breakfast when coffee shops start humming at 6 a.m. "We can eat just about anyone under the table, so the first few breakfasts of the day [are] no problem at all," they boast in "Two for the Road." The difficult part comes, they explain, when you add to that itinerary four lunches, and an afternoon ice cream. Most nights, the Sterns say, they are so stuffed by their (last of four) dinners that in order to avoid the shaming stares of the wait staff, Jane stashes the leftovers in an oversize purse.

A look back at their courtship and entry into food writing, "Two for the Road" opens in New Haven, Conn., in 1970, when the couple -- two self-described dreamers with a streak of wanderlust -- found their studies in painting and art history challenged by "minor[s] in fried dough at summertime fairs [and] clams, chowder and lobsters all along the coast." A year later, after graduation, unemployed, aimless and "living in a little shack in the woods, hiding out from life," the Sterns say they were simply seized by an "an urge to just hit the road, to explore." That urge has never gone away. "Even now," says Michael, "the work we do is more about experience of a place rather than the food. Food on a plate in a vacuum is of virtually no interest to us -- it's the place, it's the people, it's the history, it's the smells and the sights." "Another part of it," chuckles Jane, "is that the idea of having a real job was so anathema to us, and we really wanted to hang out together -- and besides that, I knew I would be the world's shittiest faculty wife!"

The Sterns laugh a lot -- which any couple who've spent time together in the solitary confinement of a car will agree is itself quite a feat. In "Two for the Road," they write, "Travel did wonders for us as a couple. As we sailed along the highways and back roads ... we came to rely on each other's company and comfort. Despite frequent battles for the car's armrest and endless debates about which seafood shack ladled out the best chowder, our shared discoveries became a bond of security between us in an otherwise strange world ... At night, we clung to each other under thin [motel] blankets." A true team, in their books the couple write together in a universal voice -- and in person finish one another's sentences.

Still, despite their closeness, the Sterns are hardly clones -- especially when it comes to their picky palates. While an aversion to ketchup seems like it could be a real handicap for a road warrior, Jane, who has a fondness for flowing black garments and sports the tight dark bun of a flamenco dancer, claims to detest condiments of any kind. Also on her least-favorite list? Fish -- any kind except shellfish. But don't worry about her going hungry: While Michael's dining on fish and chips, she manages to keep herself busy, mostly, she says, by sampling pies.

Michael, tall and wiry with sandy hair and impish blue eyes, is an adventurous eater -- the kind of person who will try anything once, whether it is a fried pig's ear or steamed intestines. (The steamed intestines never actually made it into his mouth, Michael confesses; their odor was so nauseating, Jane says, that outside Brunswick County, Va., they had to toss the whole container from the window of their moving car.)

Today, though the two are still tireless explorers, ready to brave the icy stares of locals crowding Maryland's dive bars (the only place to find the state's signature "stuffed ham"), they long ago forswore backwater motels where "bathmats are made of paper like a diner place mat, TVs are chained to cinderblock walls, and you can only hope the people next door are not killers or hookers." Thankfully, 30 years on the road has provided them with a practical education that includes, not least, a method of bedding down in a motel without touching the bedspread and discerning the quality of a diner by its jukebox playlist. (If Hank Williams is on there, you've hit the jackpot.)

While it is their loyalty to independent restaurants and local food that has helped them amass a devoted following of readers over the years, food snobs the Sterns are not. In fact, they are almost studiously anti-trend, subsisting on a rotating menu of frankfurters, roast beef sandwiches and cream pies, and returning again and again to the same family-owned clam shacks, taquerias, coffee shops and barbecue joints. "I think we agree that the whole idea of rarefied food is ridiculous," says Michael. "People shouldn't feel like they need a degree in sustainable food management to enjoy eating," he laughs. It's not that the Sterns are offended by new ideas and tastes, explains Jane. It's that they think tradition is important and that change should be dictated by the way people actually live, not determined by some all-knowing arbiter of taste. "Meals and places that are about jagged, funky edges hitting one another -- I find that much more exciting than a food world that is fixated on the lineage of the mackerel I'm eating," says Jane. In truly democratic fashion, these days most of the places the Sterns profile in Gourmet and online at Roadfood.com come to them via reader tips.

Those tips are proof that the Sterns' passion is infectious. As with the folk artists they admire, there is a streak of the obsessive in their habits -- and their interests are not confined to the edible. They admit laughingly now that back in the early 1970s, when they first thought about writing a food guide, they planned to eat at every restaurant in the country; after a month, when they still hadn't made it beyond their corner of Connecticut, they realized they'd have to revise. But other infatuations soon followed -- with long-distance truckers, rodeos and flea market kitsch collectors. Along with their regional cookbooks, the Sterns have co-authored books about Elvis fans and the dog show circuit. "We just fall in love with things passionately: We want to be rodeo cowboys, we want to be truckers, we want to be a part of their world, to know them and love them," says Jane. "And I think that's what people relate to in our writing -- it's a genuine enthusiasm. Maybe because we feel so rootless in a way, it's so comforting to be around people who have such roots, such history and identity."

Like the blue roads they travel through the veins of America, wandering is now in the Sterns' blood. And they wouldn't have it any other way. After lunch, our pizza is packed into cardboard take-away boxes and the Sterns load into their car, radio blaring. "Feel like ice cream?" Michael laughs. "Because I know this great place down the road."