A second season's descent into weak plots, simpering idiots and scoundrels comes to an inconsequential end. 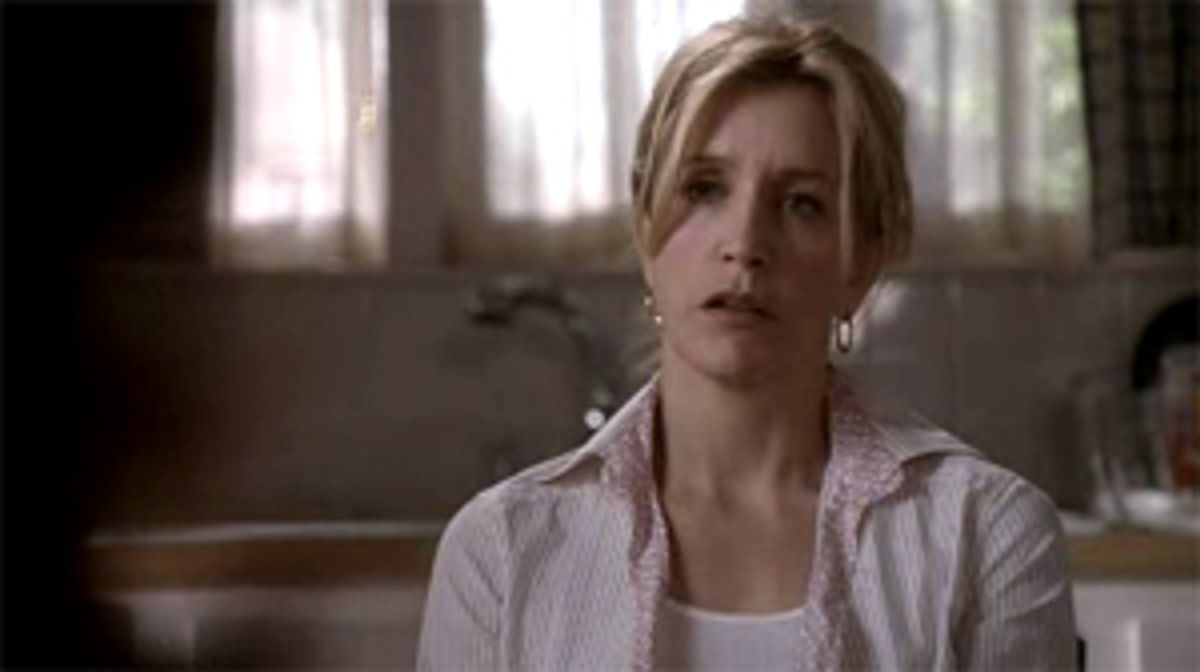 Why is the word "desperate" so often used to describe women? Whether we marry young, stay single too long, wait until our late 30s to have kids, stay home with our children, try to have a career and raise children at the same time, or do pretty much anything at all over 50, we're characterized as wanting too much, or as having made some crucial mistake that dooms us to a compromised existence.

When I first heard the title "Desperate Housewives," I loved it, because it purposefully toys with our notions about women, marriage, domestic life and raising children in the suburbs. As the show premiered, Marc Cherry often repeated his subversive inspiration for the show, telling the story of how he and his mother were watching a news report about Andrea Yates, the Texas mother who drowned her kids. When it was over, Cherry's mother remarked that there were times when she was capable of that level of desperation and rage. Her comments made him consider just how dark and taxing being a wife and mother could be for women, and the show emerged out of that curiosity. Cherry seemed to empathize with the challenges women faced to overcome emotional isolation, and to tell a different, less desperate story about their lives.

But then "Desperate Housewives" became widely popular, its stars plastered on the covers of "Vanity Fair," and dozens of other glossy magazines. What once seemed a coy, ironic title somehow felt less subversive in the hands of the mainstream media and millions of fans across the country. It didn't help that the show's four lead characters quickly morphed into cartoonish, slapsticky versions of real people. What started as a dark drama with a mystery at its center tripped and fell into a muddy puddle of pandering comedy every few steps. Not a bad thing, if the comedy is actually funny, but in the case of "Desperate Housewives," it meant Bree (Marcia Cross) overreacting to an imperfect birthday cake, Lynette (Felicity Huffman) popping Ritalin or spying on her husband, and Susan (Teri Hatcher) knocking stuff over, giggling hysterically, and being caught in the middle of a sneaky plan, like a painfully thin, charmless, unamusing version of Lucy Ricardo.

Instead of directly confronting their problems, these women consistently scheme and strategize and lie and manipulate. We're supposed to believe that a woman as smart and as direct as Lynette would pack up and leave her husband before confronting him about cheating, or that Gabby (Eva Longoria) would make her maid Xiao Mei get a pelvic exam to find out if she's a virgin instead of simply asking her husband if he's having an affair. After a lifetime of being manipulated and rejected by her husband, Susan still accepts a house from him when it means alienating herself from the man she loves, and Bree, fresh from a mental institution and a deadly standoff with her daughter's boyfriend, accepts flowers from yet another psychopath she hardly knows.

On top of that, these women rarely confide in each other along the way, so we're left in the dark about why they make such crappy decisions, or what's going on in their confused heads. Rather than examining the odd nuances and rules of female friendships, or exploring the isolation a woman feels at home or in the workplace, we get flat characters with wrong-headed plans to handle patently evil adversaries -- the creepy pharmacist, the evil dentist, the murderous son, the slightly demonic, unhinged teenage boy, the temptress maid. Cherry took a landscape with immense possibility, and paved it over with simpering idiots and villains so uninspired they might as well be cackling demonically and wearing black capes half the time.

In its second season, critics have claimed that "Desperate Housewives" fell from its great heights of mystery and hilarity, but for those of us who started to dislike the show during its first season, one fantastical story line was about as good as any other. Lynette and Bree remain the two most watchable characters -- at least their particular blend of neurotic tics are a vague reflection of women held hostage by their circumstances in life. Gabby and Susan, meanwhile, alternately bat their eyes and squawk through one ridiculous situation after another. Both women are encouraged to overact, and their characters, who seem relegated to behaving like dimwits week after week, are beyond grating.

Furthermore, the big mysteries of this season don't feel character-driven, organic or remotely compelling. Unlike the death of their shared friend last season, the arrival of a stranger Betty (Alfre Woodard) with a dark secret is hardly enough to spark our curiosity. Orson (Kyle MacLachlan) the evil dentist replaces the evil pharmacist in romancing Bree, and even when he unexpectedly runs over Susan's beau, Mike, with his car in the last few minutes of the finale (presumably because Mike seems to have known him when he was an evil prison dentist) that back story already seems about as fascinating as Betty's go-nowhere son-in-the-basement mystery. Looney Zach (Cody Kasch) kills his mean grandfather and inherits a fortune, leaving his nasty father to rot in prison, all of which feels utterly inconsequential. And Carlos (Ricardo Chavira) really is sleeping with the maid/surrogate mother of his and Gabby's unborn child. But it's always been impossible to invest in such a crappy marriage, played by two mediocre actors, so why would we start now?

What makes the women of this show desperate, exactly? Instead of playing with our notions of maternal happiness, or toying with our expectations that single women should be miserable, "Desperate Housewives" paints all of its lead characters, with the notable exception of Lynette, as utterly overwhelmed by their circumstances no matter what those circumstances are. Gabby is a manic, scheming harpy in a loveless marriage, Bree is a crappy, controlling parent who can't resist the charms of psychopaths, and Susan spends most of her time on-screen doing exactly what she does in the last few minutes of last night's season finale: Waiting cheerfully for her prince to come, stopping only to stare at her finger and imagine a diamond ring there. It's disappointing that the one show dominated by female leads winds up making each of those women look weaker and weaker by the second. Even Felicity Huffman, for all of her excellent bluster and fine acting, has one demeaning situation after another to contend with. Her saving grace is that she actually manages to make her character seem like a real human being in the face of adverse circumstances. The other three actresses don't even come close to accomplishing this.

"Sex and the City" was often criticized for making women look like fickle, man-crazy expensive-shoe-obsessed lightweights, but for all of their petty trials and tribulations, the four lead characters usually emerged armed with new wisdom and understanding of themselves. The HBO hit was dark, sure, and it certainly didn't shy away from demonstrating a distinctly female flavor of desperation. But somehow, Carrie, Miranda, Samantha and Charlotte managed to assert themselves, take control of bad situations, learn from their mistakes and confront those who messed with them head-on instead of scheming and lying and giggling and goofing up repeatedly like powerless fools. "Sex and the City" certainly wasn't perfect, but despite its flaws, Carrie and friends managed to turn a lot of myths about single women upside down, and through all of their absurd trysts with men, the writers were adamant about making sure that those women were never reduced to cliché, cartoonish versions of themselves. Even Samantha, the promiscuous man-eater who started out the first season depicted as slightly pathetic, soon transformed herself into a nuanced, original, strong woman. Most of all, "Sex and the City" made it clear, week after week, that women who go for what they want are anything but desperate.

Since it once seemed to offer a promising glimpse at the darkness of domestic life, it's a shame that "Desperate Housewives" got so sidetracked by silly plot twists, unexpected deaths and not-so-shocking surprises. In the one memorable scene from last night's finale, Lynette confronts her husband Tom's past lover, who's trying to blackmail the couple for years of child support for a kid they never even knew existed. After the woman raises her voice to cause a scene at the local diner, Lynette looks the woman right in the eyes and tells her, "Are we just gonna keep talking louder? Is that the plan? You wanna just keep raising your voice, because that's how you get what you want, right? You make a scene and throw a tantrum and everyone gets scared and backs off. Well, I don't work that way, lady. I don't care that my husband was so phenomenally stupid and/or drunk to actually have sex with you, I'm not going to let it ruin my life. Am I talking loud enough for that to get through to you?"

After hours of watching scheming, manipulative women get away with their idiotic plans, it's breathtaking to see Lynette suddenly take matters into her own hands and put a nasty schemer in her place. Against a hazy backdrop of murderous psychos and inarticulate buffoonery, the intelligence and wit of the scene really stands out, and for a moment, it seems like women can get what they want by directly asserting themselves. Suddenly it's clear that "Desperate Housewives" can be as dark and strange and funny as it wants to be without dooming all of its lead characters to a compromised, mediocre existence. It's just a matter of choosing to tell a different story.