Forget the Haight and Woodstock

A new book makes a compelling case that Laurel Canyon, home to Joni, Zappa, Mama Cass and many more, was the true center of '60s rock. 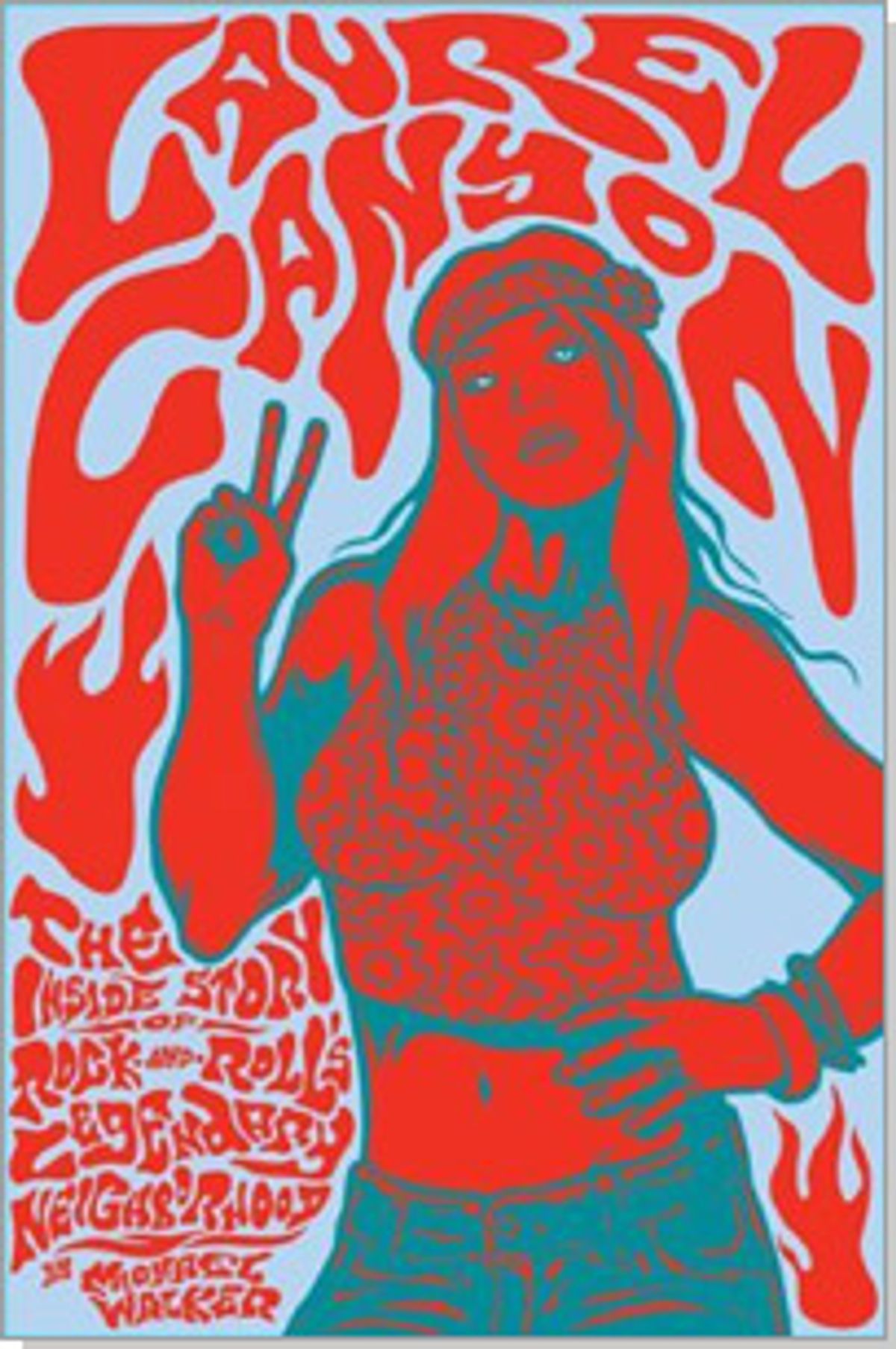 The '60s were all about neighborhoods. Haight-Ashbury, Greenwich Village, Berkeleys Telegraph Avenue, Watts, Tu Do Street, Harlem, Woodstock -- for Americans, at least, the decade was divided into a series of remarkable communities, some utopian and others nightmarish, each with a strong claim to being the epicenter of that turbulent epoch. After reading Michael Walker's "Laurel Canyon," I am tempted to present that honor to a few square miles of winding streets and aromatic scrubland just above Sunset Boulevard in Los Angeles, home to a mind-blowing concentration of the era's great musicians. After all, given our current reactionary political and cultural situations, the only undisputed area in which the '60s can still be said to remain ascendant is in the music it spawned. Today, even in the most backward-looking precincts of the republic, one can find the Doors or Crosby, Stills, Nash and Young playing somewhere along the FM dial. The lasting legacy of the '60s may wind up being nothing more than its music, and nowhere in America -- not Jerry Garcia's Haight or Bob Dylan's Village -- generated more of it than Laurel Canyon.

The roster of musicians and songwriters who set up camp there in the latter half of the decade is jaw-dropping. Perhaps most notable among them was Joni Mitchell, whose 1970 masterpiece "Ladies of the Canyon" ("Estrella circus girl/ Comes wrapped in songs and gypsy shawls") perfectly captures the community's heady bohemianism. Her lover Graham Nash lived with her there, and it was in Laurel Canyon that he hooked up with David Crosby and Stephen Stills. Others in residence included John and Michelle Phillips of the Mamas and the Papas, Carole King, Jackson Browne, Don Henley and Glenn Frey of the Eagles, Roger McGuinn and Chris Hillman of the Byrds, John Densmore and Robby Krieger of the Doors, John Kay of Steppenwolf, Mickey Dolenz of the Monkees and Mark Volman of the Turtles. Instead of Little League, pot luck dinners and PTA meetings, it was the sort of community where, according to one longtime resident, people had "listening parties," in which neighbors would "sit around the record player and smoke dope  When 'What a Day for a Daydream' came out, there was a party at somebody's house. People would dress up in their bangles and leather and buckskin and bring food and you'd sit there like it was a religious experience  and they'd play the damn thing for five hours. Then we'd have discussions about it."

The king and queen of the neighborhood were Frank Zappa and "Mama" Cass Elliot. Zappa's log-cabin house on Laurel Canyon Boulevard, once home to cowboy actor Tom Mix, was a nexus for all manner of musicians and countercultural warriors, including the GTO (Girls Together Outrageously) groupies and a Dionysian dance troupe led by the notorious freak Carl Franzoni (who demurely referred to himself as "Captain Fuck"). This psychedelic playpen was presided over by the workaholic, straight-edge Zappa, who tolerated all manner of primitive behavior but ran against the era's zeitgeist by discouraging drug use on the premises. Just a few blocks away lived the valley's other maven, Mama Cass, who proved to be a very different sort of host. Her home was "the canyon's de facto salon, a rock-and-roll Bloomsbury" where musicians could seek refuge from the canyon's more atavistic pursuits.

Cass comes across as the book's most attractive celebrity. "She had a nurturing personality as expansive as her girth, plus a quick mind and highly evolved sense of humor. Inevitably, her obesity kept her from being a sexual object, and that in turn allowed her to become closer to many of the canyon's male musicians than they, or she, might otherwise have allowed  In a scene rapidly filling with priapic young men bursting with talent and ego, Elliot's home was a neutral ground where they could share food, dope, songs, and something approaching real friendship." This earth mother hospitality led to perhaps the most serendipitous meeting in the canyon's history when, in 1967, Cass brought together former Buffalo Springfield guitarist Stills, Byrds refugee Crosby and Hollies survivor Nash for a jam session. The rest, as they say, is history.

Although Walker generally succeeds in presenting '60s Laurel Canyon as a sort of paradise on earth, the era's darker side cannot help filtering through. One particularly troubling moment involves the treatment of Godot, the 2-year-old son of a psychedelic dancer and sculptor named Vito Paulekas, during one long night of partying. "They passed that little boy around, naked, in a circle with their mouths," a witness remembers. "That was their thing about 'introducing him to sensuality.' That was well known. It was billed as something you could do." Even though it is not clear what part of the poor boy was being collectively mouthed, this remains an image that smacks more of hell than paradise. Not surprisingly, perhaps, young Godot was to die soon after, accidentally falling from the scaffolding in his father's studio. Later, on the night of the 1968 California Democratic primary, many of the valley's hipper denizens gathered at the Kaleidoscope, the famous rock club just down from the canyon on Sunset Boulevard, to commemorate the sham candidacy of comedian Pat Paulsen. The party featured "the comedian dressed as George Washington riding onstage on a white horse. Mama Cass Elliot appeared as Betsy Ross, sewing an enormous flag." The fun ended abruptly when news came in that the elections winner, Robert Kennedy, had been gunned down at the Ambassador Hotel just a few miles away.

A year later, the canyon's permanent open house atmosphere ended for good when Manson family members went on their bloody rampage in nearby Benedict Canyon. As Walker deadpans, "The murders forced L.A.'s counterculturalists to confront the possibility that not everyone with long hair under thirty was their brother." The author also gives a sense of the pervasive misogyny that percolated beneath the era's bright veneer of freedom and equality. For every Joni and Cass there were hundreds of girls of spirit and talent who could ascend no higher up the food chain than groupie or go-go dancer. No matter how close the ladies and gentlemen of the canyon came to making a paradise on earth, reality had a nasty habit of intruding.

With the advent of the '70s, any notion that Laurel Canyon represented some sort of utopia faded. It became just another exclusive community, where people with more freedom than sense staggered home to nurse hangovers. The main reason for this transition was chemical, as the stardust of Joni Mitchell's Woodstock generation was replaced by a different sort of powder. Cocaine proved a far less enlightening drug of choice than pot and acid -- Walker notes that "there is universal agreement that it leeched whatever charm and innocence, real or imagined, the canyon scene still possessed." Where drugs in the '60s were seen to create a new sort of social cohesion -- the druggy classic "Don't Bogart That Joint" was written in the cellar of Zappa's cabin -- in the '70s they began to turn the canyon into a paranoid neighborhood full of fences, locked doors and suspected narcs.

The real action migrated several hundred yards south, down to Sunset Boulevard, where various anti-utopian musical movements played out. The Rainbow Bar and Grill opened in 1972, and not far from that was the Continental Hyatt House, or "Riot House," immortalized in Cameron Crowe's sweetly nostalgic film "Almost Famous." Influenced by Led Zeppelin and other acts who had precious little to do with the gentle folk rock of the Byrds or the avant-garde theatricals of Zappa's posse, "The canyon in the 70s more closely resembled a Dionysian playground with no compensating worldview beyond having a really, really good time." Glam, punk, disco, metal -- the glitter decade's movements came and went with only a passing relation to the canyon. Two grim events at the end of the '70s put paid to any claim it might have to mythical status. One was the terrible fire in September 1979 that destroyed many of the structures that had a decade earlier given birth to the songs now filling our FM playlists. And then, two years later, four people were brutally murdered on Wonderland Avenue in a drug-related revenge killing that involved porn star John Holmes. "Porn stars, moldy drug misanthropes, and murder were about as far as you could get from peace, love, and understanding. And with that, Laurel Canyon lost whatever pretext of innocence it clung to as the 80s bore down."

Walker, who has written about pop culture for the Los Angeles Times and Rolling Stone, has created an exhaustively researched and richly anecdotal book that will fascinate both rock aficionados and cultural historians. With a few notable exceptions, Walker seems to have spoken with a wide array of the Canyon's surviving residents, from Graham Nash to super-groupie Morgana Welch; from the groundbreaking band manager John Hartmann to Zappa's widow, Gail. Particularly valuable are his histories of the legendary clubs just down the hill from Laurel Canyon, most notably the Rainbow, the Troubadour and the Whisky a Go Go. Unfortunately, his account is often undercut by prose that reads like it comes from Tiger Beat. "Just when L.A.'s singer-songwriters and country-rock cowpokes looked as if they had a lock on Sin City in the 70s, Los Angeles and the Canyon were rattled by one of those rude imports that England likes to lob at the former colonies to remind them the sun hasn't entirely set on the empire," he writes at one point. "It had been roughly ten years since the British invasion taught L.A.'s feckless folkies and surfin' safarians how to be rock-and-roll stars; now the Brits meant to set the agenda again, this time with a superfabulous confection known as glam." The book would have also benefited from a little less time spent detailing the post-'60s era and the addition of a few more interviews with some of the key players in the heyday such as Mitchell, Stills and David Geffen. When Walker focuses on that brief flowering in the '60s, however, "Laurel Canyon" proves a strong addition to the era's literature. At these moments, the author really does make you believe that, for a few short years in a hidden part of Los Angeles, the '60s were a place as much as they were a dream.