A new director takes too many liberties with the popular comic-book film franchise, but captures its poetry and pathos. 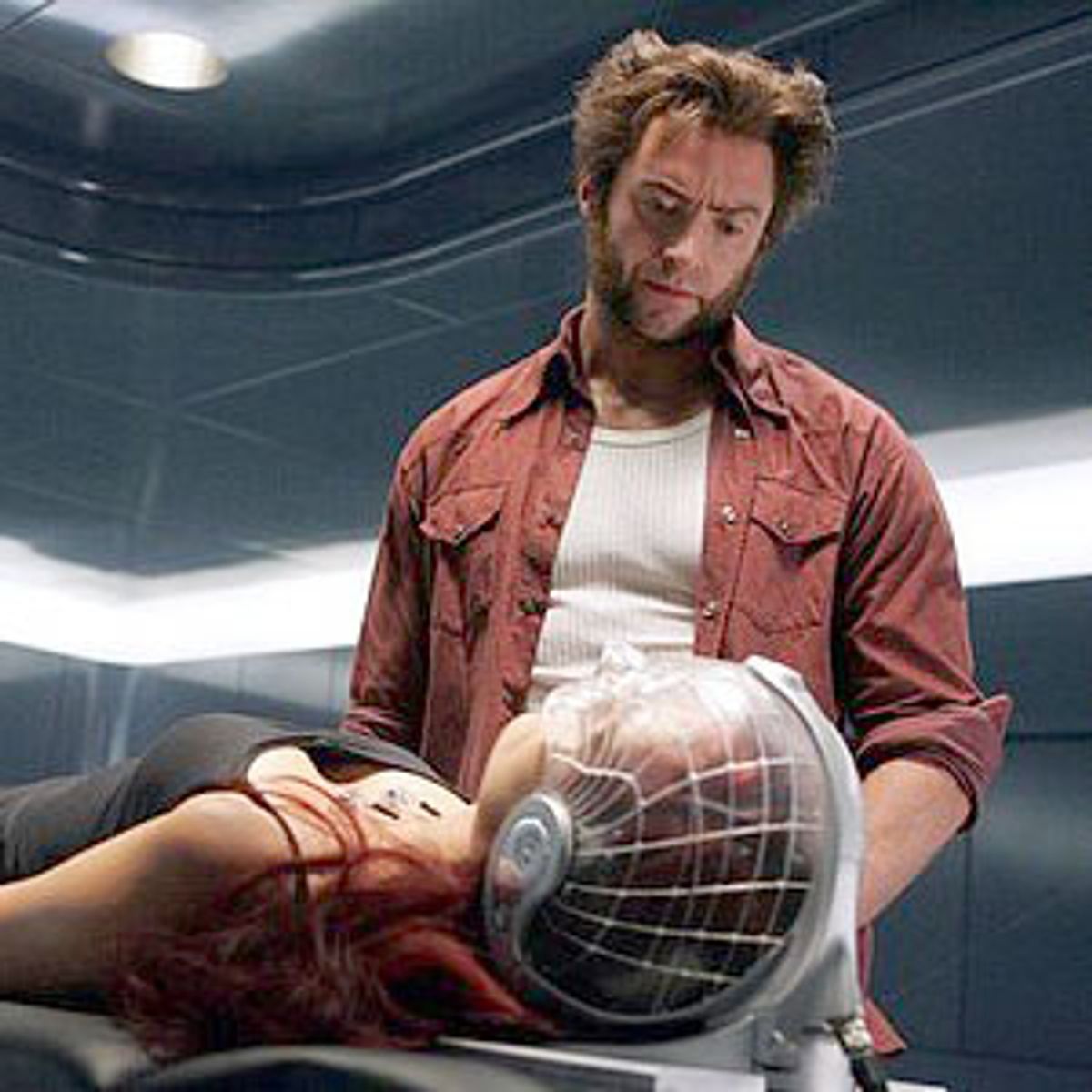 Very early in "X-Men: The Last Stand," a fair-haired, preteen mutant -- we don't yet know his name -- stands in front of his bathroom mirror in tears, struggling to complete some barbaric grooming ritual that we can't quite see. His father bangs on the bathroom door, knowing, as we do, that the boy is trying to hide something -- but what? The camera gives us a few quick clues: First, a few household implements streaked with blood, which the boy has thrown to the floor, frustrated by their uselessness; then a scatter of white feathers on the pristine tiles. But the frustration on the kid's tear-stained face is even more distressing than the suggestion of his self-mutilation. So we're not particularly surprised or shocked when the camera shows us, not directly but reflected in the bathroom mirror, the bony, bloody bumps on this kid's back: He's been trying to hack the feathered wings that sprout from both sides of his bony spine -- to literally clip the very wings that set him apart from everyone else he knows.

The brutal beauty of the image is a mini-encapsulation of the appeal of the "X-Men" comics, created by Stan Lee and Jack Kirby more than 40 years ago: For lots of kids, these stories of mutants who band together to fight evil have been a metaphorical salve for the way our bodies turn against us in adolescence -- or maybe more specifically for the way, during adolescence and even beyond, our sexual impulses sometimes seem to be fighting against us. But what's most surprising about this small, lovely sequence in "X-Men: The Last Stand" is that it's been given to us by perhaps the last director we'd think would be capable of such bluntly effective poetry: Brett Ratner made a name for himself with the hugely popular but instantly forgettable "Rush Hour" movies, clattery action pictures with chunks of metal for brains. The first two pictures in the "X-Men" franchise, the smart, emotionally complex "X-Men" and the slightly less rich but no less entertaining "X2: X-Men United," were both directed by Bryan Singer, who clearly understood the lush emotional possibilities of the material. I suspect many fans of the first two pictures feared, as I did, that Ratner would simply make a mess of the third.

The good news is that "The Last Stand" is only half a mess -- and even with all its flaws, it's an enjoyable diversion that shows both respect and affection for the formidable legacy of the "X-Men" comics. That's not to say that Ratner and his screenwriters, Simon Kinberg and Zak Penn, haven't taken some bodacious liberties with the source material. "The Last Stand" is based partly on "The Dark Phoenix Saga," by Chris Claremont and John Byrne, an operatically intense work in which Dr. Jean Grey, or Phoenix (played in the movies by Famke Janssen), becomes a Kali-like creature whose destructive impulses are strong enough to obliterate whole solar systems -- but who also still has the physical and, to an extent, the emotional makeup of the "good" Phoenix, which means her colleagues are torn between destroying her and saving her.

If radical departure from the original text is going to rob you of sleep, don't even bother to see "X-Men: The Last Stand": Ratner uses only the essential ideas of "The Dark Phoenix Saga," and he enlarges certain characters' roles while diminishing others. But while he could have stuck a bit more closely to the "Dark Phoenix" narrative than he did, "The Last Stand" at least retains some of the spirit of the source material. And particularly in the finale, Ratner manages to capture some of its majesty.

In fact, the biggest problem with "The Last Stand" isn't that it lacks feeling; it's simply that it's too cluttered with characters -- characters that we'd like to see more of -- to have the emotional resonance it should. There's a lot going on here, and Ratner pedals fast to cram it all in. Cyclops (James Marsden), still grieving over his fiancée Jean's death, discovers that she's still alive, in a manner of speaking: She looks and sounds like Jean, but, as Charles Xavier (Patrick Stewart), the mutants' leader and good-guy role model, explains, she isn't the same Jean all the X-Men mutants used to know and love. She's a creature reduced to her most elemental components, "all desire, and joy, and rage," as he puts it. What's more, a fat-cat captain of industry, Warren Worthington II (Michael Murphy) -- the father of the boy we met in that early scene, who has grown up to be Angel (Ben Foster) -- is pushing a "cure" for mutancy, which will at last give the mutants a chance to be like everyone else. But is that what they want? And if some do make that choice, will they be viewed as traitors by others of their kind? Magneto (Ian McKellen), Charles Xavier's onetime friend and now rival, believes the cure is a danger to mutants everywhere -- a Holocaust survivor, he's ever mindful of humans' potential to commit genocide -- and hopes to harness Phoenix's dark powers in a war against the humans.

The inherent possibilities in those infinitely interlocking stories are so vast that Ratner can only touch on them. The other problem is that he's simply working with too many characters. "The Last Stand" introduces several characters new to the movie franchise (though not, of course, to the comic-book series): In addition to Angel, there's Ellen Page's Kitty Pryde, who can walk through walls; Vinnie Jones' Juggernaut, a witty reinvention of the circus strongman; and Kelsey Grammer's Beast, a furry, blue tough guy who's also a charismatic and eloquent diplomat. (Tucked into the margins are Eric Dane's Multiple Man and Dania Ramieriz's Callisto, who can instantly read the powers of her fellow mutants.) Ratner also, of course, has to make room for all the old favorites, including Halle Berry's Storm (who has more lines than she's ever gotten in either of the two previous pictures, and yet barely any more presence), Rebecca Romijn's sleek blue Mystique, Anna Paquin's Rogue, whose touch has the power to kill, and Hugh Jackman's cigar-chomping townie roughhouser, Wolverine, with his adamantine claws and ability to heal his own wounds instantaneously.

"The Last Stand" is a hugely ambitious picture, and it would have been far more successful if Ratner had scaled it down to focus more on the interaction between the characters. Because despite a jazzy destructo-sequence in which Phoenix unleashes all the fury of the universe, and a sprawling showpiece in which Magneto, clad in his ludicrous yet comfortingly nostalgic-looking art-deco bee helmet, bends the Golden Gate Bridge into a shape that pleases him, it's the relationships between the characters that mean the most in the "X-Men" universe.

Ratner is sensitive to those relationships; the problem is that he just doesn't give himself, or his actors, the space to explore them. Some of the characters appear only as afterthoughts. And even after they undergo changes that could fundamentally affect our feelings for them, they're simply dropped from the plot. After one such major transformation, Magneto glances disparagingly at the now-ordinary mutant and sneers: This creature has outlived its usefulness and, to him, is no longer beautiful. The moment is potent for the way it cuts straight through Magneto's hypocrisy -- his obsession with the rights of mutants renders him unwilling, or unable, to recognize the individuality of humans. But Ratner barely allows the moment to resonate -- he doesn't have that much time to spare. And the character in question virtually disappears from the movie. There's also not nearly enough of Rogue, who, for reasons that are deeply poignant, would find a "cure" irresistible: She's unable to touch anyone she loves, including her boyfriend, Iceman (Shawn Ashmore). But again, the picture simply careers off that subplot as if it were a pinball-machine bumper.

It's weird, too, that Janssen's Phoenix, so pivotal in the story, doesn't have many lines, or even many significant scenes. Janssen isn't merely a pretty actress: Her finely chiseled beauty is its own kind of vitality. But aside from a crucial scene with Wolverine, in which she seduces him in a way that the "real" Jean Grey never would, she barely registers.

At least not until the movie's climax, where Ratner manages, almost miraculously, to combine action and pathos in a way that makes the movie's flaws recede, even if only temporarily. Ratner is fully attuned to the emotional underpinnings that have made the X-Men comic books so enduring, but he seems to have been distracted by the challenges posed by the comics' narrative complexity. "X-Men: The Last Stand" is more rushed and jumbled than it needs to be. Even so, scenes like that early one, in which Angel tries to make himself over into someone he's not, suggest that there's more to Ratner than many of us would ever have suspected. What would "The Last Stand" have been like if only Ratner had slowed down and taken one panel at a time?