Thousands of Americans buy cheap prescription drugs in Mexico. Some end up in squalid south-of-the-border prisons. 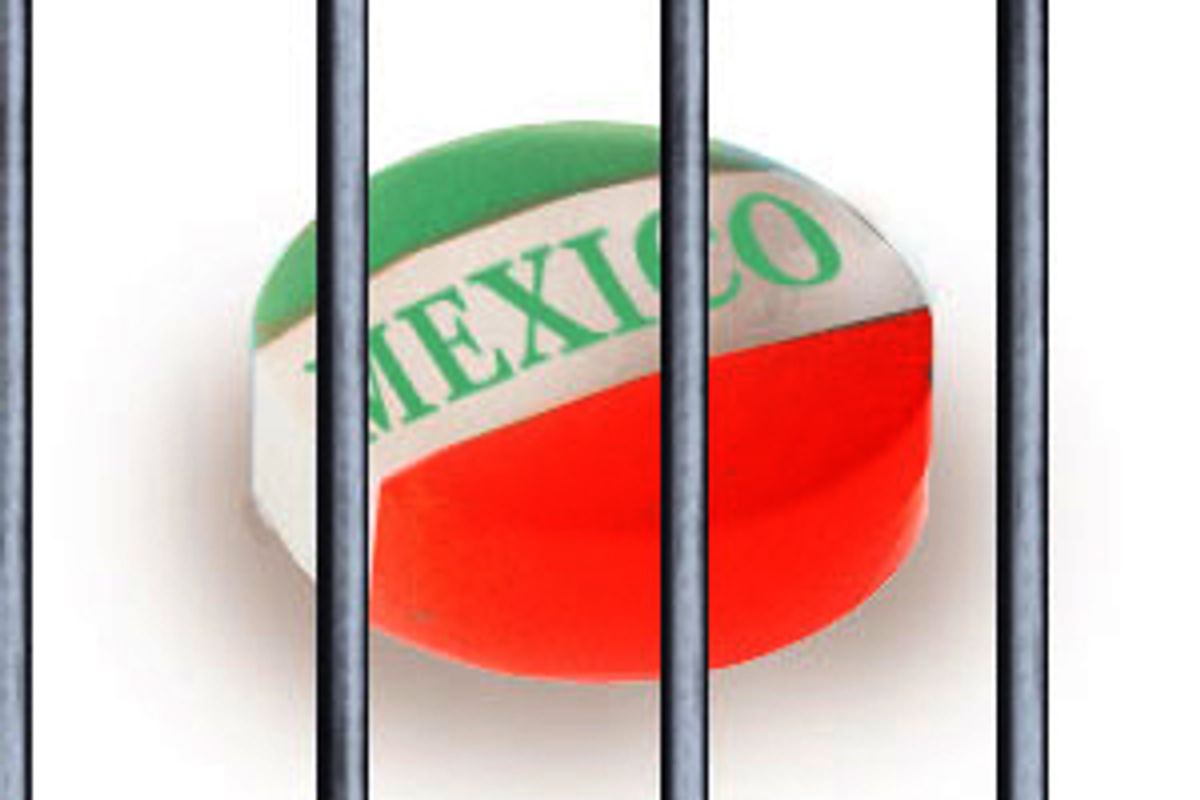 Three years ago, Dawn Marie Wilson found herself in a cement cubby infested with cockroaches and maggots. It was a cell in a prison in Ensenada, Mexico, and it had no toilets, no showers, not even a bed: Wilson slept on the floor. Her biggest luxury was a bucket for washing, and the only way to get basic amenities like plates and forks, blankets or drinking water was to buy or beg for them. "It was disgusting," she recalled, as she quietly sat, almost two years later, in the empty rec room of a federal prison in Dublin, California. "There was prostitution and drugs everywhere -- heroin, crystal meth, marijuana. I'd be sitting at a table with someone shooting up next to me. I kept thinking it would be over at any minute. I thought, This can't last." But it did last. Wilson, a 49-year-old conference planner from San Diego, ultimately spent 21 months in jail in Ensenada, and another two months in a U.S. prison, for something she says she didn't even realize was a crime: buying medicine from a pharmacy in Tijuana without a prescription from a Mexican doctor.

Wilson was one of the thousands of bargain-hunting Americans who pour across the border every day to buy pharmaceutical drugs -- from Valium to Viagra, Oxycontin to Ortho Novum -- at a fraction of the American price. Border pharmacies sold $800 million worth of drugs last year to Americans, according to Marv Shepherd, M.D., director of the Pharmacoeconomic Center at the College of Pharmacy at the University of Texas in Austin; the average age of the buyers was roughly 34 (about 15 percent were senior citizens). "It's clear that there are more people coming across to buy drugs," says Liza Davis, spokeswoman for the U.S. Consulate in Tijuana. "This is the busiest land border crossing in the world, and it's easy. You just walk across and there are pharmacies right there."

Few of these Americans have any idea that what they are doing is often illegal in Mexico; that may explain why in 2004, the number of Americans arrested for the crime nearly doubled, from 25 to 43 (in 2005, thanks in part to better publicity about the law, the number fell back to 26). Davis says the U.S. Consulate is unclear whether this spike in arrests happens because of a police crackdown, or simply as the result of the rising number of Americans crossing the border. But they are worried. Drug buyers who are stopped are in for a rough ride: time in a Mexican jail, hefty bribes to the police, and even, says one woman, a rape by the officer who took her into custody. "What a price to pay for doing something without even thinking!" says Wilson. "I'm a perfect example of the worst that can happen."

In Tijuana, 30 yards from the U.S.-Mexico border at San Diego, lies the tourist strip of Avenida Revolucion. Here, sandwiched between margarita bars catering to underage college students and the shops selling cheap sombreros, stand hundreds of pharmacies with names like Farmacia E-Z and Drug Depot. On the weekends, Americans of all ages cruise the streets to a blaring soundtrack of Mexican techno, examining hand-written signs that advertise brand-name drugs: Ritalin, Zoloft, Xanax, Meridia. Depending on the pharmacy, the drug and the customer's talent for haggling, the cost can be 50 percent to 75 percent less than it would be in the States.

This zone of Tijuana pharmacies is where Wilson says she stopped two years ago before driving south down the coast to meet her fiancé, whose sailboat was in port in Puerto Escondido. She says she needed a three-month supply of Dilantin and phenobarbital, which she takes to control seizures she's had since childhood. The pharmacist she visited didn't ask to see a prescription, and drugs that would have cost her $210 back in the States cost her $30 instead.

After her errand in Tijuana, Wilson says her car broke down just outside Ensenada. The next morning, when she walked back to the mechanic at 6:30 a.m., she was stopped by the police. They rifled through her bag, found her pills and arrested her. The police confiscated Wilson's credit cards, passport and $400 in cash; another $4,000 was charged to her credit card while she was sitting in jail.

The case quickly devolved into a matter of Wilson's word versus the officers'. Mexican police records state that Wilson had 445 pills, including large quantities of the psychotropic drugs Valium, Xanax and Darvon, and that she readily admitted being a drug addict. Wilson says that's nonsense. She says she had only her anti-seizure medications, a small amount of Valium her doctor had prescribed for anxiety, and a bottle of diabetes medicine she had brought with her from California to deliver to a friend in Mexico. Because American-style bail does not exist in Mexico, Wilson spent the next year and nine months in the crude Ensenada jail waiting for her case to wind through the court system. She had no translator for her trial, and her first attorney, whom she had hired through a friend, failed to even call Wilson's doctor in the United States to confirm her prescriptions. She fired him, but by that point it was too late: She was sentenced to five years in Mexican prison for a crime that, in the United States, would have been punishable by a maximum of six months. When she heard her sentencing, "I was almost afraid to cry," she says. "I was afraid I would reach that low point and not come back."

Tijuana police say most Americans who are stopped for buying prescription drugs are let go after 72 hours, provided they have small quantities of drugs and can produce an American prescription for what they bought. Rogelio Guillen, the captain of the tourist division of the Tijuana police, says he primarily arrests traffickers buying thousands of dollars' worth of drugs like Valium and Ritalin in order to take it back to the States and sell it at a profit. "Of all the people who come to Tijuana to buy drugs, only about 20 percent to 30 percent are coming to do legal transactions," Guillen says. "We don't have a problem with that kind of person." But the U.S. Consulate tells a different story: Although arrests like Wilson's are relatively rare, Americans buying prescription drugs for legitimate purposes are frequently stopped by corrupt police who demand a bribe instead. "A great many are the victims of a scam," Davis explains. Typically, a pharmacy sells American customers medicine without a prescription, and then calls the police, sharing in the bribes that the police collect.

This, says Dana Conour, is exactly what happened to her. Conour, a 33-year-old resident of a small town in Iowa, crossed the border with her husband and 10-year-son to refill a prescription in October 2003. She was on an extended vacation in Southern California and running low on Ritalin, which her doctor had prescribed to control narcolepsy. California pharmacists wouldn't fill her out-of-state prescription, and she'd heard that prescription drugs were easy to get across the border. She had even called the Tijuana tourist board to double-check, and they'd given her the green light. "I wasn't naive -- I knew you could get anything you wanted," she says. "But I had no desire to do anything illegal. I wanted to get my medicine and get out." Minutes after buying 60 Ritalin pills, the family was stopped by policemen, who ushered them into a police station just feet from the border, strip-searched them, and then demanded a $600 "fine" for having the Ritalin without a Mexican prescription -- even though Conour had her American prescription with her.

While her husband and son went to the ATM with a police escort, Conour waited with the police captain, growing increasingly concerned about his aggressive behavior. He solicited her for sex; she refused. Then, she says, he pulled out his gun and raped her on the couch of his office. "I was in shock -- I couldn't believe that this was happening," she says. "At that point, I wasn't sure I was ever going to see my family again." Her family returned with the bribe money just a few minutes later, and Conour didn't tell her husband or the American authorities about her ordeal until they were safely back across the border. She's returned to Mexico twice in order to prosecute the police captain, a process that required her to confront him face-to-face in a hearing. A year later, the police captain hasn't been convicted, and Conour says her entire family is in counseling. "We were an outgoing family," she says, "but that's completely changed. We don't travel anymore."

The U.S. Consulate and the city of Tijuana recognize they have a problem on their hands. In addition to the crackdown on tourists, the Tijuana police arrested 35 pharmacists in 2004 for selling to Americans without a prescription, according to Guillen. The U.S. Consulate recently created a Web site and tourist handbook, available in stores on Avenida Revolucion, which explain that it's illegal to buy medication without a Mexican prescription. But Conour says that the dangers to Americans still aren't clear. "If I had known there was this major problem, I never would have considered going across the border," she says.

Even if these efforts make Americans more aware of the dangers they face when they buy drugs in Mexico, it may not do much to ease traffic on Avenida Revolucion. Many Americans can't afford not to take the risk, says Dee Mahan, deputy director of health policy at the consumer advocate group Families USA in Washington, D.C. "It's virtually impossible for most people to keep up [with rising drug prices]," Mahan says. "People are paying more and more, even people who have insurance." Meanwhile, drugs are radically cheaper in Mexico, thanks to a weak peso and a lower standard of living. Not only does the government there mandate low prices to fit the income levels of the Mexican population, but many drugs sold by U.S. companies are also manufactured in Mexico, reducing distribution costs. Although the cost of drugs has been a hot-button issue in the past two presidential elections, spurring President Bush to implement the new Medicare Plan D, prices continue to rise at three to four times the rate of inflation every year. And border traffic continues unchecked.

As for Dawn Marie Wilson, she was transferred to jail in California in October 2004, as part of a long-standing prisoner-transfer program between the United States and Mexico. After two months in federal prison, she was released for time served. She had her scars -- including a mangled finger, which was broken playing softball in prison and never treated by a doctor -- and deep worry lines around her blue eyes. But she's already been back to the prison in Mexico twice, bringing sewing machines as gifts for the inmates. And she does what she can to publicize the problem; during her imprisonment, Wilson and her boyfriend kept a Web page detailing their troubles and since her release she has been on CNN and other TV news channels discussing the issue. "Whatever I can do to spread the word that this can be a problem ... would give meaning to the whole ordeal," says Wilson. "I'm not the first person it's happened to, and I won't be the last."