All eyes on San Diego

If a liberal women's studies professor can win a congressional seat in this conservative bastion, November could be a GOP nightmare. 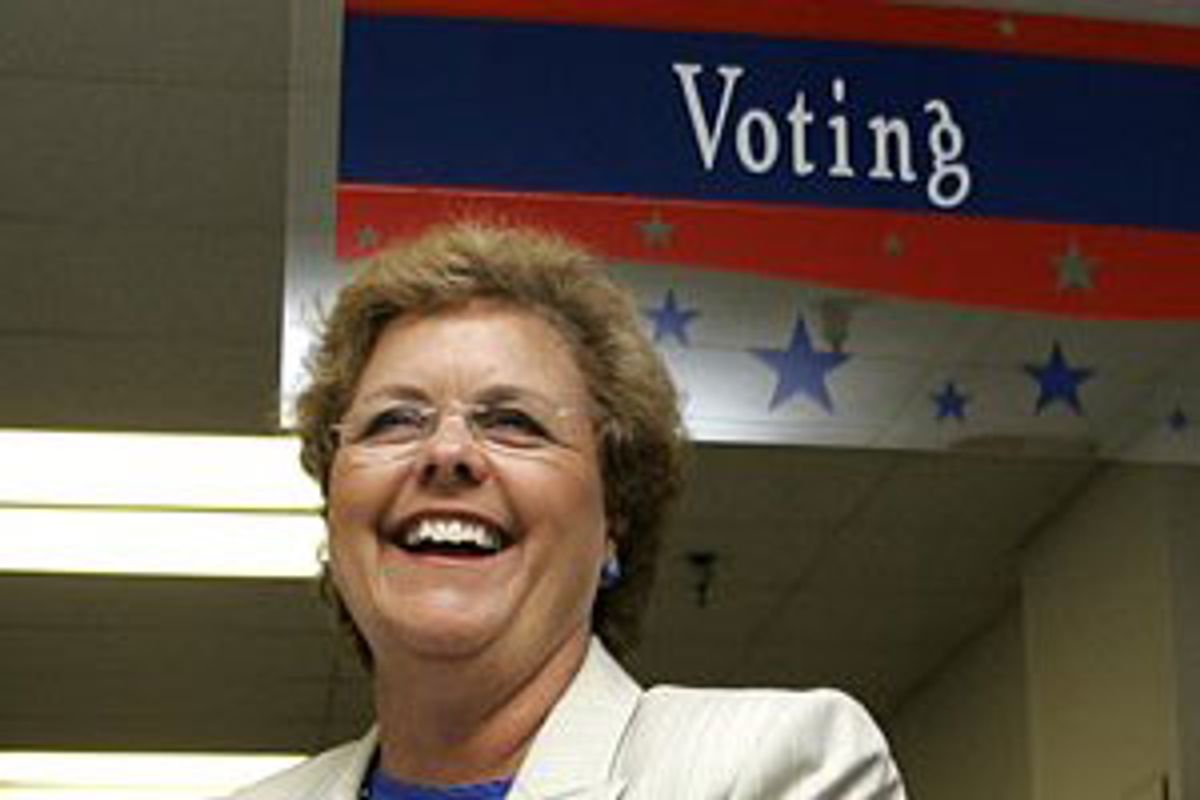 Made up of sleepy beach towns basking in the sun just north of San Diego, the California 50th is surely one of the most placid congressional districts in the country. But nobody would have known that Friday evening at the community center in Carlsbad, where emotions were running high. As surfers stepped off a gorgeous beach nearby, Democrat Francine Busby and Republican Brian Bilbray were exchanging barbs in their last debate before Tuesday's special election, an election "brought to you," as the moderator put it, "by congressional corruption." The district's previous representative, Randy "Duke" Cunningham, was in prison.

"I'm running to restore honesty and integrity to the representation of this district and in this country," said Busby, 55, a school-board official and local professor of women's studies.

"I believe that the amnesty of 11 to 12 million illegal aliens is absolutely absurd and disruptive," countered Bilbray, also 55, a former congressman and lobbyist.

But before Busby could go on, a man in his 50s from the almost entirely white, AARP-aged audience stood up and yelled out, "Yes, it is!" And thus a conservative heckler in sandals summed up the race, and, it may prove, the entire Democratic effort to recapture Congress.

The eyes of Washington are glued on San Diego, where a race this competitive -- polls show Busby and Bilbray running neck and neck --shouldn't even be happening. Voters in the dependable conservative redoubt line up as 46 percent Republican and 31 percent Democratic. After all, Camp Pendleton, the Marine base, sits to the north. The Miramar Naval Air Station ("Top Gun") is a few minutes' drive from the community center. This is the part of the state that gave California Proposition 187 -- the overturned initiative that attempted to deny illegal immigrants social services -- the Republican congressman who launched a recall of Democratic Gov. Gray Davis, and the vigilante border patrol group, the Minutemen. If a liberal women's studies professor can win here, the Republicans know November could be a nightmare.

Essentially, both candidates are running single-issue campaigns. Busby's gong is ethics, vague but effective. Bilbray's is immigration, effective but tricky.

As Busby wouldn't allow the crowd in Carlsbad to forget, corruption in Washington is rampant. Cunningham, after all, took over $2 million in bribes and evaded $1 million in taxes. Indeed, what she has going for her is a lack of connection to Washington and an endearing wholesomeness. She looks and sounds like the sort of women who would bring fresh-baked cookies, not talking points, to a debate. Local Democrats are excited if for no other reason than a Democrat has a shot at winning the 50th. And the higher-ups in Washington have sprung into action. The Democratic Congressional Campaign Committee has backed Busby's run with $2 million, and Sen. Dianne Feinstein, House Minority Leader Nancy Pelosi and presidential hopeful Mark Warner have all campaigned with her.

Not to be outwitted, the Republican brain trust behind Bilbray has decided that if the Democrats' silver bullet is ethics, theirs will be immigration, particularly for candidates in border states. So just as Busby brought everything back to Cunningham, Bilbray brought everything back to the border. A Democrat harping on character and a Republican talking about issues? There's a switch for you. The Republican National Congressional Committee has shoveled $4.4 million into Bilbray's campaign. And Vice President Dick Cheney came to California to campaign with Bilbray. Local Republicans, however, don't appear terribly enthusiastic about Bilbray, an affable candidate whose main appeal to many voters seems to be that he is a fellow surfer.

At the same time, Republicans have their fingers crossed. They need to see how far they can take immigration, and how far it will take them. The problem is that in California, where there are an estimated 2 million illegal immigrants, immigration is much more than a political point-getter. It is an epochal issue. It turns hundreds of thousands into the streets. It can break a state party, as California Republicans learned the hard way when Proposition 187 created a huge backlash against them. But what Bilbray has going for him -- what may end up hurting Busby, whose views on immigration are moderate -- is the fact that in the 50th, even Democrats often hold strongly anti-immigrant views.

"I'm voting for anyone who doesn't have a Latino name," John Lee, a car mechanic at a Shell gas station in downtown San Diego, told me. "I don't want to encourage any sympathy with these people who are coming here and taking our jobs and our money." Lee said that on other social issues, he was moderate, even liberal. Indeed, Lee readily admitted, he was gay. "I'd like to get married," he said. "But if it comes down to gay marriage or immigration, I've got to choose my priorities."

The GOP's stronghold in the 50th is in the sprawling tract-house cities of Escondido and San Marcos, where an agricultural past, a large retired military presence, and snowbirds from the Midwest and South have made for a historically conservative outlook. Here tirades against amnesty are to be expected. But even in the more lefty coastal enclaves, in Carlsbad and La Jolla and Encinitas (the latter is where Busby's storefront headquarters is located), it's not uncommon to hear anti-immigrant ideas. You can sit in a Mexican restaurant near the beach, and listen to a bunch of middle-aged surfers talk blithely about how they hate George Bush but also how they see the appeal of deportation. This, as one of the hardworking Mexican waitresses brings their guacamole and Coronas.

The bad news for Republicans, however, is that immigration has become not a unifier for the party, but a wedge. It seems it's every man for himself where cheap Mexican labor is concerned. Proof of this came just a few days before the debate. After Bilbray attacked Busby for supporting Sen. John McCain's moderate legislation, which creates a guest worker program and paths to citizenship, McCain abruptly canceled a campaign appearance with Bilbray.

Bilbray is not a recent convert to the issue of immigration. After representing the 49th district from 1994 to 2000, he became a lobbyist for the Federation for American Immigration Reform, a close-the-border advocacy group. Even so, he faces a spoiler in the Tuesday election in Independent Bill Griffith, a math teacher, and a hard-liner on immigration endorsed by the Minutemen. Griffith claims Bilbray, whose campaign catchphrase is "Proven Tough on Illegal Immigration" (his lawn signs are no-nonsense too, reading "Secure Our Borders"), is not tough enough.

Bilbray, in fact, is a moderate Republican. In the April primary, he beat a host of far-right candidates for the ticket. He is pro-choice, gets a mere 71 percent lifetime rating from the American Conservative Union, a C+ from the National Taxpayers Union, and a big fat F from the NRA. While in Congress in the 1990s, he was known for crossing the aisle and once stood beside Bill Clinton at a gun control rally, according to the San Diego Tribune.

Yet he remains firmly on the right over immigration. And "immigration is an issue on which [Bilbray] does well," said Jon Fleishman, a former executive director of the California Republican Party who now writes the conservative political blog FlashReport. "Conservatives' worry is that he's good on immigration because he's paid to be." Bilbray has painstakingly distanced himself from President Bush, who's become a liability to Republicans seeking both hard-right and swing votes. He did not mention Bush in his debate with Busby and has not referred to him on the campaign trail.

Still, Washington has kept a close eye on the race, and this may end up helping Bilbray. When I visited Bilbray's headquarters, in a tidy building in an office park in northern San Diego -- Republicans usually seem to favor office parks over storefronts -- a van-load of campaign volunteers from Idaho had just arrived. (They were extremely concerned about immigration, and not of the Canadian variety.) The party's last-minute extra efforts appeared to be paying off. Bilbray signs littered medians and intersections in the 50th, while Busby signs were hard to come by.

As of the debate, the race was too close to call, with Busby and Bilbray both polling at 45 percent. But a cloud descended on the Busby campaign over the weekend, when a recording of the candidate speaking to a Latino crowd in Escondido began circulating on the AM talk shows. In it, Busby tells the crowd they don't need papers to vote. She corrects herself, saying, "You don't need to be a registered voter to help." The story ran in the San Diego Union Tribune Monday. In a race that may come down to a few hundred votes, this is the kind of last-minute gaffe that could tip the balance.

If Bilbray prevails, Democrats may take some comfort in the gains made by Busby. In a district where Republicans far outnumber Democrats, it's a start. Besides, June 6 is only the first race. The two will square off again in November for the full two-year term.

James Verini is a writer in Los Angeles.