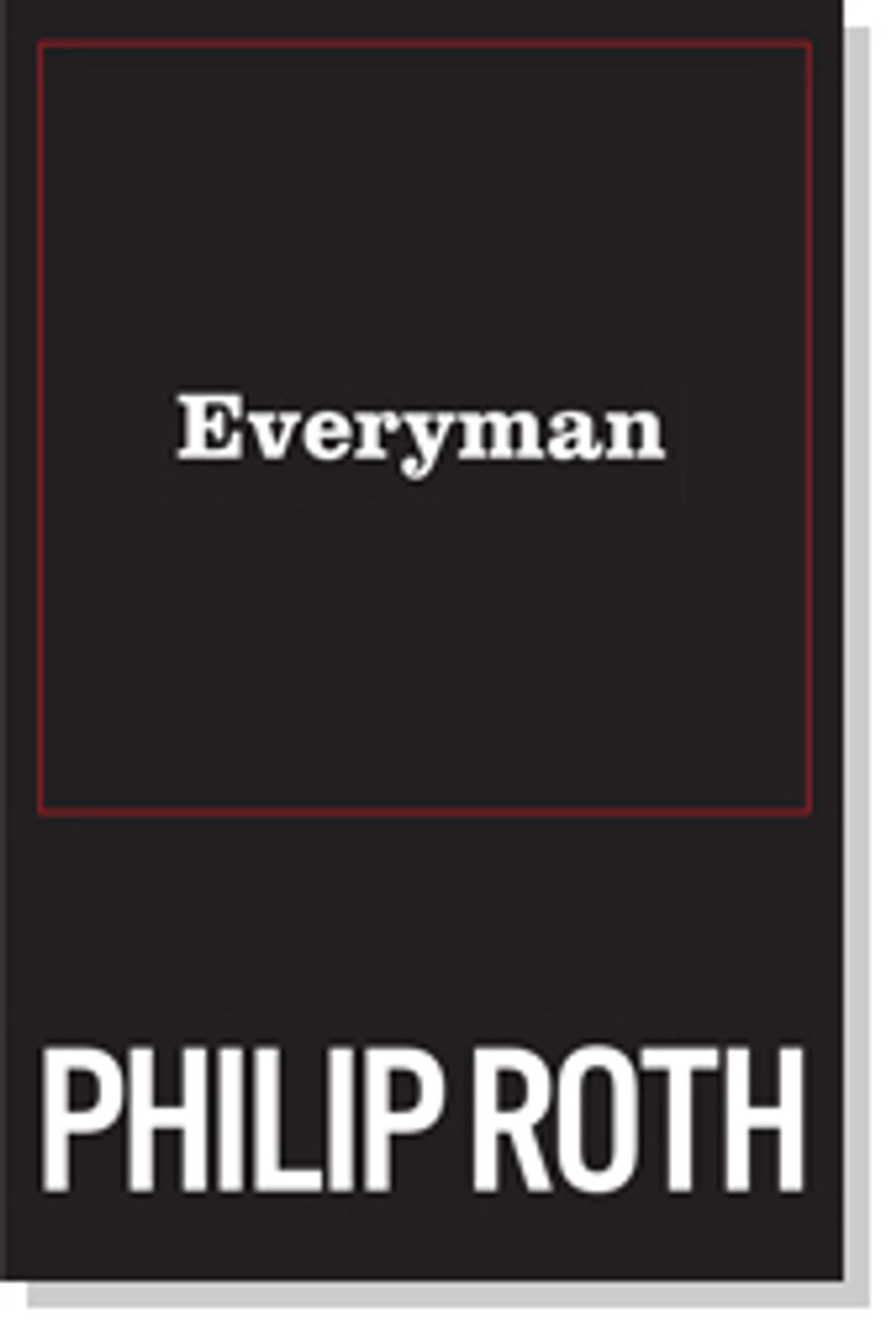 Philip Roth has let his characters talk more than any American writer working today, maybe more than any American writer ever. Portnoy, Zuckerman, Kepesh, Mickey Sabbath and the Swede, not to mention a host of subsidiary characters: Add up the sum total of their dialogues and monologues, their soliloquies and banshee wails, and then try to find a bigger collective mouth. Probably the most famous single word Roth ever wrote is at the end of "Portnoy's Complaint," and you can make the case that it's representative:

Someone, I'm not sure who -- it may have been Roth himself -- defined the essence of his style by coining the word "diatribalist," a nod to both his preoccupation with the Jewish experience in America and his characters' fierce assertion of themselves. That word ought to find its way into Webster's, with Roth's picture next to it.

This being said, the striking thing about Roth's new novel, "Everyman," is that its unnamed main character has so little to tell us. He may be the least prolix hero, if "hero" is even the right word, of any Roth novel. Why? The answer can be found in an even more striking feature of the book, the proliferation of bodily misery that is its preoccupation. Roth could just as well have called the book "Every Malady." In 180 slender pages, we encounter a hernia operation, a stomach surgery, a dead body washed up on a beach, a burst appendix, migraine headaches, another bad appendix, an open heart surgery, a renal artery angioplasty, a carotid endarterectomy, a silent heart attack, another angioplasty, the insertion of numerous heart stents and a cardiac defibrillator, a hip injury, brain cancer, a suicide, two strokes, a case of suicidal depression, a case of terminal cancer, and a death from more or less natural causes. And that's just the first three-quarters of the book, before the focus turns to what we know is coming for the main character.

Roth has said that the opening of the novel, in which its main character is buried in the same cemetery as his parents, was inspired by the real-life funeral of his friend Saul Bellow: Roth came home from the ceremony, sat down to write the next day, and out came a fictional funeral. The rest of the novel circles back to the hero's boyhood and brings us up to the moment of his death. We might be forgiven for hoping that, in Roth's hands, such a structure would hint at an effort to plumb to its fullest the life we confront at its terminus in the very first pages. Not so this time. The life as Roth retells it is of little consequence; death and decay are his preoccupations. And while his jeremiad against mortality undoubtedly has a certain fierce power, it reduces its main character to not much more than a body that lives in fear of the end. Death's wing touched him rather early: In the hospital for a hernia operation as a little boy, he watches as the doctors and nurses fuss over the boy in the bed next to his, watches as the boy's father leaves at the end of visiting hours with tears running down his face. In the morning, when he wakes, the bed is empty; the boy is gone.

In "The Dying Animal," Roth's most recent stab at the novella, David Kepesh -- the libidinous culture critic who appeared earlier in "The Professor of Desire" and "The Breast" -- says in passing toward the end: "In every calm and reasonable person there is a second person scared witless about death, but for someone thirty-two the time between Now and Then is ordinarily so vast, so boundless, that it's no more than maybe a couple of times a year, and then only for a moment or two and late at night, that one comes anywhere near encountering that second person and in the state of madness that is the second person's life." It's as if Roth, having heard this from the mouth of Kepesh, has now decided to fully explore its implications in another novella that reads like a weird inverse companion piece to "The Dying Animal." Indeed, we get almost nothing of Person No. 1 here, that dweller in daylight, vital and alive. Of his work life we learn nothing of note. Of his wives we learn mainly that he gave up his second for the pleasures of anal sex with a woman who became his third. Vast periods of contentment are dismissed in a sentence or two: "Twenty-two years passed. Twenty-two years of excellent health and the boundless self-assurance that flows from being fit -- twenty-two years spared the adversary that is illness and the calamity that waits in the wings." This is sandwiched between our hapless hero's burst appendix in his 30s and his open heart surgery in his 50s. Later on, another nine years are dispatched even more summarily.

Intriguingly, Roth's focus on "the state of madness that is the second person's everyday life" is not the only connection that can be teased out between "Everyman" and "The Dying Animal." Superficially, both are modest in length, and both appeared after much longer, much more political books (the latter after the postwar trilogy of "American Pastoral," "I Married a Communist" and "The Human Stain"; the former after "The Plot Against America"). Both are also more philosophical, essayistic even, than character-driven. (Speaking of which: Since when doesn't a Roth character get a name? Only, I guess, when he stands in for us all.) Both fixate on an essential aspect of the human condition, one on sex, the other on death.

In fact, the harder one looks, the more our man in "Everyman" begins to look like the precise temperamental opposite of David Kepesh. Kepesh chose a life of culture; everyman chose a life of commerce, as an advertising guy. Kepesh revels in the freedom afforded him by the sexual revolution; everyman "would have given anything for his [first] marriage to have lasted a lifetime." Kepesh is utterly without guilt or regret; next to his fear of death, guilt and regret are the dominant feature of everyman's emotional life. Kepesh disdains the son who disdains him for his freedom; everyman's two sons, bitter over his having divorced their mother, are among his most intense sources of remorse. Kepesh essentially offers us, in monologue form, a treatise on the pleasures available to the male body. Everyman thinks to himself that "should he ever write an autobiography, it would be called 'The Life and Death of a Male Body,'" with the emphasis on death and those aspects of life that point toward it.

Instead of getting the autobiography, we get the biography, authored by Roth, and the biographer's hands are all over it. As someone who grew up asthmatic and had knee and shoulder surgery before the age of 20, I've always been thankful the body's memory of pain and suffering is so short. Not so for everyman: "He'd married three times, had mistresses and children and an interesting job where he'd been a success, but now eluding death seemed to have become the central business of his life and bodily decay his entire story." One is forced to ask: So thinketh the character, or so sayeth the novelist? And if his job was so interesting, why do we get almost no exploration of it? Is this really what age has in store for us: "the process of becoming less and less ... the aimless days and the uncertain nights and the impotently putting up with the physical deterioration and the terminal sadness and the waiting and waiting for nothing"?

It seems no accident on Roth's part that the one vaguely heroic gesture in the novel is the suicide of a woman suffering from crippling back pain, a woman named Millicent Kramer whom everyman meets in a class he teaches on painting at his retirement community on the Jersey Shore. No impotence there. No waiting and waiting. If death haunts us from the shadows -- the relentless message of the novel, greedy death salivating with his sword drawn -- then Millicent at least had the courage to run to meet him. She even gets to have a name.

If all of this begins to seem less like what we expect from a Roth novel and more like a brief against our popular culture -- with its glorification of youth and sex and its belief in the power of pills to save us from the inevitable -- it also, in the end, basically confirms that culture's underlying assumptions: Old age is hell. Only in youth is there unsullied dignity. Beyond a certain age, all that remains to talk about is a litany of medical infirmities. The one representative encounter between youth and old age in the novel occurs when everyman approaches a gorgeous young jogger on the beach near his retirement community. He brazenly hits on her, and she brazenly returns his attention. He gives her his number. She promises to call. And of course she doesn't. She's just playing with him, indulging him, and he feels spited: "when he took his walks he never saw her again. She must have decided to do her jogging along another stretch of the boardwalk, thereby thwarting his longing for the last great outburst of everything."

"Old age isn't a battle," Roth writes, "it's a massacre." No doubt that's one way of looking at it. But Roth repeats this assessment so many times, in so many ways, that it begins to sound a little overinsistent. It's hard not to be reminded of something James Baldwin once wrote about the art of the novel, mainly because Roth so vigorously defies it. "No reader will believe you if you simply tell him what you want him to know," Baldwin said. "You must make him see it for himself. He must somehow be trapped into the reality you want him to submit to and you must achieve a kind of rigorous discipline in order to walk the reader to the guillotine without his knowing it."

Roth, the eager executioner, has certainly walked us to the guillotine; the entire arc of the novel is one long death march. But we are mere spectators, strangers gathered at a public execution. The guillotine's blade, which Baldwin meant to fall on the reader, in this case falls on the character. Yet we've learned very little worth knowing of the condemned man, except that his crime was to be born human. We're supposed to be mortified by the spectacle of his bodily undoing, but there was never even a moment of surprise, since he was buried in the opening scene. Roth seems to hope that by unremittingly exploring the fragility of the human body, we will feel the cut of the guillotine's blade too. It's as if Roth has cooked up a fictional equivalent to the show trials of the last century: a novel that serves, as much as anything, as a warning to the rest of us.