This animated tale from Disney/Pixar is sleek and shiny, but is it anything to get revved up about? 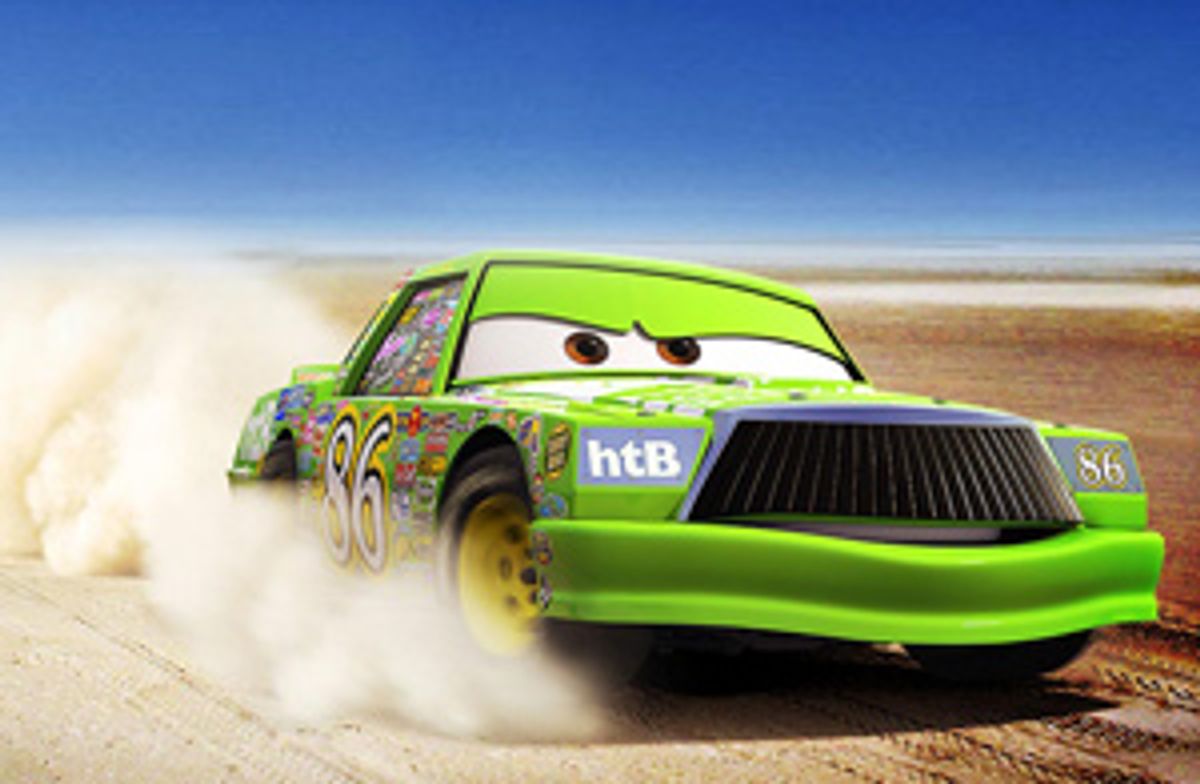 Automobiles, as people who love to drive them or even just ride in them know, have personalities, and kids understand that, too: Although I played with Barbie dolls as a child, I went through a stage where I much preferred Hot Wheels. No one needed to explain to me why the purple hot rod with the flame decals on the side was a very different creature from the laid-back chartreuse beachmobile. Each Hot Wheels car had character -- but not too much character. Hot Wheels represented a welcome liberation from feeling: There was no Barbie angst about what to wear for a big date, or fretting over whether Francie might steal Ken, or anxiety over the fact that the Dream House had been turned into a shambles by a wild housekitty. Hot Wheels were all about the exhilaration of speed and freedom. And the crash-ups were awesome.

We may love our cars. But do we really want them to have feelings? Do we want to live in a universe, even just a two-hour one created for us by Disney/Pixar, where cars get the hots for vehicles of the opposite sex? Where they feel bad when they don't win a race? Where they have googly eyes and little tongues that poke out of the front of their grillwork?

That's the leap we're expected to take with "Cars," the first picture to be released under the new Disney/Pixar umbrella. This is the story of little red stock car Lightning McQueen (voiced by Owen Wilson), who, in the movie's exhaustingly frenetic opening sequence, fails to win a crucial race. Then a pileup of mishaps gets him stranded in the sleepy Route 66 town of Radiator Springs -- which used to be a vibrant, neon-lined strip, until the Interstate passed it by -- where he's kept against his will by the local townsfolk, who, like McQueen, aren't just cars but beings fully loaded with thoughts, feelings, hopes and desires. There's Mater (Larry the Cable Guy), the dimwitted, decrepit tow truck; Sally Carrera (Bonnie Hunt), the sleek Porsche who also happens to be the town lawyer; and elder statesmen Doc Hudson (Paul Newman), a 1951 Hudson Hornet with a stash of shattered dreams under his hood. McQueen will learn many cozy, homespun lessons in Radiator Springs, most notably that the journey is more important than the destination, and that prestige and riches aren't what's important in life.

In the past Pixar has made a go at allowing us to feel something for monsters, bugs and stuffed pigs. You could almost forgive "Cars" director John Lasseter for thinking he could do the same with hard, shiny machines: As director of "Toy Story," "Toy Story 2" and "A Bug's Life" (and as executive producer of other hit Pixar features), Lasseter more than anyone should have his fingers on the Pixar pulse.

But "Cars" feels as if it were made by a bunch of guys who first got high on the novelty of their concept ("Hey! Talking cars! With guest voices like Mario Andretti, and Tom and Ray Magliozzi, the NPR 'Car Talk' guys!") and then proceeded to draw a variety of four-wheeled vehicles with cute expressions. Other elements in the formula include a script with frequent pileups of hip, knowing dialogue.

Pixar features are always technologically elaborate, and "Cars" is no exception: We're invited to bask in the glow of the vehicles' glossy enamel flanks, and to marvel at the way these cars sometimes appear to be headed right for us. Just looking at the screen is a constant reminder of how much sweat went into the damn thing, and accordingly, we're supposed to respond with unreserved rapture.

But wait. Maybe we dont want to hear Paul Newman's voice coming out of a car -- not even a vintage beauty like this one. Maybe we don't really care if McQueen and Sally zip off into the sunset together. And even beyond that, some of the allegedly rich "themes" of "Cars" are suspect. The picture is openly and understandably nostalgic for the glory of Route 66, a ribbon of road that connects and unifies us as a country, winding through our landscape's contours instead of ruthlessly cutting across them. (Michael Wallis, the author of a book on the subject, "Route 66: The Mother Road," even supplies the voice of the Radiator Springs sheriff.) The picture sighs deeply over the memory of the days when people would gas up and head out for an old-fashioned pleasure trip, enjoying the scenery instead of just zipping out for a Starbucks or Wal-Mart run.

That's an admirable enough notion: If we're going to be a nation of gas guzzlers, we should at least be able to enjoy the ride. But I wonder if anyone else will cringe at the idea, which "Cars" embroiders heavily, like a high-tech sampler, that calm, quiet, small-town life is inherently better than nutso city life; in the world of "Cars," small-towners, bless their little engines, are less sophisticated than city folk, but they're also nicer and more honest. And they have dreams too, doggone it.

Route 66 itself has no notion of red state-blue state divisions, but "Cars" apparently does, and its homey, condescending speechifying becomes tiring long before the final lap. ("Cars" clocks in at an unwieldy 116 minutes.) Of course, Pixar had a long partnership with Disney before the former ruler of the animation empire acquired it, last January. And, of course, "Cars" has been in the works since long before that deal took place. Disney now needs all the talent and technology that Pixar has to offer, and "Cars," with its comforting little lessons and snazzy surface, seems to be delivering everything that Disney could want.

Maybe audiences will want it too. But I can't help comparing "Cars" with the last Pixar feature, Brad Bird's superb "The Incredibles," a feat of animation whose depth of field was both literal and figurative. Bird wrote for his characters, a family of suburban superheroes, the same way any screenwriter would write for real-life actors -- the gags emerged from those characters casually and believably, instead of being tacked on to give them character. "The Incredibles" understood that the brilliance of Pixar animation (as beautiful as that animation often is) can't be an end in itself. And no matter what, the characters, and a sense of their community (whether it's a toy box or a quiet suburban street), have to come first. "Cars" is an elaborate concoction all right. But it feels soldered together from a scrap heap of tired ideas. And while a talking, feeling, thinking car could conceivably be just as endearing as an anthropomorphized cowboy doll, none of the characters in "Cars" feel like flesh and blood. None of them feel like family. Instead, they're just a means to an end -- vehicles and nothing more.