A veil of uncertainty

While some Arab women embrace the rise of Islamist political parties, others fear they could end up groaning under Taliban-like regimes. 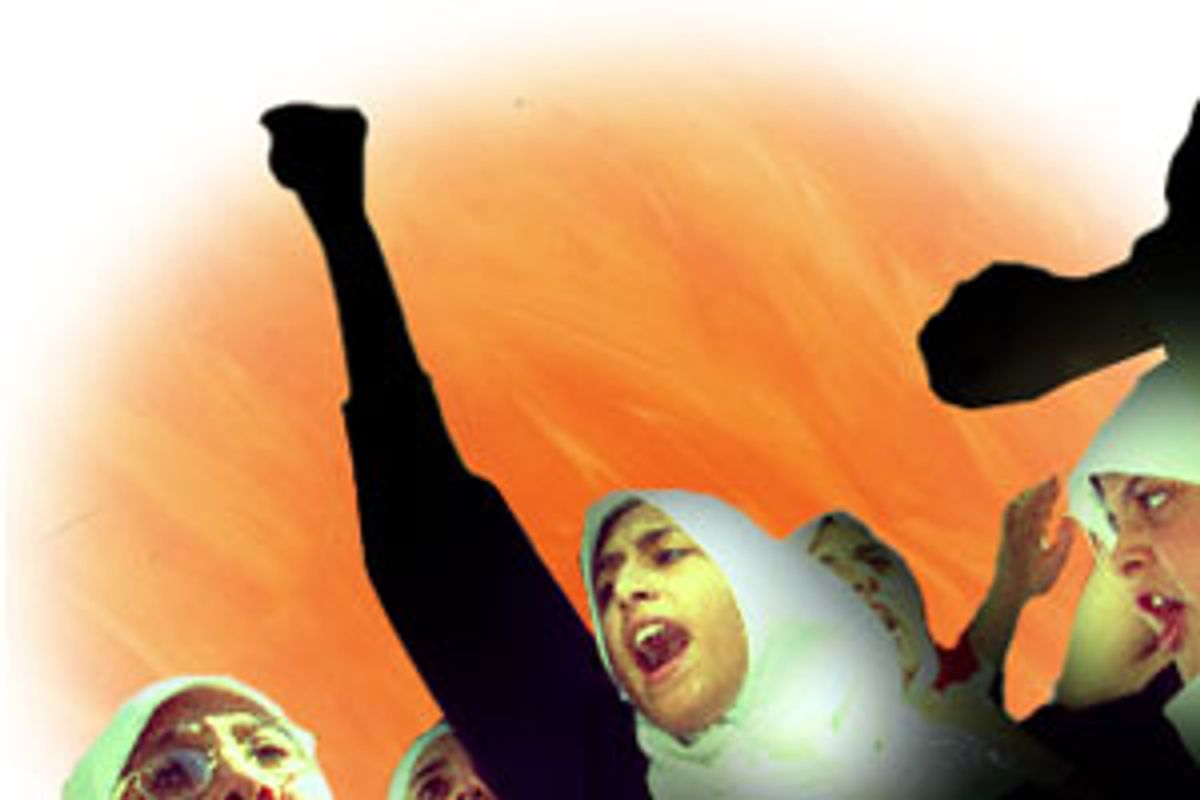 The stunned reactions in the West to the victory of Hamas, an Islamist movement that officially refuses to recognize Israel, in the January 2006 Palestinian elections largely overlooked a key issue: that these elections represented a political breakthrough for Arab women. Often shut out of corrupt or ossified secular parties, women now find themselves playing a more prominent political role. Under a quota system in the Palestinian elections, women had to comprise 20 percent of the candidates of both Fatah and Hamas. And the backbone of Hamas' support is its social service agencies, which are dominated by women. As Helena Cobban reported in Salon, one of the reasons Hamas won was that many wives voted for Hamas, even if their husbands voted for Fatah.

But the increasing political power of Islamist, as opposed to secular, parties throughout the Middle East -- not just in Gaza and the West Bank but also in countries like Egypt and Jordan -- also alarms many Muslim women. They fear that newly elected Islamists could impose sharia law, curbing women's freedom and independence. Under sharia, for example, marriage and divorce laws are harsher for women than for men.

Yet some also believe that, paradoxically, Islamism may in fact be a prerequisite in the transition from authoritarian regimes to democratic ones.

Islamists have engaged women in their political rise in distinct ways in different countries. Hamas did better among women voters than among men; seven women in that party won electoral seats, including the mother of a suicide bomber. In Bethlehem, a Fatah stronghold, Palestinian women in their early 30s went door to door just prior to the election, signing up women for classes in politics and elections.

In Egypt, women have long been part of the Muslim Brotherhood, an organization that has inspired other Islamist groups, including Hamas, to bring more women into the political process. Twice banned in Egypt, the Muslim Brotherhood was persecuted by former President Nasser, tolerated by former President Sadat and repressed by President Mubarak. Since the 1980s the party has espoused nonviolence, political pluralism and parliamentary democracy. The Brotherhood's network of health, education and welfare programs enabled it to mobilize the participation of women alongside men in the November and December 2005 elections and win 20 percent of the parliamentary seats.

"After spending years in prison and making lots of sacrifices, the Muslim Brotherhood now deserves to be given a chance," says Amany Abou Fadl, a lecturer in English literature at Cairo University and a longtime supporter of the Islamist organization. Fadl says "political representation for women [in Egypt] is a big problem, but it is hard to address these issues with people who don't have money. For the average Egyptian woman, politics is a luxury." She says she is focused on getting the current regime to recognize the Muslim Brotherhood as a legitimate political party; in last winter's legislative elections, members had to run as independents to get around the government's ban on religious-based parties.

The Brotherhood's "five-year plan" includes a women's agenda, says Fadl, simultaneously asserting that women should not be given preferential treatment over men because "men and women are equal [in Islam], they are equal as [Egyptian] citizens, and they both suffer poverty, so why feminize poverty and treat women like cripples? We are not crippled."

Other Egyptian women are more skeptical about the Brotherhood's sincerity when it comes to women. Nadia El Awady, deputy editor of Islam Online, who chooses to wear the abaya, a full cloak, has serious reservations about how much power the Muslim Brotherhood will really give them. "When women in the Muslim Brotherhood are decision makers, at what level are they decision makers? What kind of role would they play? Would they have a real voice and real opinions? Or would they be puppets of the Muslim Brotherhood? I don't know." Awady is not as concerned about the possible loss of freedoms for women under an Islamist government because she does not believe it would strictly enforce repressive laws against women.

Aida Eltorie, in contrast, a 22-year-old student who works at a modern art gallery in Cairo, fears increasing extremism and its impact on Egyptian women: "I'm a Muslim girl with my hair showing. I'm not meant to openly announce that I'm Muslim ... or wear a veil just to say that I am Muslim. I am to be a Muslim from the heart ... Hair being shown ... should not be a trigger for anyone to enforce themselves on you."

In Jordan, widely considered to be the most moderate Arab nation, Islamists have been represented in Parliament for the past 16 years, and women there seem relatively less anxious about the growing strength of Islamist parties. Shadi Hamid, who was a Fulbright fellow in Amman, says that over time, the Islamists -- the only part to include female parliamentarians -- have become less idealistic and more pragmatic, with a more pluralistic, democratic vision overriding the importance of implementing sharia law. One Muslim Brotherhood hard-liner, elected to the Jordanian Parliament, Sheikh Abdul Monem Abu Zant, was initially eager to impose a ban on alcohol, but finally said, "If the majority doesn't agree, then let it be, but I will have done my duty as a Muslim in trying to introduce such laws ... Islam is democratic, therefore nothing can or will be enforced." Hamid also notes that Islamists' political language has evolved to include women's issues and democracy in the party's platform.

Nuha Ma'ayta, a former member of Jordan's Parliament, says the Islamist party made a "strategically effective decision" that resulted in incorporating several women in its legislative caucus, a step other parties have not taken. This, she says, has brought smart and highly educated women into the inner circle of the Islamist party. Yet, she adds, the Islamists "don't give women rights. They have their own agenda and ideology."

While the recent victories of the Muslim Brotherhood in Egypt and Hamas in the West Bank and Gaza have emboldened Jordanian Islamists, who are setting their sights on council elections this year and parliamentary elections next year, Jordanian women appear unthreatened by the prospect. Unlike most of the Arab women I met, three women I spoke to in Amman -- Shakila (who asked that her real name not be used), 25, a lawyer; Laila Naim, 57, an author and professor of comparative literature; and Salwa Aldiqs, 37, the owner of a beauty salon -- do not seem concerned about their rights and freedoms being abridged by the growing strength of Islamists. They point out that Jordan's democracy affords women many rights, college educations and a strong economy with career opportunities. Nevertheless, college-educated women are often expected to quit working after marriage and stay at home to raise their children. And while the women I spoke with seemed unperturbed about the possible imposition of sharia law, believing Islamists' primary focus is democratic expansion, the reality is that eventual religious restrictions under sharia law could impact marriage and divorce for Jordanian women.

Yet with images of Afghanistan's repressive Taliban regime still fresh in their minds, many Muslim women in other countries in the region are understandably concerned about the impact of parties like Hamas and the Muslim Brotherhood on women's rights. Will Islamists enforce the headscarf for women because women's hair is considered sexually provocative? Will Islamists segregate classrooms in universities, as they have already done at Al-Azhar University in Gaza? Will music be curtailed at weddings? Naima Sheikh Ali, a Fatah legislator, says she's concerned that Hamas' strict interpretation of Islamic law could bar women from becoming judges. In response to such worries, supporters of Hamas say the party will focus on providing water, electricity and jobs rather than act as morality police.

Not surprisingly, many women in this region are more deeply troubled by the violence associated with the politics of all ideologies -- from the Hamas-supported suicide bombings and counterstrikes by Israel to the bombings in Jordan by al-Qaida -- than they are by the potential threat of sharia law.

New voices of moderation are emerging, some distinctly feminine. The Palestinian Authority's outgoing minister of state for Jerusalem, Hind Khoury, a Christian, proposed a different approach in a speech at a conference in Bethlehem in December 2005: "We need non-violence because it is women who have to pick up the pieces when families are destroyed. We [women] understand politics in a different way." Indeed, many observers, both Muslim and non-Muslim, suggest that the rise of a nonviolent Islamism is a necessary step in the transition to democratic government, and that when sectarian opposition parties are banned in places like Egypt and Syria, mosques can help open the door to democracy by allowing space for civil society to develop.

What's more, as John Walsh, senior editor of the Harvard International Review, has written, it is important to distinguish between moderate Islamists and radical Islamists. While Hamas resolutely rejects the nonviolent path, other Islamist parties, such as the Muslim Brotherhood in Egypt and the Islamic Action Front in Jordan, denounce violence. And some countries' Islamist parties have a better track record than the respective secular governments in delivering what their citizens need. For instance, the Muslim Brotherhood has provided health, education, welfare and emergency services to Egyptians during earthquakes, while the Egyptian government has "failed to deliver meaningful economic relief to ... the poor, remains undemocratic, and uses violence in an arbitrary fashion," Walsh says.

Yet even as political opportunities open up for women in Islamist parties, they can be impeded by the actions of existing regimes -- or even by women's own fears of reform. Consider what occurred in Egypt's elections last year.

Makarem El Deiry was the only female candidate from the Muslim Brotherhood who ran for a legislative seat. When she won, her victory was quashed by a judge, who ruled in her opponent's favor apparently on the instructions of the regime. But that is only half the story. Professor Fadl told me the other half, which has been overlooked by the media. "The Brotherhood pushed 25 women to run for office, and they pushed us hard. All except one refused to run because we did not want to take the chance of being imprisoned and sexually harassed as all opposition candidates risk ... Which Muslim woman will expose herself to that kind of humiliation?"

The rights of Arab women, the future of nonviolence and the demand for democratic openings in the region are knotted together in the debate over the participation of Hamas and other Islamist parties in Arab governments. Women will play a major role in unraveling this snarl -- but it's far from clear today how their perspectives will be reflected in the new politics of the Arab world.