Michigan's Rainbow Farm was a utopia for stoners, gays and dissenters. Then America's anti-drug insanity erupted in its ugliest form. 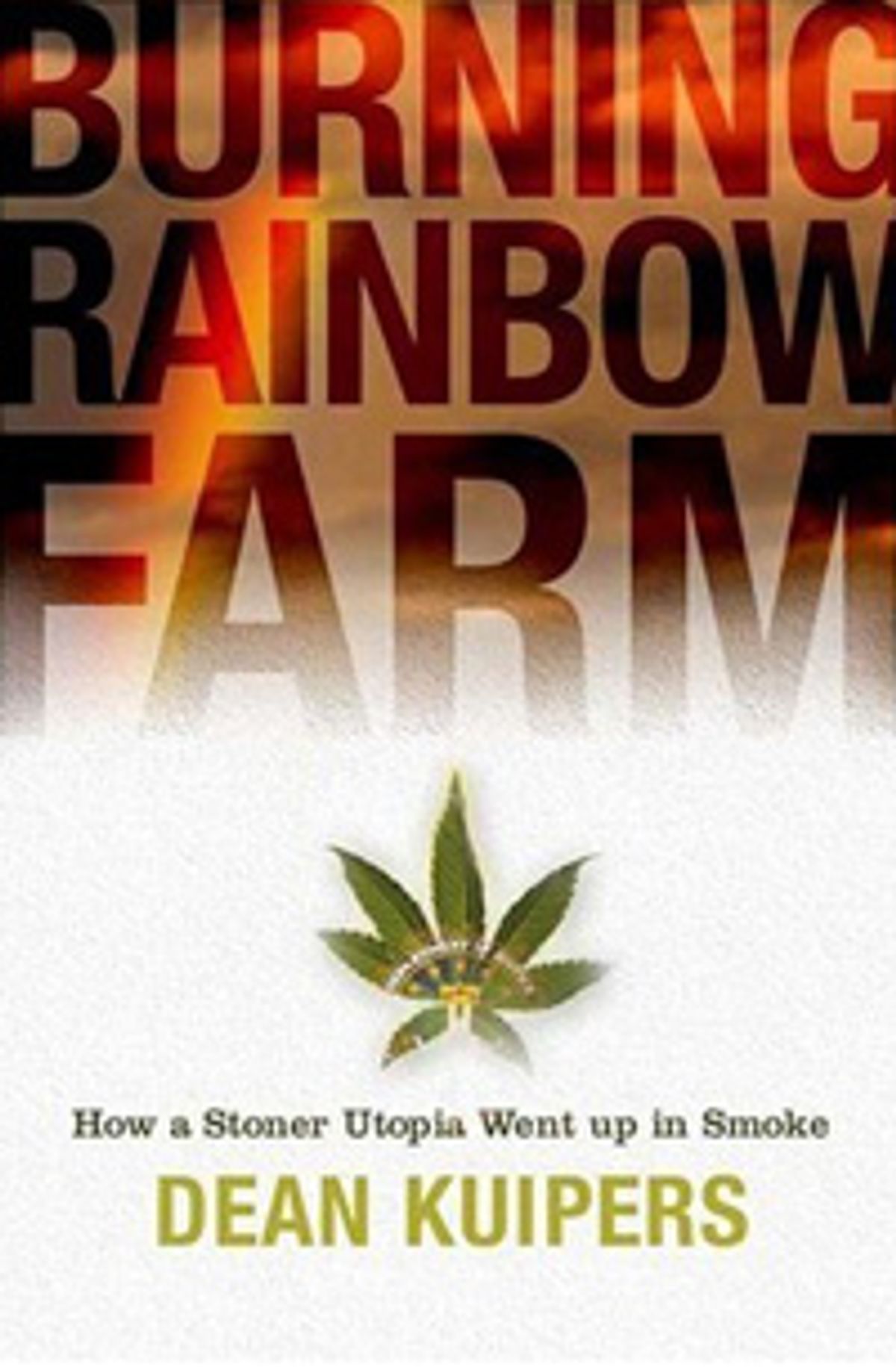 During those rare moments I find myself feeling uneasy about the course of the war on terror, I take consolation by looking back at America's unconditional victories in our two previous crusades against abstractions -- the war on poverty and the war on drugs. As far as poverty goes, it seems incredible now to think that there was ever a time when Americans had to worry about health insurance, affordable housing or quality education. No wonder we're deconstructing safety nets faster than a bankrupt circus.

As for drugs, that victory has been even more decisive. Ever since Richard Nixon ordered an "all-out war, on all fronts" against narcotics over a 1972 Oval Office cocktail with H.R. Haldeman, the drug menace has been swept from the land. One need only look at the millions of POWs we have taken in daring raids on such hotbeds of enemy activity as Detroit, East St. Louis, Ill., and Newark, N.J. Or the 10-year prison sentence handed down to enemy propagandist (and MC5 manager) John Sinclair for selling not one, but two joints. Or the imprisonment of comedian Tommy Chong for engraving his countenance on glass bongs -- a man who, as his prosecutor pointed out in her closing arguments, "was a bad example because he made fun of drugs and cops in his movies." You'd have to be smoking something to worry that a government that conducted these campaigns will falter in securing us from Islamic terrorists.

OK, seriously -- do people actually believe in the war on drugs anymore? Did they ever? If so, I suggest they read Dean Kuipers' "Burning Rainbow Farm: How a Stoner Utopia Went up in Smoke," which captures the paranoid absurdity of our current drug laws as well as does any book in recent memory. This well-researched, compassionately written study of the 2001 killings of pot activist Tom Crosslin and his lover, Rollie Rohm, by FBI and police snipers on their Michigan farm is a memorable portrait of the war on drugs at its ugliest. It is also a timely reminder of the dangers inherent in ceding our basic civil rights to combat a nebulous menace.

By the time of the deaths of Tom and Rollie, Rainbow Farm had become a popular outpost for the pro-legalization movement in America, listed by High Times magazine as "fourteenth on the list of twenty-five Top Stoner Travel Spots in the world." Scene of regular festivals with names such as Roach Roast, Hemp Aid and WHEE (World Hemp Expo Extravaganza), it provided refuge to citizens of the nation's floating pot underworld, who would simply arrive with a tent and some weed to stay for as long as necessary. There were few rules, though hard drugs were not allowed, and no one was permitted to sell dope of any sort, including marijuana, on the premises. Sharing pot, on the other hand, was definitely encouraged. Guns were forbidden and cops might be allowed in every now and then to keep the place from being raided, though they were followed by drummers to alert partyers. Rainbow Farm was, in other words, a sort of stoner utopia, a mini-Woodstock where the rules of the straight world did not pertain.

At first glance, Tom was an improbable Prospero for this enchanted isle in the farm country of southwest Michigan. Born in working-class Indiana, he practiced a rough-and-ready brand of libertarianism that had a lot more to do with good old boy hell-raising than with allegiance to radical politics. "Tom was making revolution, but not with the political design that was then driving the radical left," writes Kuipers. "He was just against hassle. He was really like a Goldwater conservative: against government intrusion into the private lives of Americans and laws governing drugs and helmets and sodomy and guns." In other words, he liked bikes, bar brawls and getting high. He also liked men, which often made for an uneasy fit in his blue-collar world, especially when he started a construction business that forced him to deal with people who didn't have much truck with the gay life.

Two things changed Tom forever. First was meeting Rollie, a shy, handsome young man who'd just emerged from a mistaken marriage that had produced a son. It was love at first sight, especially for Tom, who soon took Rollie under his wing, where he would remain until FBI marksmen separated them forever. The second transformative event was Tom's purchase of 34 acres of beautiful land that he soon dubbed Rainbow Farm, not to denote any sort of gay political agenda -- Tom was never much for that -- but rather to signify his and Rollie's belief in the inclusive, tolerant microsociety they planned to build on their small patch of the upper Midwest. It would be "a new world, an entire universe, that could contain them all -- his friends, his family, the people he loved -- and anyone else who felt like he did -- the freaks and hairies, the ex-cons, dissenters and one-percenters, the dishonorable discharges, closeted gays, potheads and hippies." The farm had no specific agenda other than to become a laid-back Emersonian arena of self-discovery. "This is a place about alternative lifestyles," Kuipers quotes Tom as often saying. "Being gay is just one of 'em. Smoking pot is just one of 'em. There's a bunch more, and this is a place where people can be free."

For a while, it seemed to work. In the mid- to late '90s, Rainbow Farm functioned more or less according to plan, its main problems being financial -- the festivals tended to cost a lot more than they raked in. Acts such as Chong, Merle Haggard and Big Brother and the Holding Company would perform, along with various luminaries on the legalization circuit, who would deliver speeches about the salubrious effects of marijuana. Frisbees filled the summer sky; the tractors were painted in psychedelic colors; there was a dog named Thai Stick; the hill in the middle of the farm was dubbed Mount This.

Darker elements also descended, Altamont style -- in this case the Michigan Militia, whom Tom hired to work security at some festivals (provided they left their guns at home) and who one night famously managed to chase off a nosy state trooper. This involvement with the militia movement reflected a worldview that stubbornly resisted easy classification. "Tom's position on pot was basically a right-wing critique," writes Kuipers. "He thought drugs should be legal not because the government should provide some kind of utopian experience; he thought drugs should be legal because policing them was unconstitutional." In those post-Waco days, it was reasonable that such a person would form an alliance with the anti-government militia so active in his state. As Kuipers points out, the "hemp movement meshed perfectly with the work of the patriot and militia movements, despite the apparent clash of values over guns."

It wasn't long before these strange bedfellows drew the critical attention of the Man. Tom's Inspector Javert proved to be a buttoned-down local prosecutor named Scott Teter, whose aversion to a bunch of countercultural types minding their own business on private property blossomed into an obsessive desire to nail Tom at all costs. Tom's arguments that no hard drugs were allowed on the property, and that the sale of narcotics was forbidden, fell on deaf ears. Teter, after all, represented a system that insanely sees pot as the equivalent of crack cocaine but finds rotgut vodka and cigarettes perfectly acceptable. After a few years of unsuccessfully trying to gather evidence using undercover cops, the prosecutor decided to stage a bogus tax raid whose sketchy justification would make even Alberto Gonzales blush (OK, maybe not). Led by the state police's South West Enforcement Team, or SWET, the raiders found Tom's paperwork to be perfectly in order, though they also stumbled upon a few racks of hydroponic pot in the basement. Not only were Tom and Rollie arrested on felony manufacture charges, but Rollie's beloved son, Robert, was taken into foster care.

Neither of these results, however, met the real goal of Teter's campaign. What he really wanted was to get his hands on Rainbow Farm itself under the broad asset forfeiture laws brought in by Ronald Reagan, whose Omnibus Crime Bill of 1984 basically said that law enforcement agencies could keep the money from the sale of any assets they seized during drug raids. The suspect did not even have to be guilty -- and in most cases in which he or she was proved innocent, the procedure for getting back seized property was so onerous that many simply gave up. According to Kuipers, Michigan was among the worst practitioners of this unconstitutional obscenity, nicknamed "collars for dollars." "Michigan's prosecutors and local fuzz aggressively pushed the logic of asset seizure all the way out to the limits of constitutionality and then beyond, out into a cop fantasyland where even thought-crime might cost you your life's honest work." The moment Teter's men found those budding plants in Tom's basement, Prospero stood to lose the paradise he'd sweated over for the past decade.

Unfortunately for everyone, Tom was not one to take such an affront lying down. The militia man emerged from the stoner's warm haze. Having lost his Fourth Amendment protection against illegal search and seizure, he decided to exercise his Second Amendment right to bear arms, getting his hands on some assault rifles and letting it be known that the farm had been mined and booby-trapped. (It was not.) That now-familiar American danse macabre, the barricade standoff, developed. Believing they were outgunned, the local authorities called in the FBI. Kuipers details the inevitable conflagration with chilling matter-of-factness. Any outrage a nation might have felt over the killing of two gay stoners was buried by the events of 9/11, which happened within a week of the raid.

Although it will be hard for any reader not to feel the injustice and sheer waste of these deaths, it is also difficult to direct all of one's outrage at the cops on the ground. Feeling besieged and friendless, Tom and Rollie had clearly decided to make some sort of desperate last stand. They were, after all, armed with semiautomatic weapons. What's more, after burning down many of the farm's structures, they had fired several times at the police, striking both a helicopter and an armored vehicle. Tom's blustering threats of larger weaponry must have also played in the minds of the foot soldiers who found themselves on what seemed like foreign soil a hundred miles east of Chicago. The blame, rather, lies with the prosecutors who hounded Tom and the lawmakers who have decided to wage war against a naturally occurring weed. Their persecution of Tom caused him to "become a dreadful enemy: a loving, well-intentioned man who had looked into the heart of the law and found himself erased."

In 1967, London Times editor William Rees-Mogg famously quoted Alexander Pope in an editorial on the looming imprisonment of the Rolling Stones' Mick Jagger and Keith Richards for simple possession: "Who breaks a butterfly on a wheel?" In the case of Tom and Rollie, the butterflies were not only broken but nuked, steamrollered and buried a mile beneath the earth. Drug war ideologues argue that one of the reasons smoking pot is bad for you is that it makes you paranoid. Having read "Burning Rainbow Farm," you realize that it is not the pot that makes people freak out but rather our government's insane campaign against it.