All unquiet on the eastern front

With Afghans enraged by a worsening security situation and the West's failure to improve their lives, Afghanistan is in danger of falling back into violent chaos. 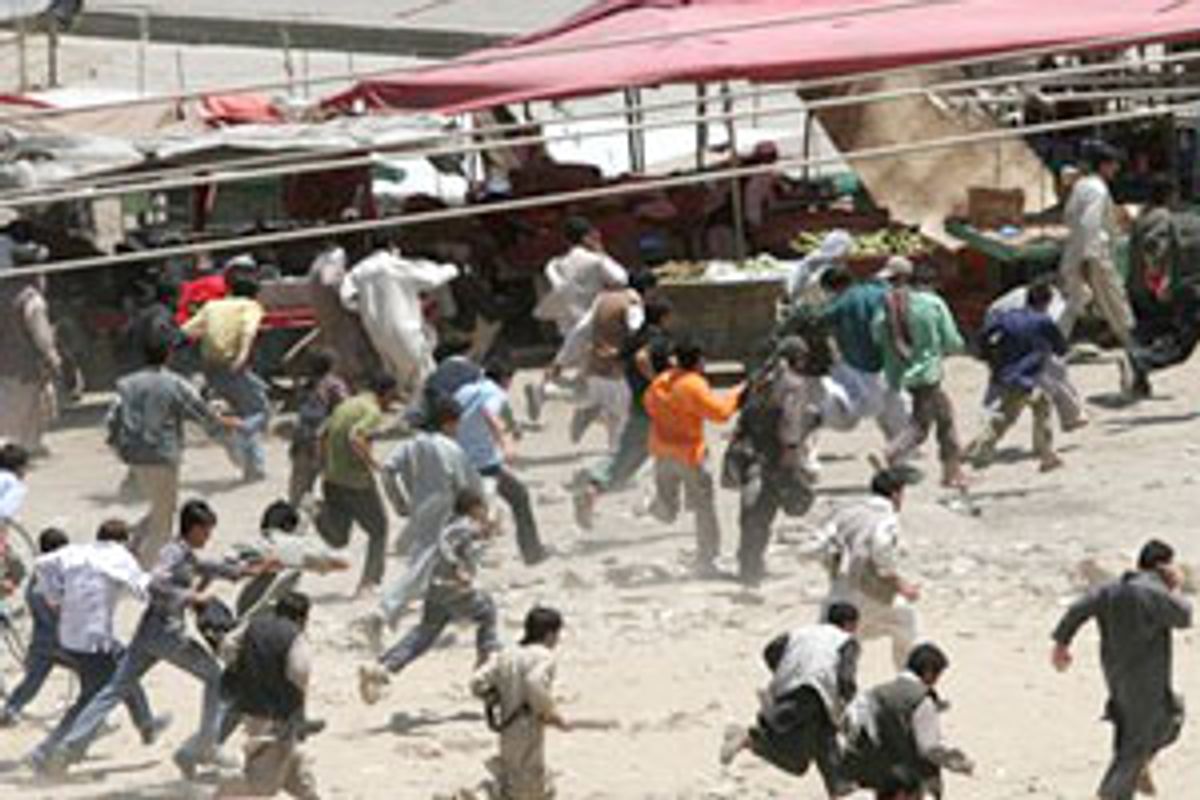 It was an accident. And when the large U.S. Army truck careened out of control just outside Kabul and killed several civilians -- it's still unclear how many -- that's what the military called it.

But the Afghan people at the scene two weeks ago didn't see an accident, according to witnesses and local media reports. They saw irresponsible behavior by an occupying army that had no respect for Afghan lives. Rumors spread that it was intentional. They began pelting the convoy with large rocks and whatever else was available in the dusty bazaar near the scene of the incident.

The rest of the details are murky. Afghan witnesses claim the U.S. soldiers opened fire on the crowd and killed half a dozen or more people. Other reports claim it was the Afghan police and Afghan National Army that did the firing into the crowd. But it doesn't matter, because within one hour, large crowds of angry Afghan youth -- reportedly egged on by various enemies of U.S.-backed President Hamid Karzai -- rampaged through Kabul, looting shops, attacking Western-affiliated companies and aid agencies and attempting to ransack nice hotels frequented by Westerners.

The riots went on for more than seven hours. Armed gangs of looters destroyed humanitarian compounds and laid siege to the Interior Ministry itself. The much-touted Afghan security forces were ineffectual, and the 9,000 NATO peacekeeping troops in Kabul never left their compounds. Scores of people were killed. The official total is 17 dead but literally no one believes that. Eyewitnesses said there were more than 10 killed in front of one mobile phone company compound, whose security detail of former British Special Forces men refused to abandon their building and opened fire, eventually winning a four-hour gun battle against the looters. Informed Afghan security sources put the total dead at close to 100 people.

It was the worst single day of violence in Kabul since the fall of the Taliban regime over four years ago, and it revealed how fragile the tolerance for the American, NATO and international community presence in Afghanistan actually is for the people of this impoverished, violence-plagued and deeply divided country.

Violence in Afghanistan has recently spiked, mainly in the south, as the remnants of the Taliban have been increasingly successful in their insurgency. In the past three weeks, the country has seen some of the worst fighting since the fall of the Taliban. Since May, more than 500 people have been killed, many of them suspected insurgents. U.S. Ambassador Ronald Neumann blamed much of the violence on drug mafias fighting the Kabul government's U.S.-backed opium eradication campaign. The situation has grown so grave that Karzai has taken the risky step of using tribesmen in the south to fight the Taliban.

But the rioters weren't Taliban or their supporters. The men burning the compound of CARE International, chasing Western journalists while screaming "skin the infidels," were also waving posters of murdered Northern Alliance commander Shah Ahmed Massoud. The rioters were the supporters of the very groups that helped the Americans defeat the Taliban. These are our friends, who fought alongside us in 2001 and 2002 and welcomed the U.S. military as heroic allies.

What happened? Afghans complain it's the same thing that always seems to happen in Afghanistan: The West's failure to deliver on its big promises. Bush's invasion of Iraq diverted badly needed troops, materiel and money from Afghanistan. Now the situation is deteriorating, and the U.S. is stretched too thin to do anything about it.

Mohammed Fahim Dashty, who runs the English language Kabul Weekly newspaper, remains close to his Northern Alliance comrades -- he was Massoud's press aide and lost an eye when two al-Qaida operatives posing as Arab journalists blew themselves up on Sept. 9, 2001, killing Massoud. He says the people of the country have become enraged after seeing too little improvement and too much occupation.

"Four years ago there were big wishes, big hopes for quick changes in their miserable lives for the Afghan people," he says. "But it didn't happen and in some ways it's worse than under the Taliban because day by day the security situation worsens."

Afghans are angry not only with the international community -- the United Nations, the European Union, NATO, non-governmental aid groups, and the huge corporations that provide consultants and experts to the reconstruction effort -- but with the increasingly unpopular Karzai. The president plays politics by exploiting his close ties to the American and international donors who have dumped billions into the country the past four years.

"Whatever the president is doing, he says he has the backing of the international community," Dashty says. "And the people are still poor. They have nothing to eat at lunch and dinner but see their aid money being spent by foreigners in the latest model cars, getting high salaries and living in nice buildings. This is the only visible benefit, seeing these people living well."

Karzai also uses the international community as a scapegoat for his own unpopular policies. Recently, he refused to grant a $6 a month salary increase to Afghanistan's 400,000-plus civil servants. The annual cost of the increase would have been $60 million.

"When asked why he refused this raise, Karzai says to the people, 'Because the donors refused to increase your salary,'" Dashty says, thus fueling the rage on the street toward both the president and the international community.

"When [the Americans] came, the reasons they gave were to help Afghanistan rebuild and reconstruct the economy," he adds. "But is there a real plan to do this? The people don't know."

Dr. Ramazan Bashar Dost, a member of the new Parliament representing Kabul, sits in the same tent in Shar-E-Now Park he campaigned from on an anti-NGO platform. Once elected, he refused the trappings of power, like an office or car, and kept the tent. The former planning minister famously lost his job almost two years ago when he ordered all international NGOs shut down, accusing them of wasting huge amounts of aid money.

A big part of the problem is the collapsing security situation in the south and east of the country, where the ethnic Pashtun regions have seen a rise in the number and boldness of Taliban attacks.

"Two weeks ago in Uruzgan Province, the Taliban took over an entire district and held it for three days," Dost says. "The Afghan people don't understand how Karzai and the power of America and NATO cannot control such a small group like the Taliban.

"You could see it two weeks ago in Kabul," he added. "No police, no soldiers in Kabul. The people targeted hotels, TV and international community symbols because the majority of the Afghan people think they are responsible for the problems."

Dost says the high price of the contractors and NGOs, and their shoddy work, anger the people who remain poor despite hearing about the billions spent to help them. "The problem is that the NGOs work within the system of corruption that plagues Afghanistan," he says. "They pay the bribes to the officials and even to Western contractors. So people see them as part of the same system as the corrupt government. Everyone plays a part in the problem."

On the other side of town, far from the contractor-funded hotels and restaurants that serve alcohol and pork in this strictly Muslim country to aid workers and reconstruction experts, a family mourns their dead son.

Abdul Jamil Molowizad, 18, was not a looter; he was a policeman on his day off when the American truck hit the market where he was buying spare car parts. He ran to the scene only to be struck in the face by a machine gun bullet his family says was definitely fired by panicked American forces.

His father, Abdul Qadim, is not a Taliban or a religious zealot; he's an official in the police department at the Ministry of Interior. A company man to the end, he continues to work alongside the Americans whose troops killed his son. He and his family are Tajiks, and fought against the Taliban.

It's dusk at his home on the outer edges of Kabul and he's really too sad to talk. But his brother Abdul Wahid, a government lawyer, is furious and does most of the talking.

"We see the foreign forces as here for occupation," he says. "People were throwing stones when they saw dead civilians. They knew it was no accident; the Americans just don't care for the Afghan people or Afghan beliefs."

Abdul Wahid and his brother agree that, in Walid's words, the rioting was "people using the situation to take advantage for politics or looting and did much damage to the city." But "the idea of troops being here is not for the Afghans, it is for both Karzai and Bush.

"There has been no improvement in security, no improvement in the economy and a lot of the people who returned to Afghanistan [from abroad] are returning to Pakistan or Iran because the situation is so bad," Abdul Wahid says. "The people are fed up with foreign workers. These aid organizations and the troops they work with are just seen as occupiers now. These people do nothing but make money and create problems for us."

Dashty says that this impatience is not the result of unrealistic expectations by the Afghans about what can be accomplished. As I list the number of problems the country has and that any reconstruction effort faces -- complete lack of infrastructure, an impoverished and illiterate population, disease, no roads and a nasty insurgency to the south and east -- he nods and agrees. "But we are not asking for miracles, only a plan. If the poorest people in Afghanistan -- take Ghowr Province - hear Kabul is improving, they won't expect a good life but they'll have hope. When they hear Kabul is not improved in security or economy from the Taliban they will give up hope, because if you can't improve here..."

According to one Afghan intelligence official so highly placed he won't even meet with me, but insists that questions be posed through a mutual friend, Afghanistan now faces a worst-case scenario no one could even imagine a year ago. In response to the question, "What keeps you awake at night about the current situation?" he answers that Karzai could become so weak that he invites more and more Taliban elements into the government and sparks a civil war with the Tajiks. The other scenario is that devout Tajiks, who would never work with the Taliban, join with Guliban Hekmaytar, the one-time Taliban enemy who has become a fierce opponent of the U.S. occupation. Hekmaytar recently aligned his group, Hizb al-Islami, with his former Taliban foes, and called for a revolt against U.S. forces and Karzai's "puppet government."

Hekmaytar, who led the CIA's most favored group of fighters in the anti-Soviet jihad, has strong ties to both Pashtun and Tajik religious groups. And people are afraid Tajiks who would never join the Taliban will fight alongside him.

These are all rumors. But just one year ago the rumors were a lot less scary, which shows that the situation is deteriorating.

My friend Naqib put it bluntly. "I was going to bring my family from Peshawar [in Pakistan] but now I will not. It's not safe. And you should work here as much as you can because in six months you won't be able to go or do anything here [as a Western journalist]."