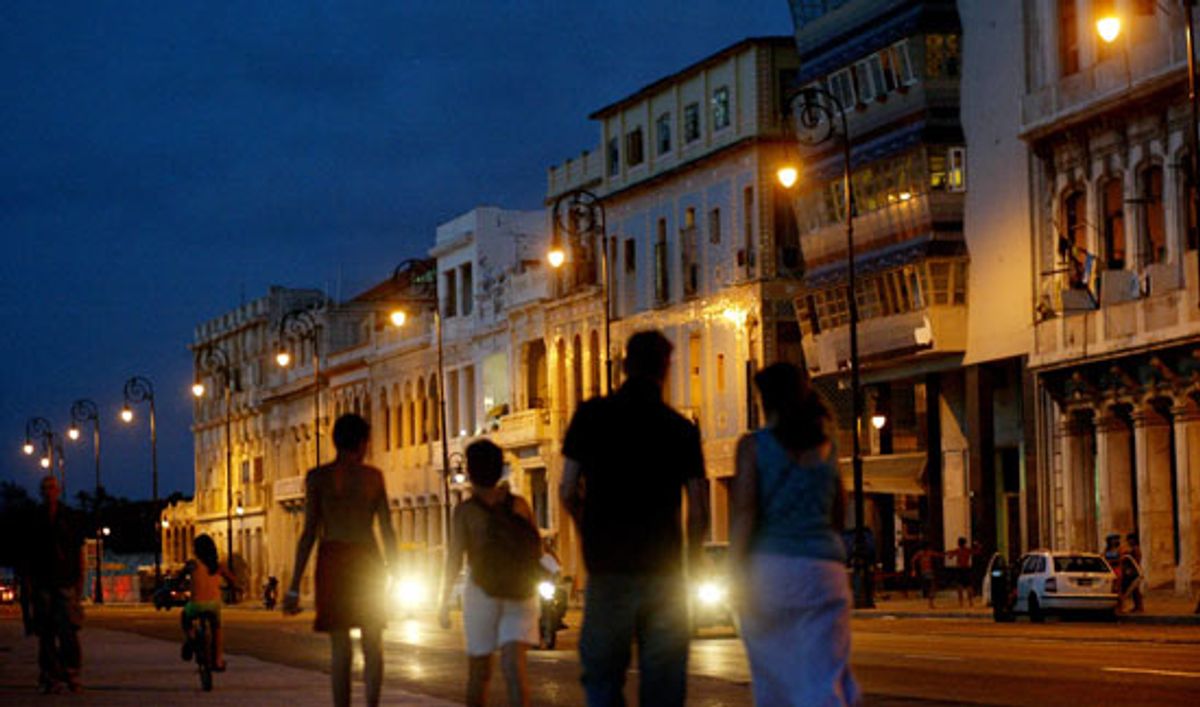 A salty friend who sails the strait twice a year from Key West to the Marina Hemingway had these words before my trip to Havana: "You don't need anything down there but greenbacks, your liver and your cock." From long-legged rumba with tall, black jineteras on the rooftop of the Hotel Inglaterra, to giggling over daiquiris with bronzed mulattas on the warm sands of the Playas del Este, to rum-soaked stumbles along the Malecon with a girl on each arm and the Gulf crashing against that historic stone promenade with what seemed like the full force of American antipathy hurled south from Miami, I found this to be true.

"Three Trapped Tigers," G. Cabrera Infante's 1958 masterpiece, captures Havana as it was, a place of Santeria and frantic drinking, of mystical black women and handsome young men in their best outfits with not much to do under the oppressive shadow of politics. Half a century later, not much has changed. The things the thugs in power on both sides of the strait can't control continue to be the starry Havana nights, the hectic energy of the Habaneras, the rum, and the brassy music that sets everything off once the sun goes down. Infante, who at first embraced the Revolution, but later died in exile, knew that love is possible at every turn in Havana, especially if it's only for one night. This novel, the best the city has ever produced, is an anatomy of the fecund Havana we dream of finding, and if we possess the bravery to go there in these times, we still do.

But of course Habaneros are more than just their parties. Race and struggle define the Cuban soul. Ada Ferrer's "Insurgent Cuba: Race, Nation, and Revolution, 1868-1898" details the essence of the Cuban Revolution from 60 years before it happened. Soon after "discovery" in 1492, Columbus' ruthless enslavement of the indigenous Taíno set the stage for the sugar cane factory that chewed up imported African slaves like a juicing machine, which Cuba quickly became. There's a reason why Castro's Revolution, which at one point was only himself, and as he famously quotes, "one other guy," hiding in the Sierra Maestra, went on to defeat the U.S.-trained and -equipped forces of Batista. Ferrer reveals the secret: Cuba has always been a minority white privileged class and a majority of disenfranchised blacks. Ever wonder why the angry exiles in Miami who influence so much of American policy are all white? Ferrer explains it.

Castro is no hero either, though it's hard to find a Habanera who will admit this in public (just as it's nearly impossible to find a Habanera who won't say that José Martí, Cuba's national poet, is really just a jingoist). Reinaldo Arenas, though, had the bravery to, and he paid the price with decades of police harassment, and a constant ban on his works. The gay boys who look for love in the shadows of Plaza Don Quixote all know his name, and his novel "Farewell to the Sea" tells us why. On display here is a human heart, tender and longing, trapped by a political system that won't let it be what it is, and the strained marriage it forces that heart into. Arenas' own tragic demise reflects the one his narrator can't escape in this poetic requiem.

The folk, however, need their pastimes, and in Roberto Gonzalez Echevarria's "The Pride of Havana: A History of Cuban Baseball," we get at once a detailed and colorful timeline of Havana's preferred sport, as well as a fine description of why the Habanero heart yearns north. Cuba and America desire each other in the schizophrenic way that France and England do. In Havana, the U.S. national sport is played with poetic skill and, more important, followed by old men in wicker hats with a familiar earnestness, pointing to how much the embargo has stolen from all of us. Not to be missed in this vein is Jim Shepard's masterly short story "Batting Against Castro," which is found in his collection of the same title, and uses the cover of béisbol to reveal how the headstrong people of the city can seduce even a hardened gringo.

As the days pass and the initial romance of Havana fades into hangover, worry and repetition, one comes to know Cuba in a deeper way, the way that provokes one to ask, "Why do all these girls give it up for money? Who do they really give their hearts to?" It also helps if one of them steals your wallet. Only the most determined foreigner doesn't begin to see that Cuba isn't a party for everyone. The 31 stories in "The Voice of the Turtle" admit this. This is the broad and definitive collection of modern Habanera voices, and G. Cabrera Infante's title story, of a cagauma turtle on its back that's abused by two dimwitted young men, is a metaphor of a troubled country to rival any story of its kind in the world. Featured here are Octavio Armand, Carlos Montenegro, Lourdes Casal and Lydia Cabrera. The quiet frustration of Alfonso Hernández Catá's "I Sent Quinine" is a particular treat.

Ultimately, the great literary art of modern Havana hides in the alleys of that decayed city like the most fearful of dissenters. Contemporary Habanera writers have no safe outlet and their cautious work reflects that. The exiles have long since lost their claim. What we are left with are the echoes, the memories of those humid and wondrous Havana nights, of the women we met and loved, whom we paid and wrote to, and who of course never wrote back.

Tony D'Souza has contributed stories and essays to The New Yorker, Playboy, Esquire, Tin House, The Literary Review, and many other magazines. His first novel, "Whiteman", was released in April to widespread critical acclaim.

Books Cuba The Literary Guide To The World Travel