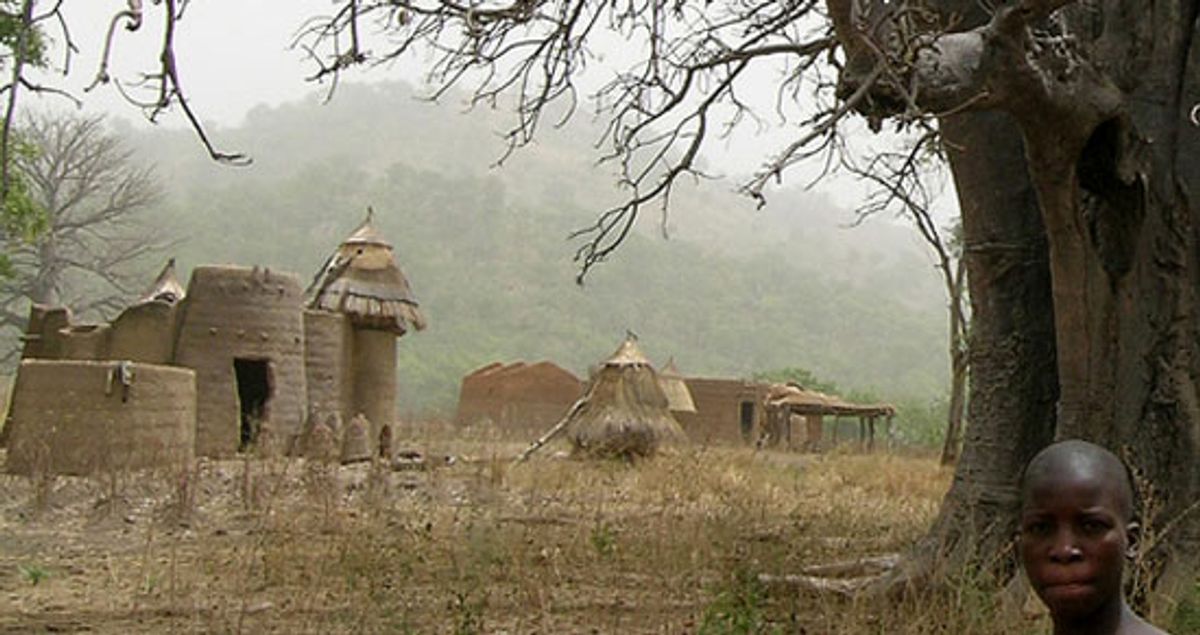 Togo is the Zembla of West Africa: If it did not exist, it would have been invented by the author of an absurdist experimental novel, prompting generations of unwary readers to leaf through their atlases in search of the place. Indeed, some of Togo's own residents may occasionally be tempted to leaf through their atlases, to assure themselves of their own existence. How is one to account for this finger of a country tucked in between Ghana and Benin, its population of 5 million people speaking 40-odd different languages? A country that owes its existence to the off chance of having been the tiniest of Germany's short-lived African colonies, inherited by France after World War I, which absentmindedly failed to consolidate it into its other colonies? Where, until February of 2005, a general who had first seized power in 1967 still reigned, Mobutu-like, over a tribalized kleptocracy, propped up by French money and military advisors, referred to by his countrymen in hushed whispers as "le vieux." Is this place for real?

In fact, Togo does exist; but that didnt stop the great Ivorian novelist Ahmadou Kourouma from inventing it. Kouroumas brilliant 1998 roman à clef, "Waiting for the Vote of the Wild Animals," is a folk-absurdist chronicle of the life of Koyaga, a champion wrestler from a northern hill tribe (as Togo's longtime dictator Eyadéma was) who is recruited into the French army, fights in Vietnam (as Kourouma did), and winds up commanding a clique of disgruntled ex-officers in his country's first coup. He then gradually descends into the familiar dictatorial narrative of gold-plated extravagance and familial intrigue. Koyaga is tutored in the fine arts of torture, repression and opulent state dinners by a panoply of African greats, including Ivory Coast's Houphouët-Boigny, Guineas Sékou Touré, Congo's Mobutu, and the Central African Republic's Bokassa. (They appear in clever guises: "The Man whose Totem is the Crocodile," "The Man whose Totem is the Leopard," and so on.)

The novel follows Koyaga's history through the Cold War years of Western-sponsored corruption, and into the '90s, when the old wrestler finds himself lost in a new world of IMF-mandated structural adjustment programs and exiles returning from Europe demanding transparency and decentralization. But its real genius is stylistic: The narrator, Bingo, is Koyaga's griot, a praise-singing storyteller who recites the leader's history over the course of a six-day, five-night banquet. The language, thick with African idiom and oral tradition, throws the postcolonial political narrative into high relief, like Woody Guthrie reciting the life and times of Richard Nixon.

For a more realistic introduction to Togo, there's the book beloved of every Peace Corps volunteer: "The Village of Waiting" (1988), by George Packer. Packer is best known today for his superb reporting on the Iraq war for the New Yorker, which culminated in the 2005 book "The Assassins' Gate." He was a Peace Corps volunteer in Togo in 1982-83. Stationed as an English teacher in a sluggish village of the Ewe ethnicity called Laviéma (whose name, according to legend, meant "wait a little longer"), Packer found his modest optimism deteriorating into a profound alienation and cynicism over the course of 18 months. His intense friendships with his host family, with the village chief, and with his students were laced with mistrust and incomprehension. Confronted by their poverty, he felt responsible; confronted by their manipulation and dishonesty, he felt simultaneously abused and sympathetic. Ultimately, wracked by hypochondria and anxiety, he quit before his two-year Peace Corps term was up. "The Village of Waiting" is one of the most wrenchingly honest books ever written by a white person about Africa, a bracing antidote to romantic authenticity myths and exotic horror stories alike. Isak Dinesen, Packer notes, wrote of waking in the Kenyan highlands and thinking, "Here I am, where I ought to be." He himself woke up sweating, hungry, "mildly at ease, or mildly anxious. But never where I ought to be."

Tété-Michel Kpomassie didn't feel Togo was where he ought to be, either, though he grew up in a typical family of the Mina ethnicity in the 1940s and '50s, herding goats and picking coconuts on a coastal plantation. When a priestess of the local python god demanded that he be apprenticed to her, he fled the country, setting out for a far land he had become obsessed with since discovering a book about it in a missionary bookshop: Greenland. It took him eight years to work his way up through West Africa and Europe, but he made it, and spent two years living among the Inuit, driving a dog sled and hunting seal in a kayak. "An African in Greenland," his 1981 account of those years, is one of the more original volumes of amateur anthropology ever written, as well as a ripping good travel yarn. And it's a curious meditation on Africa, Europe, the Arctic, and the tenuous and arbitrary ways in which different cultures regard each other as "savage."

No bibliography of Togo would be complete without a guide to some aspect of vodun, the animist religion that thrives from southeastern Ghana to southern Benin, and the ancestor of Haitian voodoo. Judy Rosenthal's 1998 "Possession, Ecstasy, and Law in Ewe Voodoo" focuses on two of the more colorful and fast-growing sects, gorovodun and Tchamba vodun, both of which are tied up in fascinating ways with cultural exchange between Togo's Christian/vodun south and its Muslim north, and with the history of slavery. Rosenthal lived for long stretches in an impoverished fishing village called Dogbeda, and intimately shared the lives of the vodun priestesses, or "horses." She recounts their jealous rivalries, their ever-changing family arrangements, and the splendidly chaotic festivals at which they are possessed and transformed by spirits of varying personalities and sexes. Imagine the early-'90s voguing documentary "Paris Is Burning" recast in a dirt-poor African fishing community, with a certain amount of animal sacrifice thrown in. If that sounds appealing, you will enjoy your time in Togo.

Matt Steinglass writes for the Boston Globe and other publications, and for the children's television show "Arthur." He lives in Hanoi, Vietnam.

Africa Books The Literary Guide To The World Travel