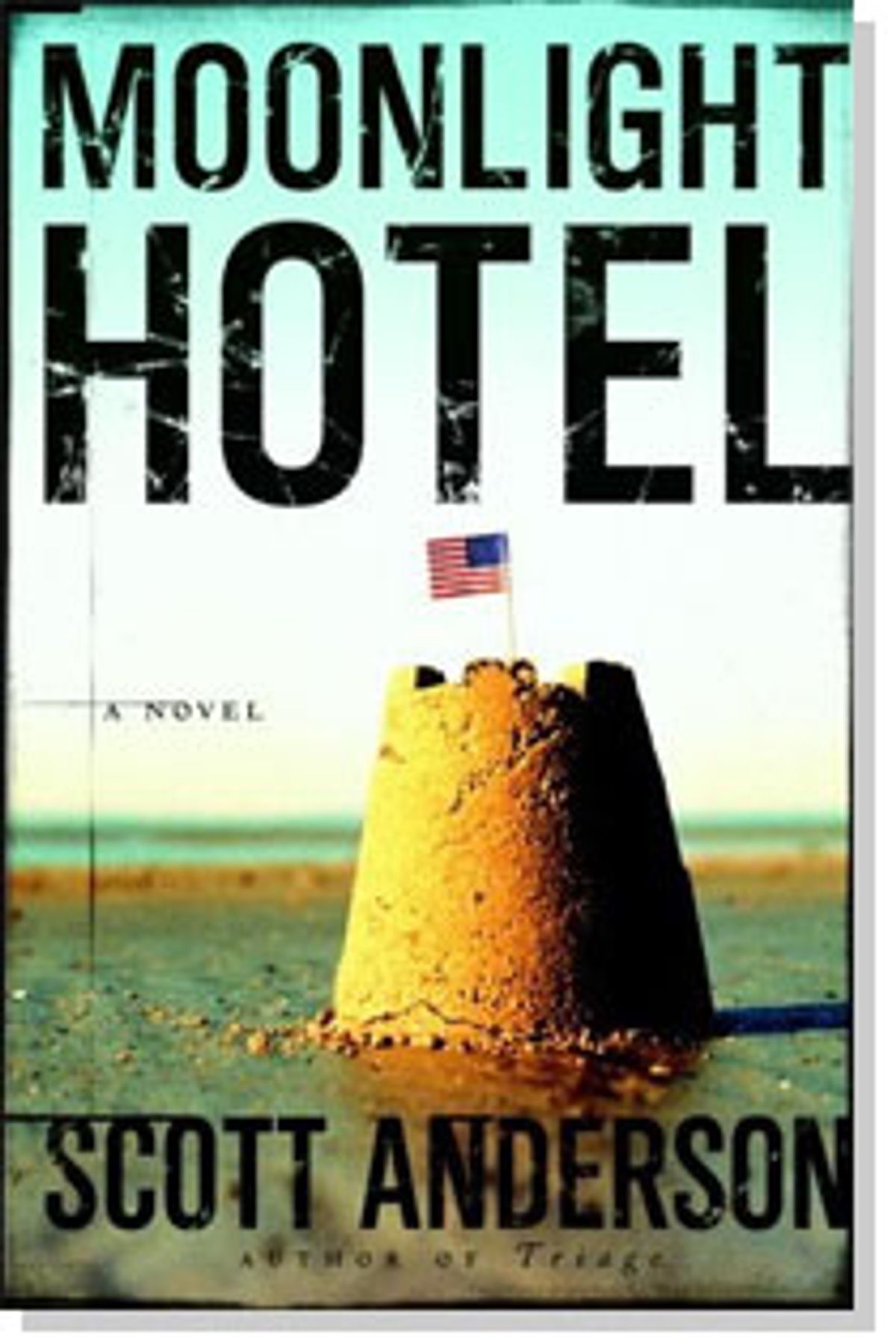 An obscure Middle Eastern backwater, a low-grade border insurgency and a gung-ho American military advisor -- that's the recipe for disaster in Scott Anderson's "Moonlight Hotel." To call this novel a political thriller wouldn't be quite accurate. Its protagonist, David Richards, a midlevel U.S. diplomat overseeing aid programs in the fictional kingdom of Kutar, isn't really an action hero, and most of the time he can't do much to affect the course of events. Instead, "Moonlight Hotel" fascinates by offering the spectacle of American imperial hubris, post-colonial apathy and the eternal laws of power -- formidable gears and levers all -- set into motion by one foolish man, as they grind on toward unforeseeable, yet somehow inevitable, catastrophe.

Anderson has worked as a war correspondent for many prestigious magazines, and early on "Moonlight Hotel" suffers a bit from the usual weakness of foreign reporters' novels, the solemnity with which these journalists approach the chosen form of their great literary role model -- who is, invariably, Graham Greene. It would be nice if "Moonlight Hotel" took David and his uninteresting love life a little less seriously, but Anderson does a very credible job of training a cold, worldly, Greenian eye on the workings of bush league geopolitics. At its best, the novel verges on the blackest satire, but that never keeps it from making you feel the tragedy in Kutar's plight or from caring urgently about what happens next.

Kutar is a nation so small and globally insignificant that in the early 1980s, when the novel is set, most Americans don't know it exists. It's a state cobbled together by the receding British Empire from a relatively cosmopolitan coastal south and a rural mountainous north. There's the occasional skirmish with some independence-minded rebels in the far north, but life is mostly quiet, and diplomats like David spend much of their time at dull cocktail parties and conducting idle adulterous affairs.

Enter Col. Munn, the aforementioned military advisor, who decides it's time to "get ahead of the curve. Get this puppy leashed before it bites someone." This is, of course, exactly the wrong course to pursue, but Munn does an end run around the diplomatic corps and persuades the Kutaran king and generals to launch an offensive. Deliciously hateable and impenetrably stupid, Munn is one of Anderson's best creations, a jargon-spouting, pose-striking incompetent who, once things start to go badly and the TV cameras arrive, becomes a media darling.

And things do go badly, very badly. Munn tosses off references to the military strategy of the Napoleonic Wars, but every last one of his operations fails miserably. The crowning "sub-optimal achievement" of his campaign results in the capital city under siege by the rebel forces, cut off from food and medical supplies. Then the shelling starts (meticulously described in all its horror by Anderson, who's obviously seen his share of the real thing). The rebels remain rather mysterious, but David's boss passes on a confidential intelligence report in which comparisons to the Khmer Rouge get batted around.

Most diplomats and well-off Kutarans are evacuated, leaving only David and a handful of other Westerners holed up amid the faded colonial splendor of the old Moonlight Hotel. It's a classic, cinematic ensemble: a fake countess, an Italian businessman, a cynical American journalist, the beautiful, London-raised daughter of a Kutaran oligarch who finds purpose as a ministering angel at the street hospital. Corny, but enjoyable all the same.

Meanwhile, the fate of Kutar unfolds, full of twists, reversals and intrigues, the rebels inscrutable and always one step ahead of everyone else, the State Department stalling and obfuscating about whether it will do anything to rescue the city, the captives concocting one desperate gambit after another to draw the world's attention to a tiny nation tumbling into barbarism. You'd think the Cold War setting would preclude any obvious contemporary parallels, but not really. "Moonlight Hotel" seems uncannily relevant. That's probably because the folly it describes transcends its context. The world is still full of Col. Munns, and we listen to them at our peril.

Our next pick: George Pelecanos' engrossing crime novel -- perfect for fans of "The Wire" -- tells parallel stories of cops and criminals in Washington, D.C.