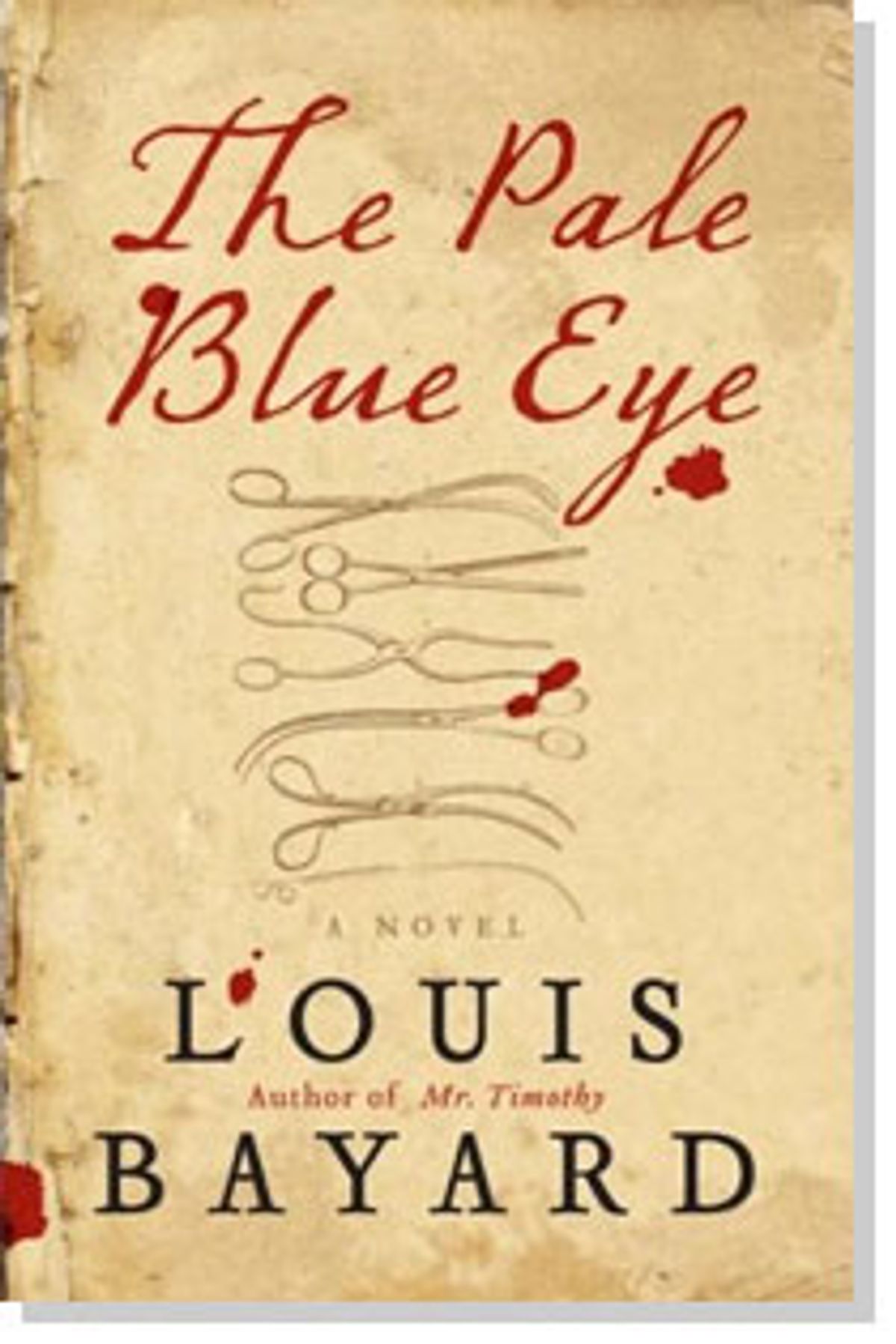 Northeastern America is a creepy place, the countryside choked with sinister, damp, blackish undergrowth, the winters pervasively cold and the light thin and cheerless. No wonder writers from the region -- Stephen King and H.P. Lovecraft come to mind -- take so easily to the dark side. Edgar Allan Poe, though in some ways a Southerner, seems to belong in their company, and in "The Pale Blue Eye," Louis Bayard's novel inspired by Poe's brief stint at West Point in the Hudson River Valley, he puts Poe in just the sort of dank, chilled atmosphere that the writer liked to conjure himself.

The dreamy, unstable and feckless Poe was a poor fit at the military academy (he was eventually court-martialed for neglect of duty), and Bayard makes the most of the contrast. The poet (as Poe considered himself) signs on as the assistant to the novel's narrator, Gus Landor, a lonely, retired police detective, called in to investigate a shocking death at the school. A cadet is found hanging from a tree one gloomy October morning, and then the body disappears overnight, only to turn up behind the ice house, missing its heart. The academy is still a new enterprise, its superintendent keenly sensitive to the institution's many opponents in Washington, D.C., and so Landor is hired to make inquiries of "a highly delicate nature."

"The Pale Blue Eye" is not quite the unalloyed delight of Bayard's first Victorian thriller, "Mr. Timothy" (in part because of its melancholy setting and principal characters), but it's just as gracefully written, from its descriptions of the river, "glassy, opal-gray, crumpling into a million billows," to the author's unostentatious fidelity to the language and mores of the period. There's no shortage of novels that pair a 19th-century setting with the kind of gruesome murders common in modern serial killer novels, but they're usually so clumsy in depicting the period, and so clunkily written, they set my teeth on edge. Bayard's prose flows like silk, weightless but enveloping, and never shows its seams.

The cheesy genre device of turning a historical celebrity into the story's detective would actually be warranted in the case of Poe -- he did, after all, invent the detective story with "The Murders in the Rue Morgue." But Poe was also a chronic gambler and a drunk, with grandiose literary ambitions and a propensity for wildly idealizing women, quite the opposite of his supremely rational creation in that famous tale, C. Auguste Dupin. By putting Landor in charge of the investigation, Bayard frees himself to craft a fond, often funny, but also unvarnished portrait of the real Poe. He's a slightly ridiculous figure, who lies about his past, boasts of his genius, develops an inconvenient infatuation, rashly jeopardizes the investigation, and forces his morose verse upon all and sundry, including the unappreciative Landor.

Some of the best bits of "The Pale Blue Eye" consist of Poe's written reports to Landor, expert parodies of Poe at his most overheated, to great comic effect: "Dinner came -- I lived still. But to what avail? Every energy of mind lay in abeyance: shades of the deepest melancholy darkened my path ... I dreaded lest the insufferable gloom which pervaded my spirit should succeed in swallowing me whole," all because he's not sure when he'll next see a pretty young lady he's just met. Here and there, a word -- "tintinnabulation" applied to a set of sleigh bells -- makes a sly allusion to some future famous work.

Poe's future, of course, was fully as bleak as the West Point winter Bayard depicts, and if anything, Landor might have the young poet slightly beat in the brooding department. I'm not sure I'd want to read this novel during a forbidding New England January, but it's the very thing to temper the midsummer heat.

Our next pick: When you're a cub reporter working the graveyard shift, there's little else to do than become involved in the domestic disputes -- and murders -- of Glasgow's upper class