At 71, the poet and songwriter still cuts deep with his words and elegant presence. But this documentary leaves you wanting more. 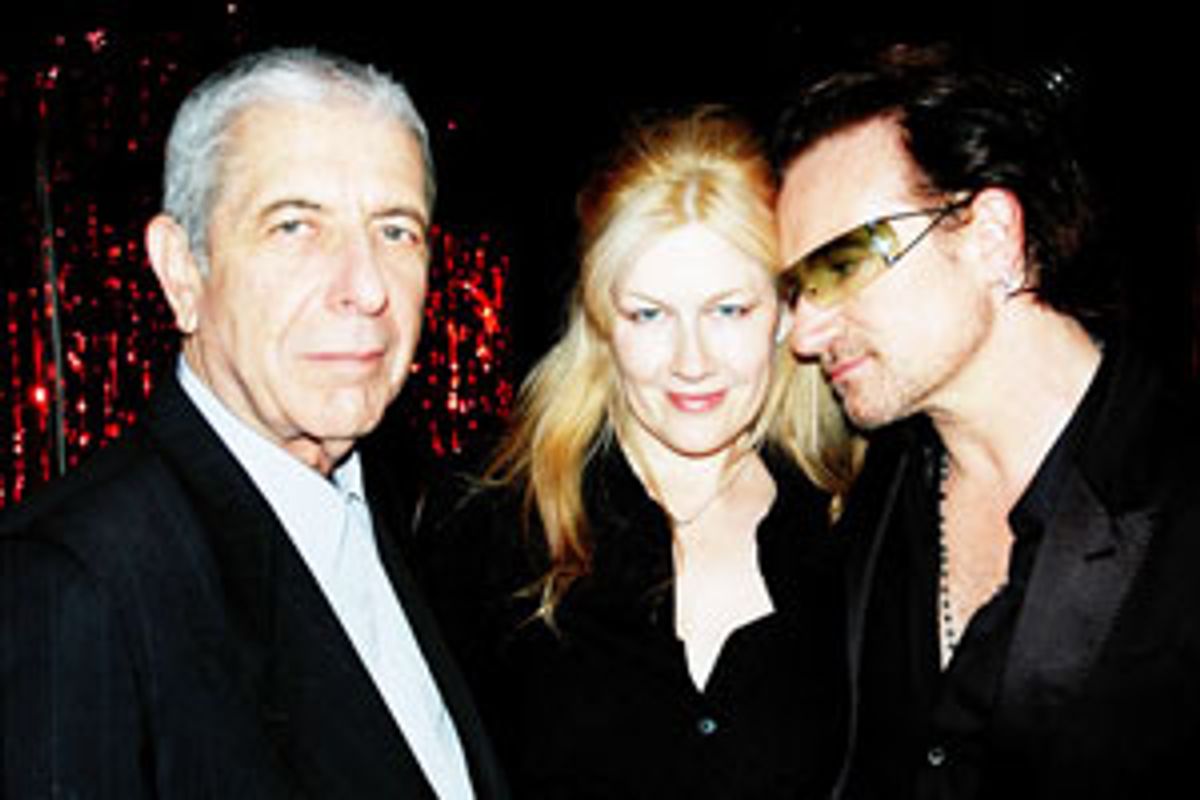 It's probably impossible to make the perfect documentary about Leonard Cohen, a poet, songwriter and performer about whom most people -- of a certain age and temperament, at least -- have ardent feelings. There was a time when every worthy record collection (and I mean record collection) included a copy of Cohen's 1967 debut, "Songs of Leonard Cohen," whose cover featured a sepia portrait of the man himself: This somber visage -- gazing straight into the camera, straight at us -- might have come directly from the Old West, except most people in the Old West never looked this impeccably groomed and elegant. There has never been anything scruffy, literally or figuratively, about Cohen. The pinpoint-precise imagery of his poetry is part of what makes it so alive. And his voice has developed a glorious depth and texture over the years, like the patina on an antique watch chain. Yesterday and today, Leonard Cohen is the picture of class -- but it's class with feeling.

Lian Lunson's "Leonard Cohen: I'm Your Man" is partly an interview documentary and partly a record of a Cohen tribute performance, organized by the ever-inventive producer Hal Willner, at the Sydney Opera House in 2005. The result is something of a jumble: The performers here include Nick Cave, Pulp's Jarvis Cocker, and the silvery-voiced Antony, and although some of the performances are lovely (the Handsome Family and Linda Thompson's somber and graceful version of "1000 Kisses Deep," for example), the problem is that once Lunson starts talking to Cohen, we only want more of him -- and we can't get enough. We peer through the thicket of sequences in which the likes of Bono, Cave and Rufus Wainwright sing Cohen's praises, but all we want is for Cohen to reemerge. We even suffer through a particularly painful butchering of "Hallelujah" -- surely one of the most beautiful songs in the English language -- at the hands of Rufus Wainwright (who does better with other material here) and two backup singers, Joan Wasser and Rufus' sister, Martha Wainwright, whose phrasing is so incomprehensible that I sometimes wondered if she even knew what song she was singing.

Even so, there's never any doubt that "I'm Your Man" has been made with love, and even when it's not quite measuring up to your hopes, you feel warmed by its affection. Rufus Wainwright offers a particularly sweet account of meeting Cohen for the first time: Cohen was in his underwear, chewing up little bits of sausage and feeding them to an injured bird he'd rescued; then he went off to get dressed, reemerging in a perfectly tailored Armani suit. (Cohen's father was an engineer who ended up in the clothing trade, which helps explain Cohen's knack for sharp dressing.)

The performers interviewed here speak so glowingly of Cohen's songs that they nearly trip themselves up: His work is so personal for each of them that articulating its significance is a struggle, and anyone who's ever tried to sum up Cohen's spectacular gifts can relate. Bono, in particular, is effusive to the point of parody. And yet by the time, at the end of the picture, he takes the stage with the rest of U2 to accompany Cohen on "Tower of Song" (in a cabaret performance filmed at the Slipper Room, in New York), even this most poised of rock stars can't help betraying some boyish excitement. Even when you're one of the biggest rock stars in the world, getting to sing with Leonard Cohen is a huge deal.

But the interview footage with Cohen himself is the best part of "I'm Your Man." Cohen, now 71, his silvery hair cropped close, has aged wonderfully: His profile has the commanding beauty of an Indian head nickel. He speaks candidly and expressively about his devotion to Buddhist teachings, and tells a number of stories that feel intimate and casual: For instance, there really was a "Suzanne," and she really did invite him to her house, where she served him tea and oranges. But she was the wife of a friend, a purely platonic acquaintance. The events alluded to in the song, he explains, with just a flicker of shy amusement, never actually happened.

"Tower of Song" is the only number Cohen performs here, and while it's not a particularly fiery performance, just hearing Cohen's voice -- just having the chance to settle into that velvety bear's paw -- is enough. This is Lunson's debut picture (Mel Gibson, a longtime Cohen fan, is one of the producers, suggesting that when Gibson isn't just being totally weird, he might actually have good taste), and she's smart enough to keep the whole affair very simple. Cohen's on-camera interviews are very low-key, and the presentation suits him: Strangely, or perhaps not, his speaking voice is almost more like music than his singing voice is. Even his plainest sentences are phrased like poetry.

We've all heard Leonard Cohen's music described as depressive. That's an easy adjective to reach for, particularly when you're dealing with potent, introspective lines like "Confined to sex, we pressed against the limits of the sea;/ I saw there were no oceans left for scavengers like me" (from "1000 Kisses Deep"). But in "I'm Your Man," Cohen hardly comes off as morose: He may be a serious-minded guy, but he's also a vibrant, vital presence. Even now that he's reached what we must reluctantly call old age, he's still startlingly youthful. Lunson includes some home-movie footage from Cohen's Montreal childhood: We see a very happy-looking, outgoing kid, pedaling toward the camera on his tricycle. This kid is so joyful, it almost hurts -- and yet there's no incongruity between the child and the aging man we see here. Anyone who knows Cohen's music knows that his lyrics are often very funny, and not necessarily in a deadpan way. But because they sometimes make us laugh -- perhaps a little ruefully -- they also cut deep. Cohen's songs are both universal and deeply personal. Even when we're listening to him alone in our room, we still feel like part of the world.