Forget abs of steel -- give me soft arms, wide hips and fleshy lips! For as long as I can remember, I've been turned on by fat women. 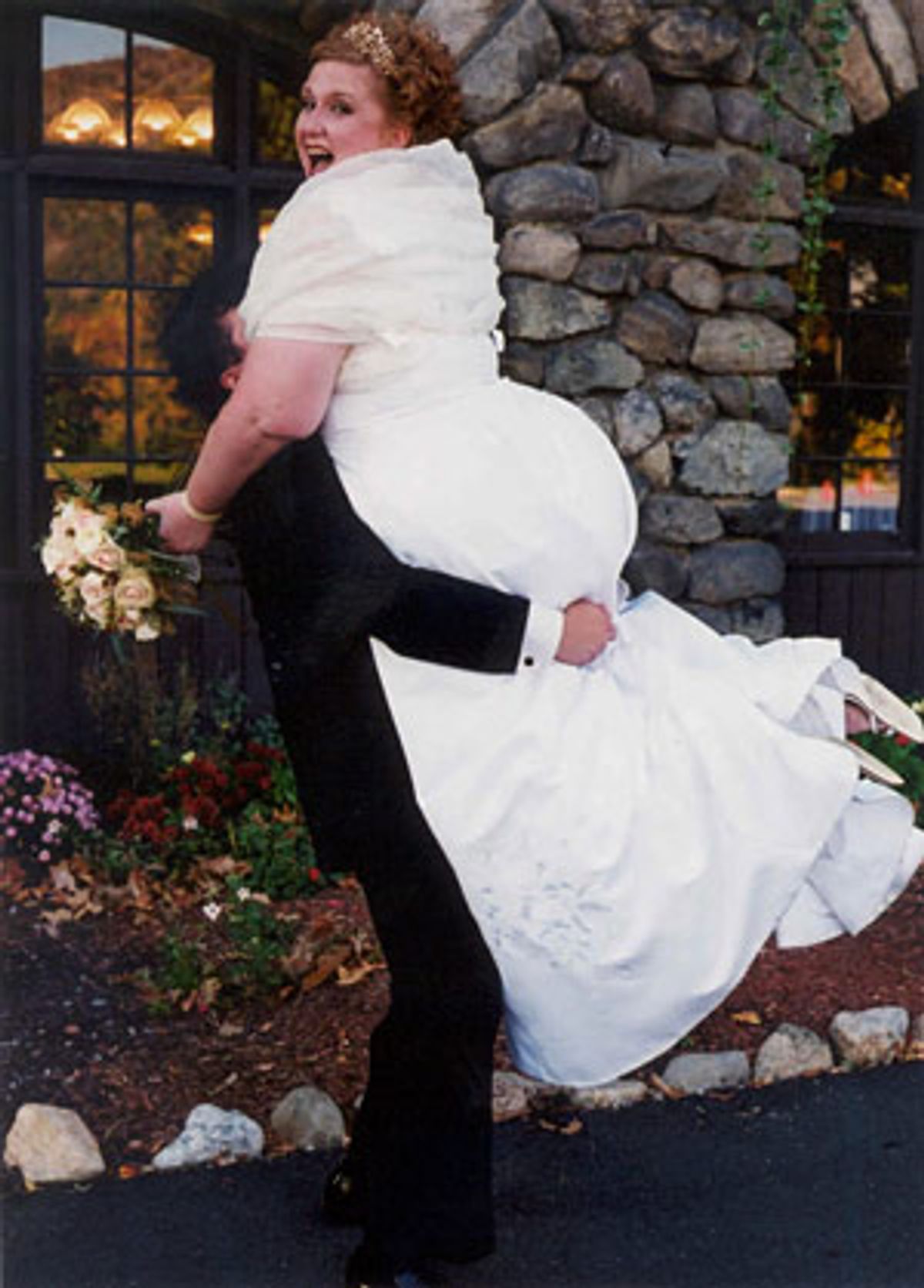 "Christ, look at that mess."

A colleague and I are driving from Hollywood to Los Angeles. I look out the passenger window and see a beautiful young woman with extra-large thighs sitting on a bus stop bench.

"How'd you like to wake up next to that?" he snickers. Though we'd just met that morning, after two hours in the car together, we've covered every subject from cars to politics to music to money. Not girls, though.

I take a deep breath.

"I gotta tell you something. I love fat women, and I'm married to one. You're entitled to your opinion, but comments like that don't float with me. She looks pretty damn cute, too."

The color drains from his face.

I knew, from the time I was old enough to know what a woman was, that I loved big women. As a kid, the "before" photos in diet ads fascinated me. The bespectacled, round beauties hiding under Snoopy sweatshirts in the corner of the school cafeteria made my heart pound. A plump teacher, a full-figured classmate, a cushiony customer in the deli I worked at in high school -- all were early crushes.

But as a teen, I worshipped from afar. While my friends ogled high school cheerleaders and drooled over Playboy and Penthouse, I felt guilty and freakish for wanting these women, and I told no one. At that time, there was only one magazine for men who wanted to see what fat women looked like without their clothes on. It was a no-budget affair published in New Jersey, and some of the models were missing teeth; but others were delicious-looking, round and smiling, proud of their generous figures. I drove 40 miles from Westchester to Manhattan to buy my copy the day it hit the newsstands every month.

In every other regard, though, I was a typical teenage guy, with a surplus of raging hormones. I lost my virginity at 16 with a plump girlfriend of two weeks, and then soon began dating an apple-cheeked neighborhood tough girl. When I moved out of my parents' house into Manhattan, I went out with women I met through mutual friends, at clubs and at classes. All were thin or close to it. I loved the sweet details of those relationships: holding hands on the street, talking on the phone after midnight, making out, sleeping together. But I just didn't feel anything approaching atomic longing for any of those women -- no matter how smart or conventionally sexy they were. And I knew what the problem was. I wanted a woman with a belly, a butt, thighs; I wanted lots of soft flesh to look at, to touch and put my arms around.

When I was alone, I questioned the origin of my longing. Was it a fetish, spurred by some suppressed childhood trauma, to be analyzed and cured so that I might someday develop a "normal" attraction to the women in Victoria's Secret catalog? Or was it something I was born with, like my perfect pitch and an ability to touch my nose with my tongue? Having a "fetish" usually means one needs a certain object or body type to become sexually aroused, and that isn't -- and wasn't -- my situation. I am attracted to women of all sizes. I just prefer a big lady, the way some women prefer a big, tall, hunky guy.

Delving into the past, I found my desires validated. The cult of thinness is strictly a modern-day phenomenon. In Billy Wilder's screen classic, "Some Like It Hot" (1959), there is a scene where Marilyn Monroe -- arguably the most famous sex symbol of all time -- is lounging on a bed, with a very prominent, jiggly belly apparent underneath her slip. In 1943's Broadway production of "Oklahoma," the character Will Parker admiringly describes his favorite burlesque bombshell this way: "One of the gals was fat and pink and pretty/ as round above as she was round below." Lillian Russell, a superstar singer, popular in the late 19th and early 20th centuries, and pursued by countless admirers, weighed over 200 pounds. Clearly, once upon a time, a penchant for plump women was nothing to be embarrassed about.

So after embarking on countless dates, and even being engaged for three years to an average-size woman, I decided to charge ahead and find a partner who not only had the requisite heart, soul and intelligence, but was also way, way bigger than me. With the aid of the Internet, I refined and pinpointed my search, the same way any man might if he were looking for a woman of a particular religion or age.

My first online date was with a 5-foot-1-inch, 325-pound, 22-year-old model. After a nice dinner, a walk and a late-night stroll, we ended up together for a night. That was when I put my money where my fantasies were; she was a woman who was approximately three times as big as any other human being I had ever touched. She was also, I realized, a living, breathing, feeling person, not an image in a magazine, with vulnerabilities and needs of her own. I didn't quite know where to start. But after a while, I began to happily, gently lose myself in her spheres, her bountiful soft flesh, her tiny lips and enormous hips. A long-term relationship wasn't in the cards, but that night was an exclamation point to my years of exploration, and it satisfied a deep longing. I wanted more.

I thought I'd make a sudden leap into a new world of physical bliss, but I realized I wasn't just looking for sex regardless of personality. I wanted to fall in love, to share a life together, to do all the things I'd done with the thin women I'd dated. I started visiting dances for big women and the men who loved them, and immersed myself in online communities of like-minded men and women. Slowly, liking fat girls stopped being something I needed to hide. I believe my preference is akin to liking polka or silent movies; not everyone is into it, but just because you are doesn't make you a freak. You're just a part of a lesser segment of society. I find many fat women profoundly beautiful to look at and touch, though I realize that by saying so I am embracing an altogether different standard of beauty than does most of the Western world.

I finally saw her sitting in the window of the Coffee Pot on West 49th. She was 24, had a mane of red hair, freckles on her plump arms, and sported a tan vinyl skirt over a size 18 frame. I'd placed a personal ad, she'd answered, and we agreed to meet. We didn't intend to spend the night together, but our first date ended up being 16 hours long. Neither of us wanted to go home, and home soon became wherever the other one was. A few months later, Julie moved into my place; five years later we were married.

She'd always been plump, even as a toddler in Dayton, Ohio. When we met, she told me about enduring doctors' snide comments and how her mother was always urging her to lose weight for her health or because, as she said, "Men don't like fat girls." That Julie turned out a healthy, happy, confident person thriving in Manhattan, making a living as a singer and actress, and working in the plus-size fashion industry was remarkable; I was and am very proud of her. I am also still desperately attracted to her, 10 years later.

My family never said a word about our relationship. I know it must be tough for them to keep quiet, because they read the New York Times and all the other papers of record that regularly announce that obesity is a national health crisis. But other than one conversation I had with my 5-foot-tall, 100-pound mother two years ago, when she asked, "Don't you think Julie should lose weight?" I've heard not a peep from anyone. I don't know whether that silence is born out of acceptance, politeness or indifference.

Which isn't to say I don't privately fret. I'd like Julie to live a long, long time, and I, too, read every article about heart disease, joint pain, diabetes and the innumerable other ailments afflicting the obese. But usually, in chorus with the fear, another small voice in my head chimes in. Health, it says, is not only physical; it's also mental, spiritual and emotional. And not only is Julie physically healthier than I am -- though I eat raw veggies, run and lift weights six days a week -- but she's also more balanced, less impulsive and kinder to herself and others, all things I'd like to be.

Finally, my wife was big when I found her. It isn't as though I grew her from a seedling into a 200-plus-pound tomato. I can't take responsibility for someone else's body; it's all I can do to take care of my own. I won't accept being labeled a closet Kevorkian just because I love a woman and her fat, too.

And how does she feel about me and my passion for her body? "I love it," she says. "For years I thought I would have to find someone who loved me in spite of my size, someone who would be willing to put up with it. To have someone adore me and my body is a gift." Julie isn't big enough for people to gawk and say, "Oh, my God, look at that enormous woman!" though she still does, from time to time, come home stung by cruel comments from jerks on the Manhattan streets. But these are balanced by the number of compliments she gets everywhere else.

Now I don't keep quiet when people make comments about fat people in front of me, and I sometimes make a point of telling colleagues I like big girls if it comes up -- or if they linger over the latest Sports Illustrated swimsuit edition. When someone makes a sizeist remark about fat women, though, my fists clench and my heart beats a little faster.

Not long ago, at a business breakfast of eight men and one woman, another colleague, a 50-something journalist -- with a sizable gut himself -- told a fat-chick joke, the one about "rolling her in flour and finding the wet spot." I took a deep breath.

"I gotta tell you something, Mike. I love fat women, and I'm married to one. You're entitled to your opinion, but comments like that aren't going to float with me..."