The Bush code of secrecy

How the White House is covering up CIA abductions, brutal interrogations and spying on Americans. 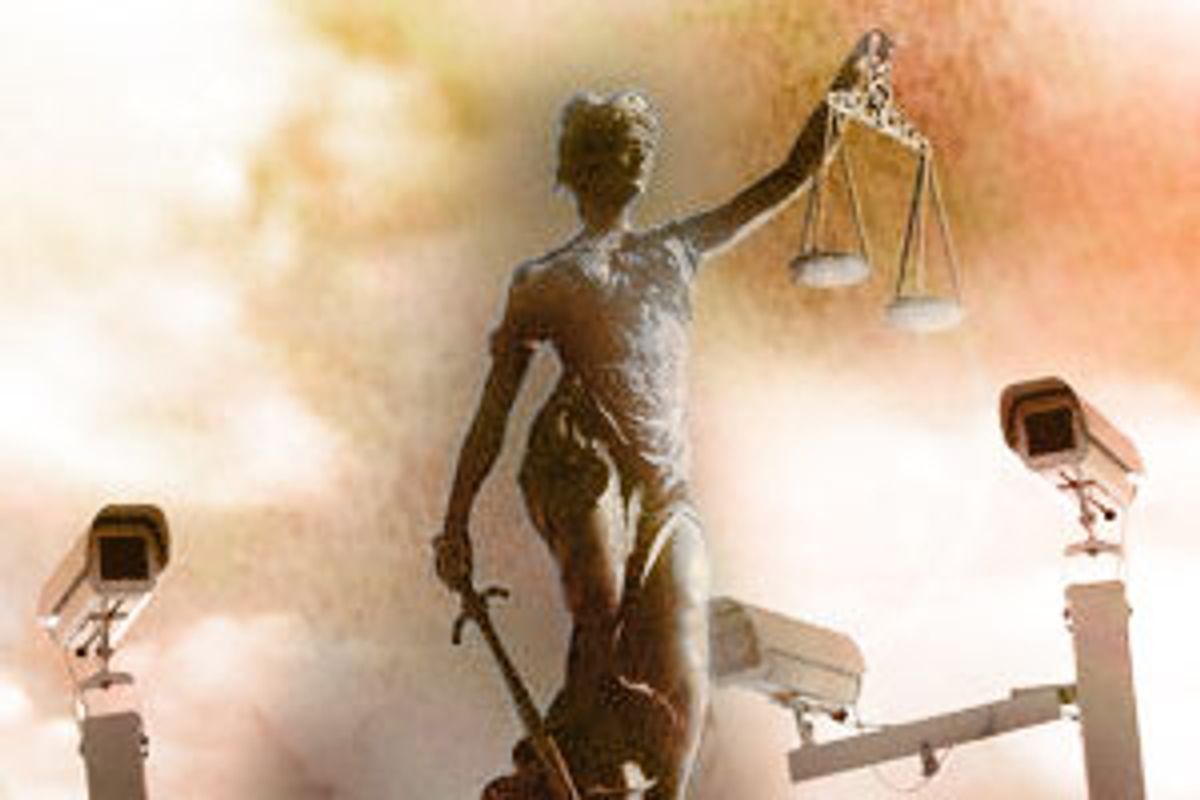 American presidents have long tested the bounds of executive power during wartime. But when it comes to protecting its secrets, the Bush administration has flexed unilateral power to a degree never before seen in U.S. history.

Since 2001, the administration has wielded the "state secrets" privilege as a wide-ranging weapon to snuff out legal challenges to its most draconian tactics in the global war on terror. At stake are no less than bedrock American moral and legal principles. Bush lawyers have aimed to shoot down court cases involving the indefinite detention and brutal interrogation of prisoners, the covert transfer of terror suspects to foreign governments known to torture, and domestic surveillance prying into the lives of thousands of Americans.

Established by a Supreme Court ruling in 1953, the state secrets privilege allows the executive branch to limit or dismiss court cases that may expose sensitive information and jeopardize national security. To that end, a judge can decide to disallow certain evidence, or even go so far as to quash the whole case, without further remedy in the court system.

When asked, U.S. judges have almost always consented to state secrets claims. But it has come up rarely -- just four times in the first 23 years following the 1953 decision. After that, state secrets claims were filed at a fairly even pace during the Cold War and beyond, once or twice per year, under Democratic and Republican presidents alike.

But over the past five years, lawyers representing the Bush administration have asked federal judges to throw out cases entirely at least 21 times -- and likely more often than that, according to Meredith Fuchs, the general counsel for the National Security Archive at George Washington University. Beyond the 21 cases, there could be others that have yet to turn up in her research, Fuchs says, simply because the court or the news media doesn't always report on such cases to the public. Other cases facing demise by state secrets privilege may have begun under seal because of their sensitivity and are therefore unknown to the public -- Fuchs says she knows of at least one such case pending in federal district court in Washington.

The White House appears to have realized how powerful a tool the state secrets privilege can be, Fuchs says. "There's no question that this administration is using it at a significantly higher rate than any other before it."

But even more than the pace, what now matters is the potency of the tactic, says John Kroger, a professor at Lewis and Clark law school and a former federal prosecutor. "We're seeing a radical departure in how state secrets is being invoked," he says. "We're talking about government actions affecting millions of Americans. We're facing major questions about constitutional law, and the Bush government is saying they can't be adjudicated at all. It's a huge shift in the landscape from how this doctrine has been used in the past."

Three cases challenging domestic spying -- what the Bush White House calls its "terrorist surveillance program" -- are stirring in federal court. Bush lawyers have moved to suppress all of them, citing state secrets privilege. A pivotal decision could come today in San Francisco, where U.S. District Judge Vaughn Walker could be the first to rule on such a claim in a domestic surveillance case. He'll decide whether the Bush administration's argument should mean the end -- before it ever begins -- of a class action lawsuit against AT&T for secretly handing over customers' phone calls to the government in the name of battling terrorists.

In the hands of the Bush administration, the baseline for state secrets is no longer scrubbing a case of sensitive evidence, but wiping the case away completely. Historically, most state secrets claims were about stopping the disclosure of specific evidence, and the cases proceeded with those limits in place. Particularly sensitive cases could even be conducted entirely under seal. Kroger points to the trial that followed the 1993 World Trade Center bombing. All the defense attorneys in the case had to get classified security clearance, and evidence was reviewed inside a secure facility.

"To prevent a case from going forward at all by claiming that the entire case itself would jeopardize national security," Kroger says, "is a really drastic remedy."

It's a remedy administration lawyers are using with progressively more brazen rationale. At issue in San Francisco, in Hepting v. AT&T, is whether the telecom company gave Uncle Sam access to customer phone calls with or without necessary court authorization. Yet, administration lawyers filed a brief late last week claiming that "the court -- even if it were to find unlawfulness upon in camera, ex parte review [a review done privately by the judge in chambers] -- could not then proceed to adjudicate the very question of awarding damages because to do so would confirm Plaintiffs' allegations."

In other words, the Bush lawyers argue that even if Walker determined behind tightly closed doors that the Bush government broke the law, he could do nothing -- because to continue with any court proceedings or ruling, they argue, would confirm the existence of domestic surveillance operations and thereby jeopardize national security. Apparently, they've taken that position even though domestic surveillance activity under Bush has been covered by every major news outlet and has been acknowledged, albeit only narrowly, by top Bush officials and the president himself.

"It would be hard to overstate the significance of this proceeding," Steven Aftergood, director of the Project on Government Secrecy at the Federation of American Scientists, said in an e-mail. "It is not just a dispute over surveillance. It is a test of our whole system of government. They are not only arguing that the courts cannot adjudicate the matter, but that Congress is powerless to limit the government's activities. If the administration prevails, then we will be well on our way to a different form of government in which executive authority is effectively unchecked."

Dozens of private class action lawsuits have been filed across the country against telecom companies this year, following news reports of domestic surveillance under Bush. On Monday, administration lawyers filed a motion to have all the lawsuits consolidated into one case in federal court in Washington, where they intend to seek dismissal. There is now also a growing list of state officials, from New Jersey to Missouri, subpoenaing information from telecom companies; the administration has already intervened in New Jersey citing state secrets privilege and will no doubt do so from coast to coast.

The Bush government has already killed several cases probing the darkest corners of its war on terror. In May, a lawsuit brought by Khaled El-Masri, a German citizen kidnapped by the CIA in 2004 and allegedly tortured in Afghanistan over a five-month period, was dismissed after the administration invoked the state secrets privilege. El-Masri was seeking remedy for what had turned out to be a case of mistaken identity: Eventually, after the U.S. government realized it had seized the wrong man, El-Masri's ordeal ended with him being flown to Albania and unloaded on a country road at dusk.

In his May 12 ruling, Judge T.S. Ellis noted that his decision to throw out the case was "in no way an adjudication of, or comment on, the merit or lack of merit of El-Masri's complaint." Ellis further concluded that "if El-Masri's allegations are true or essentially true, then all fair-minded people, including those who believe that state secrets must be protected ... must also agree that El-Masri has suffered injuries as a result of our country's mistake and deserves a remedy." He conceded that one would not be forthcoming from the U.S. court system.

"Terrorists can kill people and destroy property," Aftergood commented on Secrecy News, following the decision. "But they cannot undermine the rule of law, or deny injured parties access to the courts. Only the U.S. government can do that."

The Bush administration's aggressive deployment of state secrets claims bears no small resemblance to right-wing Senate Republicans threatening to wipe out Democratic filibustering of judicial nominees. It has become a "nuclear option" for the executive branch, one that aims to obliterate any judicial check on Bush's most central, most closely held tactics in the war on terror.

"It's clear from the last five years that the administration has the overall goal of reducing scrutiny of its actions in the national security realm," Kroger says. "These state secrets cases are part and parcel of that strategy."

It's a strategy that Vice President Cheney trumpeted again this week, while answering questions at a National Press Club luncheon in the nation's capital. Cheney reiterated his belief that fallout from the Watergate scandals and the Vietnam War beginning 30 years ago had allowed Congress "to encroach upon the powers and responsibilities of the president." When it came to conducting national security policy, he said, "it was important to go back and try to restore that balance," and to return to a "strong presidency." He cited the administration's terrorist surveillance program as a prime example.

Robert Dallek, the presidential historian, says that "invoking the national security card" during tumultuous times is not unusual. Lyndon Johnson hoped to suppress antiwar dissent during Vietnam when he spoke of "nervous Nellies" -- a phrase Dallek likens to the refrain Republicans use today for ridiculing Democrats who would "cut and run" from Iraq. Richard Nixon, during Watergate, and Ronald Reagan, during the Iran-Contra scandal, both fired off a barrage of executive privilege claims in the name of national security in order to evade scrutiny.

But Dallek says the Bush administration's seizure of power has gone beyond the pale, including its assault on judicial review. "It has been a central theme from the start of the administration, and they're pushing it like crazy," he says. "Historians will pay a lot of attention to their abuse of separation of powers -- the expansion of executive power and a return to the notion of 'the imperial presidency.'"

Sen. Pat Leahy of Vermont, the ranking Democrat on the Judiciary Committee, has been a fierce critic of the Bush administration's consolidation of power, particularly on the subject of domestic surveillance. "Each day seems to expose another example of the Bush-Cheney administration's methodic march for expanded executive power," said Leahy, in a statement to Salon. "The list keeps getting longer, whether it's this obsessively secret administration classifying historical documents, or assigning its own interpretations to laws passed by Congress. Now the administration is adamant about avoiding any type of judicial review of its domestic warrantless wiretapping program. This administration has a paranoid aversion to openness and accountability, making it all the more important to ensure that our system of checks and balances is working as it was intended."

For the moment, at least, that burden rests on the shoulders of Judge Walker in San Francisco. Kroger says the administration's broad efforts to smother fundamental questions of constitutional law under state secrets claims could provoke judges to scrutinize how far the doctrine should really reach. He expects that in all likelihood the question will not be decided short of the Supreme Court.

"The Bush administration is asserting, in essence, that the courts simply can't play any role here," Kroger says. "That's a radical departure, and if it's true, a huge part of the government's war on terror is off limits."