Douglas Brinkley's epic account of Hurricane Katrina and its aftermath stops short of laying blame where it belongs: On President Bush. 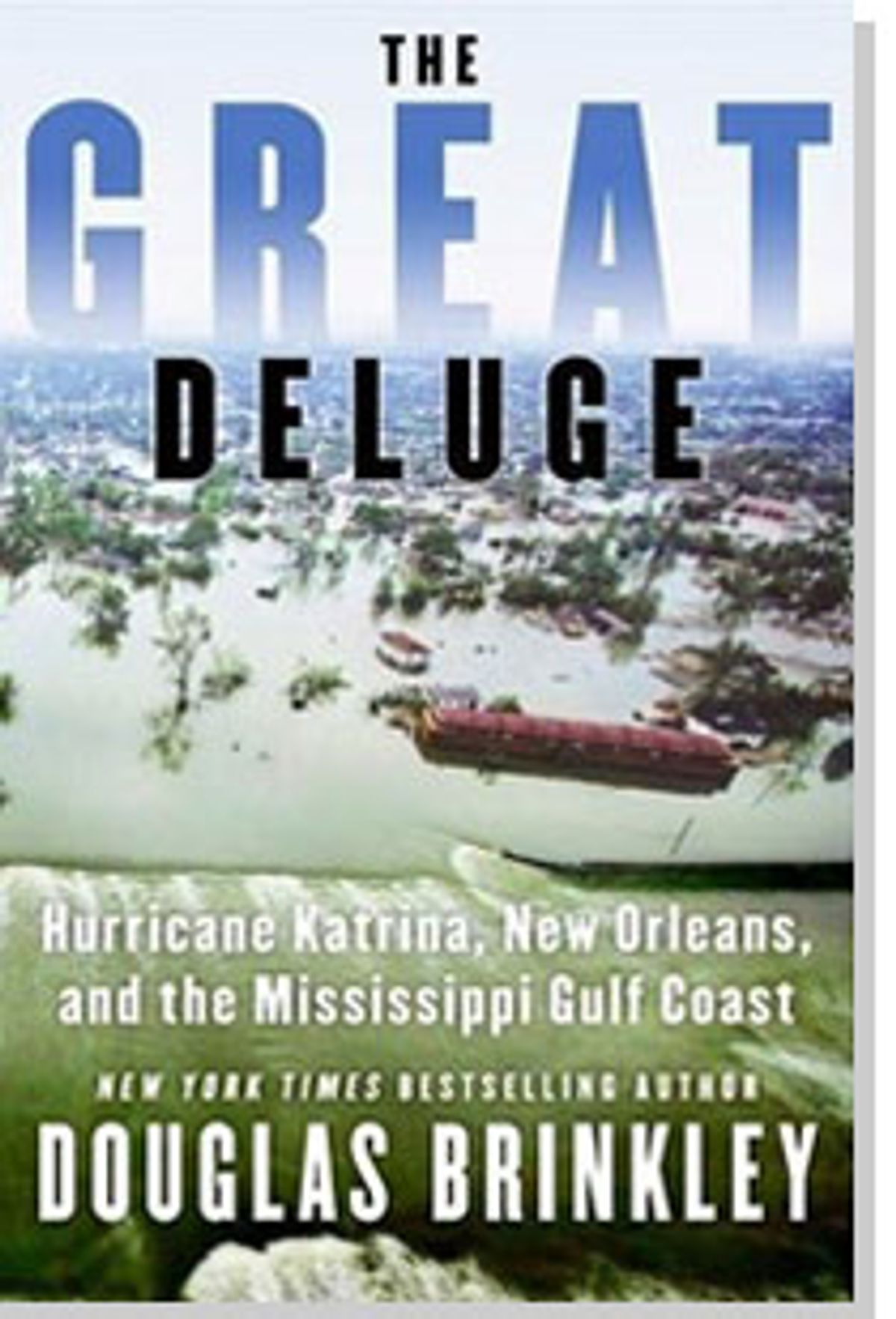 Douglas Brinkley's "The Great Deluge: Hurricane Katrina, New Orleans, and the Mississippi Gulf Coast" is 716 pages long; by the time you've finished it, you may feel a bit as if you've been deluged. I wish I could say that's a compliment.

It could have been no easy task for Brinkley to sift through the mountains of documents, reports and news accounts (to say nothing of his own personal interviews with flood victims, police and officials) and prepare a book this thick in the less than nine months following what was perhaps the worst natural disaster in American history. One wants to applaud him for, if nothing else, an extraordinary effort of concentration and stamina. But chapter by chapter, almost page by page, a question seems to hover over "The Great Deluge": Why, exactly, did a book this massive need to be published so soon? (I do think I have an answer -- more on that in a bit.)

Though the book takes in the destruction of the Alabama, Mississippi and Louisiana coasts, it's obvious that Brinkley's heart and soul are invested in New Orleans, the city where, as he phrases it, "Eccentricity was embraced as a virtue." The "was" stands out as a kind of Freudian slip, for even as Brinkley expresses optimism about New Orleans' bouncing back, one senses that the city that produced Louis Armstrong and inspired Tennessee Williams, the city "built on a kind of isolation from the mainstream," is gone forever.

Brinkley prepares us for the disaster with a hard look at a New Orleans that tourists never see. New Orleans has (or had, before Katrina) a higher proportion of people living below the poverty line, between 25 and 30 percent, of just about any major city in the U.S. In New Orleans, "Blue-blood tradition and big business had pushed the poor off to the side and kept them hidden. Once whites left for the suburbs" -- before Katrina, African-Americans constituted slightly more than two-thirds of the population -- "public schools in New Orleans became an abomination." Given the city, state and federal government's absurd refusals to heed warning after warning about the instability of the levees, clearly New Orleans was a calamity waiting to happen, and its full weight fell upon the people who could least afford to resist it. Many of them were so poor that "they didn't hear about Katrina on television, for a simple reason: they didn't own a [TV] set."

Brinkley's background and buildup to the hurricane and subsequent flood are superb, worthy of David McCullough's classic, "The Johnstown Flood," which was clearly Brinkley's model (though he refers to it only once). But McCullough's was a work of reflection, written 98 years after the fact. As Katrina's floodwaters begin to reach rooftop levels, roughly 200 pages into "The Great Deluge," Brinkley's objectivity slips away and he starts to lose his grip on his narrative. His exasperation with the ineffectualness of officials at every level is justified: "Incredibly, no one was in charge, no one was fully responsible for overseeing just who was doing what to the levees." The worse the situation gets, the more the book seems to spin out of control, as if the subject is too large and too emotionally charged for Brinkley, who is looking for a human face to pin the blame on.

And the face turns out to belong to New Orleans Mayor Ray Nagin, who at various times seems befuddled, bewildered and distracted, and at all times appears incompetent. Louisiana Gov. Kathleen Blanco fares somewhat better. Both she and Nagin were "neophytes" when dealing with the U.S. Coast Guard and Louisiana National Guard, but "[s]he did, however, try to look like a politician in charge. Nagin wasn't even managing that much." FEMA director Michael Brown is dismissed by Brinkley as "[s]elf-centered and comically suave  a cuff-link shooting Republican dandy."

It turns out that, in Brinkley's account, the real villain of Katrina is Homeland Security chief Michael Chertoff, who seems to have been chosen by the Bush administration solely for the lack of compassion the job would require. Brinkley lets loose on Chertoff: "While fellow citizens were dying, screaming for help, clutching chunks of floating wood and palm fronds trying to stay alive, Chertoff, the one American who could have helped the most, turned a casual, cold indifferent eye to their plight." I have no doubt that Chertoff deserves all the grenades Brinkley or any other historian can lob at him, but arrogant and unresponsive as he was, it seems as if he is being used here as a buffer -- or perhaps "levee" is a more appropriate term -- to prevent the most severe criticism from reaching its source. That levee can't hold back the weight of evidence that the principal blame for Katrina falls not on any member of the bureaucracy -- or even all of the bureaucracy taken together -- but on the president.

Though every tributary the floodwaters take leads to the White House, Brinkley seems strangely reluctant to follow their currents. "After Katrina, the Gulf South region -- and the United States as a whole -- needed compassion. What it got instead was the incompetence of George W. Bush, who acted as though he were disinterested in a natural disaster in which there was no enemy to be found ... Bush's slow response to the Great Deluge made Americans ask if he was a 'bunker' commander in chief ... relying too much on cautious paper pushers such as Brown and Chertoff for advice." This criticism is curiously muted, coming as it does at about the midway point of the book rather than serving as the author's conclusion. Moreover, it's a feckless point, practically offering Bush supporters a side door to slip their man through: Bush was too concerned with the war on terrorism to effectively address a natural calamity. I know a few apologists who absolved Bush of all major blame, but I don't know anyone, much less friends and family on the Gulf Coast, who thinks that Bush's major problem was that he relied too much on advice from Brown or Chertoff or anyone else.

Even if much of the misery that followed in the wake of Katrina could have been prevented, what people wanted to see was the commander in chief be such, not to take advice from subordinates but to give them orders, instead of acting, in the words of Lewis Black, like "someone watching a TV movie of the week and saying, 'Wow, look at all those goddamn special effects!'" Is it possible that Douglas Brinkley doesn't know that what Americans wanted to see was someone who said the buck stops here, not someone who didn't seem to know there was a buck in the first place? The last thing Americans wanted to hear after the levees broke was a series of ideological debates over whether primary responsibility for action fell on the state or federal government, yet this is exactly what Bush gave them.

Brinkley's criticism of Bush -- "He should have showed he cared a bit more" -- is so compromised that the reader may be forgiven for wondering if he was afraid of coming to the obvious conclusion for fear of being accused of political bias by several of the TV hosts whose shows he has appeared on while plugging his book. It's hard to imagine that MSNBC's Joe Scarborough, for instance, would have welcomed Brinkley with such open arms had he come down on Bush with the same force as he did on Chertoff, who is virtually invisible to the American people. Brinkley seems to have written "The Great Deluge" with one eye cocked toward the media that would be reviewing it. Scarborough, for instance, "was keenly attuned to the devastation along the Gulf Coast  Scarborough pulled no punches in describing the lack of federal aid reaching the region  his diagnosis of the failures [of the federal government] were right on the mark" -- the federal government, in this case, being an institution that seemed to have only minimal connection with the president elected to run it.

Brinkley's fawning over the media borders on the suspect -- if you're an online journalist or media critic and you weren't praised in this book, then you had better start wondering if you've got any real clout. "What a truly superb job" the newspapers did, he writes, proceeding to list every publication from the New York Times to USA Today that would be reviewing his book, and for good measure, "Likewise, CNN, ABC News, Fox News Channel, NBC News, MSNBC, and National Public Radio." I can't imagine anyone he left off that list, except Dan Rather's old network, CBS. And, oh yes, "The Daily Show." (Though he did put in an appearance on "The Colbert Report" last Thursday.) Brinkley is correct that the media did a superb job in covering Katrina, that it was the media, not the Bush White House, that forged the uncreated conscience of the country. But one can't help wondering why so many individual pats on the back were needed, particularly since they are so often given to those who patted Brinkley right back.

So, back to that original question -- why did "The Great Deluge" have to be published so soon after the event? Apparently, in order to stamp Brinkley as the "official" historian of Katrina and give him proprietary rights over other writers as the go-to guy for comment on future developments on the Gulf Coast. By now, everyone should know that Brinkley, a native Louisianian, took an openly partisan stance in the recent mayoral election in New Orleans, an opportunity offered to him by the publicity accorded to this book (publicity that began well before the book's publication when it was excerpted in Vanity Fair). This isn't the place to discuss recent charges by Nagin and his supporters that Brinkley is wrong about where Nagin was or wasn't at a particular time and what he failed to do. Yet, even if Nagin refused to speak to Brinkley for this book, Brinkley should have refrained from relying so heavily on Nagin's opponent in the recent election, Mitch Landrieu, to criticize Nagin's performance. No matter how poorly Nagin reacted to the crisis, he is too small a figure to place at the center of such a mass tragedy; the effect of Brinkley's relentless Nagin-bashing is surely one he didn't intend, namely to make the reader feel sympathy for a not particularly resourceful man who was swamped -- almost literally -- by circumstances that would have stymied Douglas MacArthur. Possibly the reelection of Ray Nagin as mayor of New Orleans will have a deleterious effect on the book's credibility and status, but that remains to be seen.

"The Great Deluge" has inspired much fruitless argument as to whether journalism and partisanship should mix, but the truth is that from Addison and Steele to A.J. Liebling, much of the best journalism has always been written as a passionate advocacy for something, so there's no reason why a book about Katrina shouldn't take sides. The problem with Brinkley and "The Great Deluge" is not, as many are implying, its faults as journalism. There are numerous small errors such as the spelling of some names and Brinkley's confusing of the time zones relative to Mobile, Ala., and Washington, but dwelling on such errors amounts to nit-picking when considering the enormity of the events Brinkley is dealing with. The problems with "The Great Deluge" emerge when one judges it by the standards of the history it aspires to be.