This sturdy, poetic fantasy proves that, of all comic-book heroes, the Man of Steel belongs to everyone. 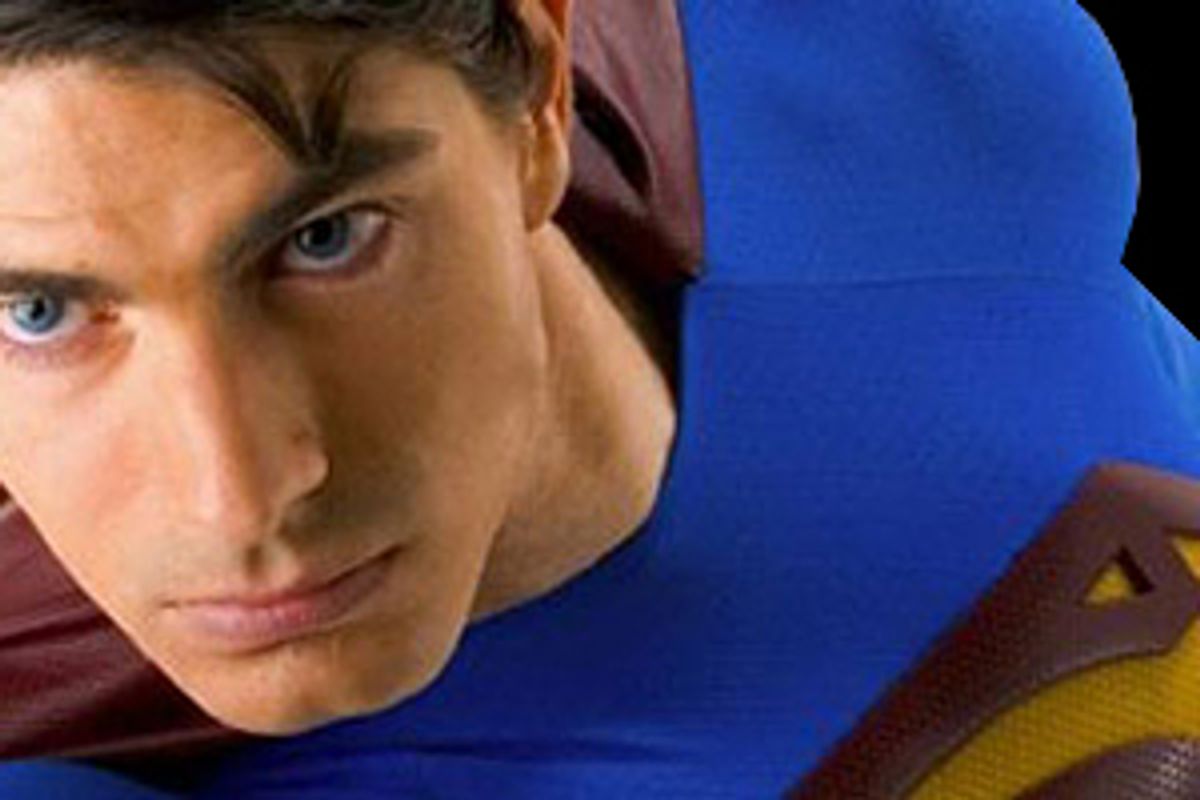 Comic-book enthusiasts are so protective of their heroes that they sometimes border on thuggishness: If you're not already schooled in every nuance of Batman, Spider-Man or X-Men mythology, don't even bother showing an interest -- it's far too late for you to catch up.

But Superman -- who made his first appearance in a 1930s comic strip before becoming an icon of '50s television and the nexus of an uneven movie franchise in the '70s and '80s -- may be the ultimate comic-book hero, too big and too strong to be confined by geek snobbery. You don't need special credentials to reckon with Superman's strengths, or his vulnerabilities: Everyone in the world has the capacity to understand Kryptonite, and almost everyone can connect with the idea of a "man" forced to leave his home planet, unable to ever return. He's not just a construct but a part of our mythology as modern citizens of the world. Of all comic-book heroes, Superman belongs to everyone.

The title of Bryan Singer's sturdily poetic "Superman Returns" may be something of a misnomer: Can a hero as universal as Superman ever really go away? But the title makes perfect sense on other levels: This is a picture that, spiritually speaking, at least, picks up where "Superman" (1978) and "Superman II" (1980) left off, altering our brain waves so that the disappointment of the third and fourth movies of the series has been erased.

This is a beautifully made picture, a modern-day fable marked by a strong sense of continuity with the past, and not just the recent past: The art-deco-influenced production design, the lighting, and some of the camera work carry echoes of German Expressionism. The costumes (they're by Louise Mingenbach) are '40s movie-star garb filtered through a '70s sensibility -- a way of honoring the sartorial vibe of Christopher Reeve and Margot Kidder in the earlier movies, and also of tracing the Superman story to its just-pre-World War II roots. When Kate Bosworth, as Lois Lane, changes out of her Rosalind Russell tweed suit to attend the dinner at which she'll be awarded a Pulitzer Prize (her winning essay bears the title, transparently redolent of heartbreak, "Why the World Doesn't Need Superman"), her dress is a full-length ripple of dark silk worthy of Barbara Stanwyck circa "The Lady Eve." Unlike so many contemporary Hollywood movies, which strut into our theaters as if they believe they've sprung fully formed from the head of Zeus (or maybe even just Scott Rudin), "Superman Returns" knows where it comes from.

But to know where you've come from, you first have to realize where you are. Singer -- who also made the first two X-Men movies -- places "Superman Returns" squarely in the modern world, a world in which 12-year-olds can snap photojournalist-quality pictures with their camera phones and real estate (as opposed to water or clean air) is considered a precious, exhaustible resource. In "Superman Returns" -- which was written by Michael Dougherty and Dan Harris, also the writers of "X2: X-Men United" -- the Man of Steel (Brandon Routh) returns to Earth after a mysterious absence of five years: He has tried, unsuccessfully, to find what was left of his own people, but has come to realize that Earth -- a place in which he has never felt fully at home -- is home.

His adoptive mother, Martha Kent (played, wonderfully, by the incomparably beautiful Eva Marie Saint), is thrilled to see him. But when he returns to his old job at the Daily Planet, in his Clark Kent guise, he realizes that his true love, Lois, has given up on him after his disappearance. She's raising a son, Jason (Tristan Lake Leabu), with another man, Richard White (James Marsden, in a small but nicely shaded performance) -- the nephew of the Daily Planet's editor, Perry White (Frank Langella, showing off his knack for comic gruffness). And there are other problems for Superman to tangle with: Lex Luthor, played by Kevin Spacey -- who's funny and sharp in a way he hasn't been, in the movies, for a long time -- has a new plot that involves creating a continent where none existed before: It will eventually usurp and destroy the United States, and he'll be the most powerful man on the planet. (His bad-gal moll, Kitty Kowalski, is played wonderfully by Parker Posey, wearing a succession of terrific faux-'40s outfits that play up her resemblance to Katharine Hepburn -- or, maybe more accurately, to a Hirschfeld caricature of Hepburn.)

And so this Superman has to get busy, fast. But Routh's Superman is a very different one from the wonderfully wry one Reeve gave us. This Superman is hardly more handsome than Reeve's -- I'm not sure that would even be possible. But Singer and Routh have stressed Superman's vulnerability, and his sense of isolation, rather than his invincibility. As Clark Kent, Routh is suitably absent-minded and boyish; but as Superman, he's a man out of time -- a soul who's uncertain about where he belongs, although he's unwaveringly certain about what he must do. We see the face and hear the voice of his father, Jor-El (courtesy of archival Marlon Brando footage from the earlier movies, as if Brando himself were speaking to us across the waves of the afterworld), explaining to his young son that while he'll never be like humans, he must make it his duty to help them.

In "Superman Returns," Singer and Routh make us feel the weight of that mission. Routh's handsomeness has an almost airbrushed quality -- he might have just stepped off a Pixar drawing board -- and the camera gazes at his face as if trying to reckon with its unearthliness. This Superman is a matinee idol for a post-matinee world -- dazzling as he is, there's also something sweetly unassuming about his beauty, as if he himself were a little surprised that his good looks have so easily made the transition from old-time comic-book panel to modern movie screen. This is a Superman we instantly recognize, complete with those remarkably molded pecs and that brilliantined curl at the center of his forehead; and yet he's somehow remote from us. Routh's performance isn't an affable, relaxed one, and he's sometimes a bit difficult to read. But his face can appear immobile one instant, and transformed by just a flicker of disappointment or uncertainty the next. Routh's Superman is both a man of outer space, and a boy raised on a farm. That's why it's horrifying when a bunch of baddies beat the crap out of him, after he's been weakened by Kryptonite, just because they can. They punch and kick him; they hold his head under water. It's the most primitive kind of violence, but also the kind that cuts closest to home.

"Superman Returns" isn't a dour picture, and it's hardly dark. But its beauty is the melancholy sort -- when Superman uses his X-ray vision to gaze through the walls of Lois and Richard's house, getting a glimpse of their home life (including all its emotional comforts, as well as the couple's little squabbles), it's clear he's an eternal outsider, looking in. Partly, "Superman Returns" is a wistful meditation on the nature of parent-child (particularly father-son) relationships. The picture is also remarkably attuned to the varying shapes and structures modern families can take. (Although the right often likes to paint Hollywood movies as a repository of lax principles, it's rare to see couples living together out of wedlock in mainstream pictures, as Lois and Richard are here.)

But if "Superman Returns" has more serious underpinnings than the previous Superman pictures did, it also has its share of visual joy. (The cinematographer here is Newton Thomas Sigel.) Superman manages to grab hold of a flaming, about-to-crash airplane, and, after a little effort, manages to land it, with elegant implausibility, in the center of a baseball diamond. And in one of the pictures loveliest moments, Lois -- as portrayed by Bosworth, she has a flinty sweetness -- meets with Superman on the roof of the Daily Planet. She's still angry with him, since he left her, without explanation, five years earlier. But as the two of them ease into tentative conversation, they nudge closer. She slips daintily out of her high-heeled suede shoes and steps onto the tops of Superman's dark red boots, getting ready for takeoff. Her boyfriend, Richard, is a pilot, she reminds him: "He takes me up all the time," she says. "Not like this," he responds, before the two of them soar off into the night sky.

Even with touches like that moonlight flight, some moviegoers (and Superman fans) may feel that "Superman Returns" is more serious than it needs to be. After the screening I attended, I heard moviegoers mulling over the picture's numerous instances of Christ imagery, which, although they didn't mar my enjoyment and appreciation of the movie, are probably more heavy-handed than they need to be. Singer and his writers seem to be grappling toward larger questions of faith and human expectations of God: At one point Superman glumly observes to Lois, "You wrote that the world doesn't need a savior, but every day I hear people crying for one," and his voice is loaded with uncertainty, as if he knows he's not the man to fit the bill.

I happen to think Christ imagery is misplaced in superhero movies, but perhaps not for the obvious reasons. I don't think of superheroes as God substitutes -- I see them more as fantasy interventionists: God "allows" terrible things to happen, and superheroes step in, when possible, to save the day. Maybe their greater function is to help preserve our faith -- to keep us believing when the higher power lets us down.

That's also part of the reason kids love comic-book heroes: They stand, tall and strong, against the hopelessness of feeling helpless. The film critic Kent Jones, writing in Film Comment after 9/11, mentioned that his son had asked him why Superman couldn't have come down and saved the World Trade Center. The anecdote is wrenching not just because it so clearly crystallizes a child's-eye view of the world, but because in those earliest moments, as we watched a skyscraper crumble on television (or perhaps in real life), what was happening seemed so incomprehensible that the idea of Superman swooping down and steadying everything with his strong, stable palms seemed almost plausible.

But just for an instant. And then, of course, reason must kick in. Superman doesn't really exist, and in the face of the unspeakable, there's no one who can save us. "Superman Returns" is a fantasy made with that reality in mind. It's as if Singer and his actors were acknowledging that, like Superman himself, we can't go home again: A return to that kind of innocence is impossible. But "Superman Returns" gives us something valuable in exchange: We can't control the fate of the world, but the myths we create -- the myths we love -- will endure long after we're gone. Superman, born in 1938, is still very much alive in 2006. The Man of Steel has so skillfully bent the bars of our imagination that he seems real to us. And in a sense, he is.