An Army document proves that Guant 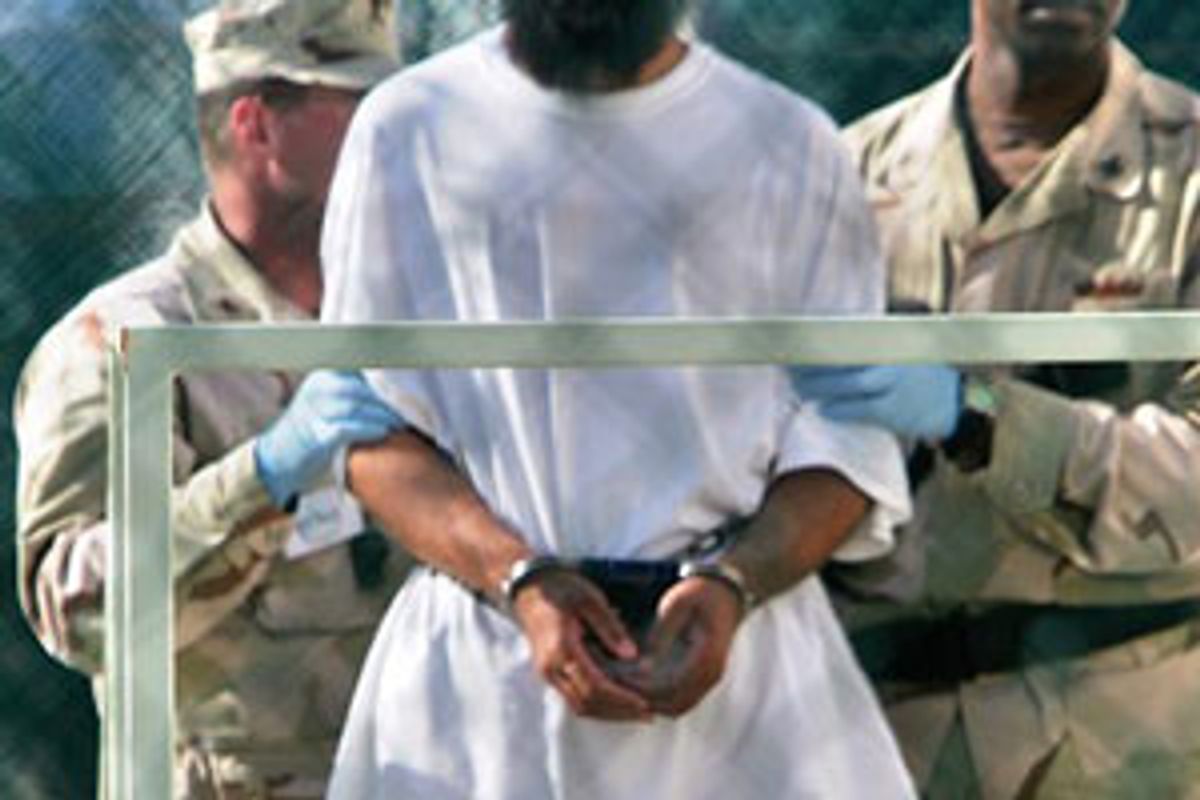 Human rights advocates have long suspected a link between interrogations in the "war on terror" and a secretive military survival school that trains elite U.S. troops to resist torture. Jane Mayer explored the evidence of a connection between the Survival, Evasion, Resistance, and Escape school at Fort Bragg, N. C., and real-world interrogators in a July 2005 piece for the New Yorker. Now Salon has the first hard proof of that connection, via one document buried among 1,000 pages obtained by the American Civil Liberties Union through the Freedom of Information Act. A March 22, 2005, sworn statement by the former chief of the Interrogation Control Element at Guantánamo said instructors from SERE also taught their methods to interrogators of the prisoners in Cuba.

"When I arrived at GTMO," reads the statement, "my predecessor arranged for SERE instructors to teach their techniques to the interrogators at GTMO ... The instructors did give some briefings to the Joint Interrogation Group interrogators."

"This is the missing link," declared Leonard Rubenstein, executive director of Physicians for Human Rights. "It is proof that the SERE training was in fact used, for a time at least, as a basis for interrogations at Guantánamo." "That is what I inferred had happened," agreed retired Brig. Gen. Stephen Xenakis, former commanding general of the Southeast Regional Army Medical Command, "but I have never seen this documented anywhere." The sworn statement suggests that Fort Bragg was the incubator of the abuse that later migrated from Guantánamo to Abu Ghraib, and is further evidence of the systematic nature of torture in the war on terror.

The interrogations chief, whose name is redacted, but who is listed as serving at Guantánamo from December 2002 until June 2003, asserts that instructors from the SERE school taught techniques to interrogators at Guantánamo sometime before his arrival, a period when the Department of Defense was developing some of the aggressive and controversial interrogation protocols that later surfaced in Iraq. The statement was produced as part of an investigation by Air Force Lt. Gen. Randall Schmidt into alleged "degrading and abusive" treatment of prisoner Mohammed al-Khatani, the so-called 20th hijacker.

There are striking similarities between the reported detainee abuse at both Guantánamo and Abu Ghraib and the techniques used on soldiers going through SERE school, including forced nudity, stress positions, isolation, sleep deprivation, sexual humiliation and exhaustion from exercise. The unnamed interrogation chief from Guantánamo notes in his statement that on his watch detainees were exposed to loud music and yelling. "The rule on volume," he said, "was that it should not be so loud that it would blow the detainees' ears out." The chief claimed interrogators would crank up the air conditioning to make detainees cold, and that one prisoner was also given a "lap dance" by a female interrogator "to use sexual tension in an attempt to break a detainee." The interrogator was later told not to do it again. One high-value detainee, he recalled, was subjected to "mental anguish."

The Army declined Salon's request for an interview with a SERE official. But an Army spokeswoman officially denied that such training is taking place. "We do not teach interrogation techniques," Carol Darby, chief spokeswoman for the U.S. Army Special Operations Command at Fort Bragg, insisted in an e-mail. "Interrogation policy and techniques are taught by other military schools."

Darby called SERE school training "sensitive." "We do not discuss the tactics, techniques and procedures taught in that course," she wrote.

According to those who have completed the training, however, the secretive "Level C" SERE course at Fort Bragg, which "inoculates" elite troops against the extreme measures that might be employed by enemy interrogators, is composed of three stages over a period of three weeks. The first week is classroom instruction on tactics for surviving behind enemy lines and evading capture. Then, during the second portion of the training, students are literally set loose in Fort Bragg's sprawling woods for up to a week to try to evade instructors hunting them. After the students are captured, they are taken to a fake concentration camp, where they are subjected to mock interrogations and simulated torture for the final week.

A retired Army Ranger who passed the SERE course in 1994 agreed to discuss his experiences in detail. He asked that his name not be used because he still does business with the federal government. He described the captivity portion of the course as among the most challenging periods of his 20-year career in the Army, which included combat missions. He said the instructors are experts at figuring out people's physical and mental breaking points. "We were told that it will happen," the Ranger said, "that everyone breaks sometime."

When soldiers are brought to the mock prison, already sleep-deprived and hungry from a week on the run, they are isolated in rows of small pens too small to fully recline or stand up. They are kept awake for days, moved about with bags on their heads, stripped naked and interrogated using techniques to provoke humiliation and shame.

"They had me remove my clothes" in the interrogation room, the Ranger said. A bag was put over his head, and a woman began speaking. " 'You are fat,'" he remembered her saying. "'You have the smallest dick I have ever seen.'" He called the experience "humiliating and degrading."

Instructors at the SERE school pour water over the hooded prisoners, creating the sensation of suffocation. "If you have ever had a bag on your head and somebody pours water on it," the Ranger recalled, "it is real hard to breathe."

Stress positions -- a term so often cited in investigations of wartime detainee abuse it has nearly entered common lexicon -- are often employed at SERE school. Soldiers are forced into a squatting position with both palms facing up, or an excruciating half crouch with arms extended out straight, called the Iron Man. After a while, "Your legs go numb. Your knees go numb. Your feet tingle," the Ranger said. "It feels like fire. Eventually, you can't hold yourself up."

Mock prisoners at SERE school get kicked and slapped with an open hand. They are forced to "low crawl" through mud and dirt at the fake prison and get constant "PT," or physical training -- exercise -- to wear them out. Without access to a bathroom, prisoners urinate and defecate in their clothes.

In addition to sexual humiliation, psychological duress is a big part of the program and comes in a variety of flavors, including an overall assault on a soldier's values. Mock interrogators desecrated an American flag, stepped on a copy of the Constitution, and "kicked the Bible around," the Ranger said -- an echo of the abuse of the Koran alleged at Guantánamo. Soldiers were ridiculed for their lack of knowledge of the Constitution and U.S. history. "They begin to preach propaganda and attack your institutional base," the Ranger said. "Everything about SERE school is a mind fuck."

Those physical and mental techniques mirror the treatment of some detainees at Abu Ghraib. The shocking photos from Abu Ghraib show prisoners stripped naked, with bags on their heads and forced into stress positions, like crouching for long periods or holding heavy boxes. Prisoners were regularly PT'd, or exercised by military police, to tire them out. Some were taken outside the prison and forced to low-crawl through the mud, according to military police statements.

Somewhat less is known about the details of the treatment of detainees at Guantánamo. But what is known -- including the statement of the interrogation chief and the interrogation logs of al-Kahtani -- reveal many striking parallels with what happened in Iraq. "[But] for the lack of a camera, it would sure look like Abu Ghraib," said Lt. Gen. Schmidt, according to a transcript of a conversation he had with an Army inspector general who was conducting his own, separate review of the treatment of prisoners in Cuba.

And, in turn, what happened to Kahtani also looks a lot like what happens at SERE school. Kahtani's sleep was often limited to four hours between his 18-to-20-hour interrogations. He was repeatedly humiliated: forced to stand naked in front of a female interrogator, accused of being a homosexual, forced to wear women's underwear and perform "dog tricks" on a leash -- treatment later found to be "degrading and abusive" in a military investigation. He was hooded. Denied access to a latrine, Kahtani urinated in his pants and was frequently exercised. Kahtani had water poured on his head. His logs also show interrogators "ridiculing" him for being unfamiliar with parts of the Koran.

The parallels between the SERE course and Guantánamo are remarkable, with the important exception of duration. So great are the psychological burdens of that final week of captivity training at SERE school, graduates are given a week off afterward to recuperate while they are carefully monitored by military mental health professionals. Kahtani was interrogated for up to 20 hours 48 times over eight weeks. As of April 2006, his name still appeared on a list released by the Department of Defense of prisoners who remain at Guantánamo.

Schmidt's report concludes that Maj. Gen. Geoffrey Miller, the former commander at Guantánamo, should be "admonished" and "held accountable" for Kahtani's treatment. Miller's commanding officer later rejected a punishment. By then Miller and the SERE techniques had both already moved to Abu Ghraib. This despite the unnamed interrogation chief's cryptic comment in the sworn statement that both he and Maj. Gen. Miller "didn't believe the [SERE] techniques were appropriate."