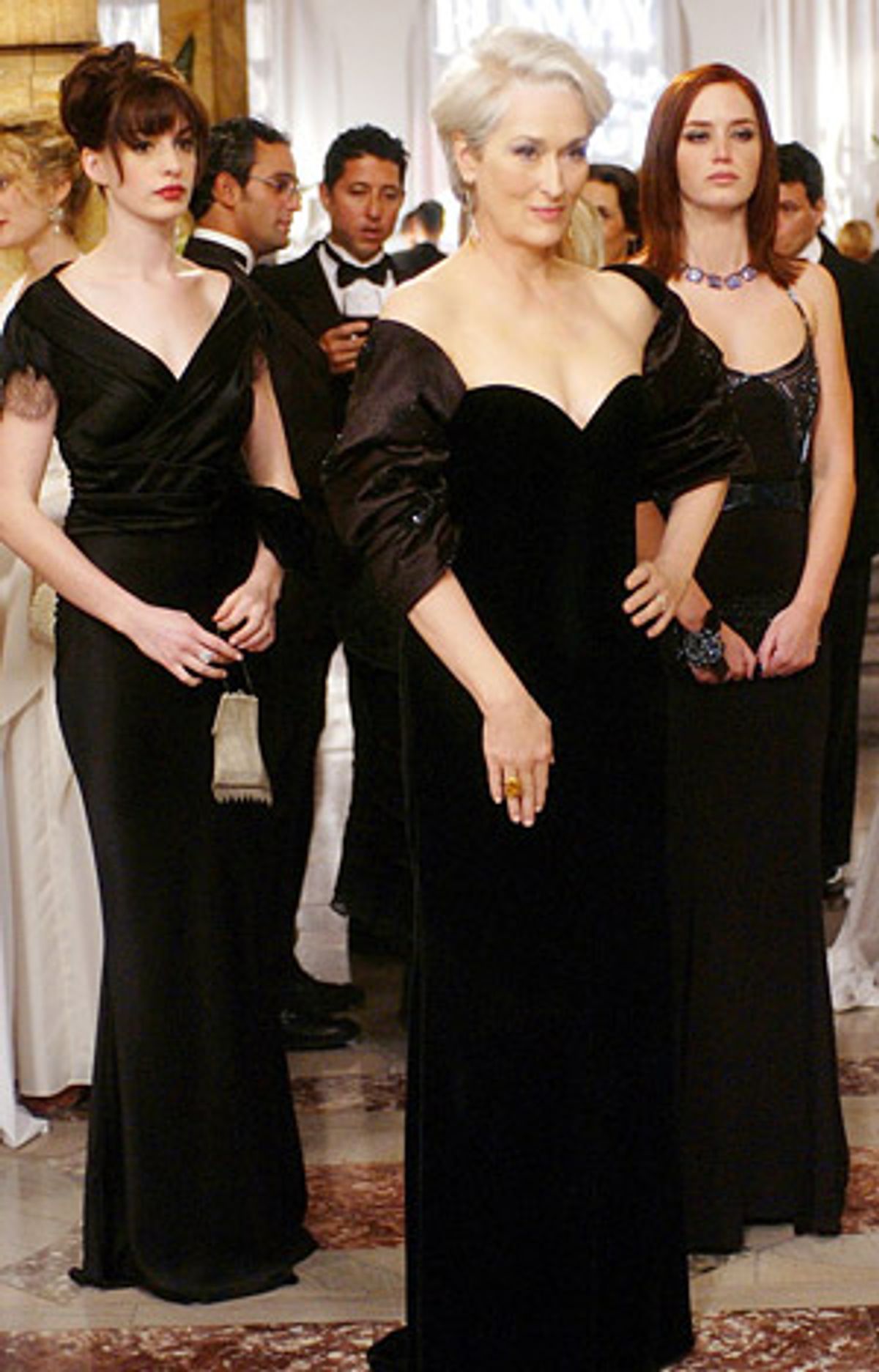 David Frankel's "The Devil Wears Prada" is probably supposed to be half fashion fantasy, half satire of the fashion world. What a drag that it's not enough of either. Its heroine, Andy Sachs (Anne Hathaway), is a sweet, cornfed, non-fashion-obsessed recent college graduate who miraculously (and inexplicably) lands a job as an assistant to the most formidable fashion-magazine editor in the land, Miranda Priestly (Meryl Streep). The magazine is called Runway (read: Vogue), and when Andy shows up for her first day of work, she's wearing the kind of college-girl garb that was out of fashion 20 years ago, a crewneck sweater and plaid-skirt get-up that might have looked OK for cycling around the Wellesley campus circa 1965. Miranda and Andy's snobby, recently promoted co-worker, Emily (Emily Blunt), scrutinize her, their nostrils flaring with disgust, as if her offense were more olfactory than visual.

In the code of mainstream filmmaking -- a code that offers pleasure as often as disappointment -- that must mean that Andy will undergo some sort of fabulous fashion transformation: Soon, we'll get to see this already astonishing-looking girl in the most beautiful clothes in the world, put together with the innate style we just know lurks inside her, ready to blossom. (To dip even a toe into the fantasy that "The Devil Wears Prada" presents, we need to ignore the fact that Andy is extraordinarily easy on the eyes to begin with.) We'll also get to relish Miranda's pure evil: How can we not sympathize with poor Andy, the ink barely dry on her freshly minted college degree, as she runs endless menial errands that often keep her on call until 2 a.m. (among them, fetching lattes that must still be steaming hot by the time they reach Miranda's lips)? Miranda rarely even calls Andy by her own name, preferring to call her by the name of her old assistant: To her, all underlings are interchangeable.

All of that stuff should be great fun. It should also help us work up at least a mild lather of outrage: To an extent, "The Devil Wears Prada" is an accurate reflection of workplace reality, at least in the magazine-publishing world, in that now more than ever, kids just out of college are forced to work at menial jobs that may not help them develop the skills they need. The harsher reality is that most recent college grads who hope to work in journalism have to take unpaid internships to get any experience at all. At least Andy gets a salary -- admittedly a tiny one -- for fetching all those lattes. And then there are all the glorious "free" clothes she gets to wear (more on these later). The violin of pity we're expected to play for Andy's plight gets tinier and tinier.

But even if we're not expecting strict adherence to realism in "The Devil Wears Prada" -- and we shouldn't -- the movie never quite finds its footing, or its tone. Frankel has directed numerous episodes of "Sex and the City," and he also made the sweetly entertaining 1995 comedy "Miami Rhapsody." "The Devil Wears Prada" is based on the novel by Lauren Weisberger, who drew from her own personal crypt of horror: She herself formerly worked for the infamously demanding editor of Vogue, Anna Wintour. But Frankel and screenwriter Aline Brosh McKenna rarely hit the right beats. The arc of Miranda and Andy's relationship needs to have some of the same rhythms of romantic comedy: These two are never going to fall in love, but they at least deserve some banter, and the script deprives them of it. Mostly, we're asked to feel great sympathy for Andy because her situation is so far from her hopes and desires. Andy wants to be a "real" writer, not a fashion type, and she shows obvious disdain for her co-workers at the magazine, having decided she's above it all. And while her co-workers are pretty nasty, she's really just engaging in unflattering self-pity for being stuck at the bottom of the food chain.

Runway's bigger-than-life but not-bigger-than-Miranda art director, played by Stanley Tucci, rightly excoriates her for this, wiggle-waggling his finger at her -- perhaps only to show off the giant Tibetan silver ring he's wearing, Diana Vreeland-style, but at least he's talking sense. Mostly, though, the Runway staff seems to run on nothing but bitchery. Although I've never worked at a fashion magazine, my understanding is that bitchiness is part of the reality. But in terms of this movie's universe, if these people weren't portrayed as strictly shallow and "dumb," then Andy would have no one to feel superior to. And Frankel might have had to do the work of making a subtler, slyer picture.

Streep's Miranda, an icy queen bee in a swooping, snow-white bob, gets a terrific entrance: She sweeps into the Runway office in a flurry of lush, swinging foxtails, a blizzard of authority and energy. Streep is mostly great fun to watch: She's such a gifted comic actress that it's pleasing to register every arched eyebrow, every disdainful half smile. But ultimately, the role doesn't demand much of her. Even when the movie reaches its inevitable "bitches are people too" climax, Miranda doesn't offer us much: We get a window into her private heartbreak, but the revelation tells us only that she feels bad when lousy things happen to her. That's intensely human -- but it's nothing that demands the badge of sympathy the movie wants us to award her. Streep would have been better, and the movie more fun, if she'd been conceived and played as an even bigger shrew on wheels -- or in Manolo Blahnik heels.

That would also have given Hathaway's Andy more to work against. Hathaway is a very pretty actress, and her perceptive performance in "Brokeback Mountain" -- in a severely constrained role -- suggests she has more to offer than we've seen in her big hits, "The Princess Diaries" movies. But the last thing Hathaway should be doing right now is coasting in movies like these: Her voice is tinny and wearisome, and even as we're supposed to be hoping that someday Andy will be able to escape the horrors of her job, we're also wondering when we'll be set free from the clutches her pinched vowels. The role is written to reinforce Andy's victimization: She's treated terribly by Miranda (whose tics include flinging her coat and purse on the assistant's desk every morning, without even the barest "hello"), but even in the face of Miranda's worst excesses, Andy never speaks up. Sure, she fears she'll lose her job. But why can't she have at least a little fighting spirit? If she's this much of a pushover in this admittedly very demanding job, you wonder what kind of reporter she's ever going to be.

To Andy, the world of letters is far more important than fashion. Meanwhile, the rest of us are left wondering: So what about the clothes? My guess is that most people who venture out to see "The Devil Wears Prada" are curious about them.

You'd expect the fashion in "The Devil Wears Prada" to be spectacular, particular since Hathaway, whose figure is voluptuous and willowy at once, is bound to look great in pretty much anything. (The movie never explains how Andy gets these amazing clothes. I think we're supposed to infer that they're borrowed from the magazine's vast and constantly replenished stock of designer wear, which, in this movie at least, is open to even the lowliest assistant.) But the outfits, with the exception of a rapid-fire montage in which Hathaway sports everything from '60s-style tweed newsboy caps to spy-girl trench coats to sleek, over-the-knee boots, are a bummer. The costuming here is by the much lauded Patricia Field, a longtime fixture of the downtown New York scene. Over the years Field's various retail outlets have offered, among other things, large-size platform shoes and psychedelic-colored wigs for transvestites. That's a far more valuable service to society than the gig for which she's gained her widest acclaim: She's the costumer responsible for the increasingly outlandish (and often absurdly unflattering) get-ups worn by the stars of "Sex and the City" during that show's run.

Field doesn't go quite so wild here. But she does put Andy into a few outfits that tread too boldly into fashion-victim territory: It doesn't matter that that scoop-necked sweater, stretched awkwardly over a traditional white shirt and laden with garish chain necklaces, is by Chanel -- it's still fashion overkill. Are we supposed to be laughing at, or disapproving of, Andy's newfound (and temporary) interest in fashion, so we'll be proud of her when she moves on to worthier pursuits? Maybe. But then, Andy's character needs to show more sparks of intelligence, and more honorable chutzpah, than the movie allows her. No one likes a wet blanket. Not even one by Dolce and Gabbana.